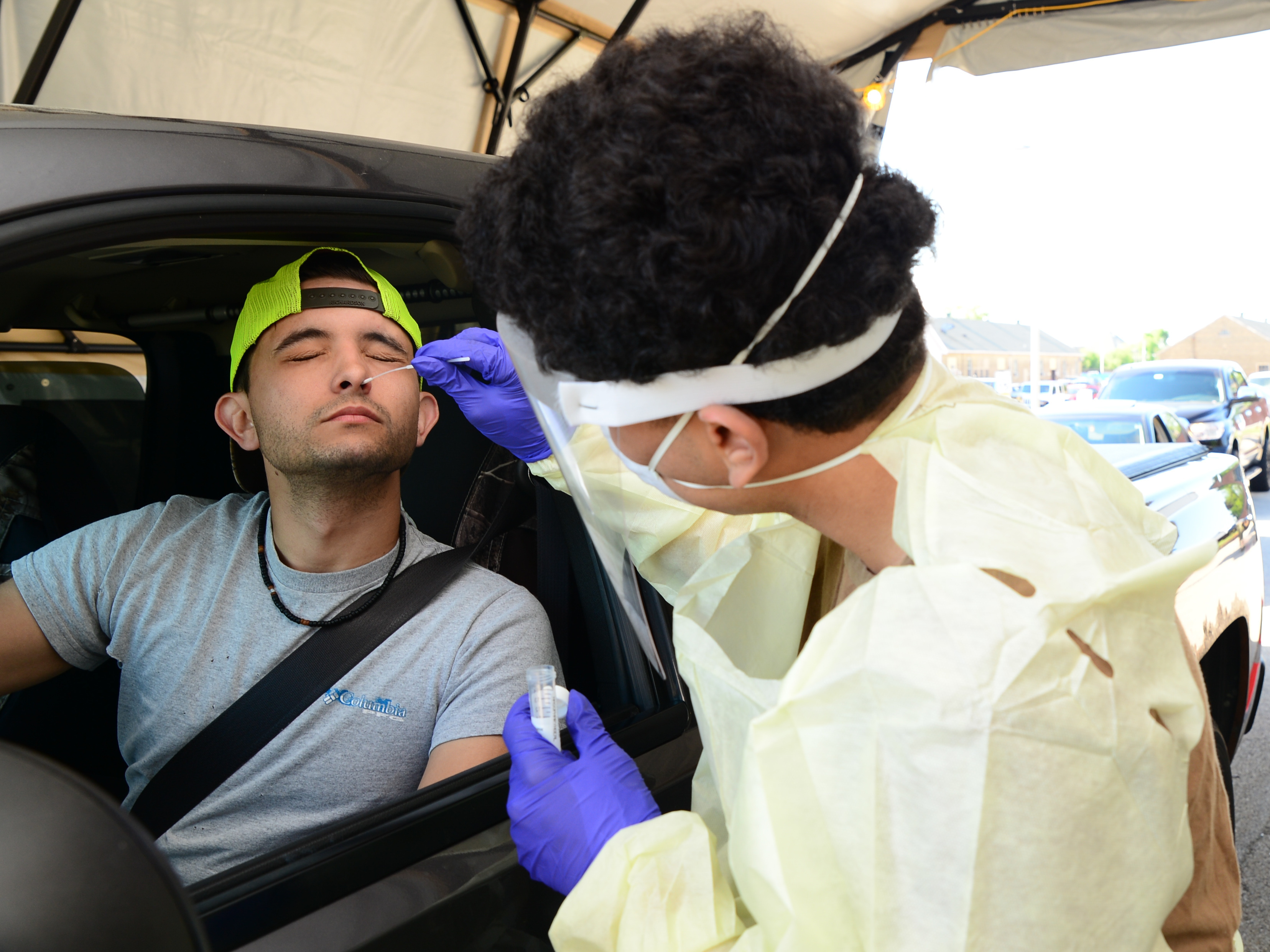 The Navy is in talks with the National Guard to rent space to quarantine recruits before they attend basic training, according to service officials.

Recruit Training Command in Great Lakes, Ill., has been housing potential recruits at nearby hotels, including at the Great Wolf Lodge Water Park near Chicago, for 14 days before they begin boot camp.

But Chief of Naval Personnel Vice Adm. John Nowell said June 25 that the service is exploring less expensive options than local hotels, which cost $1.1 million to house 500 recruits for two weeks prior to their training.

Nowell did not say which National Guard base the service is considering – the Illinois Army National Guard has several facilities near Chicago – but he said the effort is part of an overall push to conserve operations and maintenance funding during the COVID-19 pandemic.

“We do have some shortfalls there,” Nowell said, referring to the cost of quarantining recruits. “Congress passed the CARES Act and we were able to get some of that funding, but if you look across the fleet, the folks that do the resourcing and money for the Navy are working it very hard because there have been additional costs.”

USNI News reported at the beginning of June that the Navy had $3.4 million in contracts through September 30 to house each recruiting class for two weeks at area hotels, though the total amount spent and length of the contracts was subject to change depending on the Navy’s needs.

Nowell said the recruiting center also has constructed what he called an “expeditionary ship” in drill halls that will be used for temporary housing for anyone who tests positive for COVID-19, along with those exposed to the coronavirus.

The “expeditionary ship” temporary lodging in drill halls is a “backup to the backup,” of the off-base hotel facilities, according to RTC spokeswoman Lt. Kristina Wiedemann. The ship, which largely consists of a cubicle system with curtained “rooms” that each contain a cot, would be used in the event that overflow isolation capacity is needed, Wiedemann said.

The facilities aren’t currently in use, she said.

Similar to the Javits Center in New York, which was used as a field hospital initially to treat New Yorkers with non-COVID-19 illnesses but later expanded to take coronavirus patients, the Great Lakes “ship” is a stop-gap measure to augment medical facilities.

Navy officials say they will be able to dismantle the facility and store it for future use during a pandemic, he said.

“We’re trying to be smart. … When we get a vaccine and we’re done needing it for the current crisis, we can dismantle that and store it, and if there’s another pandemic then we can reconstruct it and not cost additional taxpayer dollars,” Nowell said. 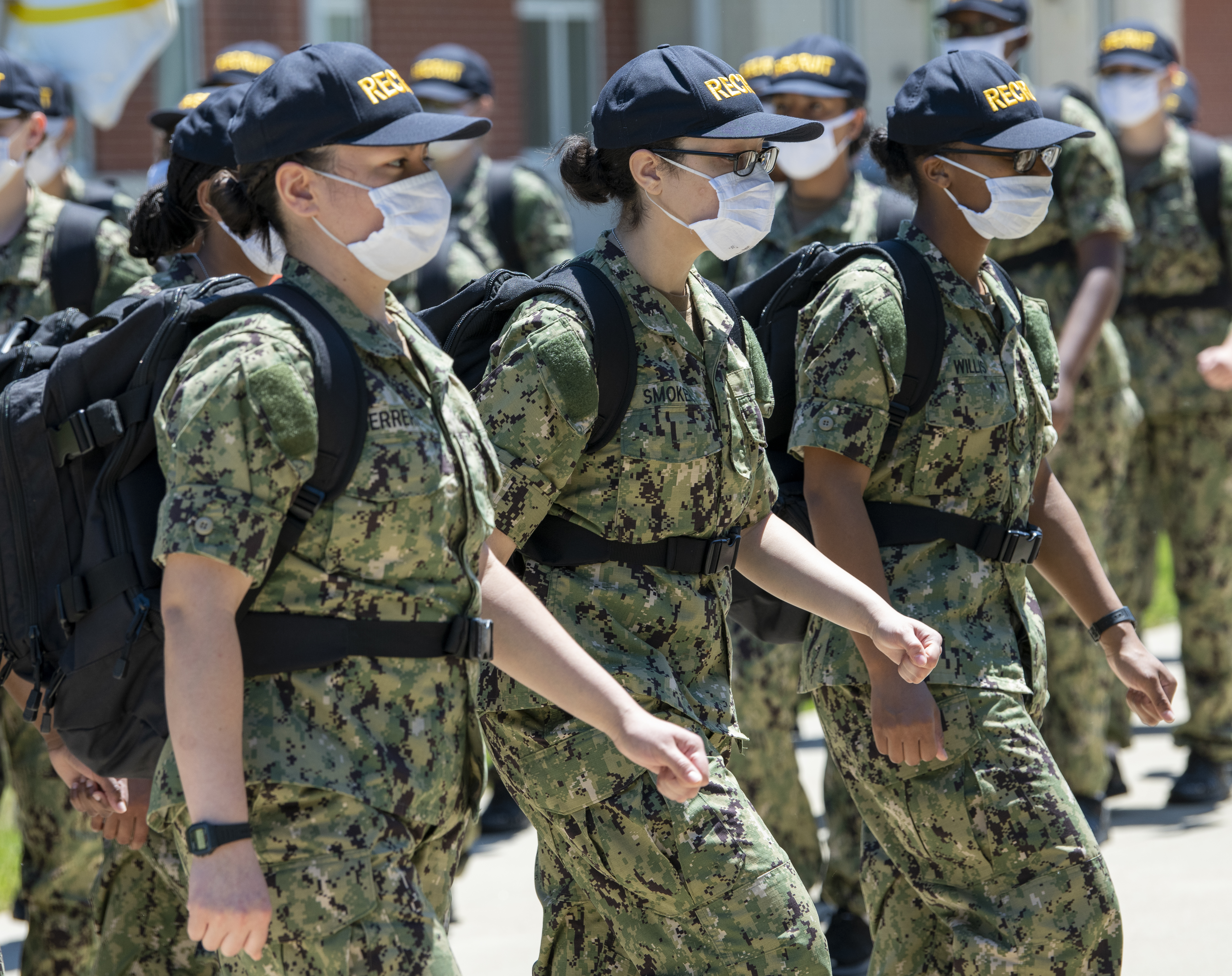 Recruits march in formation at Recruit Training Command on June 11, 2020. More than 35,000 recruits train annually at the Navy’s only boot camp. US Navy photo.

A Recruit Training Command spokeswoman declined to say how many new or potential recruits have tested positive for the coronavirus, citing Pentagon policy.

As of Monday, 3,534 sailors across the service have been diagnosed with COVID-19, and 290 service members – Army, Navy, Air Force, Marine Corps and National Guard – remain hospitalized.

The Navy stopped accepting new recruits at boot camp on March 30 after a recruit tested positive for COVID-19. The suspension lasted for three weeks and did not affect those already training.

Great Lakes reopened the pipeline three weeks later, allowing 500 recruits at a time to enter the 14-day quarantine before beginning basic training. The cadre was expanded in mid-May to 750 recruits.

While the recruits are in hotels, they receive their meals in their rooms and are prohibited from engaging in group activities. They are screened daily and required to maintain social distancing and wear face masks.

Across the Navy, commands are reminding Navy personnel of the restrictions they must adhere to even as states begin reopening for business.

Many installations remain under Health Protection Condition Charlie, which means that personnel are required to limit their activities to grocery shopping, medical appointments, child care services, prescriptions and getting gas.