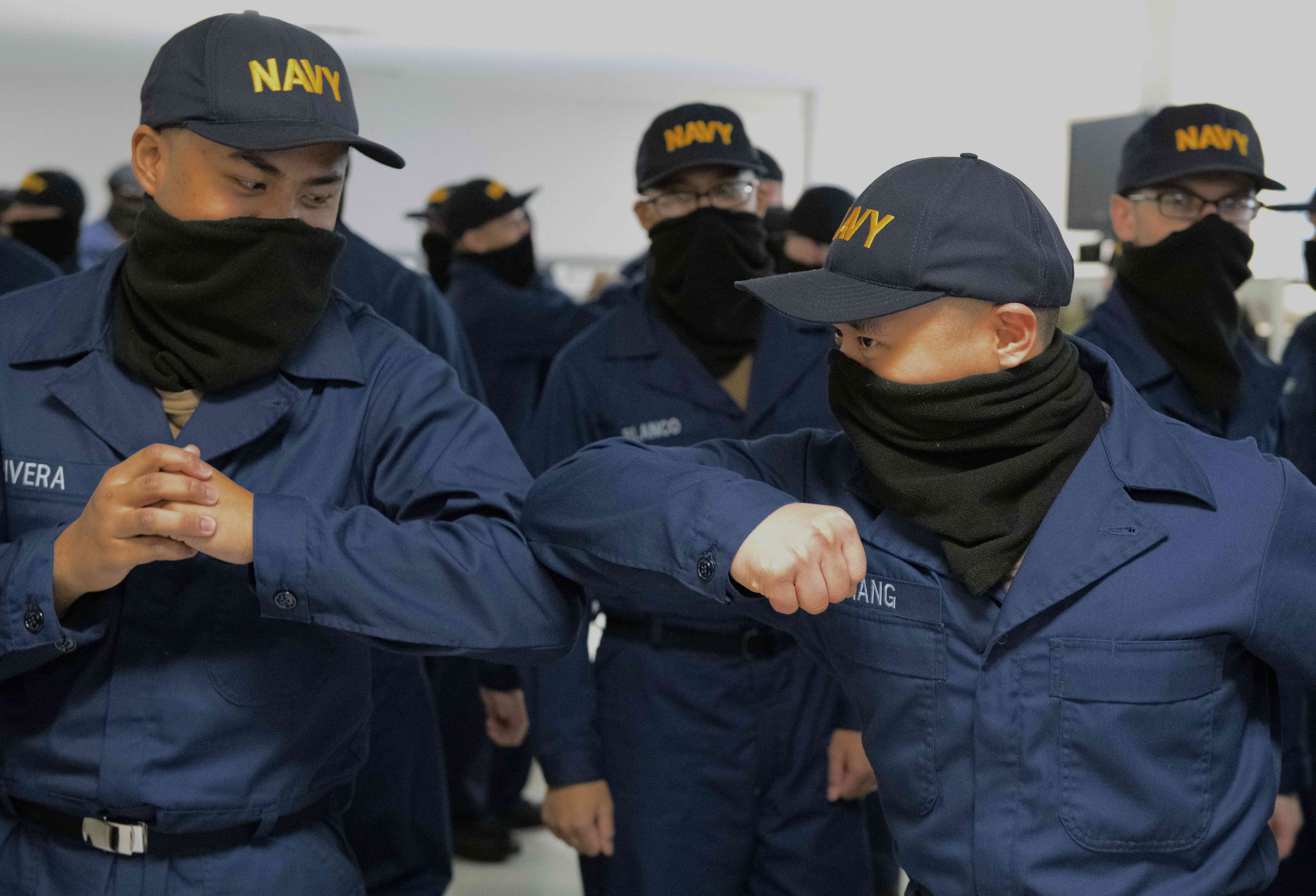 The Navy’s newest Sailors congratulate each other with elbow-bumps to minimize contact after a capping ceremony, marking their transition from recruit to Sailor, at Recruit Training Command. The Sailors recently completed “Battle Stations,” the crucible event that recruits must pass prior to graduation, testing their knowledge and skills in basic seamanship, watchstanding, damage control, firefighting and emergency response procedures. More than 35,000 recruits train annually at the Navy’s only boot camp. US Navy Photo

The Navy is confident its COVID-19 mitigation efforts are working well enough to increase the number of recruits arriving at boot camp to 750 per week.

Almost a month ago, the Navy started adhering to a strict protocol of limiting recruit classes to 500 people and placing them in a 14-day quarantine at a shuttered waterpark outside the Navy’s only boot camp, Chief of Naval Personnel Vice Adm. John Nowell said during a Friday call with reporters.

“It is mission essential,” Nowell said. “It is critical to get those apprentice sailors heading out to the fleet.”

The Department of Defense policy is to not release COVID-19 numbers at the command level, so Nowell would not provide a precise accounting of positive cases on base.

“I can tell you that the number there is very small and we are controlling this well enough that I’m very comfortable to telling the team to increase the number of shippers to 750,” Nowell said.

The Navy has to take extraordinary actions to keep the new sailor supply chain healthy and open, Nowell said. Currently, the Navy has between 10,000 and 11,000 open sea billets. Also, nearly 20,000 sailors either will be eligible to retire or will have reached the end of their contracts between now and April 2021.

The Navy’s ascensions goal of 40,800 sailors in Fiscal Year 2020 is designed to both cover the open billets and expected separations while also increasing overall force size. With COVID-19 restrictions already limiting the ability of recruiters to meet with prospects, the service can’t afford to risk another halt to its recruit training process.

On March 30, after a recruit tested positive for COVID-19, the Navy started what became a three-week shutdown of recruit deliveries to its Recruit Training Command at Naval Station Great Lakes.

Training for those already at boot camp did not stop during the three-week pause, Nowell said. Recruits already at Great Lakes continued with their programs while the Navy took time to refine its training procedures at Great Lakes.

Along with keeping recruits off the naval base for 14 days when they first arrive at training, Nowell said the Navy’s only boot camp instituted additional risk-mitigation measures. Before coming on base, 100 percent of recruits are tested for COVID-19, Nowell said. Recruits are more spread out than before, after the base built expeditionary barracks and converted two drill halls into barracks in case anyone tests positive for COVID-19 and needs to be isolated.

The Navy also increased staff on base, with additional medical technicians brought on to conduct contact tracing. The more than 800 recruit division commanders and other instructors are now sequestered on base, rather than being allowed to go home at night, to reduce the risk of contact with COVID-19.

“Basically, I deployed them, and we put them there on the base to minimize threat vectors coming in and out, and we call that putting them under the bubble,” Nowell said. “Then, we worked to sanitize the bubble.”

When recruits complete training, about one third remain in Great Lakes to attend follow-on schools. Other sailors attend specialized schooling, such as aviation training in Pensacola, Fla., or undersea training in Groton, Conn., Nowell said.

Getting new sailors to the fleet is considered mission essential, so the Department of Defense stop-movement orders are being waived. The Navy is also working to limit possible COVID-19 exposure while transferring sailors to their follow-on training.

If the COVID-19 exposure data continues showing a limited exposure to COVID-19, Nowell said he would consider further expanding the recruit classes to more than 1,200 people in July.

“That will be conditions-based. We won’t do it unless we think it’s safe to do it, but we think we’re on a glide slope to meet our ascension mission of 40,800 of new apprentice sailors this year,” Nowell said. “And that’s going to be essential for making sure we continue to work down those gaps at sea.”