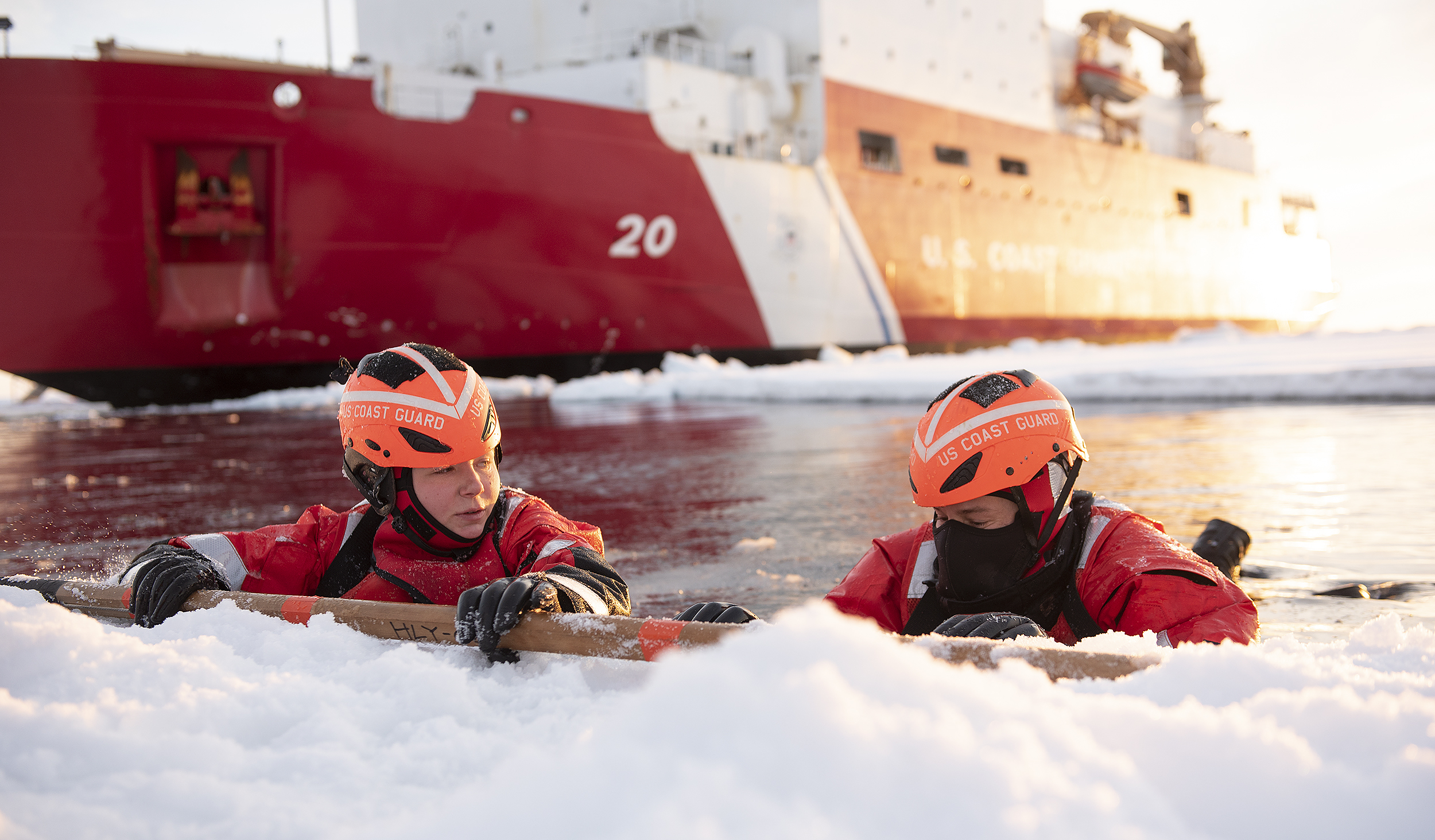 USNI News polled its writers, naval analysts and service members on what they consider the most important military and maritime stories in 2018. This story is part of a series; please also see U.S. Marine Corps Operations and U.S. Navy Operations.

For the U.S. Coast Guard, 2018 started and ended with news about the service’s new fleet of polar icebreakers.

However, securing funding for the heavy icebreaker program had been the Coast Guard’s top priority throughout the year, but as 2018 neared its end, funding the icebreaker remained in doubt. 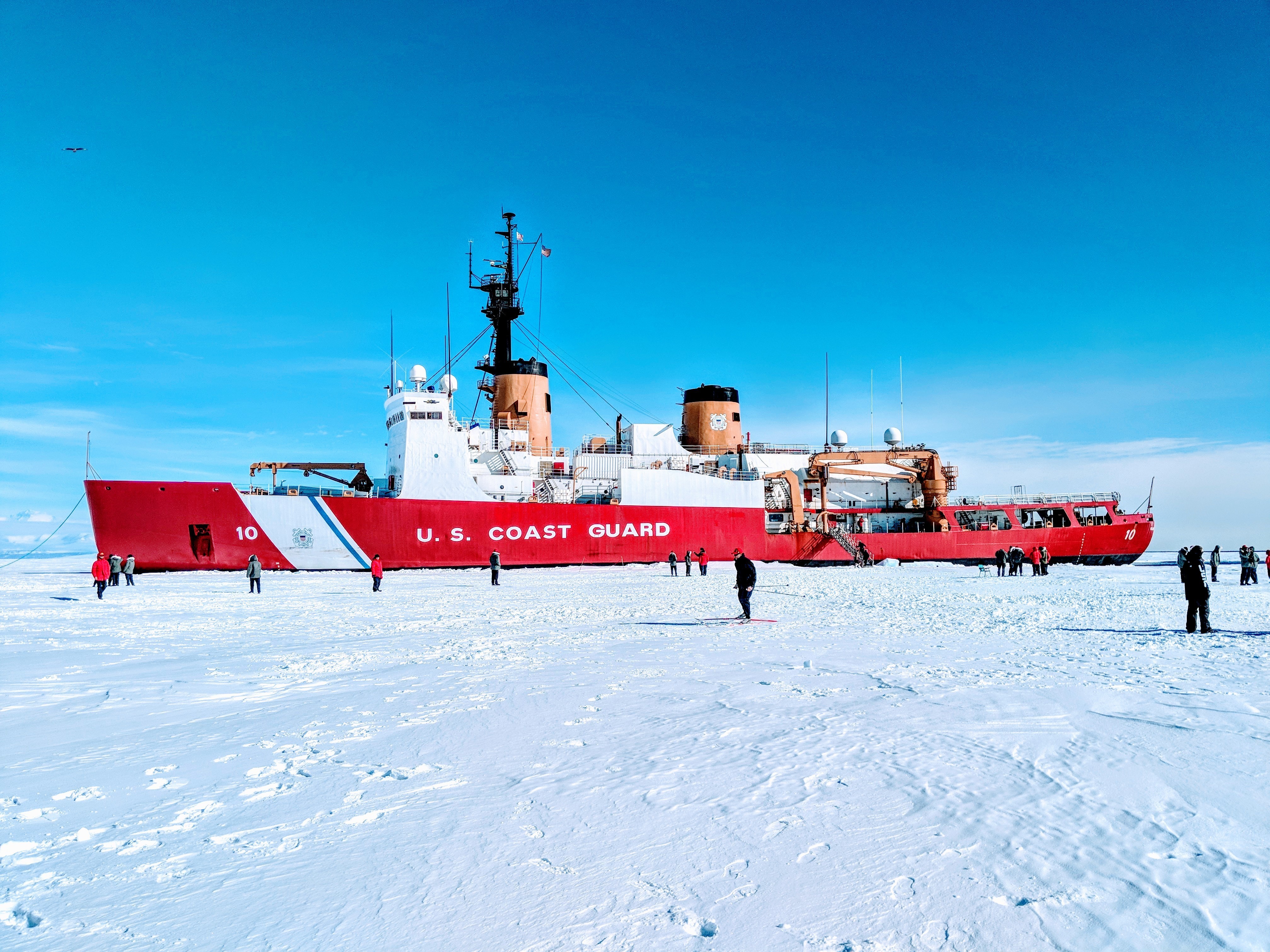 Now dubbed the Polar Security Cutter, the Coast Guard released its request for proposals for the long-sought new heavy icebreaker class in March.

At the time, five vendors were expected to submit bids to build the first new icebreaker, which the Coast Guard would like to launch in 2023. The Coast Guard currently only has one workable heavy icebreaker, the USCGC Polar Star (WAGB-10), which is more than four decades old.

Among the technological advances expected to in the new class of Polar Security Cutters is the propulsion system intended for the ships. The Coast Guard wants to use what’s called an Azipod propulsion system. The Azipod can rotate 360 degrees, making steering easier when going astern, a maneuver often used when icebreaking.

The proposed Fiscal Year 2019 Coast Guard budget, which falls under the Department of Homeland Security budget request, included $750 million to start the Polar Security Cutter program. However, while the Senate’s FY 2019 DHS appropriations bill contained funding for the icebreaker, the House version did not. Instead, the House bill included $5 billion for constructing a wall on the U.S. and Mexico border.

When FY 2019 started on Oct. 1, Congress had only approved a temporary funding plan for DHS and several other domestic agencies, opting to tackle the border wall issue after the November midterm elections. A second temporary funding bill expired at midnight on Friday, Dec. 21, with no new deal in place – causing a shutdown of several agencies, including DHS, and further delaying the possible start of the Polar Security Cutter program. 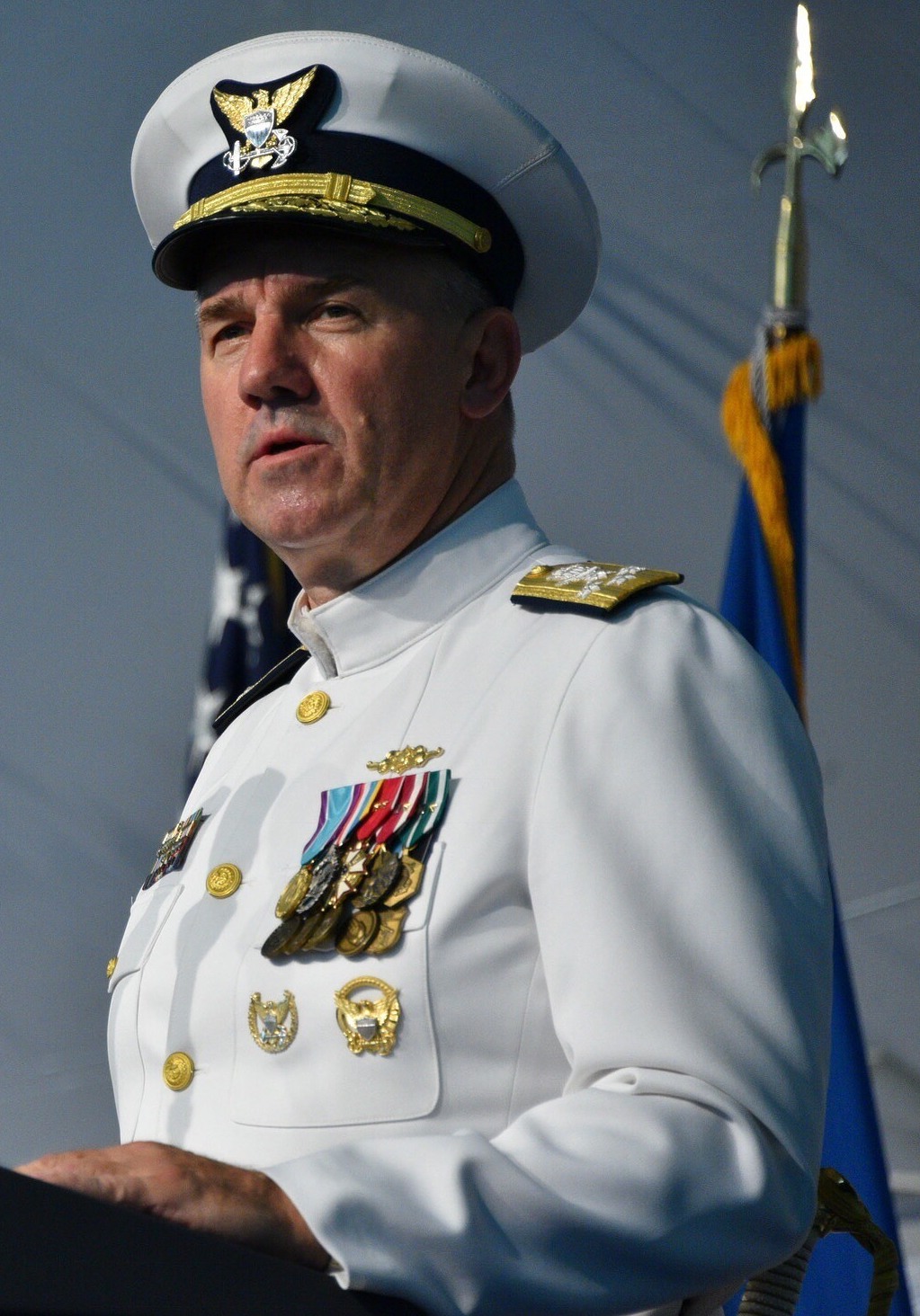 Adm. Karl Schultz was sworn in as the 26th Commandant of the Coast Guard in a June 1 ceremony.

Schultz took over the Coast Guard’s top job after having been the commander of the Coast Guard’s Atlantic Area, a region covering all Coast Guard operations from east of the Rocky Mountains to the Persian Gulf. In this role, Schultz led the Coast Guard’s efforts providing rescue and disaster relief during the destructive 2017 hurricane season, when a slew of named storms hit the U.S. mainland, Puerto Rico and the U.S. Virgin Islands.

Category 4 Hurricane Michael, which made landfall on Oct. 10 near the Eastern Shipbuilding yard, briefly delayed work on the OPC. By November, the yard was able to continue work on the first OPC, the future USCGC Argus (WMSM-915).

Eastern is also preparing to build the future USCGC Chace (WMSM-916) as part of the yard’s contract to build nine OPCs with options to build two more. Ultimately, the Coast Guard plans to buy 25 OPCs as part of a program that could be worth up to $2.38 billion.

The Coast Guard also commissioned its 28th Fast Response Cutter into service in July, with the service so far having received funding to build a fleet of 50 FRCs. The Coast Guard requested $240 million to build four more in FY 2019, which is still awaiting a final appropriations bill. 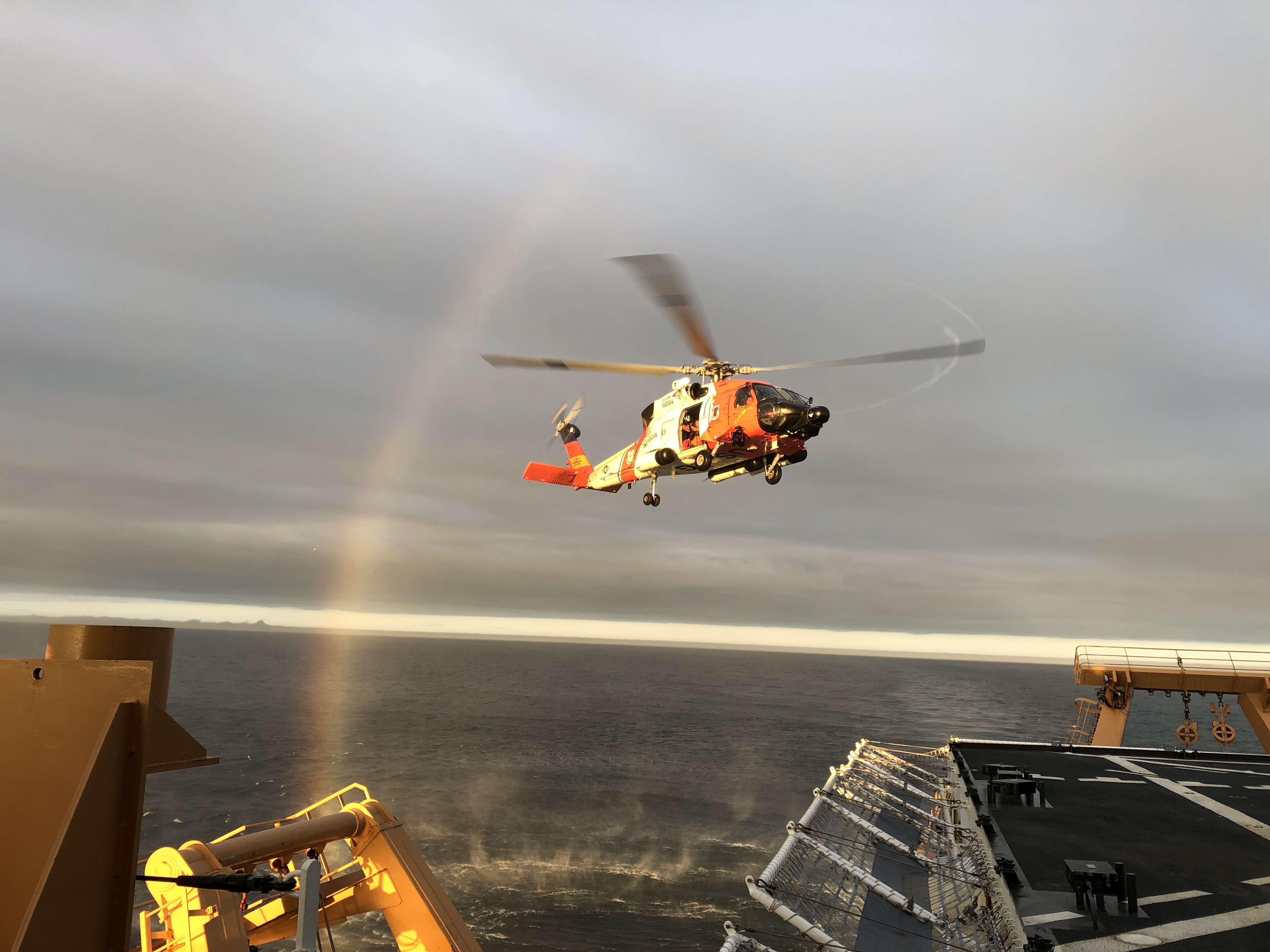 The Coast Guard, which started flying the Aerospatiale Helicopter Corp. MH-65 Dolphin in 1984, announced it plans to extend the life of its fleet of 98 Dolphins for another dozen years as it considers possible replacement aircraft.

In FY 2018, the Coast Guard received $20 million to upgrade the fleet of MH-65 Dolphins. The service also received $25 million to sustain and expand its fleet of 45 MH-60 Jayhawk helicopters, which includes refurbishing used Navy MH-60 Seahawks.

With fixed-wing aircraft, Congress funded the purchase of a C-130J cargo plane, expanding the Coast Guard’s fleet to 15. The Coast Guard also fielded its first C-27J Spartan aircraft. The Coast Guard inherited a fleet of 14 C-27Js from the Air Force in 2014 and just finished refurbishing the first of the planes to fit Coast Guard missions.

In June, the Coast Guard awarded Boeing subsidiary Insitu a $117-million contract to provide the ScanEagle unmanned aircraft system operations on National Security Cutters. ScanEagles can fly for more than 24 hours, cruising at 55 knots and with a maximum speed of 90 knots. ScanEagles are shot into the air by a pneumatic launcher and recovered using a hook and arresting wire. 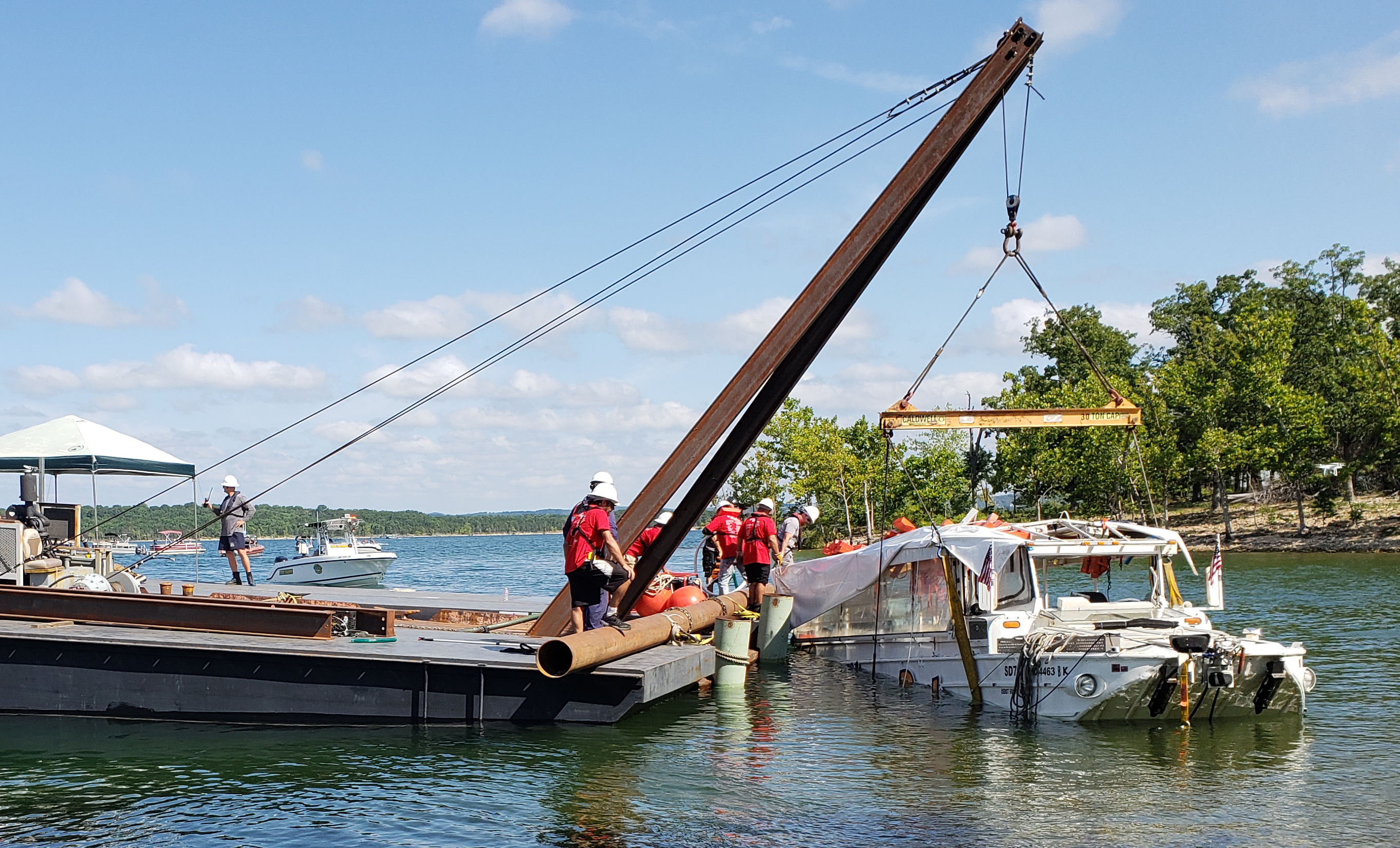 The 2018 storm season was active but not as bad as the 2017 storm season. Coast Guard units were deployed to assist with disaster relief efforts in North Carolina in September, ahead of Hurricane Florence.

In August, the Coast Guard joined the search for a missing sailor assigned to cruiser USS Lake Erie (CG-70) while the ship was operating off the coast of California.

Coast Guard personnel also partnered with the Navy during the summer patrolling fishing areas in the Oceana region of the Pacific. A Coast Guard law enforcement detachment aboard Arleigh Burke guided-missile destroyer USS Shoup (DDG-86) helped protect fishing rights of various nations during a patrol through the region. Many small Pacific island nations do not have the means to patrol their territorial waters and rely on U.S. Navy and Coast Guard patrols to enforce international laws.

In August, the Coast Guard convened a formal Marine Board of Investigation into the deadly July 19 sinking of an amphibious duck boat tour vessel on Table Rock Lake in Branson, Mo. When the duck boat sank during a severe storm, 17 passengers drowned in what is one of worst duck boat accidents to occur since the WWII-era boats were transformed into tourist vehicles. When the duck boat was lifted from the lake, orange life preservers were still affixed to the canopy. The Coast Guard referred the investigation to federal prosecutors “to consider a potential criminal investigation and federal prosecution,” according to an article published by the Associated Press.

The National Transportation Safety Board is leading a parallel marine casualty investigation into the incident, which is ongoing.