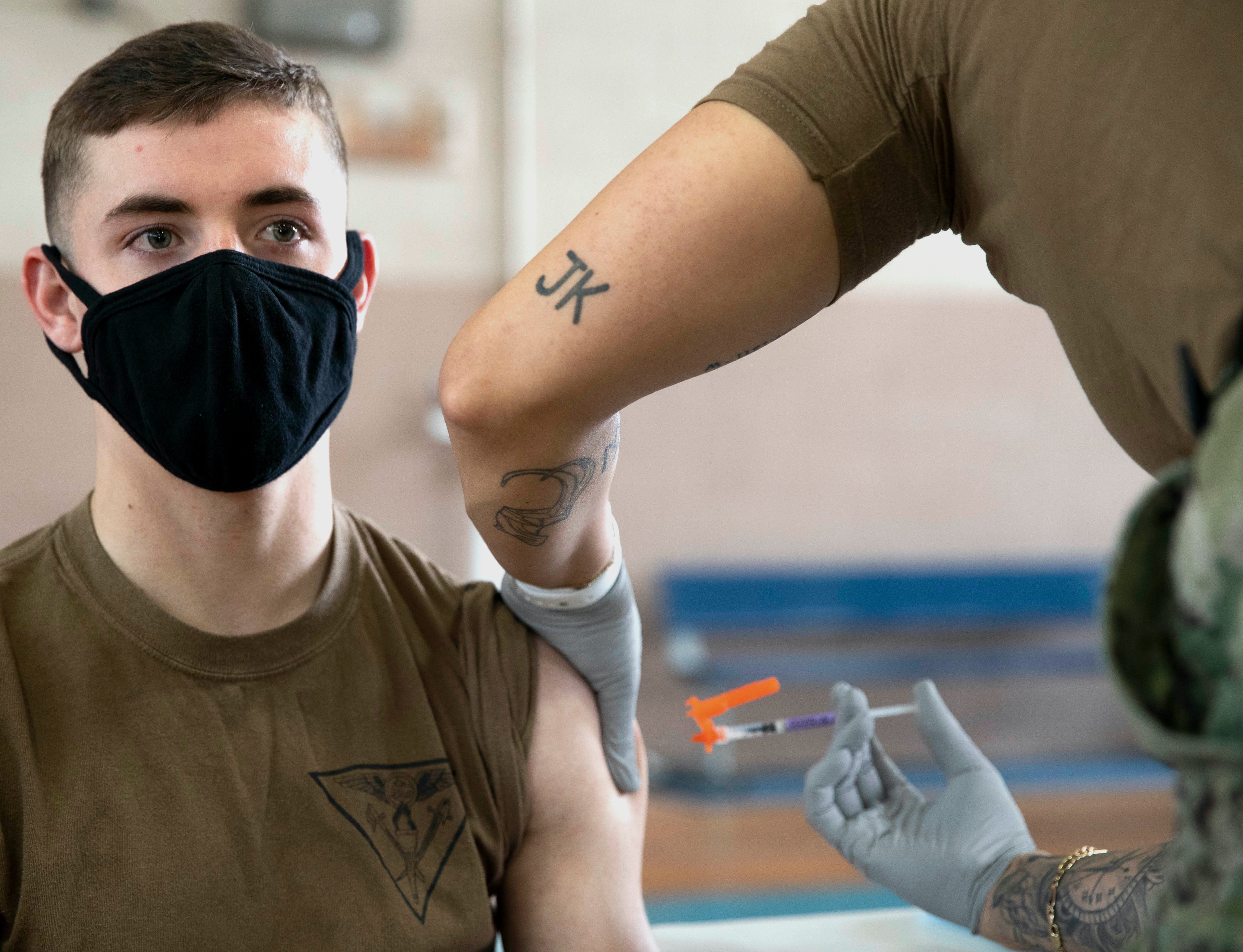 The Navy can now begin to separate active-duty sailors who refuse to be vaccinated against COVID-19, according to Navy guidance released Wednesday.
Active-duty sailors who refused to get the vaccine were set to be separated if they continued to refuse, according to previous guidance, but commanders were not able to process separations until further clarification that was included in Wednesday’s NAVADMIN.

Sailors who are able to retire or separate on or before June 1 will be able to do so through an expedited process instead of an administrative separating process, according to the NAVADMIN. These sailors will receive an honorable discharge unless there are extenuating circumstances.

Sailors who are not eligible for retirement or separation by June 1 will be processed for administrative separation as soon as practical on the basis of misconduct.

Those with less than six years of service will be given an honorable discharge and do not go before an administrative separation board or board of inquiry.

Sailors with more than six years of service will go to an administrative separation board, where they can receive no lower than a general discharge, which limits some post-military benefits, including education funding.

However, sailors can instead request to waive their boards and instead be separated with an honorable discharge, according to the NAVADMIN.

Sailors who are separated because of vaccine refusal will not be eligible for involuntary separation pay, according to the guidance. Those who have a service obligation from receiving educational funds through Naval Reserve Officers Training Corps or other scholarship or attending the Naval Academy will be required to repay their educational costs.

While the NAVADMIN lists June 1 as the separation date for those who refused the vaccine, there is no deadline for when the fleet will be 100 percent vaccinated, with the exception of those who are exempted, said Rear Adm. James Waters III, director of military personnel, plans and policy during a media call.

Sailors who have decided to get the vaccine but missed the Nov. 28 deadline to be fully vaccinated could still face administrative repercussions, Waters said. Those sailors will have their cases handled, individually, by COVID Consolidated Disposition Authority (CDA) Vice Adm. John Nowell Jr.

“Let me be clear up front. We want every sailor to receive the vaccine and stay Navy,” Waters said. “And if a sailor gets their shot, we will honor that and make every effort to retain them.”

Sailors were given counseling on the value of the vaccine and counseling from medical professionals, Waters said. The Navy also used social media to encourage vaccination.

The majority of the Navy has gotten the vaccine and met the deadline, said MyNavyHR Fleet Master Chief Wes Koshoffer.

Although there is no official data on why some sailors continue to refuse, Koshoffer said that in general it falls under two camps: those who are hesitant about the vaccine’s safety and efficacy and those who have religious beliefs against vaccinations.

Despite these concerns, it is important to note that mandatory vaccinations are not new to the Navy, he said. Vaccine mandates extend back to 1848, USNI News previously reported.

The fleet has to be fully vaccinated, outside of exemptions, in order to meet the Navy’s mission, he said.

Those who are exempted from the vaccine, due to medical or administrative reasons, will have their positions limited because they are unable to perform certain aspects of the mission without being protected against COVID-19, Koshoffer said.

Those who are being separated for refusing the vaccine are being met with respect, Waters said. They are being labeled as “Navy service member refusing vaccine” to prevent them from being cast with a scarlet letter.

The Navy is not the first military branch to begin separating those who refuse the vaccine. The Air Force separated 27 airmen for not obeying the vaccine mandate, The Washington Post reported. Last week, the Navy removed the executive officer from USS Winston S. Churchill (DDG-81) over refusing to get vaccinated.

Although the military as a whole will be losing personnel who do not follow the mandate, it is important to keep the number relative to the size of the military and the number of discharges that happen on an annual basis from retirements and those not reenlisting, Pentagon Press Secretary John Kirby said during a Tuesday press conference.

“So when it comes to readiness, our interest is on making sure that we get as close to 100 percent vaccination as possible so that the force can be protected,” Kirby said. “That’s the concern.”