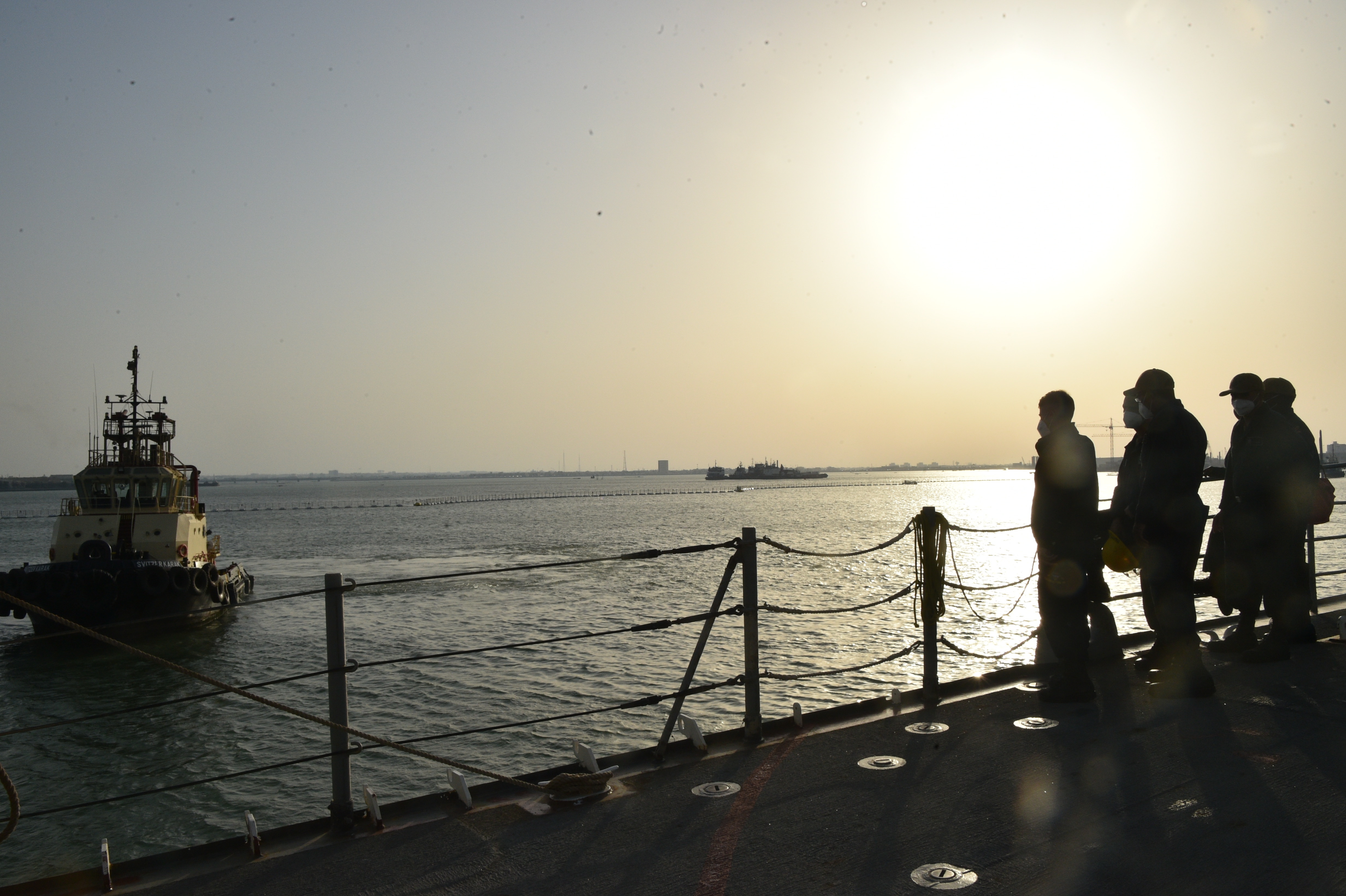 Sailors assigned to guided-missile cruiser USS Philippine Sea (CG 58) prepare to depart Manama, Bahrain, during a sea and anchor detail, March 21, 2021. Philippine Sea is deployed to the U.S. 5th Fleet area of operations in support of naval operations to ensure maritime stability and security in the Central Region, connecting the Mediterranean and Pacific through the western Indian Ocean and three critical chokepoints to the free flow of global commerce. US Navy photo.

Cruiser USS Philippine Sea (CG-58) has returned to sea fully mission capable after spending nearly a month in port in Bahrain to deal with COVID-19 cases within the crew.

The ship pulled into Manama, Bahrain, on Feb. 26 after several crew members were suspected of having COVID-19. The entire crew was tested, and about 20 personnel tested positive.

After isolating sick crew members and those deemed to have been in close contact with sick personnel, Philippine Sea was able to return to sea again on March 21.

“The immediate care, assistance, and overwhelming support extended by the Kingdom of Bahrain and the Bahrain Ministry of Health, the U.S. 5th Fleet Staff and Medical Teams, and Task Force 55 was awe inspiring,” Capt. Kevin Hoffman, the commanding officer of Philippine Sea, said in a statement.
“This collective team of dedicated professionals provided all of the aid necessary to allow Philippine Sea’s sailors to return to sea, fully mission ready.”

“The strength, commitment, and resilience of this crew remain the key to Philippine Sea’s success and we’re once again ready to support any and all operational tasking,” he added.

While in port, the crew was tested, those in need of isolation or quarantine were moved off the small ship, and the first dose of the Moderna vaccine was offered to the crew. The Navy’s statement says “more than half” of the crew accepted the vaccine.

At the same time the virus popped up in the Philippine Sea, amphibious transport dock USS San Diego (LPD-22) was dealing with the same problem. The ship was already in port in Manama for a scheduled logistics and maintenance port call when about a dozen sailors and Marines on the ship tested positive for the disease, the Navy announced Feb. 26. After testing the entire ship crew and embarked Marines, about 20 total personnel tested positive. They, along with close contacts, were able to be isolated and quarantined within the ship hull, due to the LPD’s enhanced medical capabilities and extensive space compared to a cruiser. San Diego returned to sea for operations on March 12.

USNI News previously reported that no personnel on either ship were hospitalized due to the virus.