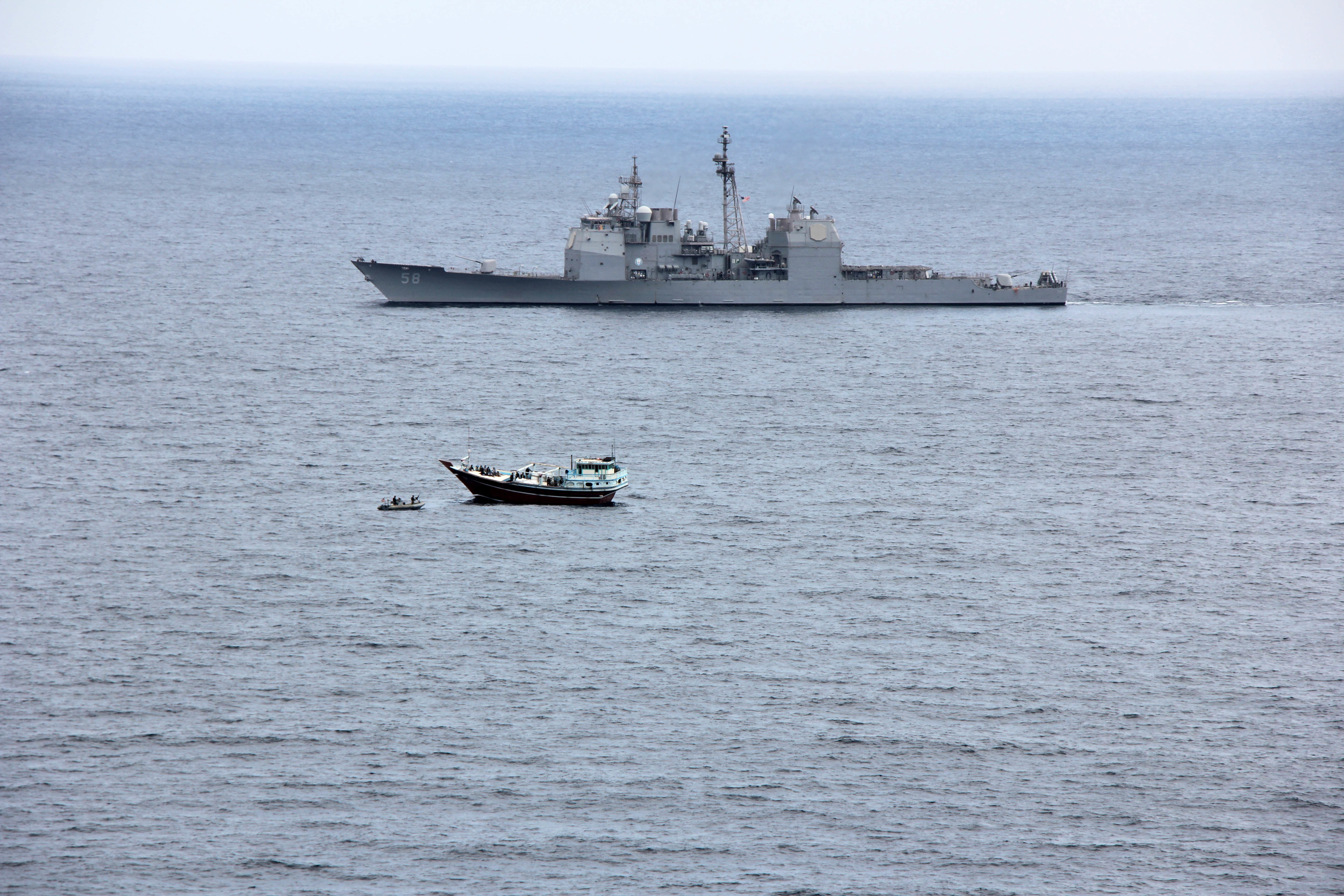 Visit, board, search and seizure Sailors assigned to guided-missile cruiser USS Philippine Sea (CG 58), deployed to U.S. 5th Fleet and operating in support of the Combined Maritime Forces (CMF), prepare to board a dhow suspected of carrying narcotics in the international waters of the North Arabian Sea, Jan. 30. CMF is a multinational maritime partnership which exists to counter illicit non-state actors on the high seas, promoting security, stability and prosperity in the Arabian Gulf, Red Sea, Gulf of Aden, Indian Ocean and Gulf of Oman. US Navy photo.

This post has been updated to include additional information from U.S. 5th Fleet.

The Navy is trying to stem the spread of COVID-19 on two ships deployed to the Middle East.

“U.S. 5th Fleet took immediate actions to identify, isolate, test and treat affected Sailors and Marines aboard two ships,” reads a Navy statement released early Feb. 26.
“Medical health professionals are conducting a thorough contact investigation to determine the source of COVID-19 aboard the ships and whether any other personnel may have been exposed.”

5th Fleet spokeswoman Cmdr. Rebecca Rebarich told USNI News that all approximately 600 sailors and Marines on San Diego and 380 on Philippine Sea would be tested to ensure all positive cases are found.

According to the Navy statement, San Diego is pier side in Bahrain, with all personnel still on the ship. The sailors who tested positive are isolated within the ship and being tended to by the LPD’s medical staff.

Rebarich told USNI News that earlier today, after the Navy’s initial statement was released, Philippine Sea “has arrived in port Bahrain and initial test results have confirmed several cases of COVID-19. Sailors with positive cases and close contacts have been isolated on the ship, and the ship remains in a restricted COVID bubble at the pier. The port visit and medical support have been coordinated with the host nation and Bahrain Ministry of Health.”

The cruiser does not have as robust a medical facility and staff as the LPD, so it’s unclear if any testing or treatment may need to take place ashore. 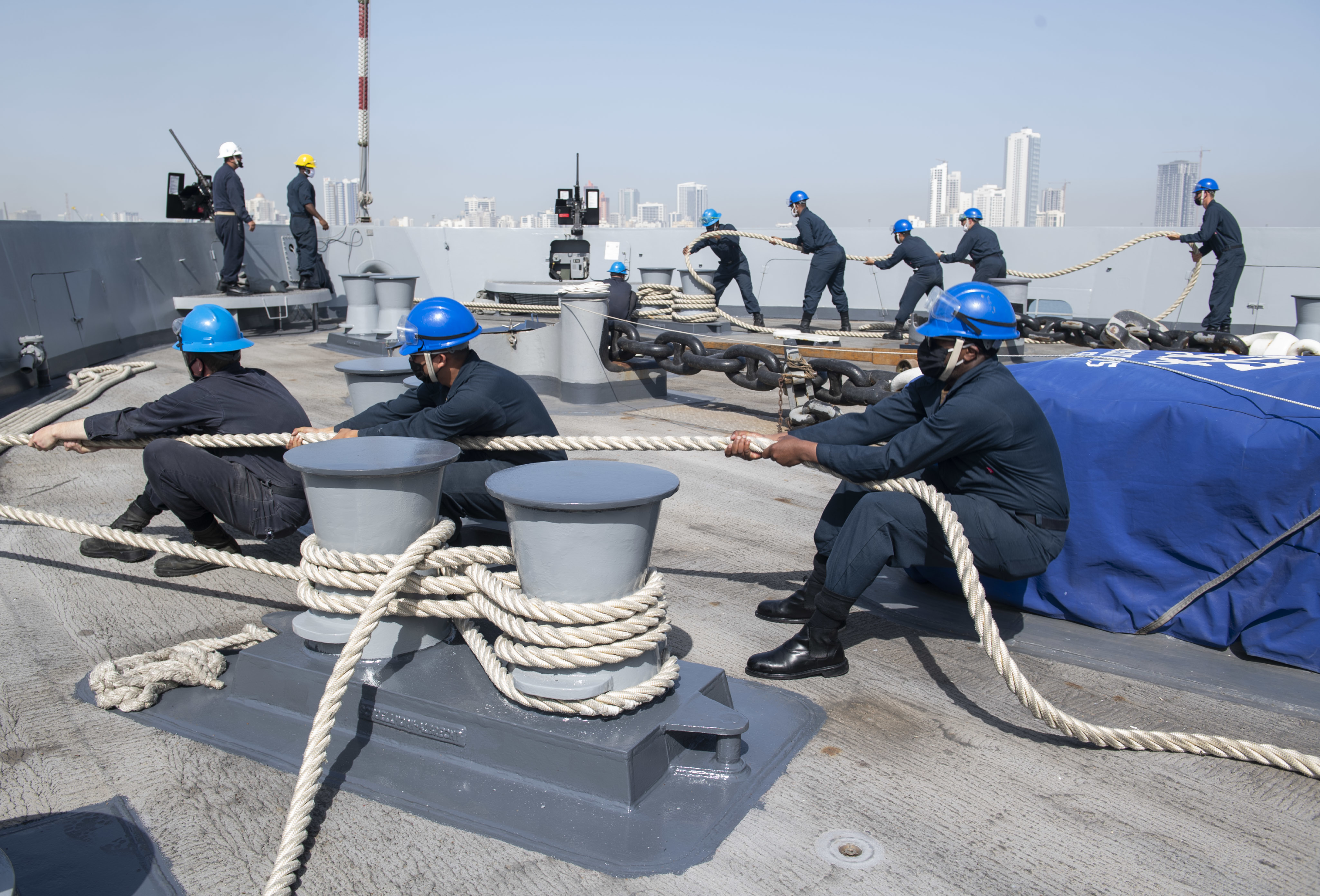 Sailors heave line from the forecastle of amphibious transport dock ship USS San Diego (LPD 22) on Jan. 28, 2021. San Diego, part of the Makin Island Amphibious Ready Group, and 15th Marine Expeditionary Unit are deployed to the U.S. 5th Fleet area of operations in support of naval operations to ensure maritime stability and security in the region. US Navy photo.

Navy leadership has been frank that dozens of ships operating at sea have seen some positive COVID-19 cases during the past year, but the service has prided itself in its ability to catch these cases early and prevent any outbreaks since last spring.

The service has ordered ship crews to conduct a 14-day restriction-of-movement (ROM) quarantine period ahead of deployments, with sailors being tested for COVID-19 at the beginning and the end of the ROM. Once the sailors are deemed to be in a COVID-free bubble, they still wear masks and practice physical distancing onboard the ship as best as possible – including measures such as eating meals in work or berthing spaces instead of common areas like the mess or lounges, to minimize the number of people any given sailor comes into close contact with. Ships also conduct random COVID testing while at sea, in the hopes of catching any asymptomatic cases before they have a chance to spread throughout the crew.

In April, USS Kidd (DDG-100) paused its deployment in U.S. 4th Fleet to return to San Diego, Calif., to try to rid the ship of a COVID-19 outbreak. At least 78 sailors in the crew of about 330 tested positive for the virus. The outbreak was discovered about a month after the ship stopped in Hawaii, during its transit from U.S. 7th Fleet over to 4th Fleet, leaving officials unsure how the outbreak started.

The first major outbreak occurred on USS Theodore Roosevelt (CVN-71) in March. More than 1,200 sailors ultimately tested positive for the disease, which sidelined the carrier for several months in Guam as the crew quarantined ashore and conducted deep cleaning on the ship to try to get rid of the virus. One sailor died in the TR outbreak.

This month, Theodore Roosevelt again reported that three sailors had tested positive – but thanks to the strict mitigation measures that have been put in place since the first outbreak, a week later the ship was still at just three positive cases even after testing hundreds of sailors to ensure there wasn’t a larger outbreak.