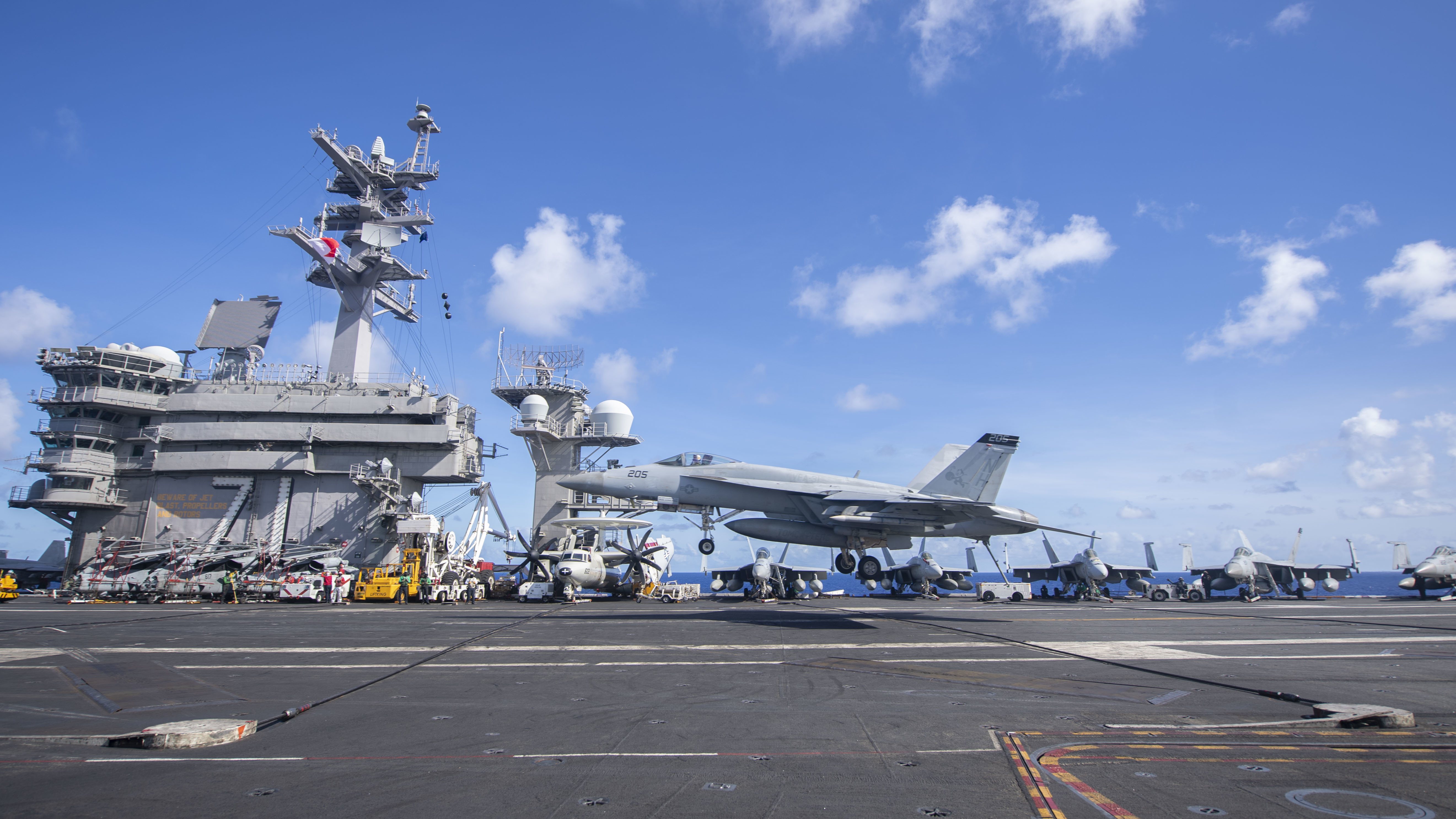 An F/A-18E Super Hornet, assigned to the “Tomcatters” of Strike Fighter Squadron (VFA) 31, lands on the flight deck of the aircraft carrier USS Theodore Roosevelt (CVN 71) Jan. 29, 2021. The Theodore Roosevelt Carrier Strike Group is on a scheduled deployment to the U.S. 7th Fleet area of operations. US Navy photo.

This post has been updated to include additional information from U.S. Pacific Fleet.

The three sailors are in isolation and will be flown off the ship when it is operationally feasible, he said. Others identified as being in close contact with the three infected sailors are also in quarantine and have all tested negative, Vasquez said.

The Theodore Roosevelt Carrier Strike Group is operating in the Pacific in its second deployment in the past year. The strike group stopped in Guam from Jan. 31 through Feb. 4 for a port call and then conducted dual-carrier operations with the Nimitz Carrier Strike Group.

During the Guam visit, sailors were allowed off the ship, but measures were put in place to keep them from coming into contact with anyone outside their COVID-free bubble. A section of the beach was cordoned off for them, and they were not supposed to come in contact with other personnel on the pier, Vasquez said.

Several new sailors reported to Theodore Roosevelt during the Guam stop, Vasquez told USNI News, but the new sailors all completed a 14-day quarantine first and tested negative before they were allowed to join the crew.

The carrier formally began its most recent deployment just before Christmas, kicking off the second in a double-pump deployment, or two full deployments in a single maintenance and training cycle.

Theodore Roosevelt’s 2020 deployment was marked by a widespread outbreak of the virus, which sickened more than 1,200 sailors and killed one sailor. The ship was pier side in Guam for more than two months in the middle of the deployment, as sailors rotated on and off the ship for quarantines in a bid to rid the crew of the virus.

This time around, the carrier followed strict Navy guidance meant to ensure sailors were not infected with COVID-19 before they boarded the ship. The crew of the Theodore Roosevelt Carrier Strike Group began a pre-deployment restriction-of-movement (ROM) period in November “to try to eliminate opportunities for COVID-19 to infect its members,” the Navy said at the time, with sailors being tested for COVID-19 before and after the ROM. They also began the deployment following strict physical distancing, cleaning and mask-wearing protocols just in case any crew members were sick despite the testing and the ROM.

“These sailors, who have not experienced any symptoms, as well as all identified close contacts are currently isolated aboard the ship in accordance with Navy and CDC guidance. Shipboard health professionals conducted a thorough contact investigation and all identified close contacts have tested negative for COVID-19,” reads a Navy statement issued today.
“The ship is following an aggressive mitigation strategy in accordance with Navy and CDC guidelines to include mandatory mask wearing, social distancing, and proper hygiene and sanitation practices. U.S. Pacific Fleet is committed to taking every measure possible to protect the health of our force. USS Theodore Roosevelt is currently underway and remains fully operational.”

The Navy did not comment on how the virus may have found its way onboard the ship despite all the protocols. The same protocols were used successfully on the other carrier strike groups that deployed last year, including the Eisenhower, Harry S. Truman and Nimitz CSGs.

The IKE CSG is about to deploy, likely this week, for its second in a double-pump deployment as well. The crew was offered COVID-19 vaccines in a mass vaccination event at the pier at Naval Station Norfolk, Va., over the weekend. About 80 percent of the crew accepted the offer to be vaccinated, USNI News reported. Though crew members will still have to follow the Navy’s COVID mitigation protocols in the beginning, Navy leadership expressed hope that some protocols could be eased if an internal herd immunity were achieved within the CSG crew, and they said leadership in Norfolk and in the forward theater the CSG will operate in are committed to trying to safely schedule port calls during this deployment, which they could not do last year – leading the carrier to set a record by spending 206 consecutive days at sea last year.