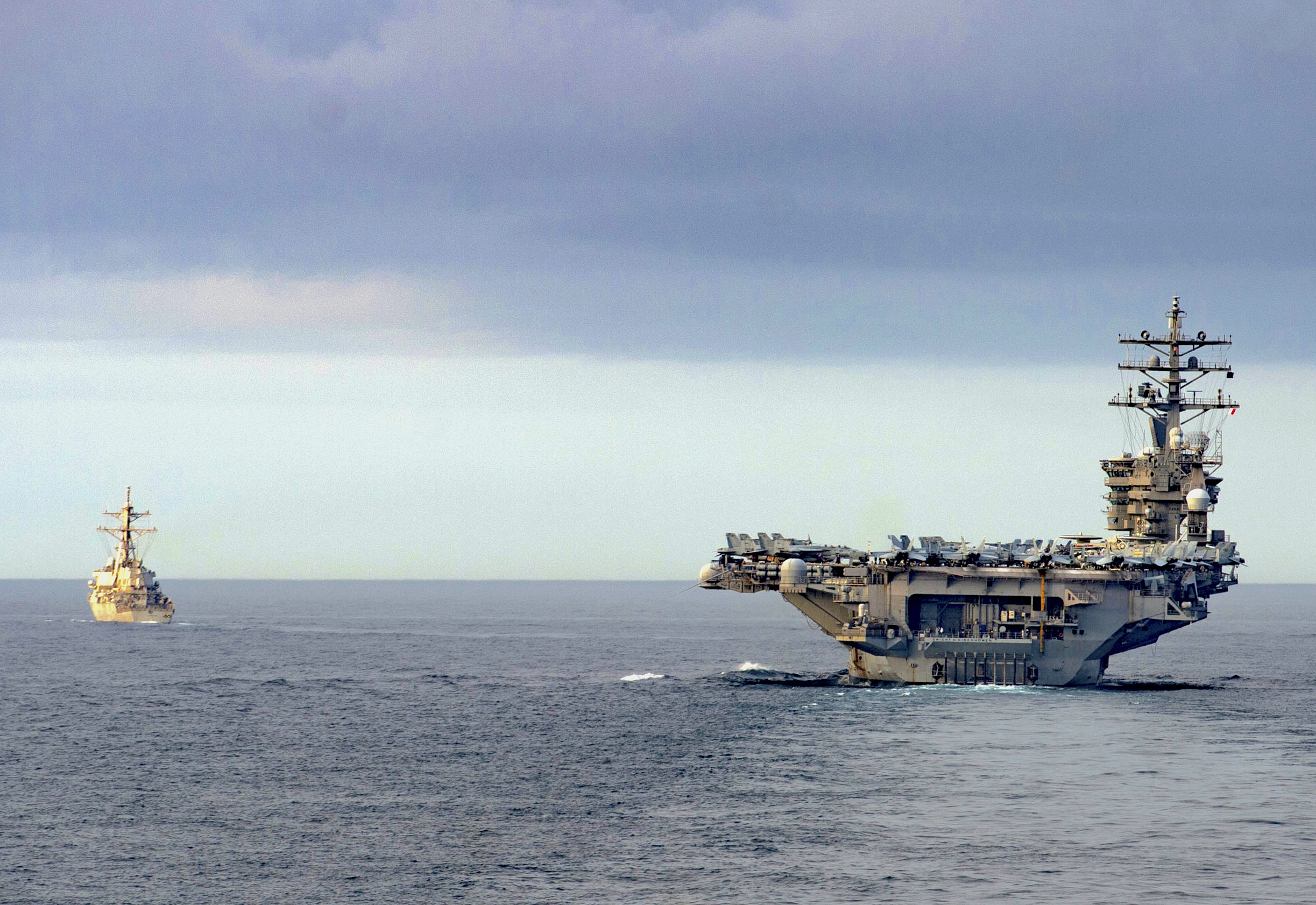 The sailors of the Dwight D. Eisenhower Carrier Strike Group will receive their COVID-19 vaccines this weekend, just days ahead of pulling out of Norfolk, Va., for a second deployment in the past year, Navy officials said today during a media teleconference.
About 80 percent of the strike group, or about 5,000 sailors, have accepted an offer to be vaccinated against the virus that spurred a worldwide pandemic, created strict mitigation measures in the Navy, led to USS Dwight D. Eisenhower (CVN-69) spending 206 consecutive days at sea without a port call on its first deployment last year, and sickened 30,998 sailors and killed five so far.

“We’re going to send them over the horizon here in a few days having received their first vaccination, and somewhere around 80 percent of the crew of the entire strike group has accepted the offer of getting a vaccination, and then they’re getting a second vaccination four weeks later, and then they’re going to be well on their well to full immunization in about six weeks,” U.S. 2nd Fleet Commander Vice Adm. Andrew Lewis said today on the media call.

Lewis told USNI News during the call that, while the IKE CSG deployment from January to August 2020 included no port calls and strict cleaning and social distancing measures to keep sailors from catching and spreading the virus, “we’re driving toward what we would call a normal deployment.”

“I had a telephone conversation with a three-star and a four-star where the Eisenhower is going to be going – and I obviously can’t talk about the actual region where they’ll be deploying to – but I talked to them, and they are fully committed to a couple things: one is getting the second vaccination to them, which you have to do,” said Lewis, noting the logistical challenge of moving the vaccine doses into theater and then to the ships while keeping them sufficiently cold.
“And then they’re committed to having what we would call a quality-of-life slash maintenance port visit. And that’s something that we’re really driving to, the forward commanders are committed to doing. I’m pretty confident that’s going to happen. There’s a dim light at the end of the tunnel, but it’s becoming brighter all the time, I believe.” 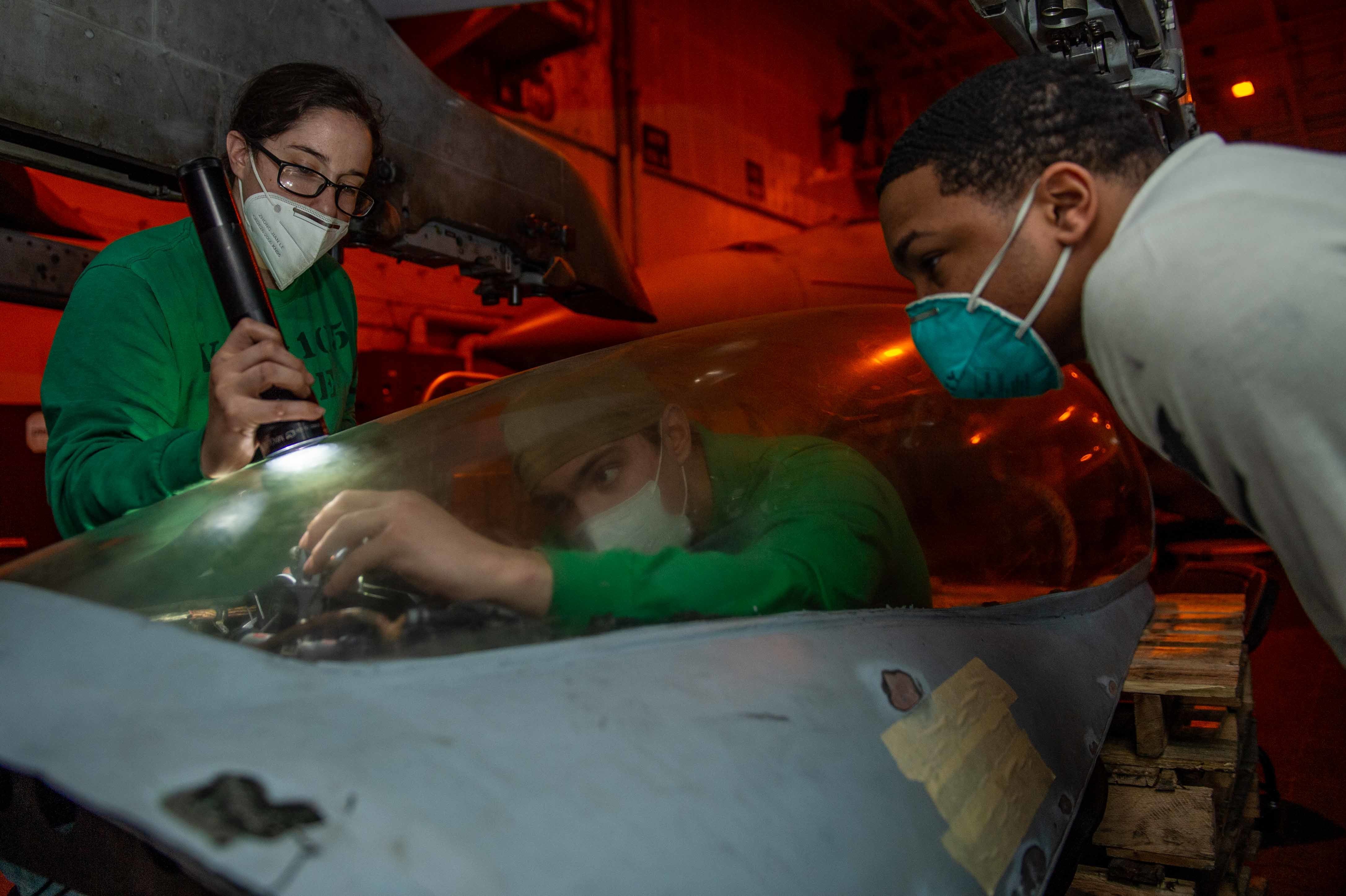 Captain Laurence Kuhn, the force medical officer at Naval Air Force Atlantic, said that “the vaccine is our way to try to get back to some level of normalcy. So we don’t know ultimately what that will mean for us, but it certainly opens the opportunity from the significant restrictions that we’ve all been living under for the past, roughly, a year at this point.”

The severe restrictions put in place raised questions about the mental health toll on sailors, who were already worried about loved ones at home during the pandemic and were not allowed to leave the ship for port calls. Kuhn said it was well established that the pandemic created both a physical health and mental health challenge for the nation and for the Navy. While this deployment might see some restrictions eased later on, Kuhn said the strike groups’ staff had been plussed up to include more mental health professionals and chaplains on every ship who could both tend to those in crisis and to work with the whole crew to build resiliency and focus on morale and welfare.

Later in the call, Kuhn added that medical leaders and scientists in the Navy and Defense Department, along with Navy personnel who are embedded with the Centers for Disease Control and Prevention, are researching what the vaccine and herd immunity would mean for sailors on deployed ships. As their research continues, Navy leadership can “look forward to making appropriate changes when we have that information in regards to changes in policy.”

Lewis noted that “we’re not going to relax any of the practices that we’ve used to this point any time soon anyway, because, here’s why: a lot of this stuff we should have been doing anyways,” he said, especially regarding a focus on hand-washing and not showing up to work when someone isn’t feeling well. But, between rising vaccinations numbers, plus some natural immunity in those who have recovered from COVID themselves, “at that point, the confidence level that we will have established somewhat of an internal herd immunity … is a relatively high confidence level,” at which point some other measures like social distancing could begin to change if the science proves it out.

Lewis explained on the call that the logistics for this weekend have all fallen into place within the last week or so, just barely securing the vaccine doses needed to give to strike group sailors before they deploy next week.

The IKE CSG sailors went into a restriction-of-movement period just after Christmas, spending two weeks in isolation before reporting to their ships and heading out to sea for a composite training unit exercise. The vaccine wasn’t available before the left for COMPTUEX, and as DoD has had access to more doses in recent weeks, the IKE CSG was at sea and couldn’t be vaccinated – due to the refrigeration requirements for both the Pfizer and Moderna vaccines, the shots have to be given ashore, not flown to the ships and administered at sea.

Through an effort led by Naval Air Force Atlantic, the crew of destroyer USS Thomas Hudner (DDG-116) was able to come to the pier to receive the Pfizer vaccine three weeks ago and will receive their second shots this weekend.

But for the rest of the ship crews and air wing, it was unclear if they’d be vaccinated before they left for deployment.

Rear Adm. Doug Beal, the vice commander of U.S. Fleet Forces Command who recently has led a team of nine sailors to distribute vaccines to the fleet, said during the call that “what we found was, as we got closer to the Eisenhower getting ready to deploy, was that there was enough vaccine in the system: it was a matter of priorities.”

Within the broader military health system, “we had the doses available, it was a matter of doing a little horse-trading and some convincing. But again, with support of senior leadership, we were able to make that diversion happen.”

Lewis added that “a few days ago we found out that Adm. Beal’s team freed up enough of the vaccine to get the entire strike group vaccinated. Prior to that, we had only freed up the carrier and the air wing, and it was just a week ago that we freed that up.”

Everyone getting their first dose this weekend will receive the Moderna vaccine, which will be easier to send forward into their operating theater for a second dose in four weeks. Moderna doesn’t have the same deep-freeze requirements as the Pfizer vaccine.

The officials described this weekend’s vaccination effort as “intricate.” The Navy will have to administer about 5,000 doses of the vaccine in the coming days, all while keeping sailors aboard their ships at the pier, to avoid contaminating the COVID-free bubble they’ve created – and then four weeks from now they’ll have to vaccinate everyone again while overseas and without the support and infrastructure at Naval Station Norfolk in Virginia.

Additionally, Beal said, “we’re also going to make sure that we meter this in a smart way because air crew, according to Navy directives, cannot fly after taking the vaccine for 72 hours, so we’re going to make sure that we get those folks metered in in the correct way so that the ships remain operationally effective and can continue to do their mission. Mission assurance is the main reason we did this, so we’re going to meter the vaccine accordingly.” 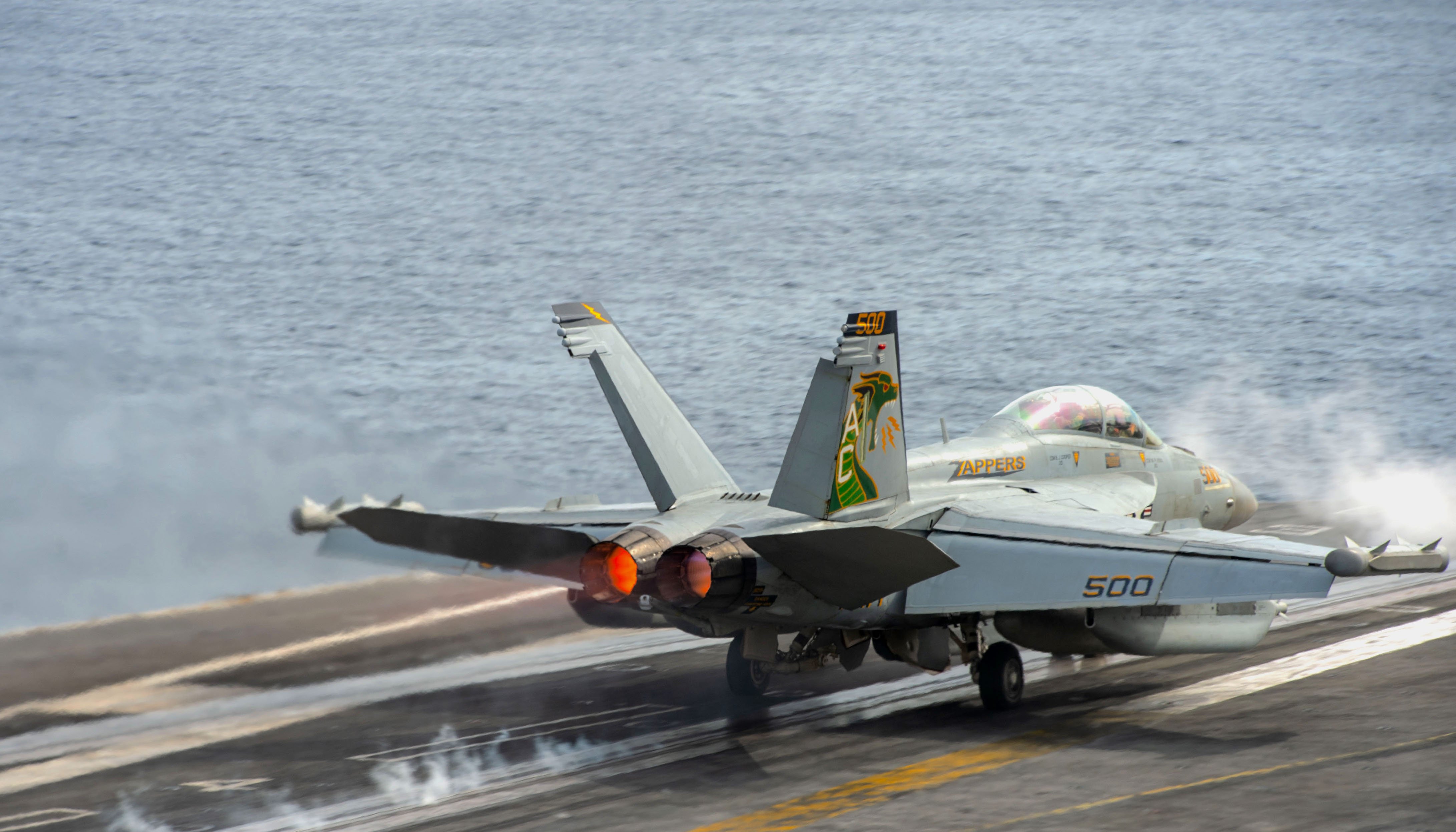 An E/A-18G Growler, attached to the ‘Zappers’ of Electronic Attack Squadron (VAQ) 130, launches from the flight deck aboard the Nimitz-class aircraft carrier USS Dwight D. Eisenhower (CVN-69) on Feb. 4, 2021. US Navy Photo

Beal said his team has gotten a lot of thanks in recent days for pulling off this “heavy lift” to obtain 5,000 vaccines in such a short timeline, but he said “I would also credit our senior leadership who helped us make those decisions and who helped us prioritize the doses to go to the ship that’s going to go downrange. It’s about short-term health and the long-term health of our sailors, so this is a very positive benefit. So I’m very excited that so many have decided to take the vaccine, and I’m very excited that they’re going to get to go downrange and at least achieve some sense of normalcy. This is a leading indicator, I think, of what’s in store for the country soon.”

The Iwo Jima Amphibious Ready Group and 24th Marine Expeditionary Unit will be the next formation to leave the East Coast “in the very near future” for a COMPTUEX and deployment, and Lewis said they’ve already been fully vaccinated, with nearly 90 percent of the crew accepting the offer to receive a vaccine. Because they were still ashore when vaccine doses started becoming available to the Navy, the service was able to route doses to that ARG/MEU in a slower and more deliberate manner, versus the rushed effort to vaccinate the Eisenhower CSG over the holiday weekend after COMPTUEX ended and before they left for deployment.

Because the vaccines are still considered experimental and have been authorized for emergency use only by the Food and Drug Administration, Lewis said “we cannot make it mandatory yet. I can tell you, we’re probably going to make it mandatory as soon as we can, just like we do with the flu vaccines.”

Though not mandatory, the take-rates for the vaccine are higher among these soon-to-deploy units than the Navy overall, and higher than many recent surveys asking general population how many would want the vaccine versus how many would definitely not take it.

“There is a sense of confidence and a sense of wellbeing that comes from being fully immunized, that’s a good thing,” Beal said when asked about the high percentage of sailors accepting the vaccine.
“But I would also say that taking the vaccine, making that decision to volunteer and take the vaccine, is more than just an individual decision, it’s a selfless act. It’s an act that benefits the entire group, not just the individual. And I like to think that our sailors and our Marines are all about doing something that’s above themselves, and I’m hoping that so many more of them will make the decision to get vaccinated, to get immunized and to help their fellow sailors and Marines by doing that.”