NATO kicked off its annual Dynamic Manta anti-submarine warfare exercise today in the Mediterranean, with this year’s iteration including an American nuclear-powered attack sub and the French carrier strike group as it passes by the exercise’s operating area off Sicily.

The exercise, which runs through March 5, includes submarines, surface ships and aircraft from eight nations: Belgium, France, Germany, Greece, Italy, Spain, Turkey and the United States. Standing NATO Maritime Group 2 leads the exercise that is meant to boost ASW proficiency in that particular geography and threat set, which includes routine Russian submarine traffic as boats flow between a Russian sub base in Tartus, Syria, to other locations such as the Black and Baltic seas.

Spanish Navy Rear Adm. Manuel Aguirre Aldereguía, the commander of Standing NATO Maritime Group 2 embarked aboard Spanish frigate ESPS Cristóbal Colón (F-105), said during a Dynamic Manta press conference on Feb. 19 that the exercise is important “not only in training and keeping the high readiness of the force but also, as I mentioned, from enhancing interoperability, showing NATO presence and assuring allies of the maritime commitment to collective defense.”

Noting that the event would include fixed-wing maritime patrol aircraft, helicopters, surface ships and submarines operating in a relatively small box and in a complex maritime environment, he added that the scenarios are meant for “fostering interoperability among participating units and exercising as well to improve one of the strengths of NATO military forces, which is the command, control and communications structure, increasing … mutual understanding of all participating forces and preparing them for operations in peace, crisis and conflict.”

Last year, Dynamic Manta 2020 kicked off just as a coronavirus outbreak was beginning in Northern Italy. A NATO research ship was put into quarantine due to concerns that a crew member could have come from an affected town, but the rest of the exercise continued as planned.

This year, the exercise is able to be more technically complex due to the addition of a nuclear-powered SSN and the French CSG. But U.S. Navy Rear Adm. Andrew Burcher, the commander of NATO submarines and the exercise director, said during the press conference that NATO exercises are also about boarding other nations’ ships to get a deeper understanding of how allies operate, and creating personal friendships and partnerships that can be called upon in a time of need. He said COVID-related travel restrictions would affect the cohesion-building aspect of the exercise, but he stressed that “even in the COVID environment, we are advancing and moving forward with our ASW skills in this highly critical area.”

Part of that includes using France’s Charles de Gaulle CSG, which is deployed for national tasking.

“This year the French Navy carrier strike group Charles de Gaulle will join, train for a limited time. It will enhance its own ASW skills on its way to its operational deployment. Even if it’s going to be a short time period, this interaction is an opportunity for NATO and allied units to train together and to show the capacity to effectively plug and fight if need be,” French Vice Adm. Didier Piaton, the deputy commander of NATO Allied Maritime Command (MARCOM), said during the press conference.

Burcher said that “this is an important, unique opportunity for both the submarines as well as the surface ships to engage in a high-threat environment: the submarines engaging in looking at how they would prosecute a high-value unit as it transits in a very typical transit scenario; at the same time, the high-value unit, the carrier strike group, will be able to go through a high-submarine-dense environment and practice its anti-submarine warfare skills. That is a very unique opportunity, and it is a huge taking advantage of integrating the schedules of national operations with the NATO operations.”

Burcher also said that NATO was looking to use its research arm again this year to advance ASW operations and training. The Centre for Maritime Research and Experimentation again deployed an In-Stride Debriefing Team (IDT) to help improve the ships’ training and tactical understanding of their operating environment through near-real-time evaluation and feedback.

Last year, CMRE also brought out research ship NRV Alliance and conducted extensive research with ASW sensors on unmanned vehicles, buoys and seabed devices. Burcher said that research piece would not happen again at this year’s Dynamic Manta but would take place at sister exercise Dynamic Mongoose in the North Atlantic this summer.

Burcher said the addition of a U.S. nuclear-powered sub was important because it added to the diversity and the quantity of subs in the exercise this year.

“There are only really two ways you can detect a submarine: it’s visually or acoustically. And when you have a large number of submarines in a certain area, it creates a more challenging dilemma than having one submarine in that area,” he said.

“Doing this, as I mentioned before, in this relatively close environment, it creates a lack of certainty, if you will, and requires the solution to be a little bit more focused because there could be information that is coming from other submarines that are operating nearby,” he added.

Additionally, participants in this exercise can practice detecting nuclear- and diesel-powered boats and understanding how to best find and track each type. For example, a diesel-electric submarine will have to come to periscope depth at certain intervals to recharge its batteries, whereas the nuclear-powered sub can remain submerged for longer.

“That contrast highlights the advantage of having the different types of submarines in the area. A diesel submarine charging their batteries will have to be at periscope depth in some fashion for a period of time, whereas a nuclear-powered submarine will not have that operational requirement. And we integrate that requirement into some of the [exercise scenarios] so that all the participants can see that and understand that that is occurring and take advantage of that in some fashion in the development of their capabilities.” 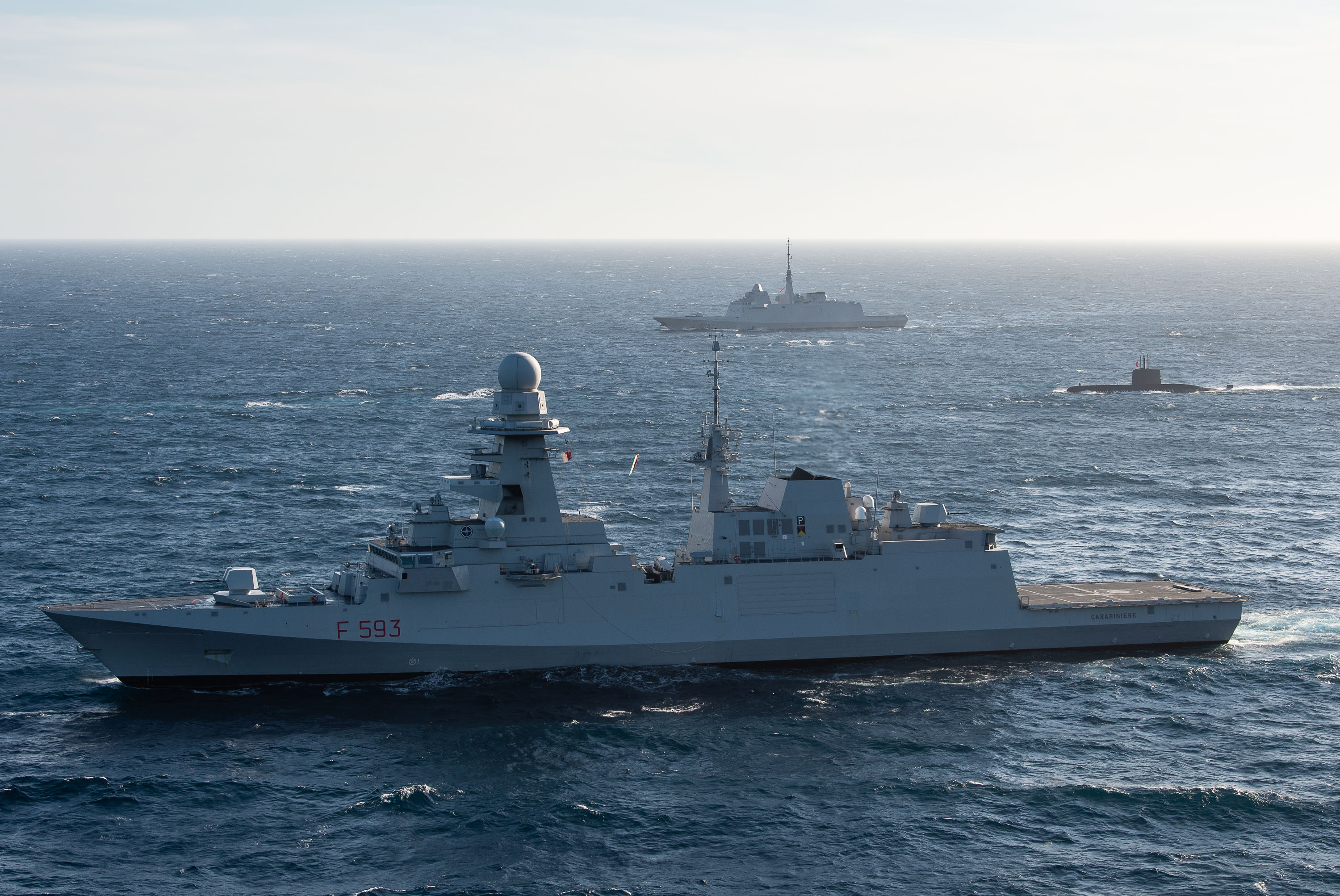 The U.S. is also providing two P-8A Poseidon maritime patrol aircraft, which will be supplemented by German and Greek P-3C Orion MPAs, a French Atlantique 2 MPA and an Italian AgustaWestland AW101 ASW helicopter.