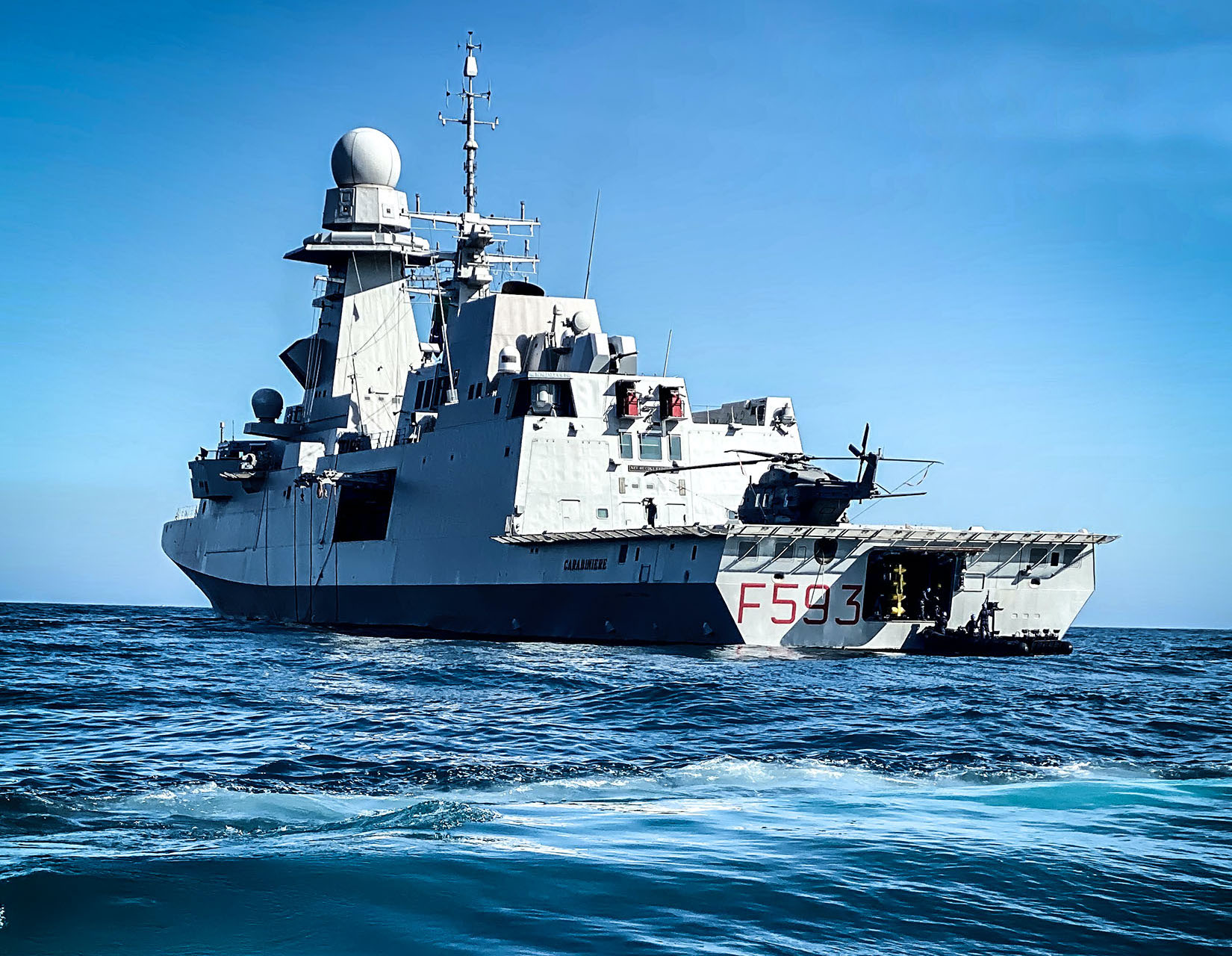 ABOARD ITS CARABINIERE, IN THE IONIAN SEA – The Mediterranean Sea has a host of security challenges: Russian submarine activity in the Eastern Med, instability in Syria and Libya, as well as the flow of migrants and illicit traffic throughout the region.

The Standing NATO Maritime Group 2 is tasked with addressing them all.

“Cultural and historical and geographic reasons” contribute to the Mediterranean being one of the most challenging in the world for navies, SNMG-2 commander, Italian Rear Adm. Paolo Fantoni, told USNI News. Addressing those challenges calls for Fantoni and his force to conduct a range of operations, from presence and partner-building operations with non-NATO countries to exercises like the ongoing Dynamic Manta 2020 that prove SNMG-2 to be a credible deterrence force in high-end operations like anti-submarine warfare.

Though SNMG-2 can technically be deployed anywhere across the globe to support NATO interests, the group typically focuses on the Mediterranean and Black seas. This means it influences security in Southern Europe, North Africa and the Middle East.

On the higher end of the operating spectrum is countering Russian submarine and other naval activity in the Eastern Med, near its naval base in Tartus, Syria. 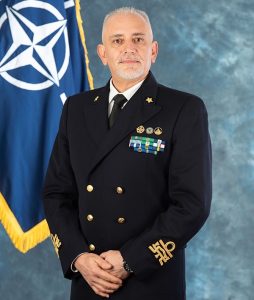 He clarified the notion that these submarines are a threat, giving a more nuanced description.

“In this respect, of course they are military vessels, they don’t belong to the alliance, they are present – so we could consider them as a threat, but I don’t see a threat, an immediate threat to the forces. We respect their potential capability but also confident that we are as well prepared for any type of emergency,” he said.

The admiral, who took command of SNMG-2 in December, said he’s had less contact with Russian naval forces in the Mediterranean than his counterpart, Standing NATO Maritime Group 1, typically has in the Baltic Sea and other Northern European waters. During last year’s BALTOPS 2019 exercise, for example, SNMG-1 ships had near-daily contact with Russian ships, helicopters and jets.

Fantoni said it was possible he’d see more of the Russians when the group eventually moves into the Black Sea for operations, but he cautioned that excessively monitoring the activities of a third party can distract from fulfilling his mission: the safe operation and integration of the ships and helicopters in his group.

SNMG-2 has a core group of ships that are conducting training and exercise events in warfare areas and supporting partner-building activities. These ships currently include Carabiniere, Canadian frigate HMCS Fredericton (FFH 337), Greek frigate HS Aegean (F 460) and Turkish frigate TCG Salihreis (F 246), though the composition of the group can change throughout the six-month period in which Fantoni and Carabiniere are in command. 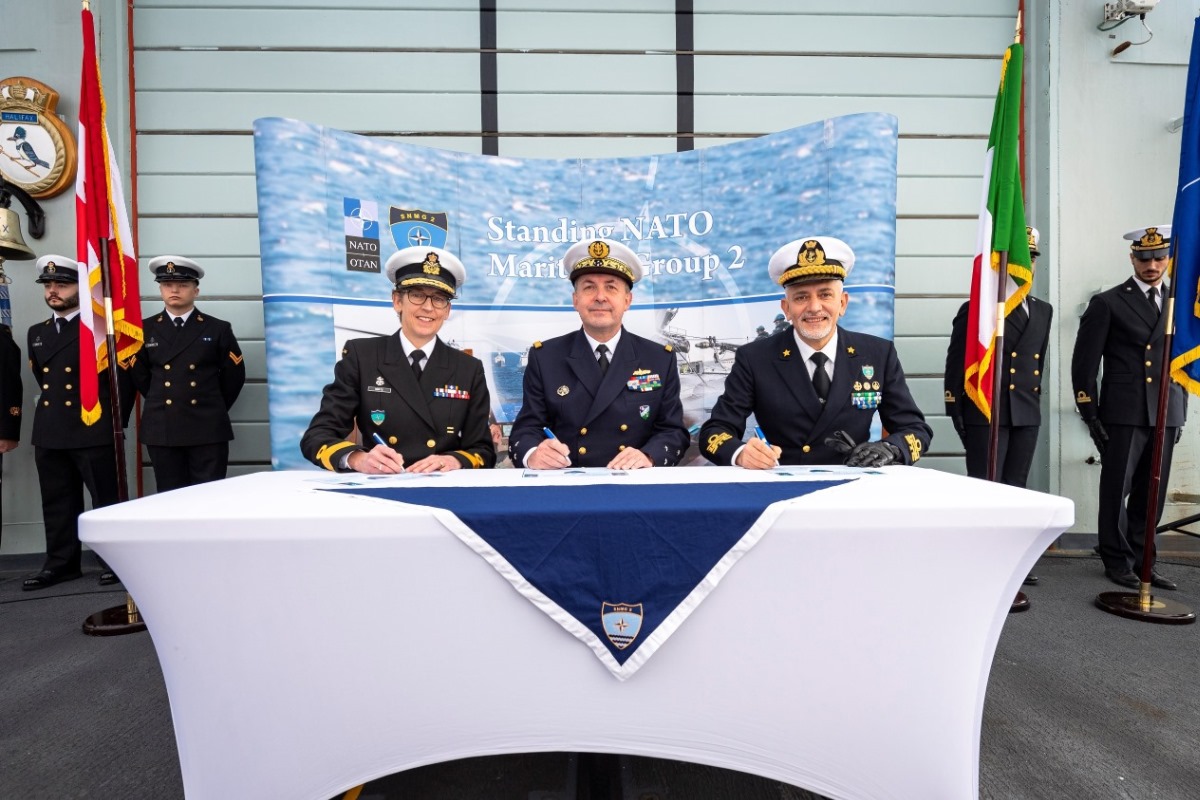 Additionally, SNMG-2 is commanding another task unit led by German frigate FGS Mecklenburg-Vorpommern (F 218) and including Turkish patrol boat TCG Karsiyaka (P-1206) and Greek mine hunter HS Kalypso (M 64), missile boat HS Xenos (P 27) and gunboat HS Machitis (P 266). These ships are dedicated to operations in the Aegean Sea to control the flow of migrants, in support of an agreement between Greece and Turkey in 2016.

To further promote stability in the Med, NATO launched a Mediterranean Dialogue program in 1994 that is aimed at helping non-NATO countries in the region align their forces to NATO standards and procedures and to have more training and interaction opportunities with NATO forces in all domains, including the maritime. Ultimately, successful participation could lead to non-NATO military forces being ready to deploy alongside NATO for certain non-Article 5 collective defense missions.

Tunisia joined in 2016 and in 2018 agreed to seven defense capability-building packages, making them among the furthest along in the program, Fantoni said during a press conference aboard Carabiniere on the first day of the Dynamic Manta exercise. Based on the plan agreed to by Tunisia and NATO – which focuses on education, training and building interoperability – Tunisian naval forces would be ready to work alongside a NATO group by 2023.

Fantoni said SNMG-2 visited Tunis for a port call in February. During the three-day visit, they trained with the Tunisian navy, and Fantoni worked with the Tunisian chief of navy to address the current focus of the NATO partnership: exchanging maritime situational awareness information.

Fantoni, who served as the Italian Navy’s defense attaché at the Italian embassy in Tunis from 2016 until the fall of 2019, said they made good progress in outlining how they could exchange data on the Mediterranean environment, patterns of life, typical routes and behaviors of maritime traffic and more – in the aim of helping the Tunisian navy better identify irregular traffic patterns that could indicate illicit activities, including terrorism.

Fantoni said during the press conference that the key to NATO’s credibility is its resolve to maintain freedom and security for all nations in the region.

“As an Italian officer, as an Italian admiral that has served most of the year at sea, I am cautious that the key role of NATO is for the free use of sea and for peace in the region – and from my previous experience as military attaché six months ago, I may say that this feeling is shared by most of the countries in the Mediterranean, including non-NATO countries,” he said.