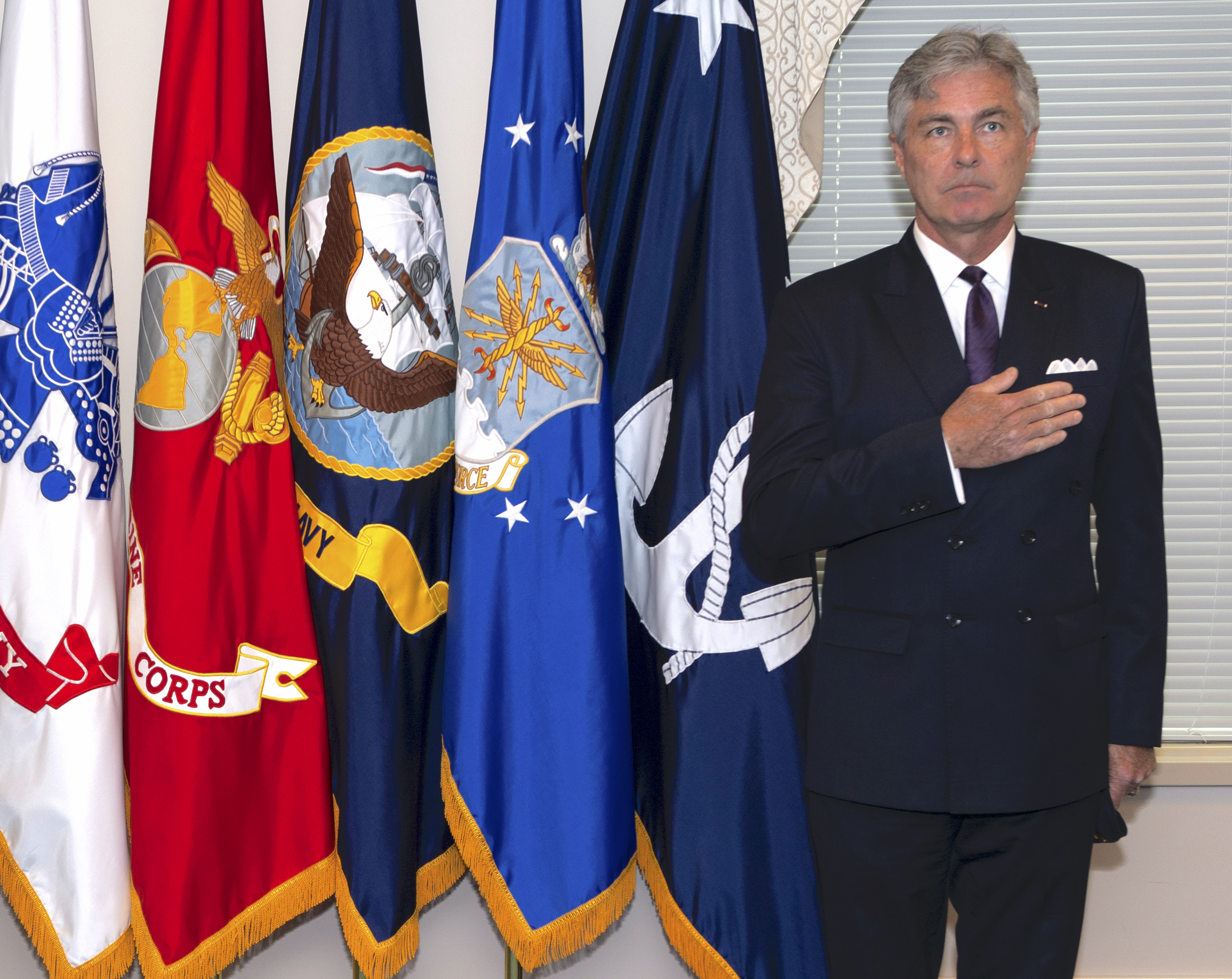 Kenneth Braithwaite was sworn in as the newest secretary of the Navy during a private ceremony today at the Pentagon, capping what has been a tumultuous six months for the department’s leadership.

The Senate confirmed Braithwaite last week after he offered members of the Senate Armed Services Committee a sobering assessment of where he saw the Department of the Navy today.

“It saddens me to say: the Department of the Navy is in troubled waters due to many factors, primarily the failings of leadership. Whether [Glenn Defense Marine Asia], ship collisions, judicial missteps or the crisis on USS [Theodore] Roosevelt, they are all indicative of a breakdown in the trust of those leading the service,” Braithwaite said during his May 7 confirmation hearing.

Braithwaite is a 1984 graduate of the U.S. Naval Academy, a husband and father of two, a retired rear admiral, and a formal Naval aviator and Navy public affairs officer. Most recently, he served as the U.S. ambassador to Norway. Before his ambassadorship, Braithwaite worked as a hospital industry lobbyist and worked for former Sen. Arlen Specter (R-Pa.). He lived in Pennsylvania, in a home originally built in 1741 and used by British General Lord Cornwallis as a staff quarters during the Battle of Brandywine in 1777, according to his Department of State bio.

Braithwaite emerged in November as President Donald Trump’s choice to replace former Secretary of the Navy Richard V. Spencer, who was ousted by Secretary of Defense Mark Esper over Spencer’s handling of the case of former SEAL Eddie Gallagher.

Trump didn’t formally nominate Braithwaite until February. In the interim, former Undersecretary of the Navy Thomas Modly served as the acting secretary. However, Modly was forced to resign in April after widespread criticism surrounding his removal of the commanding officer of USS Theodore Roosevelt (CVN-71), which was struggling to contain a spreading COVID-19 outbreak onboard while deployed.

In addition to the churn in leadership, the Navy has also struggled with readiness in recent years. Years of high operating tempos and delayed or deferred maintenance culminated with two fatal guided-missile destroyer collisions in 2017. When USS John S. McCain (DDG-56) and USS Fitzgerald (DDG-62) collided with merchant ships, 17 sailors were killed, and both incidents were rooted in fundamental failures in the crew’s ability to operate their ships effectively, according to a November 2017 summary of two Navy investigations.

The Navy is still dealing with the fallout from a federal investigation into a sprawling corruption case involving contractor Leonard Francis and his ship husbanding company Glenn Defense Marine Asia. The federal probe, dubbed “Fat Leonard,” resulted in 22 guilty pleas and Francis admitting to over-billing the Navy by $35 million. Hundreds of Navy officers were investigated, with a handful sent to court marshal. The Navy also conducted an unknown number of non-judicial punishments and issued other administrative actions like non-punitive letters of caution (NPLOC) and censures for those who have left the service.

Speaking of Navy culture during his confirmation hearing, Braithwaite said, “I won’t say it’s broken. I think it’s been tarnished. I think the events over the last several years have helped see that to occur. And if I’m confirmed, I will make sure that I get at that — again, predicated on good order and discipline, empowering people to understand their responsibilities along that chain of command.”