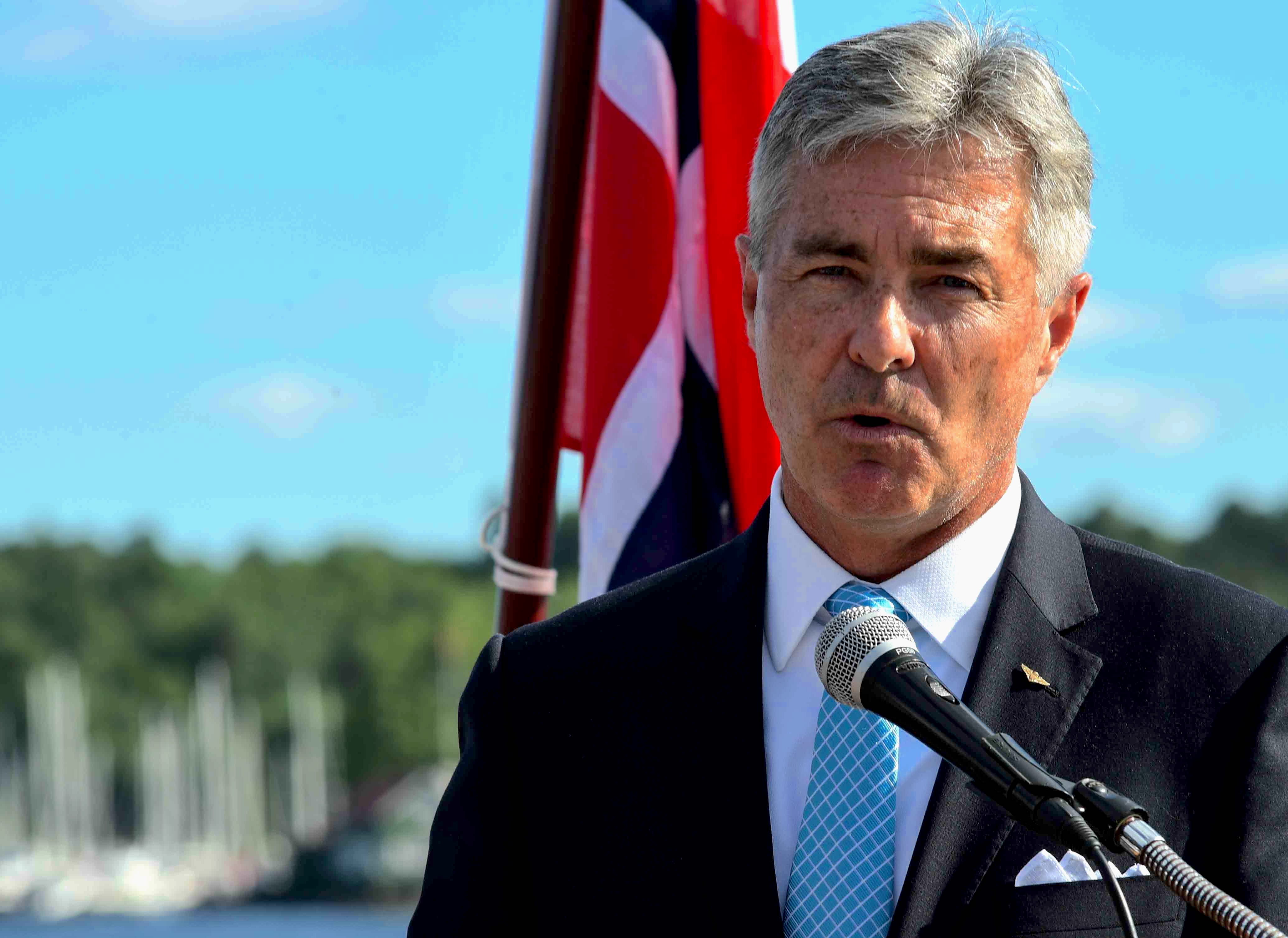 The nominee for secretary of the Navy position blamed nearly a decade’s worth of Navy problems on a “breakdown” in leadership and culture during a Thursday confirmation hearing before the Senate Armed Services Committee.

Kenneth Braithwaite told the committee in his prepared opening statement that the Department of the Navy was in “troubled waters” similar to the era of the 1991 Tailhook scandal. He cited the ongoing Glenn Defense Marine Asia case which Leonard “Fat Leonard” Francis bribed Navy officers in the Pacific, the 2017 fatal collisions in the Western Pacific, the failed prosecution of former SEAL Eddie Gallagher and the fallout from the COVID-19 outbreak on carrier USS Theodore Roosevelt (CVN-71).

“It saddens me to say: the Department of the Navy is in troubled waters due to many factors, primarily the failings of leadership. Whether [Glenn Defense Marine Asia], ship collisions, judicial missteps or the crisis on USS [Theodore] Roosevelt, they are all indicative of a breakdown in the trust of those leading the service,” he told the committee.
“I have witnessed crisis in the Navy before. In 1989, I was aboard the aircraft carrier USS America, sailing with the battleship Iowa, when an explosion killed 47 sailors. That was followed by the Tailhook scandal. These were some dark days for the department.”

Braithwaite, a retired rear admiral and currently the U.S. ambassador to Norway, said he would focus on improving the culture of the Navy if confirmed.

“Culture eats strategy for breakfast. Culture is the one thing that creates for an organization a sense of belonging, a sense of good order and discipline. It is my number-one priority, if I’m confirmed, to restore the appropriate culture in the United States Navy,” he said in response to questions from Sen. Jack Reed (D-R.I.).
“I won’t say it’s broken. I think it’s been tarnished. I think the events over the last several years have helped see that to occur. And if I’m confirmed, I will make sure that I get at that — again, predicated on good order and discipline, empowering people to understand their responsibilities along that chain of command.”

He did not specify which leaders had failed the service or if he meant the military or civilian leadership of the Department of the Navy. In terms of civilian leadership, the instances span the tenures of former SECNAVs Ray Mabus, Richard V. Spencer and acting SECNAV Thomas Modly.

Spencer was removed from office in November by Secretary of Defense Mark Esper over a deal Spencer had worked out with the White House regarding Gallagher’s SEAL designation. Modly resigned in April after a speech he made to the crew of Theodore Roosevelt leaked to the press in which he was critical of the former commander, Capt. Brett Crozier, who Modly had removed from command of the carrier after a letter asking for more help in fighting an outbreak on the ship also leaked to the press.

Braithwaite agreed with expanding an investigation into the circumstances around the outbreak and the Navy’s response. He acknowledged previous reporting that Joint Chiefs Chairman Gen. Mark Milley suggested the expansion of the Navy investigation, in a statement to Sen. Richard Blumenthal (D-Conn.).

“I believe that Chairman Milley was correct,” he said.
“Whenever you’re confronted with a challenge like this, it’s best to pause, consider all the facts and then make the right decision. I learned that in flight school as a young naval aviator that whenever any bell or whistle went off in your cockpit, the most important thing to do was sit on your hands for two seconds.”

Beyond the leadership issues, Braithwaite affirmed the Navy’s goal of developing a fleet of at least 355 ships in a short response to SASC chairman Sen. Jim Inhofe (R- Okla.).

“It needs to be minimally 355 ships. Hopefully, we build beyond that,” Braithwaite said.
“That’s a good brief answer. I appreciate that,” Inhofe replied.

“The way I calculate it — and also talking to the secretary of defense — an extra $20 billion would restore the curve and get us about where we need to be, combining shipbuilding and aircraft manufacturing,” Wicker said.

Braithwaite didn’t talk cost but did cite an ongoing Office of the Secretary of Defense study into the Navy’s annual long-range shipbuilding plan and how he would serve as an advocate for a larger fleet if confirmed. He mentioned the ongoing OSD-led review into the Navy’s future fleet.

SECDEF Esper has stalled the release of the Navy’s latest Integrated Naval Force Structure Assessment and long-range shipbuilding plan pending an assessment by the larger Pentagon. In tandem, Modly had directed the Navy to undertake a budget-savings drive to find $40 billion over the next five years to pay for the spending uptick needed to get to a 355-hull fleet. It’s unclear where the effort of the so-called stem-to-stern review stands now, following Modly’s exit from the department. A spokeswoman from acting SECNAV James McPherson’s office acknowledged a request for information earlier this week but did not provide a status update as of this posting.

Braithwaite, who previously served as the Navy vice chief of information, did express caution over social media and its relationship with the military, in response to Sen. Tammy Duckworth (D-Ill).

“Do you believe that public statements made on social media by active duty service members can negatively impact good order and discipline?” she asked.

“I have some very strong feelings about social media,” he said. “Social media can influence anything at any time, and people need to be mindful of that, no matter what they comment, when they comment, if you will. Look, Senator, I don’t participate in a lot on social media for that very reason, and when I served as the vice chief of information in the United States Navy I advised many senior officers to do the same.”

The comments come as the Navy has made a major push into the digital space, such as courting Internet influencers.

For example, last year the Navy allowed the YouTube stars from the Texas-based Dude Perfect collective to spend three days on aircraft carrier USS Nimitz (CVN-68) for a video. Likewise, the Navy has eliminated television advertising in favor of finding new recruits by sponsoring Esports leagues.