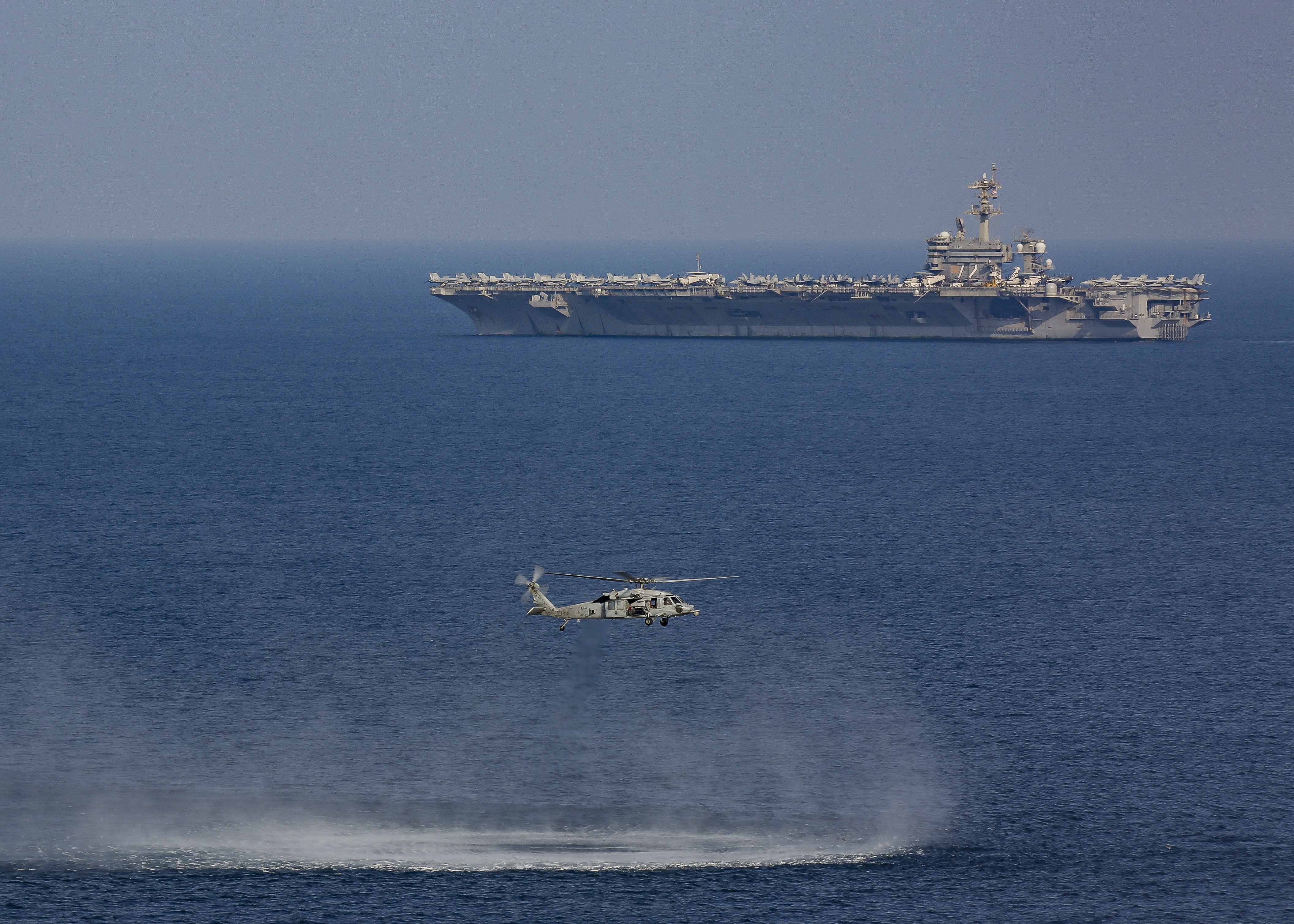 As of Thursday, USS Abraham Lincoln (CVN-72) was operating in the North Arabian Sea. While the Navy is planning for the carrier to be extended, it’s unclear if Secretary of Defense Mark Esper has signed the order to formally extend the deployment.

A Pentagon spokesperson did not have any additional details when contacted by USNI News on Friday.

Leaders aboard the carrier told families to anticipate the extension over social media over the weekend.

“Our time here has been extended again, and we have to stay on station here a little longer,” Lincoln commander Capt. Walter Slaughter said in a Saturday video message to families of the strike group posted on the ship’s Facebook page.
“I’ve always told the crew that world events are going to have a vote in our schedule, and a couple of days ago they voted and we’re going to have to stay here just a little bit longer.”

Slaughter’s message was first reported by The Virginian Pilot.

The extension, approved by Secretary of Defense Mark Esper, is required if a carrier’s deployment will extend past seven months.

Earlier this month, that the U.S. was sending additional troops to Saudi Arabia at the request of U.S. Central Command commander Gen. Kenneth McKenzie following the suspected of attack by Iranian forces on Saudi oil facilities.

On Oct. 11, the Pentagon announced the following forces would move to Saudi Arabia:

Lincoln deployed from Naval Station Norfolk, Va., on April 1 and was scrambled to CENTCOM in May in response to what then-National Security Advisor John Bolton referred to as a “number of troubling and escalatory indications and warnings” from Iran.

Since then, the ship has been on station in the Gulf of Oman and the North Arabian Sea while occasionally pulling in to Duqm, Oman, for port calls.

Upon leaving the Middle East, Lincoln will head to its new homeport at Naval Station San Diego, Calif., as part of a previously announced three-carrier homeport swap.

If Abraham Lincoln returned to the U.S. as initially scheduled, the Navy would not have any carrier strike group deployed to the Middle East for weeks as a heightened sense of tension with Iran envelops the region.

Gaps in carrier deployments, though, are becoming more common. During the summer of 2018, the Navy went 22 days without a full carrier strike group deployed anywhere in the world. In general, carrier deployments have declined in frequency to rates the Navy last experienced as the Cold War ended in the early 1990s.

Currently, the Navy has a carrier readiness jam that spurred the Joint Force to extend Abraham Lincoln’s deployment. Last month, aircraft carrier Truman missed its expected deployment departure after experiencing an electrical distribution system failure. Instead of heading out to sea and being in a position to relieve Abraham Lincoln in the Middle East, Truman is undergoing repairs in Norfolk.

Truman’s crew was told to expect a late November departure, at the earliest, as work fixing the electrical problem continues.

However, the other ships from the Harry S. Truman Carrier Strike Group left their homeports on September 12 to form a Surface Action Group, USNI News previously reported. The SAG had been operating without the carrier near the Arctic Circle, and U.S. 2nd Fleet established a temporary expeditionary Maritime Operations Center in Keflavik, Iceland, the Navy reported.

Of the Navy’s Atlantic Coast carriers, Abraham Lincoln is deployed to the Middle East and is in the process of shifting to being based in San Diego. The following six carriers are in various states of maintenance or training.

Extending a carrier strike group deployment is not unprecedented. But, the Navy had wanted to get in the practice of using an Optimized Fleet Response Plan construct, built on a 36-month cycle involving a seven-month deployment and about 29-months of training, maintenance and surge capacity. Along with OFRP, the Navy had touted a supply-based model of providing carriers to the joint force, rather than a demand-based one that often stretched the Navy too thin during years of requiring two carriers in the Middle East.

In 2016, then-Secretary of Defense Ash Carter extended Truman’s deployment by 30 days. On April 29, 2016, the Navy announced the Truman CSG would remain in U.S. 5th Fleet for an extra month to support Operation Inherent Resolve against ISIS.

Truman departed from Naval Station Norfolk in November 2015 and had been expected to return at the end of May or early June 2016. Instead, Truman returned to Norfolk on July 13, 2016, after more than 200 days at sea.