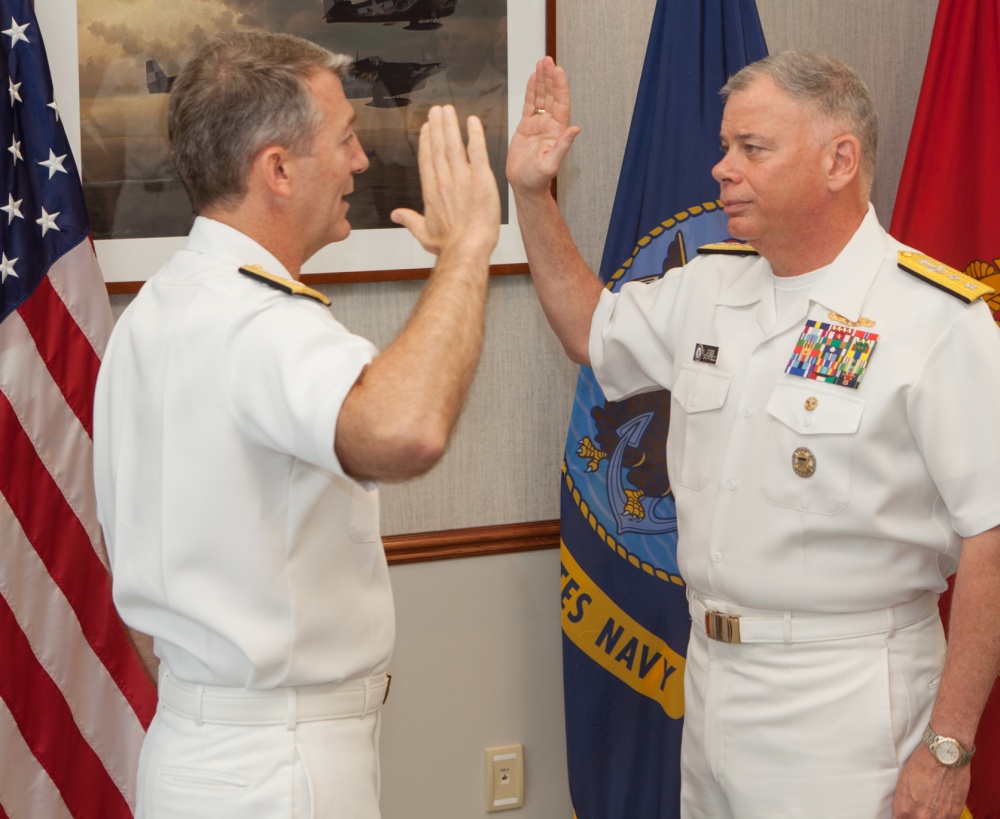 Rear Adm. John B. Nowell (right) is promoted to the rank of vice admiral by Rear Adm. Jamie Sands during a ceremony at the Midway Ceremonial Drill Hall at Naval Station Great Lakes. Navy Photo

Vice Adm. John Nowell was sworn in as the 59th Chief of Naval Personnel last week, taking charge of a community amid a dramatic recruitment and retention push.

The Navy had 332,000 officers and enlisted personnel when Nowell was sworn in in a ceremony at the Navy’s Recruit Training Command at Naval Station Great Lakes, Ill. The Navy projects increasing the force to more than 340,000 active duty personnel by the end of Fiscal Year 2020.

“It is an honor and a privilege to receive this responsibility,” Nowell said in a statement. “I look forward to the challenge of being the Navy’s new chief of naval personnel and carrying on the work of modernizing the personnel side of the Navy to ensure we have the Navy our nation needs.”

Long term, the Navy likely needs to grow even larger to accommodate staffing and maintaining a planned 355-ship Navy. Up to an estimated 35,000 additional sailors would be required to properly run and support a fleet of this size, according to USNI News estimates based on Navy and Congressional Budget Office reports.

At the same time, the Navy is embarking on a large-scale shift in the way the force is trained and educated. A new three-star admiral position, the director of warfighting development (OPNAV N7), will be appointed to run the Navy’s training and education work that had been conducted by the CNP.

Nowell is a 1984 graduate of the U.S. Naval Academy. Before being nominated to replace outgoing CNP Vice Adm. Robert Burke, Nowell worked for Burke as the Navy’s director of military personnel plans and policy.

“John Nowell is a great leader,” Burke said in a statement. “Having served as director of military personnel, plans and policies, he understands the needs of our sailors and families, and is the perfect person to continue serving our Navy as the chief of naval personnel.”

Burke was recently confirmed by the Senate to be the next vice chief of naval operations.

Previously, Nowell was the commander of Expeditionary Strike Group 7 and director of strategy, resources and plans for U.S. 6th Fleet. Nowell has served aboard several surface warships, including commanding USS Porter (DDG-78).

Rear Adm. Scott Conn was confirmed to be vice admiral

Rear Adm. Ross Myers was confirmed to be vice admiral

Rear Adm. Sean Buck was confirmed to be vice admiral

Rear Adm. James Kilby was confirmed to be vice admiral