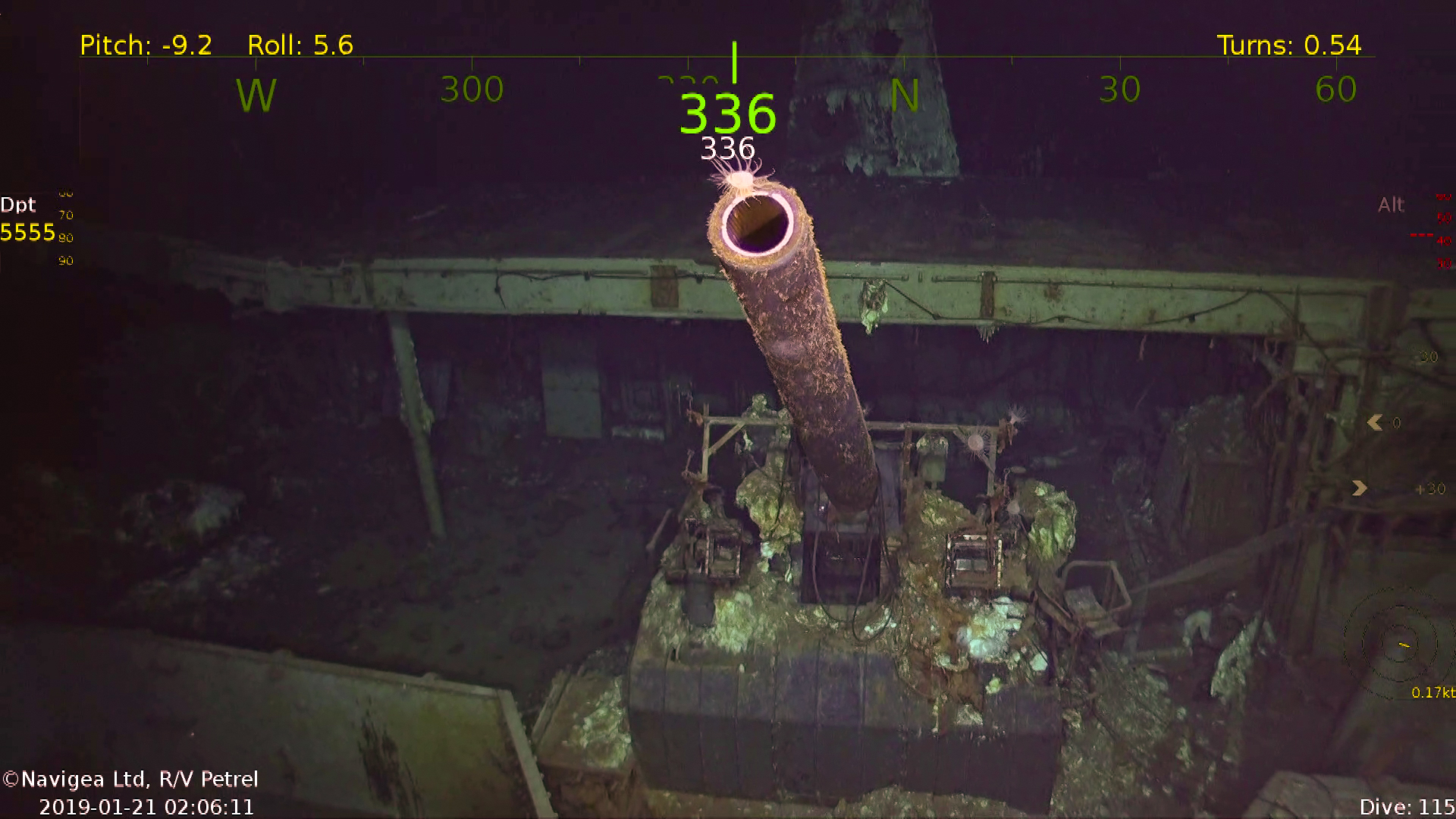 This post has been updated to include a statement by Vice Chief of Naval Operations Adm. Bill Moran.

The late Paul Allen’s research team discovered the wreckage of World War II’s USS Hornet (CV-8), the aircraft carrier that launched the Doolittle Raid and participated in the Battle of Midway before being sunk in the Battle of the Santa Cruz Islands by Japanese dive bombers, torpedo planes and ship-launched torpedoes.

“Wreckage of the USS Hornet was discovered in late January 2019, 5,330 meters (nearly 17,500 feet) below the surface, resting on the floor of the South Pacific Ocean,” the R/V Petrel team and parent company Vulcan announced online.

“We had the Hornet on our list of WWII warships that we wanted to locate because of its place in history as a capitol carrier that saw many pivotal moments in naval battles,” Robert Kraft, director of subsea operations for Vulcan, said in the announcement. “Paul Allen was particularly interested in aircraft carriers so this was a discovery that honors his memory,” Kraft said of Microsoft co-founder and philanthropist Paul Allen, who died last year. 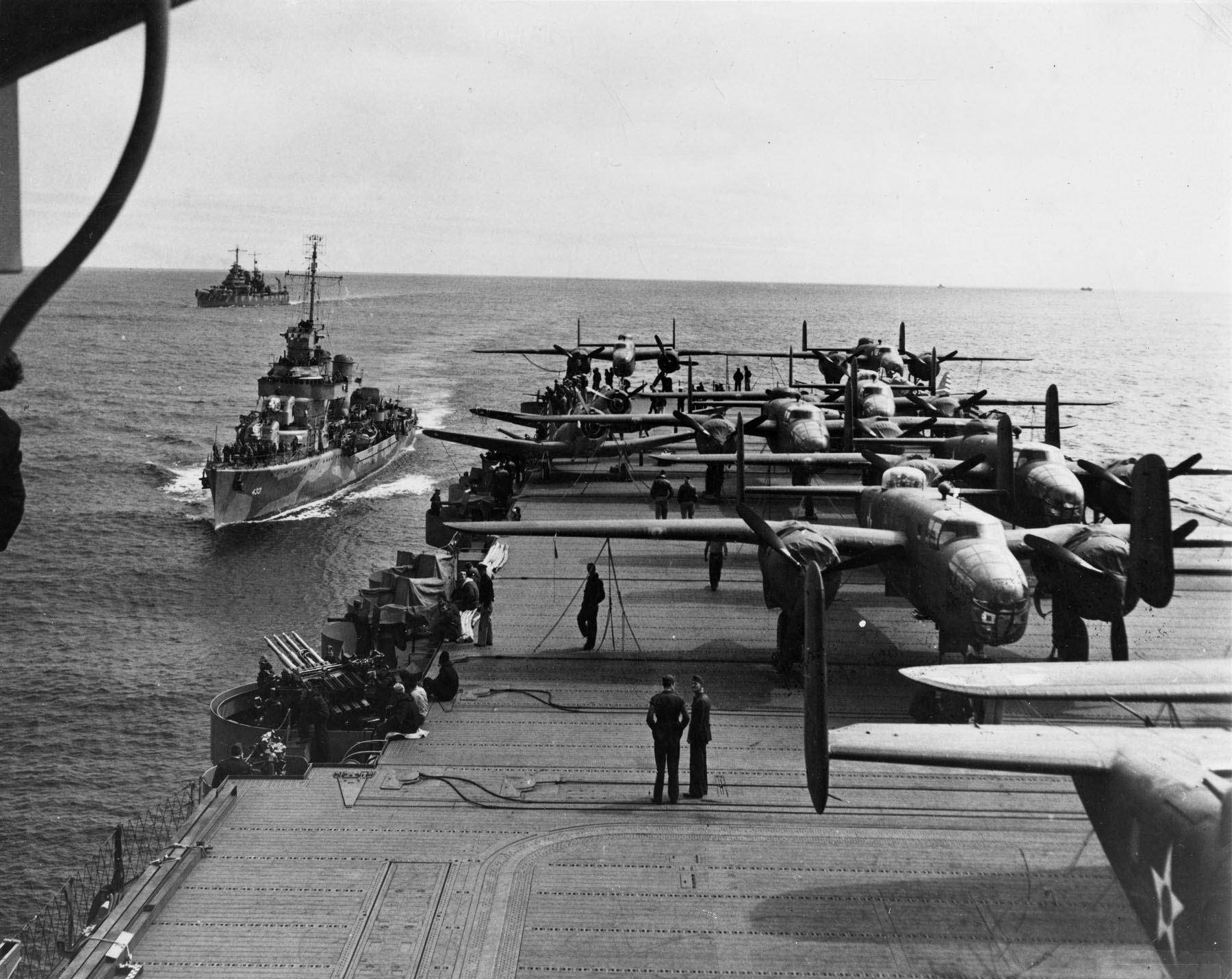 A pair of alert escorts follow the USS Hornet with carried 16 B-25 bombers for the ‘Doolittle Raid’ on April 18, 1942. US Air Force Photo

Vice Chief of Naval Operations Adm. Bill Moran, a naval aviator himself, said Tuesday morning that “Naval aviation came of age in World War II and American sailors today continue to look to and draw inspiration from the fighting spirit of ships and crews like USS Hornet (CV 8). Although her service was short-lived, it was meteoric. In the dark days following the Japanese surprise attack on Pearl Harbor, she and the Doolittle Raiders were the first Americans to punch back at Japan, giving hope to the nation and the world when things looked bleakest. She was there when the American Navy turned the tide in the Pacific at the Battle of Midway, and she was there when America started the long drive to Tokyo in the Solomon Islands. Mortally wounded during the vicious campaign at Guadalcanal and abandoned after all attempts to save her failed, she was finally sent below by the Japanese destroyers Akigumo and Makigumo. As America’s Navy once again takes to the sea in an uncertain world, Hornet‘s discovery offers the American sailor a timeless reminder of what courage, grit, and commitment truly look like. We’d be wise as a nation to take a long, hard look. I’d also like to thank the crew of Petrel for their dedication in finding and honoring her sacrifice.”

The crew of Allen’s ship, R/V Petrel, earlier this month announced the discovery of Japanese ship IJN Hiei on Feb. 6. Hiei was found near Hornet, both in the southern Solomon Islands. Petrel goes on expeditions and searches multiple known or expected wreckage sites in the same at-sea period, often announcing a cluster of discoveries in short succession. Last spring, the billionaire and his research team announced the discovery of carrier USS Lexington (CV-2), cruiser USS Juneau (CL-52) and cruiser USS Helena (CL-50) in March and April. 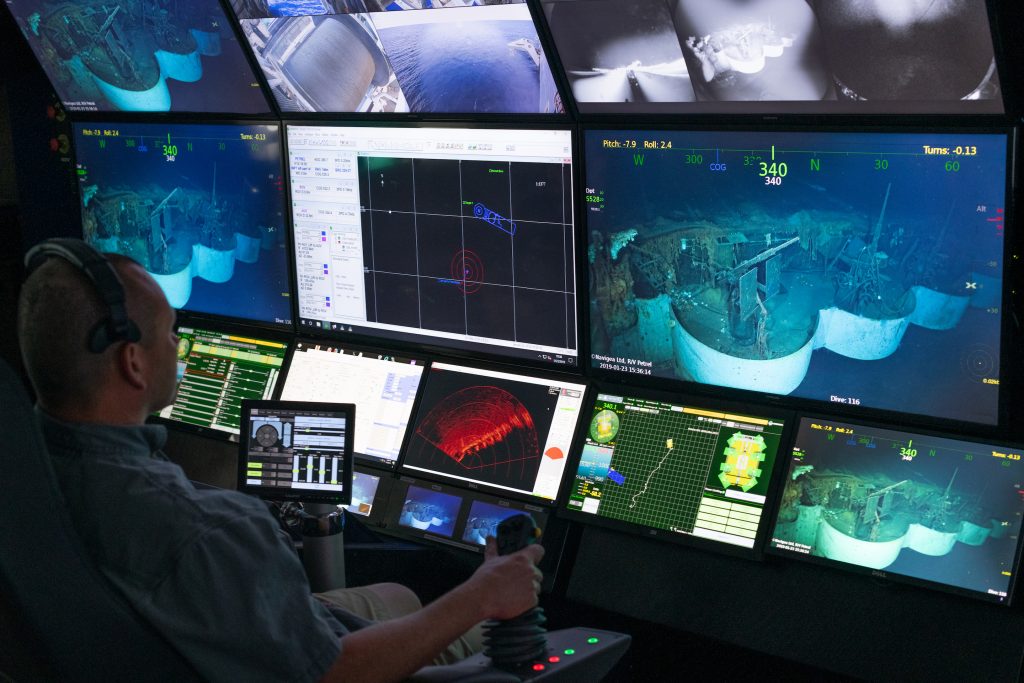 Exploring the wreck where it rests 5,000 m below the surface. R/V Petrel photo.

According to the Vulcan announcement, “The 10-person expedition team on the 250-foot R/V Petrel were able to locate the Hornet’s position by piecing together data from national and naval archives that included official deck logs and action reports from other ships engaged in the battle. Positions and sightings from nine other U.S. warships in the area were plotted on a chart to generate the starting point for the search grid. In the case of the Hornet, she was discovered on the first dive mission of the Petrel’s autonomous underwater vehicle and confirmed by video footage from the remotely operated vehicle, both pieces of equipment rated to dive down to 6,000 meters.” 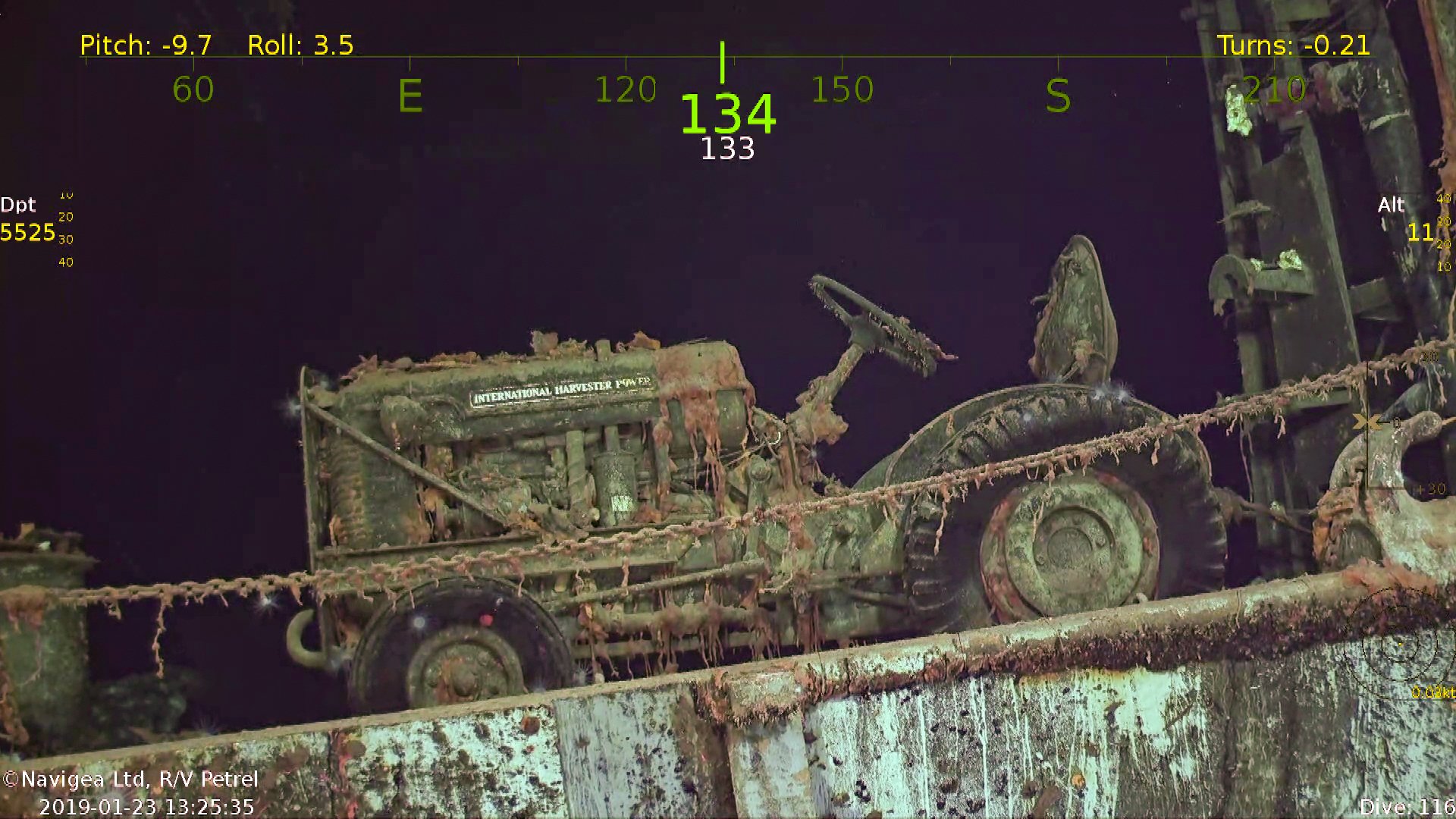 Hornet sank months later, in October 1942 in the Battle of Santa Cruz Island in a fight to push Japanese forces out of the southern Solomon Islands. Japanese dive bombers and torpedo planes fired heavily upon the carrier, setting fire to the ship and irreparably damaging the hull. Other nearby U.S. Navy ships attempted to rescue the crew, and destroyers USS Mustin (DD-413) and USS Anderson (DD-411) tried to scuttle Hornet with torpedoes and gunfire. Hornet still wouldn’t sink, and with more Japanese warships approaching the American destroyers fled the burning carrier. Japanese destroyers finally sank Hornet about 24 hours after the initial bombing of the carrier began.