These were the approximate positions of the U.S. Navy’s deployed carrier strike groups and amphibious ready groups throughout the world in 2018, based on Navy, public data and USNI News records. In cases where a CSG or ARG is conducting disaggregated operations, the charts reflect the locations of the capital ship. 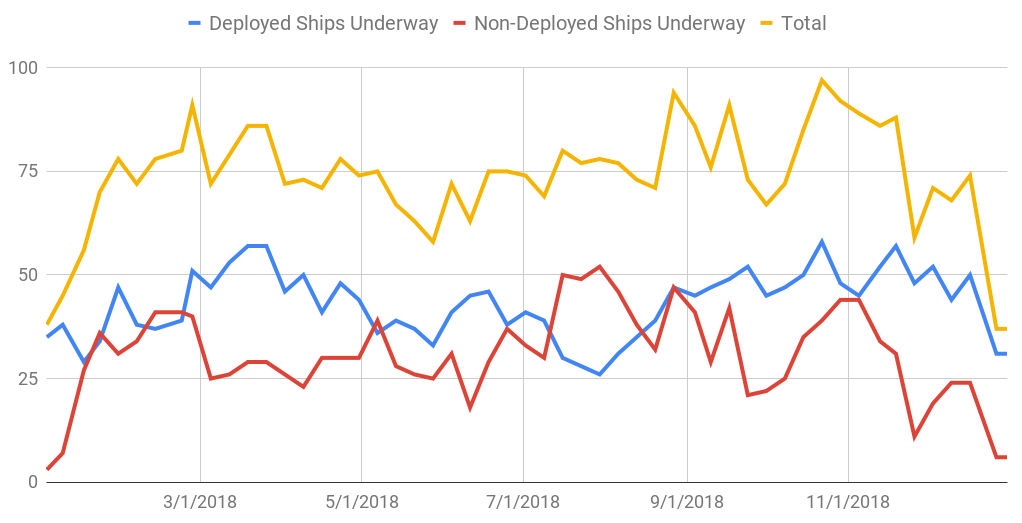 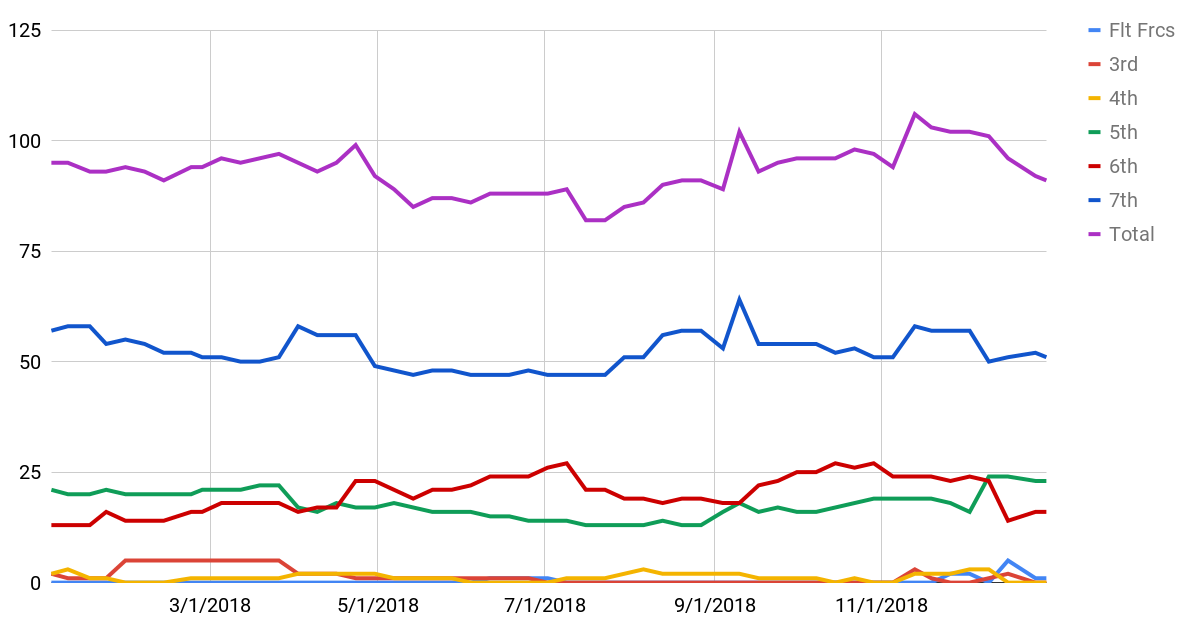 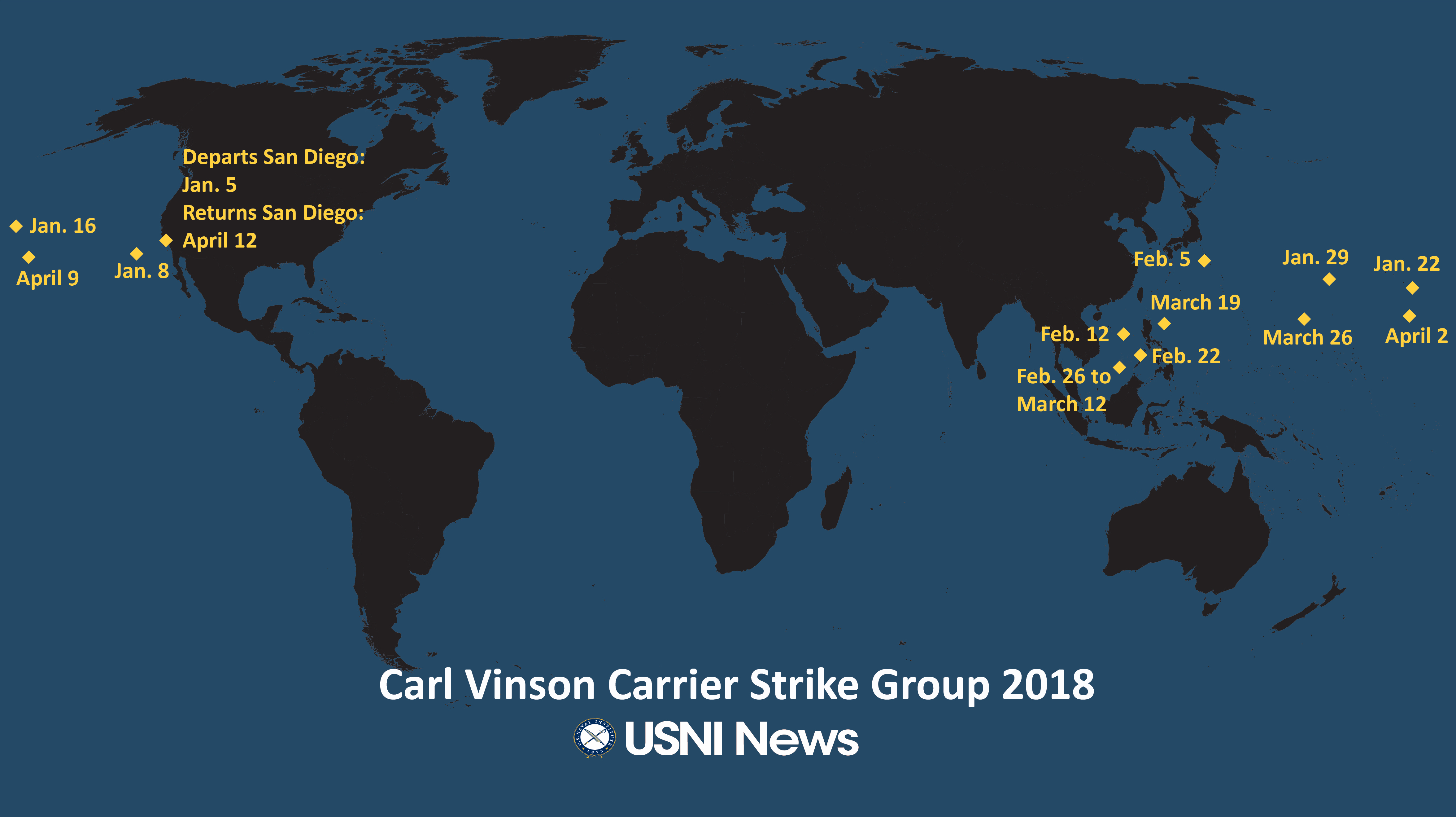 On Jan. 5, USS Carl Vinson (CVN-70) deployed with Carrier Air Wing 2 for a brief three-month deployment to the Western Pacific while forward-deployed carrier USS Ronald Reagan (CVN-76) was in maintenance in Japan. During the deployment, the strike group made a port call in Vietnam – the first for a carrier since the end of the Vietnam War. The strike group returned from the deployment on April 12. Vinson went underway briefly from July to early August as part of the Rim of the Pacific 2018 exercise. 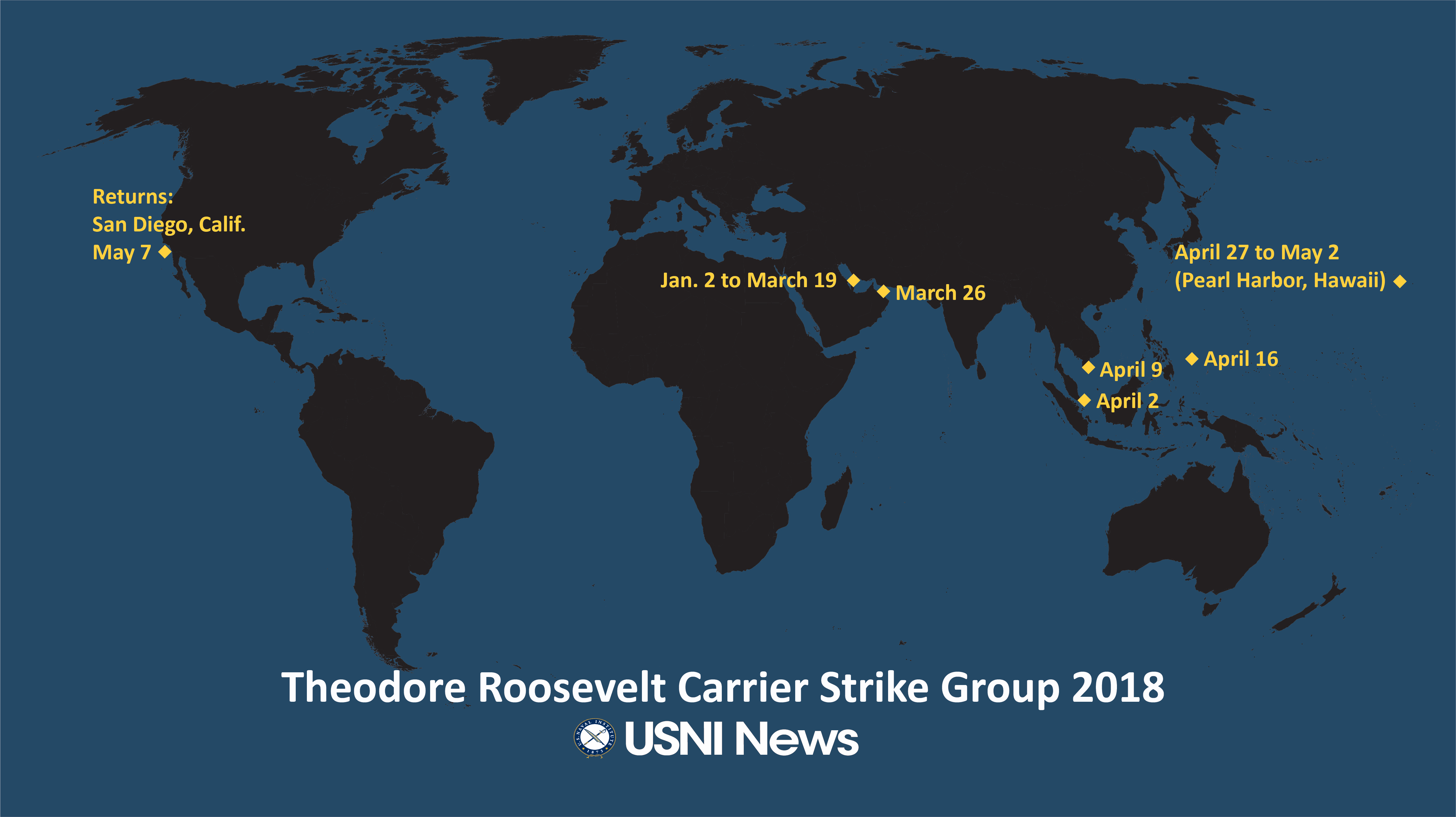 USS Theodore Roosevelt (CVN-71) left San Diego, Calif., in October with Carrier Air Wing 17 and operated for four months in the Middle East supporting the air war over Afghanistan and the fight against ISIS. While in the region, strike fighters from the carrier flew missions over both Syria and Afghanistan on the same day. When Roosevelt left the Persian Gulf in March, it led to the longest gap without a carrier in the region since 2001. 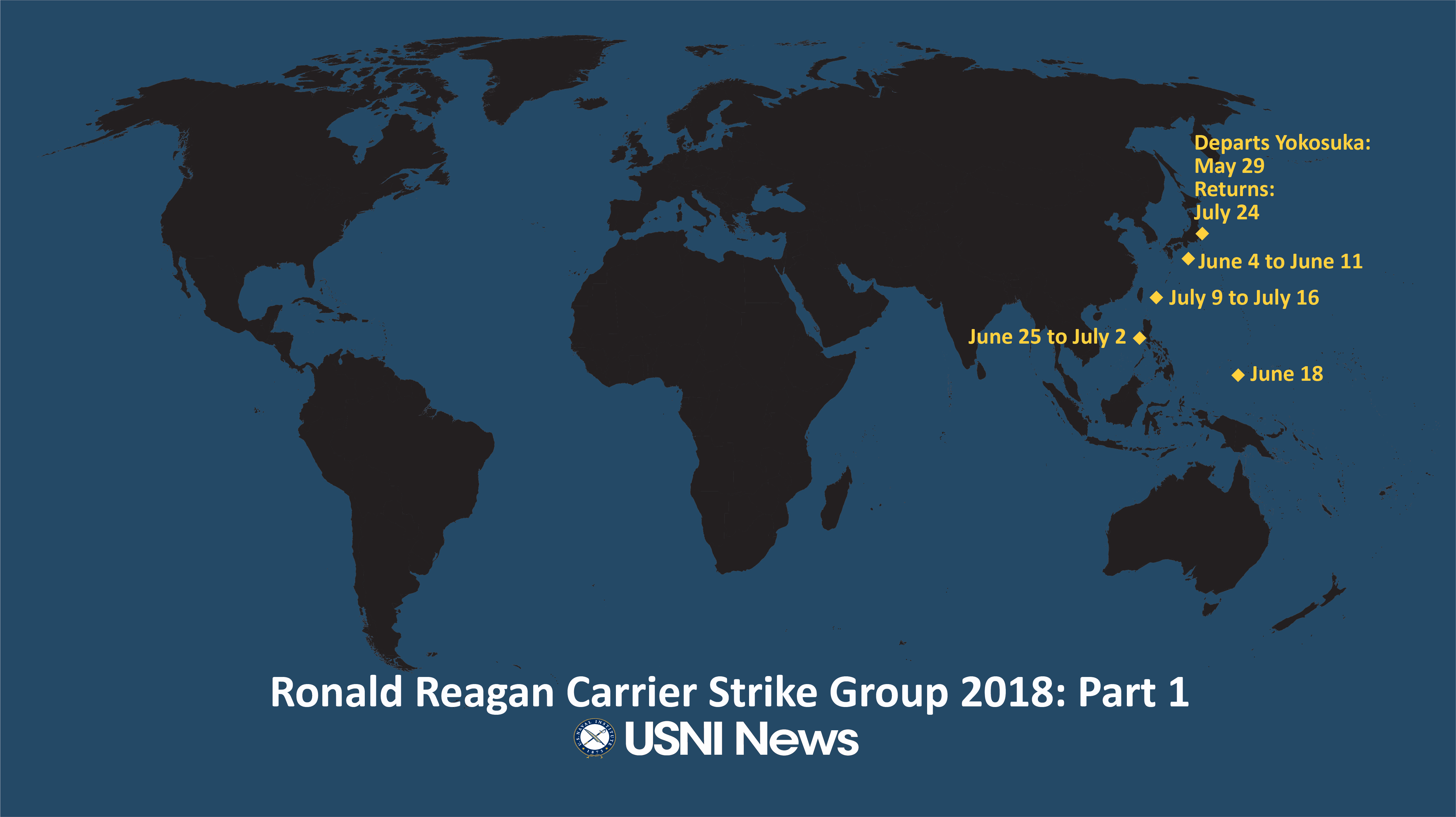 The Navy’s forward-deployed carrier had two Western Pacific patrols in 2018 with Carrier Air Wing 5, following an annual yard maintenance period at the beginning of the year. The carrier trained with allies and was the carrier strike group for the Navy’s biennial high-end Valiant Shield exercise off Guam. 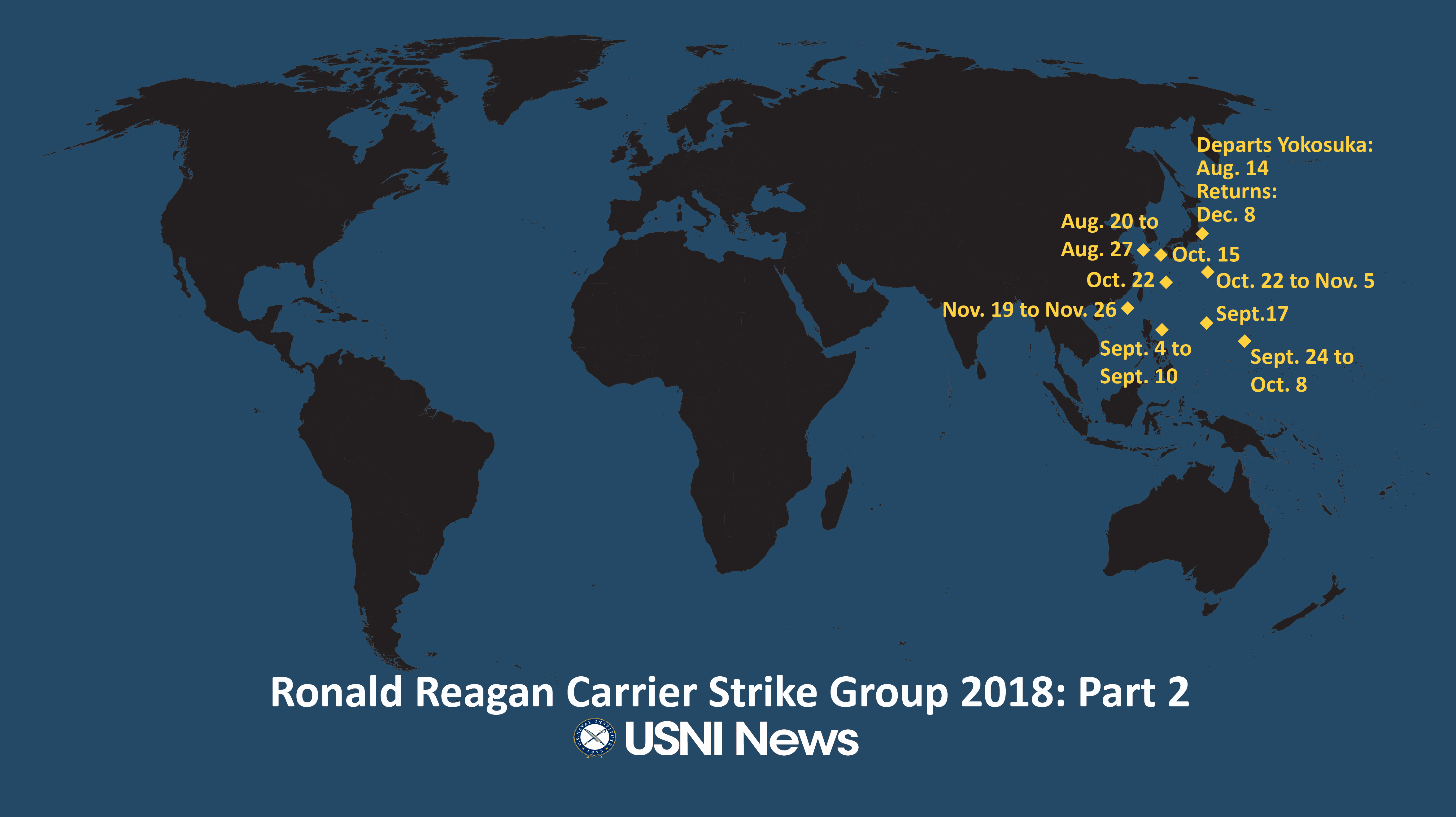 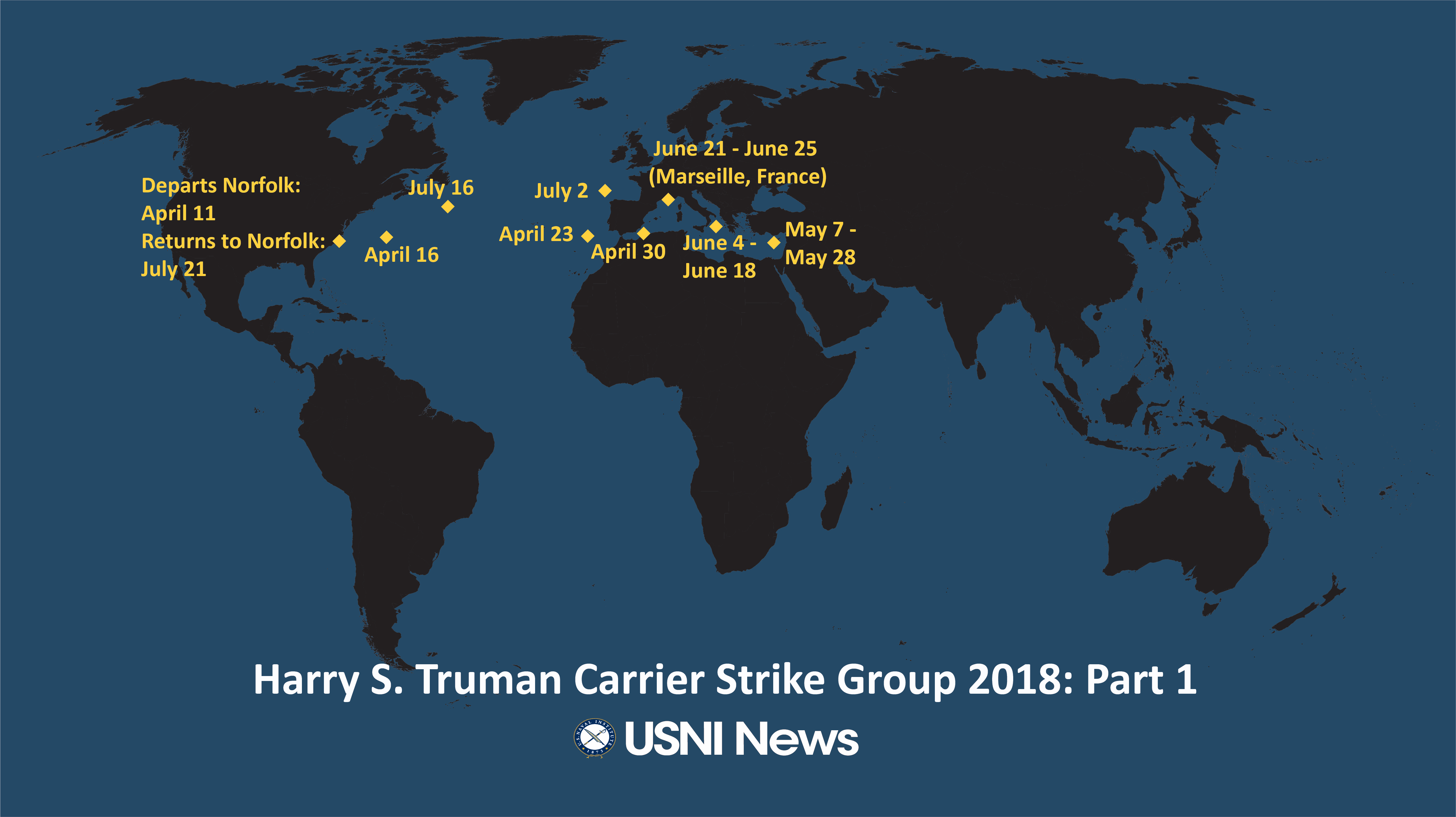 The Harry S. Truman CSG deployment was a major break from 15 years of carrier deployments that focused on the Middle East and supporting the air wars over Iraq and Afghanistan. With the exception of anti-ISIS strikes over Syria launched from the Eastern Mediterranean in the first half of the deployment, the Truman CSG spent the bulk of its time operating in the Atlantic, off of Northern Europe and the Mediterranean. The CSG came home to Naval Station Norfolk, Va., for a month for a “working port visit” before heading back out for more training and operations in Europe, including the massive Trident Juncture exercise off the coast of Norway. 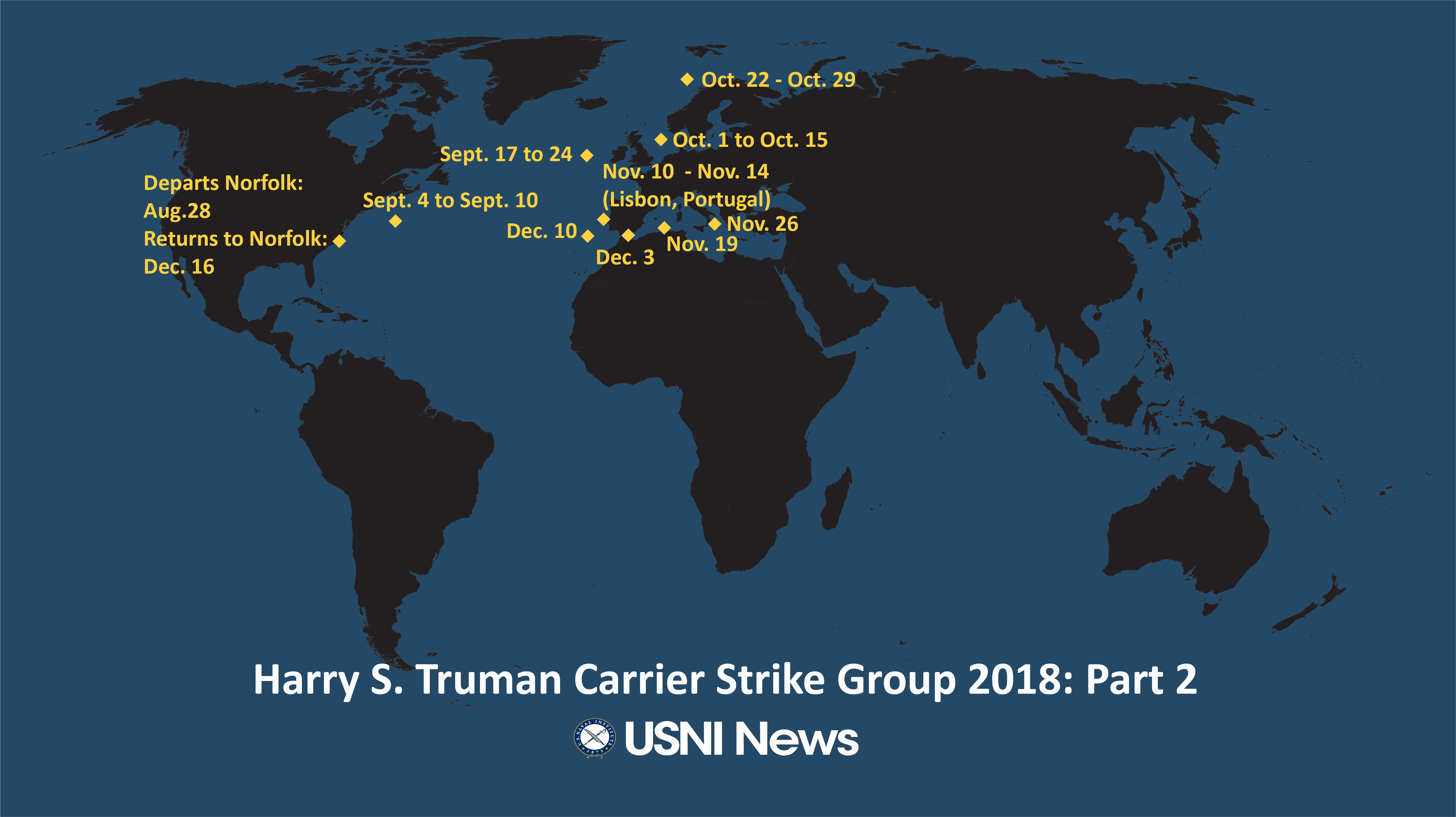 “We’re operating in the support of the National Defense Strategy, and we’re trying to be strategically predictable and operationally unpredictable. And as such, the first phase of our deployment we operated in the East Med, and many would have expected the next step would have been to go through to 5th Fleet, and as a matter of fact that was what was originally planned,” Strike Group Commander Rear Adm. Gene Black told reporters. 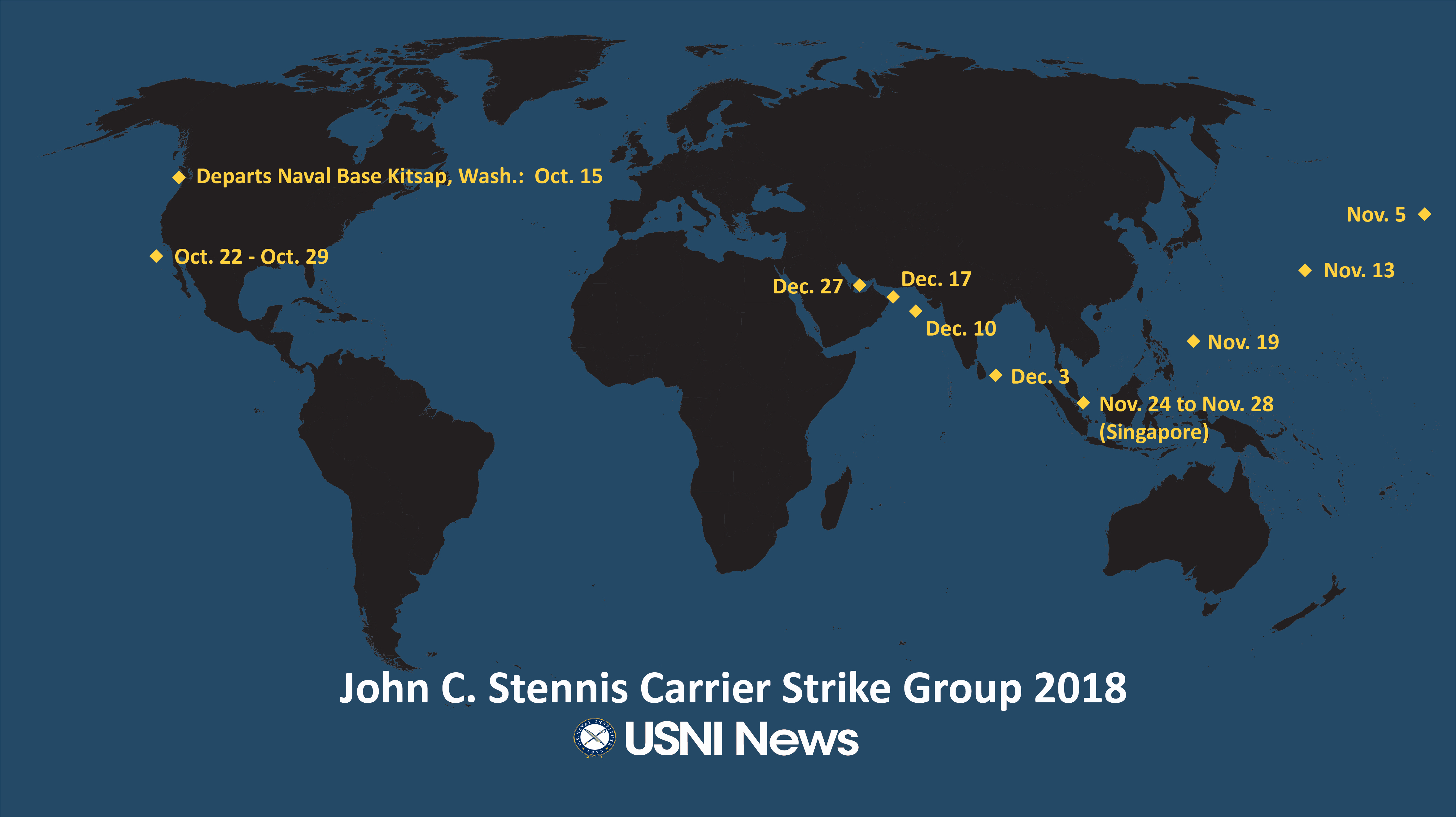 The Stennis CSG left Naval Base Kitsap, Wash., for a deployment and homeport change with no public notice in mid-October. USS John C. Stennis (CVN-74) will shift its homeport to Norfolk ahead of a planned four-year refueling and complex overhaul (RCOH) at Huntington Ingalls Industries’ Newport News Shipbuilding in Virginia. Stennis and USS Ronald Reagan (CVN-76) operated together in November. In mid-December, Stennis and USS Essex (LHD-2) conducted joint operations in the North Arabian Sea before the carrier entered the Persian Gulf, the first carrier to do so since Roosevelt left in March.

The Essex ARG/MEU departed with the first U.S.-based F-35B Lighting II Joint Strike Fighter squadron – the “Wake Island Avengers” of Marine Fighter Attack Squadron (VMFA) 211 – with no public notice in mid-July. The ARG/MEU entered the U.S. 5th Fleet area of operations in September. Late that month, F-35s from the VMFA-211 conducted the first combat strike for the platform in a mission over Afghanistan. In October, USS Essex (LHD-2) entered the Persian Gulf, the first U.S. capital ship to operate in the region since the departure of USS Iwo Jima (LHD-7) in August. Essex conducted joint operations with USS John C. Stennis (CVN-74) in December in the North Arabian Sea. 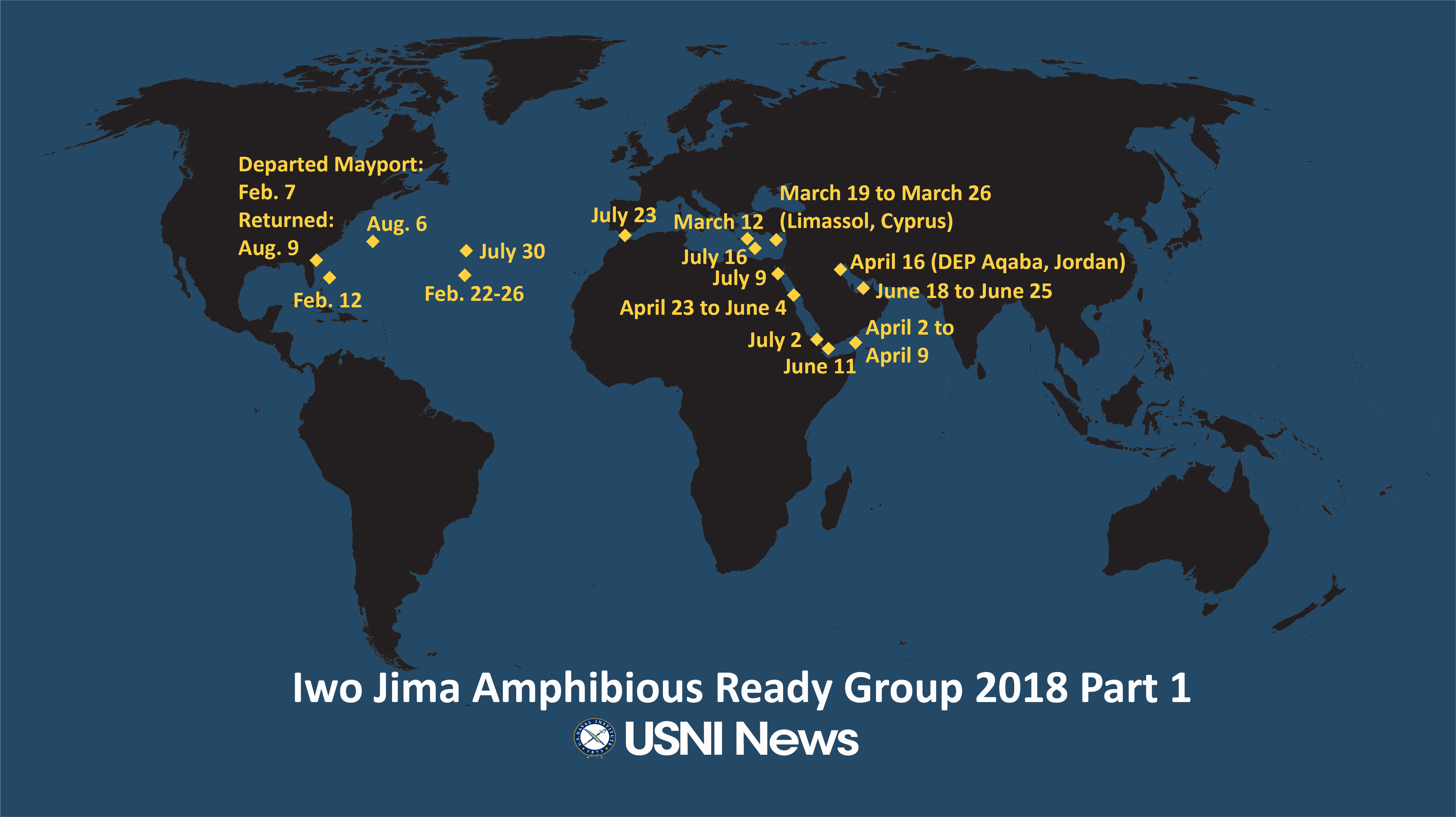 Early in 2018, USS Iwo Jima (LHD-7), dock landing ship USS Oak Hill (LSD-51) and amphibious transport dock USS New York (LPD-21) left Naval Station Mayport, Fla., for a six-month deployment to Europe, Africa and the Middle East. The ARG operated in a disaggregated fashion, with Oak Hill supporting the BALTOPS exercise in the Baltic Sea while New York spent time in the Mediterranean and Iwo Jima operated in the Red Sea and the Persian Gulf.
“This deployment was the most high-tempo one I’ve experienced in my 25-year naval career,” Capt. Joseph O’Brien, Iwo Jima’s commanding officer, said in a statement. “The entire Navy and Marine Corps team performed extraordinarily well in an incredibly dynamic environment throughout the deployment.” 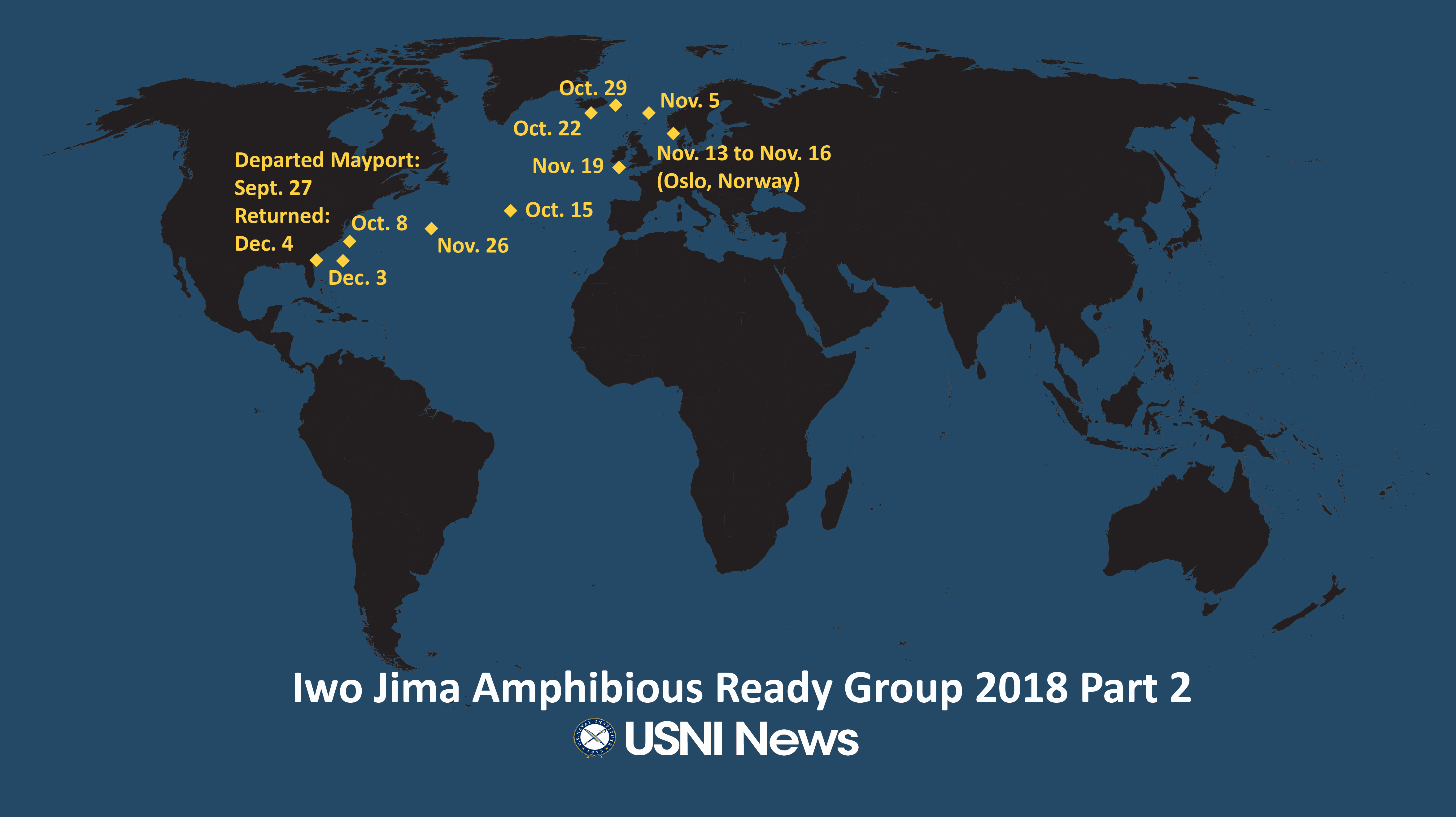 Iwo Jima, New York and dock landing ship USS Gunston Hall (LSD-42) deployed with the 24th MEU to participate in the Trident Juncture exercise off the coast of Norway. The heavy seas of the North Atlantic tested the ARG/MEU to the point where Gunston Hall suffered a Class A mishap when a LCU in the ship’s well deck broke loose and forced the ship back to Iceland for repairs. New York returned to Iceland alongside Gunston Hall as a precautionary measure. The group returned to its homeport on Dec. 4. 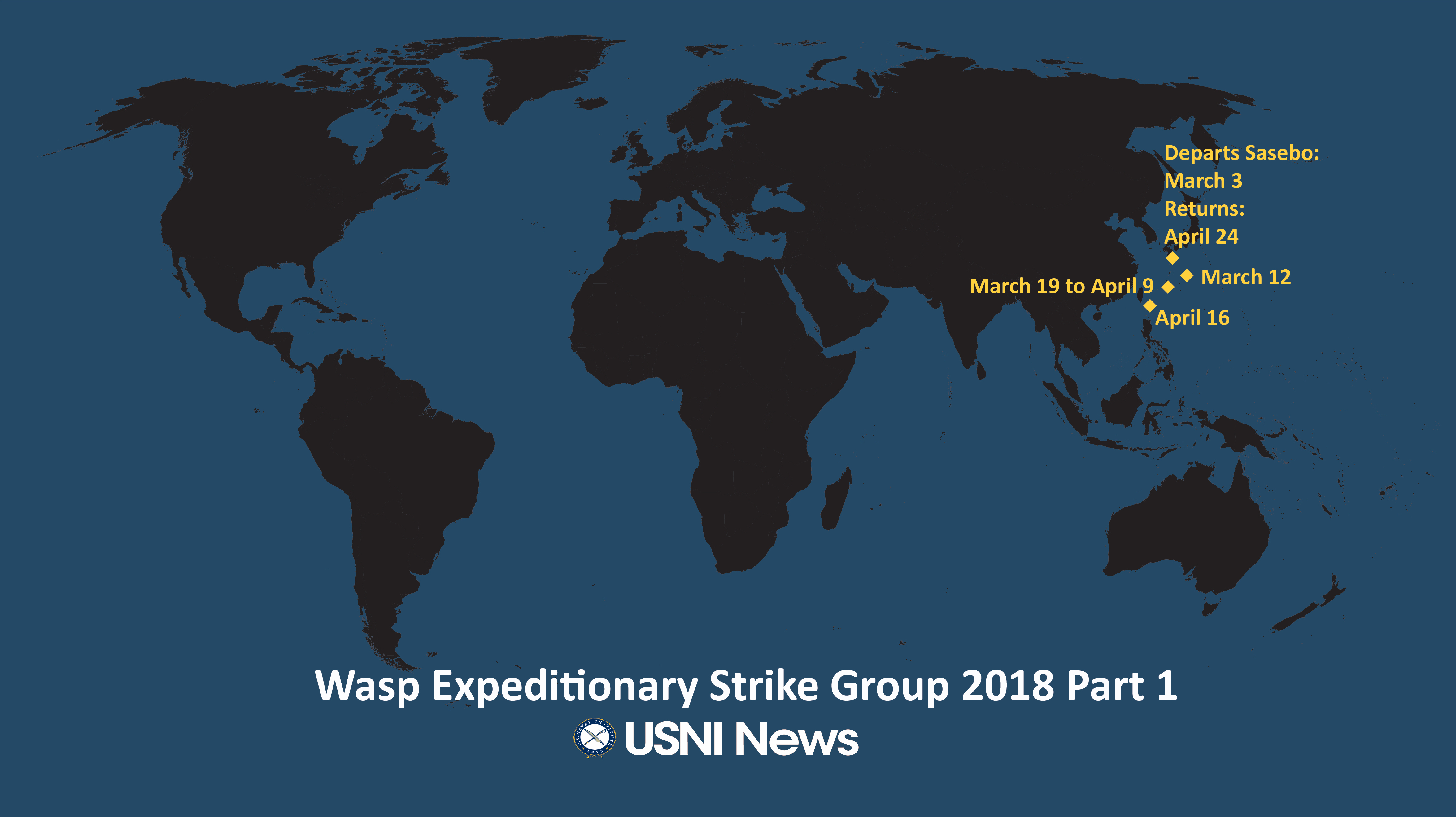 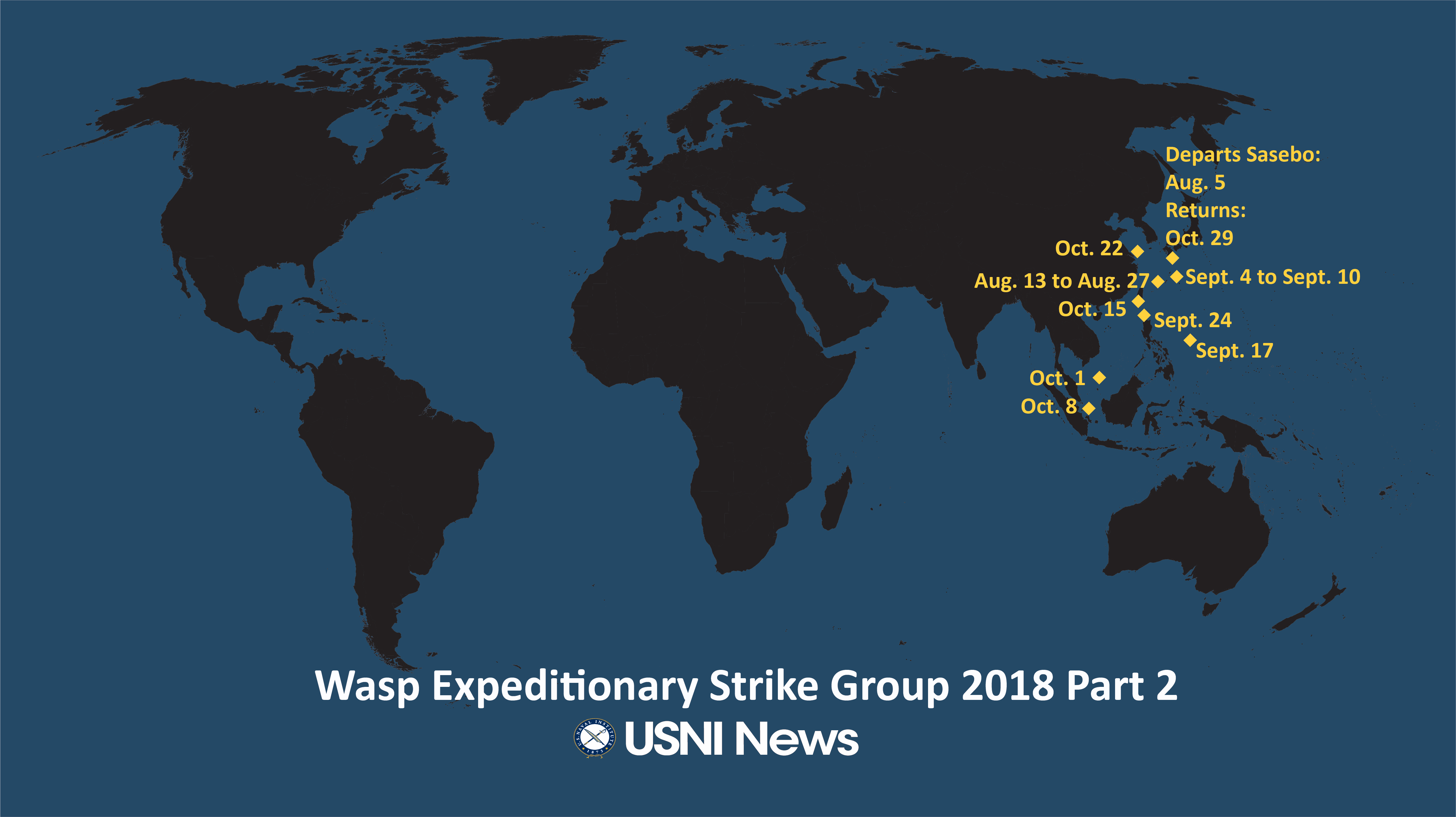 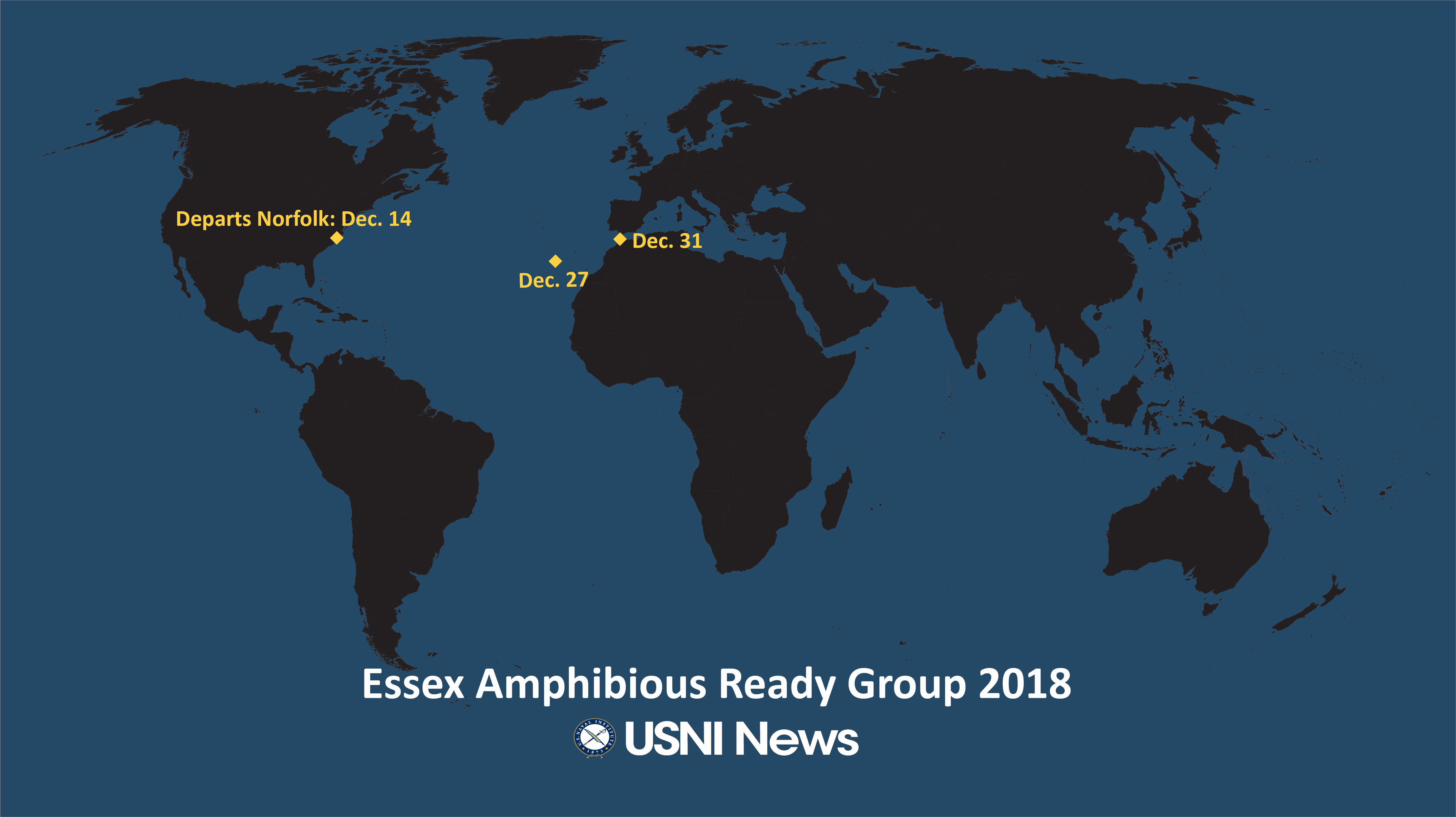 USS Kearsarge (LHD-3), USS Arlington (LPD-24) and Mayport, Fla.,-based Whidbey Island-class dock landing ship USS Fort McHenry (LSD-43) left the East Coast with the 22nd MEU. The ARG participated in the first ARG Surface Warfare Advanced Tactical Training (SWATT) on the East Coast. The SWATT exercise, conducted during the summer, was led by warfare tactics instructors (WTIs) from the Naval Surface and Mine Warfighting Development Center (SMWDC). A SWATT is designed to help the ARG elements synchronize their warfighting capabilities before starting integrated training with the MEU. The ARG entered the 6th Fleet area of operations in late December.