The Harry S. Truman Carrier Strike Group is in the midst of an unusual deployment – currently operating in the North Sea, in Act II of its deployment that had a working port visit intermission – but the strike group commander said the deployment has allowed his sailors to focus on high-end warfare and train in ranges not usually available to them.

Rear Adm. Gene Black told a small group of reporters today that “we’ve been privileged to take part in some exciting and ground-breaking operations here in the U.S. Sixth Fleet area of operations” and that “we’ve made the most of operating in an area which American aircraft carriers don’t typically frequent.”

Still, he acknowledged the role undersea warfare has had in the strike group’s training and missions.

“We spent a lot of time training to our undersea warfare capabilities in our COMPTUEX (composite training unit exercise) and our certification exercise. As you know, I’ve been doing this for a long time, and over the course of my career it’s been fascinating to watch us go from a very heavy emphasis on undersea warfare to then many years where there clearly wasn’t a need for it, and now it’s back. And I will tell you that the training during our COMPTUEX was as robust and demanding as I’ve ever seen for undersea warfare, and the trainers that came out from Strike Group 4 and the Undersea [Warfighting] Development Center were as fine as I’ve ever seen – and I felt like, with the capabilities the strike group brings to sea and the training, that we’re as ready as any strike group that sails today to deal with the undersea threat,” he told USNI News during the media phone call today. 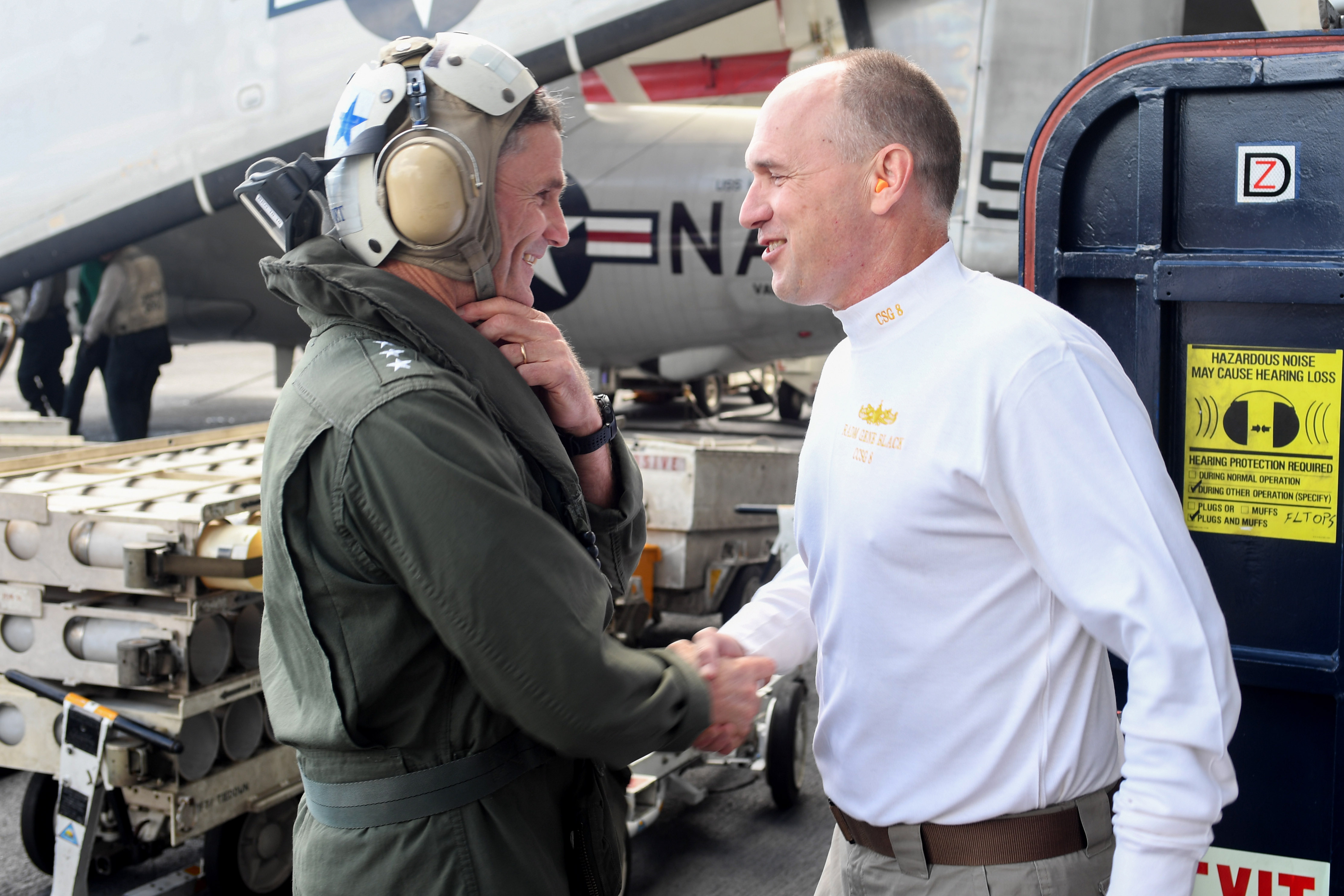 Though the missions being asked of the Harry S. Truman CSG in the northern edges of Europe are not as dependent on the air wing as the traditional mission over the last 17 years – air strikes in support of ground wars in Afghanistan, Iraq and Syria – Black noted that the air wing has found ways to stretch itself and train to the high end of warfare.

In the first phase of the deployment, the air wing flew from the carrier in the Adriatic Sea to the Baltic Sea to participate in the BALTOPS 2018 exercise, flew with the Italian Air Force over the Mediterranean Sea for several days of air combat training, and partnered with French pilots during French Air Defense Week.

And, Black said, pilots are finding opportunities to work with the U.S. Air Force, “which is particularly appealing to us because, in the right forum, we can do the highest-end training” with their joint force partners.

Additionally, he said, operating in an unusual location for a carrier strike group opens up new opportunities to visit training ranges that American naval forces wouldn’t typically get to.

“I would tell you that because of the different places we’ve been, we’ve had opportunities to train to things other strike groups haven’t had the opportunity in quite some time, and I am very very confident in our readiness to execute whatever mission we’re tasked with, wherever on the globe we get sent,” he said.

Black noted in the phone call that “we’ve pretty much shattered that model” of carrier strike groups from the East Coast sailing across the Atlantic and through the Mediterranean en route to the Persian Gulf, where they’d launch sorties in support of ground operations and then make a couple port calls in U.S. 6th Fleet on the way back home. He said repeatedly that this deployment is the very essence of Dynamic Force Employment in support of the National Defense Strategy,

He noted that, in fact, the Harry S. Truman CSG was originally supposed to make it to U.S. 5th Fleet in the first phase of its deployment, but in an effort to achieve operational unpredictability those plans were changed in favor of exercising in the Northern Atlantic. As a result, the air wing flew 210 combat sorties in support of Operation Inherent Resolve in its first 100 days at sea – from the Mediterranean, not the Persian Gulf – and then the strike group turned its attention back to Europe.

“We’re operating in the support of the National Defense Strategy, and we’re trying to be strategically predictable and operationally unpredictable. And as such, the first phase of our deployment we operated in the East Med, and many would have expected the next step would have been to go through to 5th Fleet, and as a matter of fact that was what was originally planned,” he said.

The change in plans shows “that we can operate just about anywhere on the globe. And in this particular deployment, we are reinforcing our relationships with NATO partners and allies by operating with them,” Black continued.
“You’re seeing flexible combat power, operationally unpredictable, reinforcing relationships with our allies. Absolutely the tenets of Dynamic Force Employment and what we’re trying to do on this deployment.” 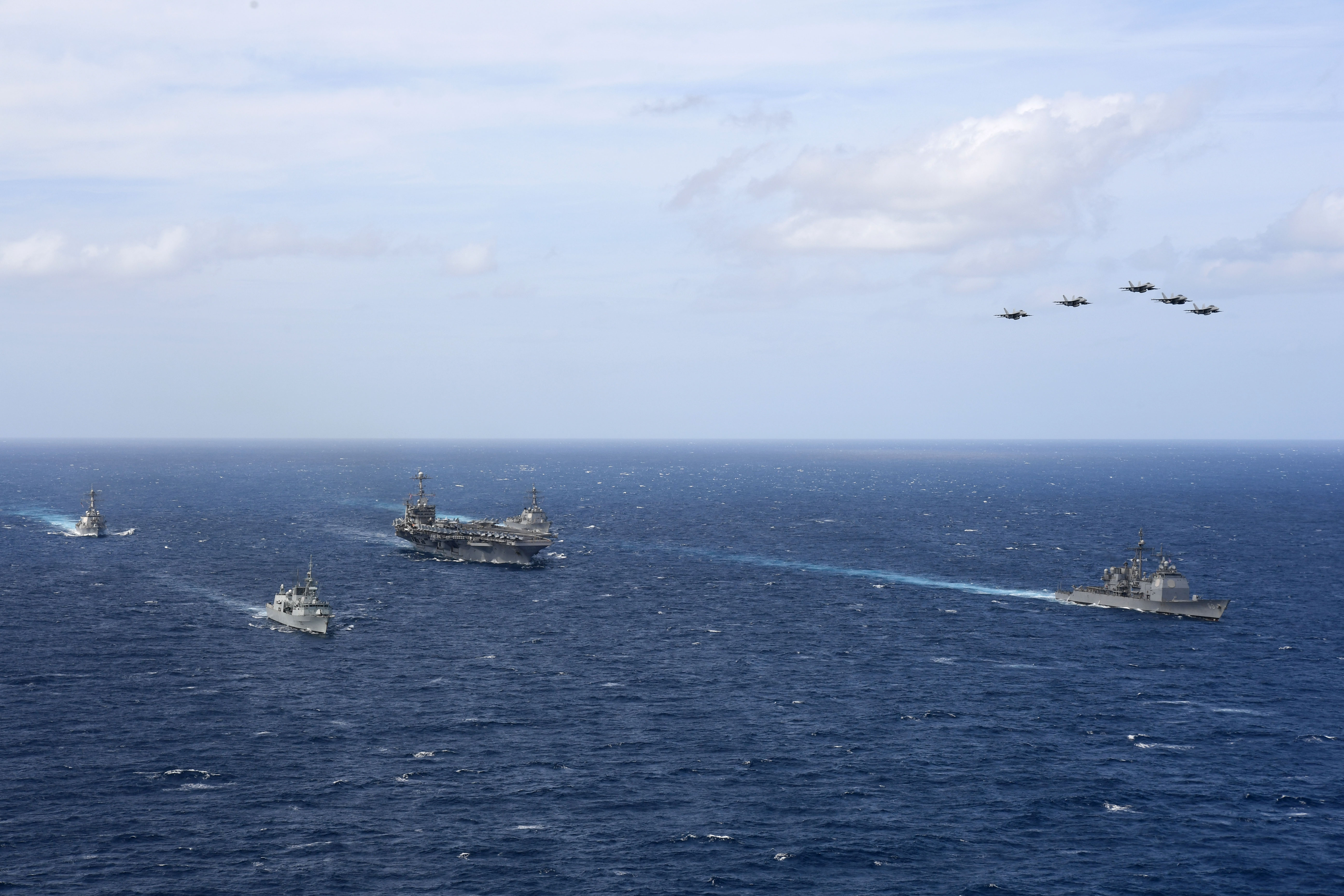 Chief of Naval Operations Adm. John Richardson foreshadowed this Truman CSG deployment to USNI News in May, saying that, “if you think about all the ways you could increase the power of the Navy, it’s not necessarily going forward, disaggregating the strike group and doing those sorts of operations. Maybe we increase naval power by bringing the strike group back a little early, and we do high-end strike-group-on-strike-group exercises or training like that. And then you really kind of enter a, I’m trying out some things that are really on the cutting edge of naval warfare. And then the strike group pulls in and they get a little time with their families, time to go to schools, that sort of thing. And then maybe they surge forward – so you’re not gone for that long period of time, maybe you can do a little maintenance, and so we see there’s opportunities.”

The deployment has not been without its challenges, the admiral said, weather being chief among them.

“The weather’s a challenge; the ships are riding beautifully, nobody builds a better ship than the U.S. Navy, and they’re being handled and operated very very well,” he said.
“And we’ve also shown that we can operate in fairly heavy seas, and we’re gaining confidence in that every day.”

Regarding any incidents with the Russian Navy, Black said “our interactions with the Russians were limited to the Eastern Mediterranean [in the first phase of the deployment]. They’re professional mariners and aviators, and they handled their ships and aviators as such. We carried out our mission; they carried out theirs. They have as much a right to international waters as we do, and on this phase of our deployment we haven’t had any interactions at all.” 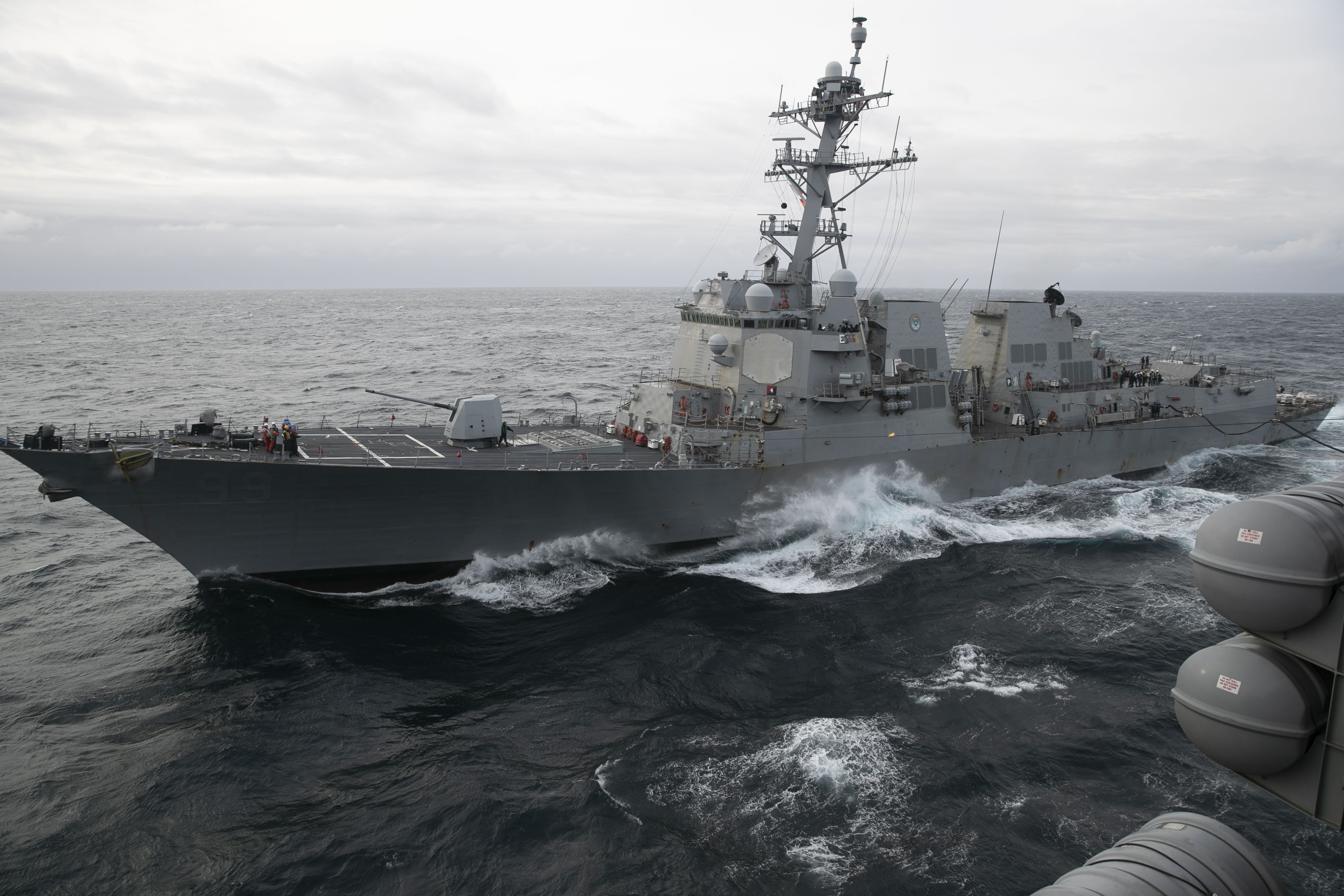 Though he would not discuss future activities the strike group will take part in, he did stress the importance of working with allies and partners to this deployment. He noted that in the first part of the deployment the strike group interacted with “allies and friends in two distinct parts of the globe, enhancing our ties with Morocco, Egypt and Italy, as well as France, Germany, and the UK.” After a six-week working port visit to Norfolk before heading back to sea, the strike group conducted dual-carrier operations with USS Abraham Lincoln (CVN-72) and then worked with the Royal Canadian Navy off the coast of Halifax. Since making it to the 6th Fleet area of responsibility, he said the strike group has hosted distinguished visitors from Iceland while passing by the country and from Poland and Lithuania yesterday, and will host officials from Sweden and Norway tomorrow and from the United Kingdom when the ships pull into a British port later on.

“We have demonstrated the inherent flexibility and capability of carrier strike groups to operate in any waters we are ordered to, reassuring our European allies both through our presence and by our training and operations, which increase our ability to operate effectively together,” Black said.
“We stand ready to answer the call anytime, and anywhere, any mission.”