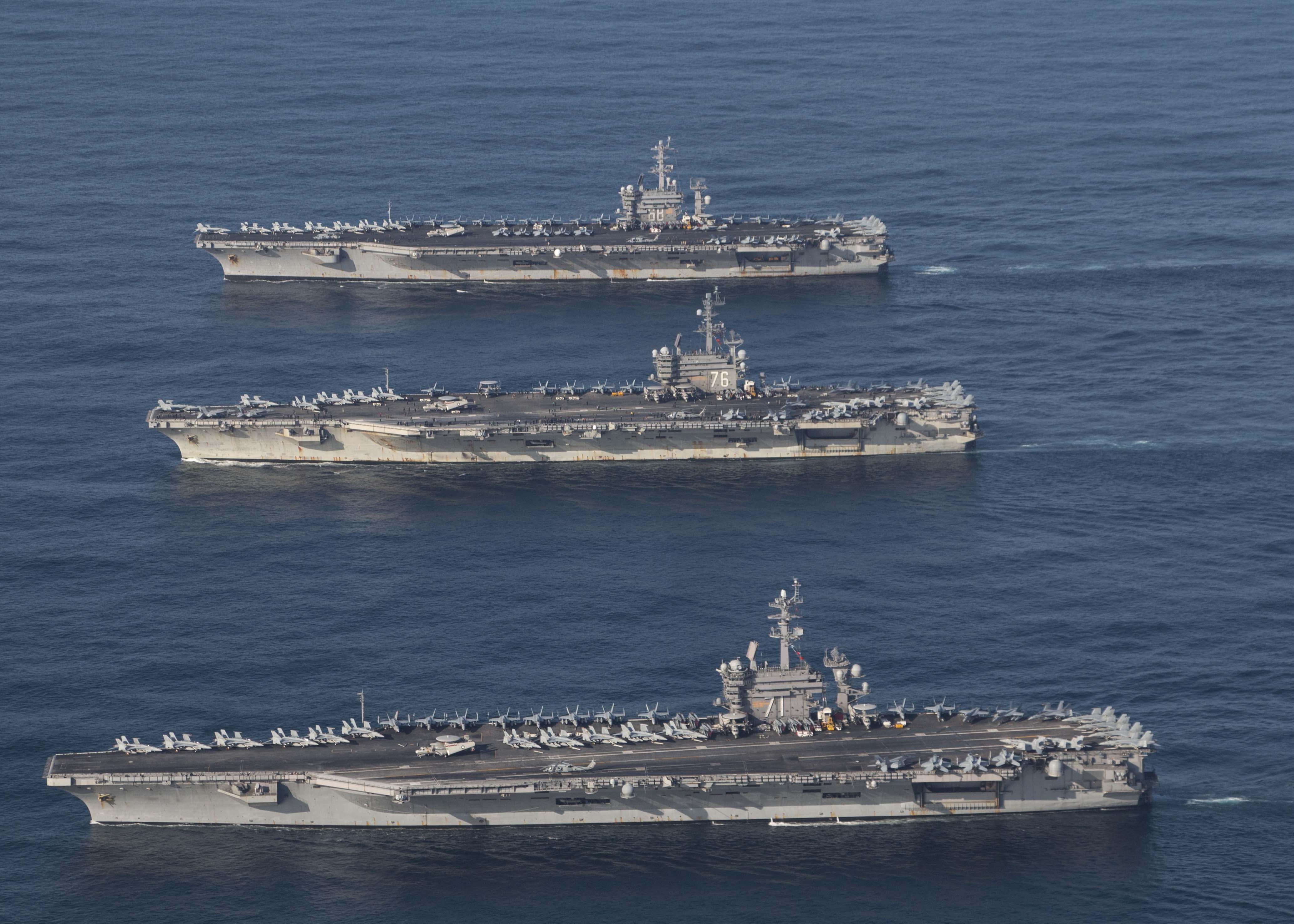 ABOARD USS GEORGE H.W. BUSH — As the Navy looks at shaking up its deployment patterns to become more responsive to world events and more unpredictable to adversaries, one key benefit may be more time available for high-end training closer to home.

Chief of Naval Operations Adm. John Richardson has been stumping for the idea of dynamic force employment, which ties in nicely with the National Defense Strategy’s call to “be strategically predictable, but operationally unpredictable.”

Navy deployments tend to be governed by a 36-month Optimized Fleet Response Plan cycle of maintenance, training, a regularly scheduled seven-month deployment and then about 15 months of being ready to surge forward if needed or maintain readiness at home. However, Richardson said this week he believes OFRP and dynamic force employment are complementary ideas rather than opposing ones, noting that OFRP creates ready forces and he’s simply looking to use that readiness in new ways.

“What we’re talking about is, once that readiness is generated, what do we do with that naval force? So I see it as being very complementary to the OFRP, injecting dynamic maneuver to naval forces at sea. I think these two are not in conflict at all,” he told reporters aboard USS George H.W. Bush (CVN-77) at sea on Monday.

“If you think about all the ways you could increase the power of the Navy, it’s not necessarily going forward, disaggregating the strike group and doing those sorts of operations,” he told USNI News later in the day on Monday.
“Maybe we increase naval power by bringing the strike group back a little early and we do high-end strike-group-on-strike-group exercises or training like that, and then you really kind of enter a, I’m trying out some things that are really on the cutting edge of naval warfare. And then the strike group pulls in and they get a little time with their families, time to go to schools, that sort of thing, and then maybe they surge forward – so you’re not gone for that long period of time, maybe you can do a little maintenance, and so we see there’s opportunities.”

The Navy has conducted several multi-strike-group operations in recent years, though not all have been able to operate at the high-end of warfighting. Three carrier strike groups met in the Sea of Japan in November, but USNI News reported they were not able to practice sophisticated maneuvers together due to being so close to Chinese forces.

“It’s an aspect of the security environment that it’s getting harder to do things without being observed, no matter where you are. So we’re going to have to be clever about that,” Richardson told USNI News.

If trained and certified carrier strike groups were to spend less time disaggregated overseas providing presence and working with allies and partners on lower-end operations, and instead devoted more time to training together to advance warfare tactics, Richardson argued, that would contribute to increasing naval power. 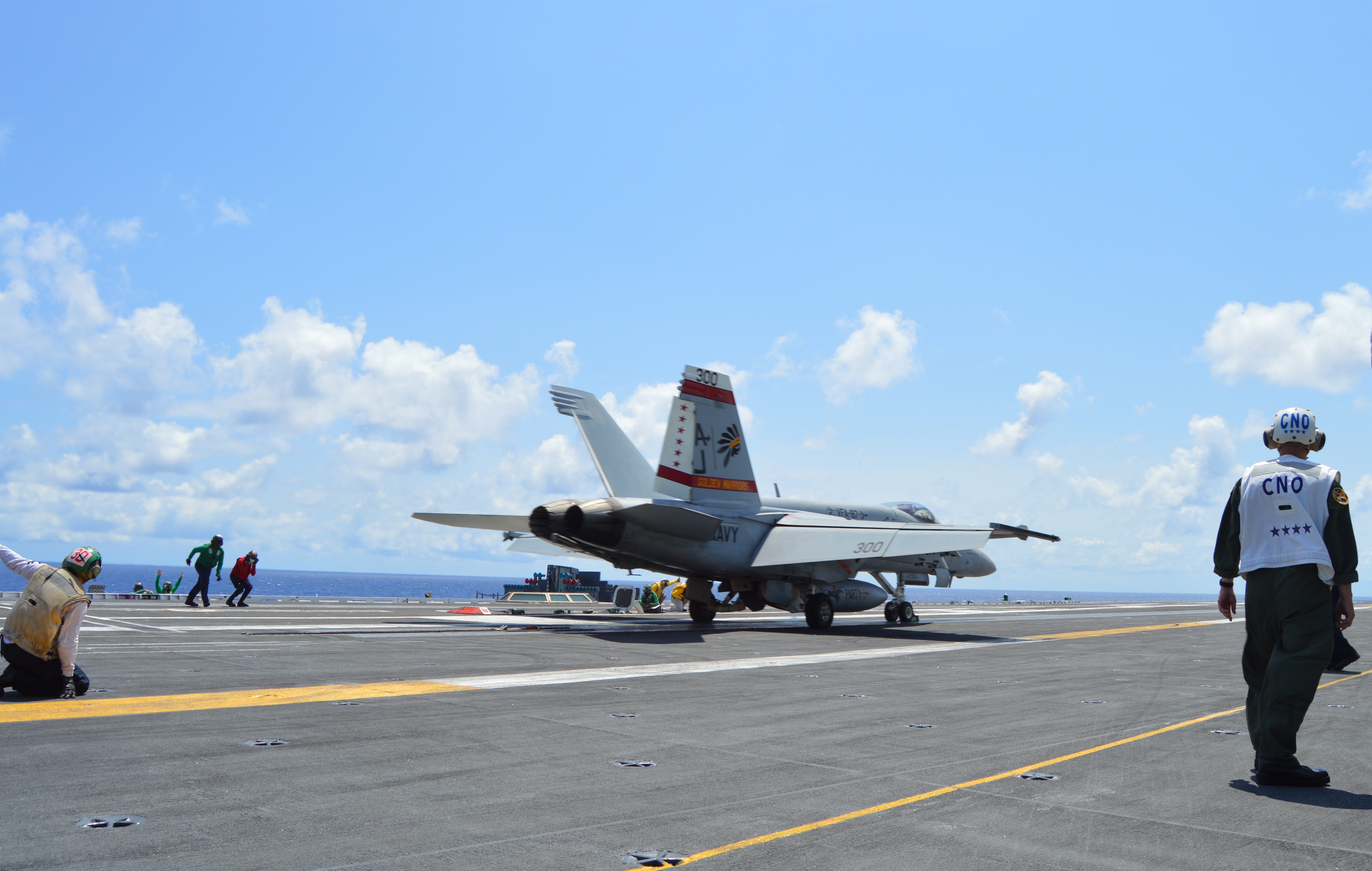 Asked about second and third order effects of the shift in how forces deploy – what it means for sailors’ families, what it means for ship maintenance and nuclear-powered aircraft carriers’ fuel consumption to potentially take more trips across the ocean but spend less time on station – Richardson said those considerations would be monitored as the Navy learns more about how the fleet can support new deployment patterns.

“The logistics and the fuel consumption and all that stuff will have to be measured as we do that so that we don’t overextend ourselves in that regard, but I think there’s a lot of good that will come out of it,” he said.

The CNO said his hope is not to upend how the Navy trains and prepares for deployment, but rather “to restore even more maneuver, restore that dynamism that has honestly become a little bit predictable. We kind of deploy in a very predictable schedule, we go to a predictable place and we come back in a predictable time. And so we’re going to try to stir that up a little bit so we’re not to easy to figure out.”

Richardson also said on Monday that the standup of U.S. 2nd Fleet – and the proposal to dual-hat the command with a new NATO Joint Force Command – would bring its own set of opportunities for operational innovation with allies.

“I would imagine that we’ll get a fair amount of allied liaison officers on the (2nd) Fleet staff as well,” he said when asked how 2nd Fleet would compare to the other numbered fleets around the globe.
“A lot of people have already approached me as seeing it as an opportunity so that as we – our 6th Fleet is the forward fleet in Naples, and they do a lot of working with our European partners with deployed assets – here we can potentially do a little bit more on the training and experimentation end of business with our allies. So it really I think opens up some opportunities.”

Richardson argued soon after taking over as chief of naval operations that the Navy was facing a return to great power competition that would force the service to operate differently. He has since discussed the role of a distributed maneuvering force to counter adversary threats, and more recently highlighted agility as one of six elements of naval power.

When the Pentagon released the National Defense Strategy in January, the same themes were present.

“Be strategically predictable, but operationally unpredictable,” the strategy dictates.
“Deterring or defeating long-term strategic competitors is a fundamentally different challenge than the regional adversaries that were the focus of previous strategies. Our strength and integrated actions with allies will demonstrate our commitment to deterring aggression, but our dynamic force employment, military posture, and operations must introduce unpredictability to adversary decision-makers. With our allies and partners, we will challenge competitors by maneuvering them into unfavorable positions, frustrating their efforts, precluding their options while expanding our own, and forcing them to confront conflict under adverse conditions.”

Defense Secretary James Mattis wrote in congressional testimony that “we are also changing our forces’ posture to prioritize readiness for warfighting in major combat, making us strategically predictable for our allies and operationally unpredictable for any adversary.” Chairman of the Joint Chiefs of Staff Gen. Joseph Dunford wrote in his own testimony that “in addition to investing in capabilities to increase the lethality of the force, the Department is developing concepts to maximize the effectiveness and agility of the force we have today. For example, the National Defense Strategy directs the Joint Force to ‘introduce unpredictability to adversary decision-makers’ through Dynamic Force Employment. Dynamic Force Employment allows us to develop a wide range of proactive, scalable options and quickly deploy forces for emerging requirements while maintaining readiness to respond to contingencies.”