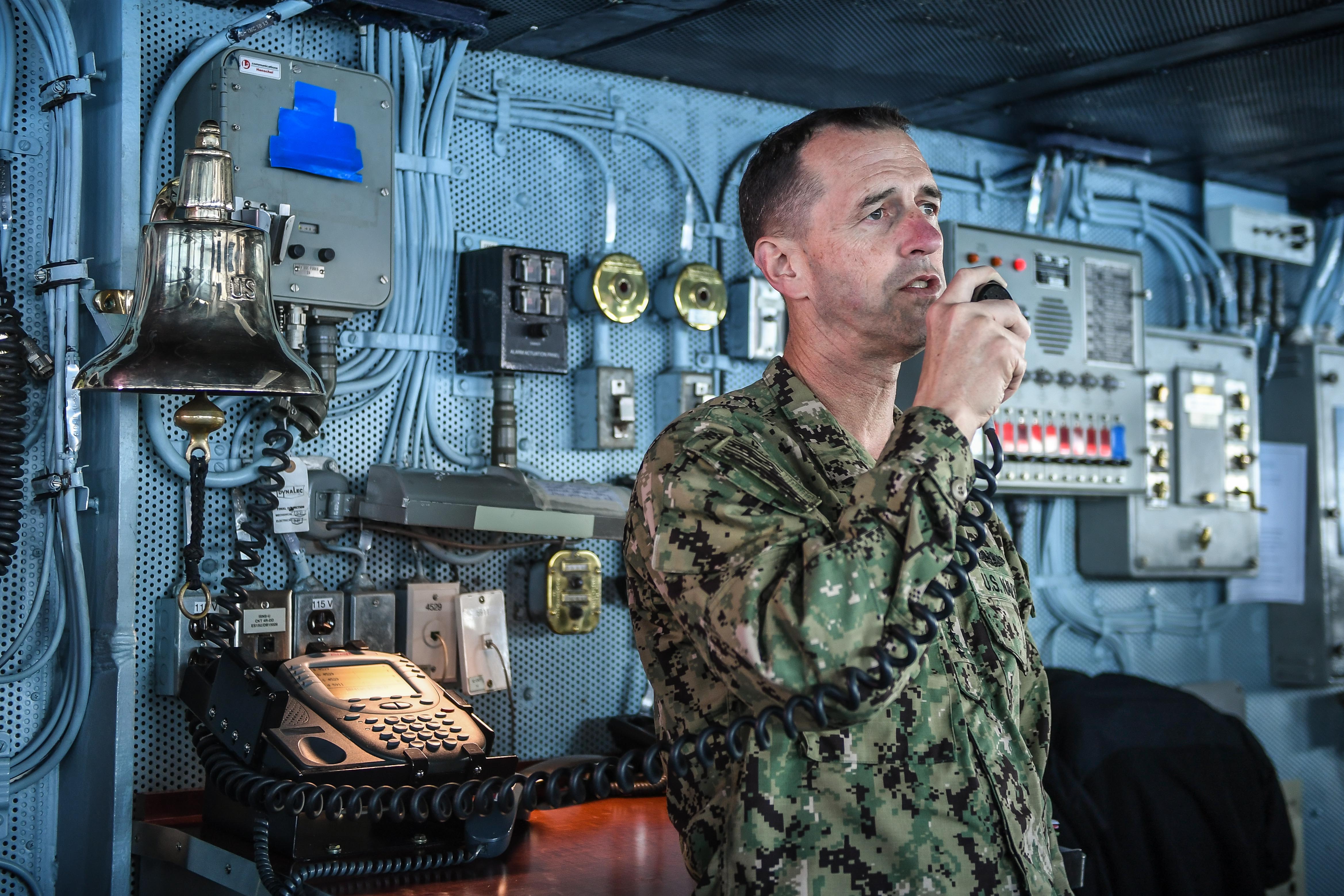 WASHINGTON, D.C. — Chief of Naval Operations Adm. John Richardson wants to expand how lawmakers, the public and the service think about the U.S. Navy by focusing on a six-pronged approach to achieving and maintaining U.S. naval power.

“Those are the components of the nucleus; if you try to tear one out, you don’t have naval power, you have some isotope of nuclear power, something that’s close but not really [naval power],” he said at a Heritage Foundation speech today.
“These isotopes are sometimes unstable, sometimes they decay, et cetera. It’s not the stable element we want, not the true thing.”

A recent focus on wholeness is meant to help the Navy “elevate our thinking above these false choices” sometimes forces upon the service – capacity versus capability, for example, for individual ship’s capabilities versus networking the ships together – and ensure the service is focused on all six dimensions of naval power.

Running through each dimension, Richardson said that first, “a bigger navy is a more powerful navy” and that multiple studies have pointed towards 355 ships as the correct number to aim for – a goal now included in law, after the House and Senate defense committees included it in the Fiscal Year 2018 National Defense Authorization Act.

Next is to “build a better navy. So if you modernize each one of those platforms in other ways, with better systems, make each one of those more capable,” then the same number of ships create more naval power. As the Navy modernizes its ships, Richardson said the service is “on the cusp of some very interesting things” that increase the naval power of each individual ship, such as directed energy, high-power microwave weapons, laser weapons, electromagnetic maneuver warfare, unmanned systems and other innovative ways to get on the right side of the cost curve for engagements with adversaries.

Third is to create a more networked fleet that can share data across the force and effectively leverage that increased awareness.

“There are plenty of examples in history where just the power of networking [platforms] together creatively, adaptively, brings actually more power to that force,” he said.

Fourth is developing a more talented workforce to man the larger, better and networked fleet. The skillsets those sailors will need are different than the skills needed to succeed in recent years, Richardson said, with a major difference being the vast amount of data available to sailors thanks to a great increase in the number of sensors the Navy fields. Those sailors will have to use their own best judgment, with assistance from artificial intelligence and learning algorithms, so pick out decision-relevant information from the sea of data at their fingertips and make quicker and smarter decisions than their adversaries.

Fifth is agility; “once we have built this fleet, we’ve modernized it, we’ve networked it, we’ve manned it with the appropriately trained sailors with the assistance we need … how are we going to operate it?” Richardson said that as technology improves, the Navy needs to remain agile in how it looks at its concepts of operations, constantly developing technology to support its [concpet of operations] but also adapting its CONOPS based on available technology. He said agility would also support the distributed maritime operations concept, which relies on the Navy’s ability to maneuver globally. The Navy may be bound by certain limitations, such as physical chokepoints like straits in heavily-trafficked waterways, but it must make sure the fleet is not constrained by artificial constraints such as the boundaries between geographic combatant commanders.

Lastly, Richardson said the first five ideas create the potential for naval power, but there is only actual naval power if the Navy is ready.

Richardson made clear the Navy is doing what it can to achieve all six elements of naval power in the appropriate balance – including adding wholeness reviews to the budget process – but budget instability, government shutdowns, continuing resolutions and more coming from Congress create major challenges in maintaining a fully balanced “nucleus” of naval power.

Conducting deep maintenance on ships to create readiness, for example, takes more budget stability than Congress currently provides, he said – the Navy needs time to get material ordered, personnel at the yards in place, plans engineered and more, and “when you have these sorts of fits and starts, this uncertainty, you can’t write a contract.”

He said maintenance activity in recent years has tended to bow-wave into future years, as the Navy is unable to get contracts in place and availabilities started in a timely manner.

In some ways, the Navy has adapted to the new budget environment. Naval Sea Systems Command, which oversees ship maintenance and modernization activities, has begun contracting “modernization availabilities” that can use multiyear dollars in the budget, instead of traditional “maintenance availabilities” that rely on single-year dollars that are more likely to be unable to be executed in time if continuing resolutions drag on too long and the Navy gets a spending plan too late in the fiscal year. Contracting modernization availabilities with options of maintenance work has helped keep this type of work on track, USNI News has previously reported.

Richardson said the Navy has found other ways to adapt – the Navy doesn’t plan to conduct major work or reach major acquisition milestones in the first quarter of the fiscal year, with the expectation that a budget won’t be in place yet, for example. Noting the upcoming Super Bowl, Richardson said, “in a competition that’s that close, you can’t expect a team to win if they only play three quarters out of four. And that’s kind of what our fiscal environment does.”

“We do need stable funding,” he made clear.

Richardson added that the new wholeness reviews the Navy began conducting this past year to inform the FY 2020 budget request, are aimed at maintaining a balanced “nucleus” of naval power.

“The way that we bring the program together starts with our strategic direction, and we’ve got a very integrated approach that includes keeping that nucleus in tact all the way through the process,” he said.
“And then at the end we check our homework: so if we started with a particular vision in mind, it goes through all the machinations, we want to make sure that the thing at the end of the process looks like what we started with. So that process of getting all of our leadership connected very closely with the fleet helps us” navigate whatever budget the Navy ends up with and on whatever timeline, and ensure that the money the Navy spends is strategically aimed at maintaining all six prongs of naval power.