The Navy is focusing on total ownership costs and program wholeness in its future budget submissions, ensuring that resource sponsors and program managers have considered costs like training and sustainment from the beginning.

Rear Adm. Jim Kilby, director of warfare integration on the chief of naval operations’ staff (OPNAV N9I), told USNI News that starting with the Program Objective Memorandum for the 2020 budget the Navy had implemented a “wholeness balance review” process.

“It’s part of the POM process. The entering argument now is, let’s talk about your program from a wholeness perspective before we just put it in the mosh pit with everything else,” Kilby told USNI News after participating in a panel discussion at last week’s Surface Navy Association annual symposium.
“So that part of POM [2020] has happened, we’ve taken program wholeness balance reviews from everybody. Then there’ll be a readiness piece about additional readiness investments we may need to make, and then an investment piece is what I’m in charge of to go look at capability. And then there will be an integration phase at the end where we weigh all those values out and use evaluation criteria vice just ‘hey I think’ or ‘my gut tells me’ to try to come up with the best program.” 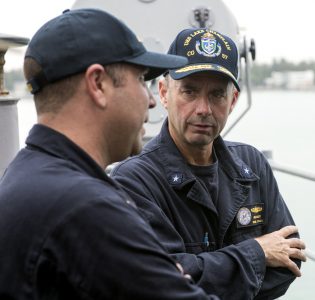 Beginning in December, one- and two-star officers have participated in the wholeness balance reviews and can move money around to address holes in the program – for training, for maintenance, for interoperability with other programs – within a certain dollar amount. Wholeness gaps greater than that dollar amount are forwarded on to the Navy’s corporate board to decide how to proceed.

Program “wholeness” became something of a buzzword in the Pentagon after Defense Secretary James Mattis released a memo in January 2017 that stated a Fiscal Year 2017 supplemental budget would focus on “warfighting readiness” and then the FY 2018 budget request would “achieve program balance.” “Building capacity” would then take place in FY 2019 and beyond, according to the memo.

Of course wholeness cannot be addressed in a single budget cycle, and Kilby said the Navy would continue with these wholeness balance reviews going forward to provide “the right introspection and honest visibility” to how much money it actually takes to make a program whole and able to succeed in the future.