This post has been updated to correct the hull number of the former USS St. Louis. It’s LKA-116, not LKA-117.

The high-end biennial Valiant Shield exercise kicked off in Guam and the Northern Mariana Islands on Sunday, with some of the Navy’s and Marine Corps’ most advanced platforms participating in the weeklong event.

The exercise – a high-end, U.S.-only follow-up to the large-scale multi-national Rim of the Pacific exercise every other year – features more than a dozen ships, 160 aircraft and 15,000 personnel from all four military branches. This is the seventh iteration of the exercise, which began in 2006.

“We are excited to be here for exercise Valiant Shield as Guam gives us a world-class joint-training opportunity,” exercise director Rear Adm. Daniel Dwyer said in a news release.
“The Marianas Island Range Complex is a premier training environment that allows the joint force a unique opportunity to come together and train side-by-side at the high end.”

To support that high-end warfighting training, the exercise will feature the Marines’ new F-35B Joint Strike Fighter for the first time ever; two P-8A Poseidon maritime multi-mission aircraft squadrons; and guided-missile destroyer USS Milius (DDG-69), the most recent ship to go through a combat system upgrade and be rotated into the forward-deployed naval forces in U.S. 7th Fleet. 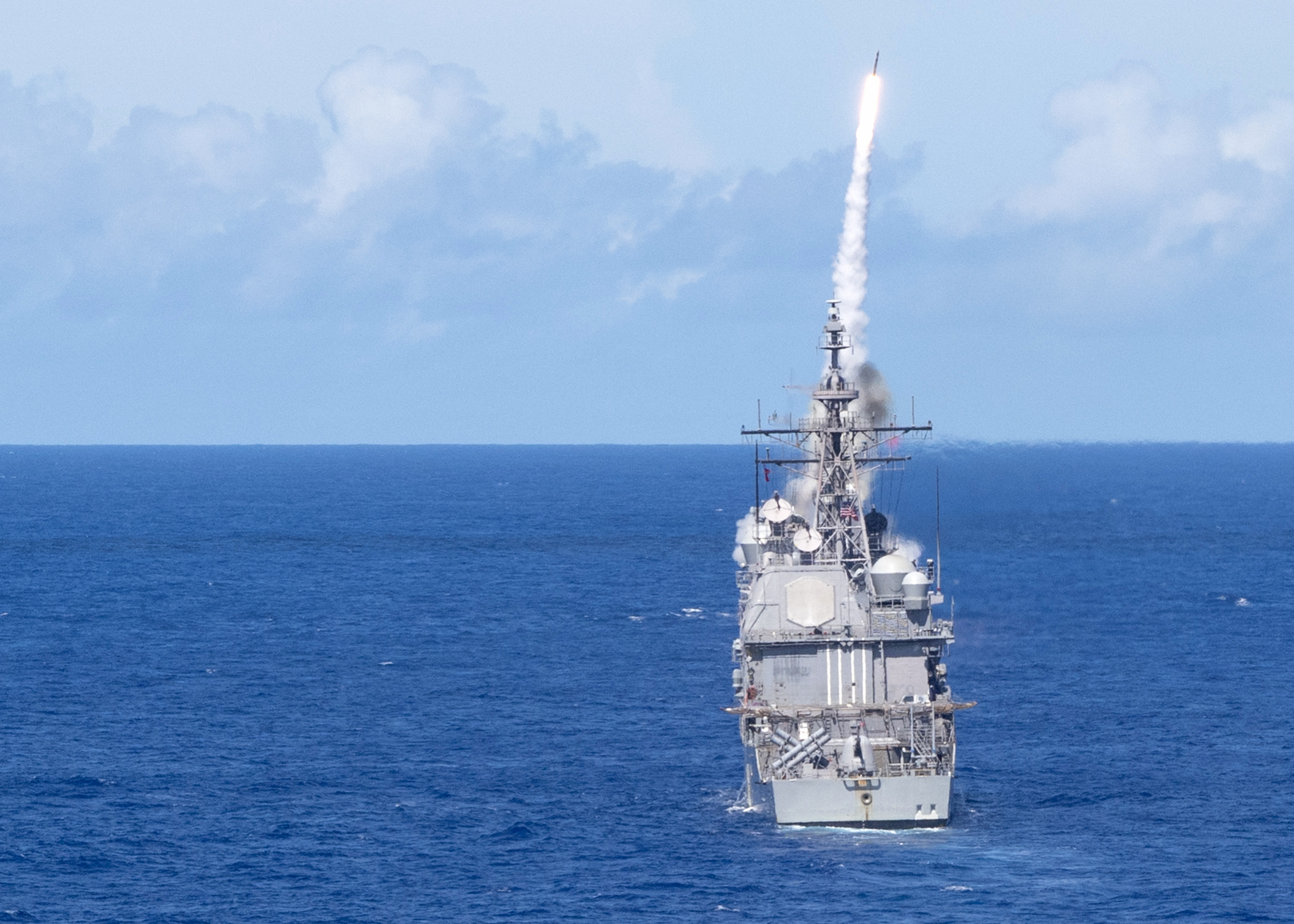 The Arleigh Burke-class guided-missile destroyer USS Milius (DDG 69) launches a standard missile 2 while in formation with the USS Chancellorsville and USS Ronald Reagan during a live-fire exercise for Valiant Shield 2018 on Sept. 16. US Navy photo.

Valiant Shield will also include a sinking exercise (SINKEX), in which ships and aircraft will shoot at and sink decommissioned USS St. Louis (LKA-116). PACFLT did not comment on the specifics of the SINKEX, but two SINKEXs at RIMPAC in July included multiple Harpoon missile shots, as well as the U.S. Army firing a Naval Strike Missile from a Palletized Load System ashore.

So far, according to captions from photos of the exercise, USS Shoup (DDG-86) has launched Tomahawk cruise missiles, and Milius and guided-missile cruiser USS Chancellorsville (CG-62) launched Standard Missile-2s.

Not included in the exercise are any amphibious ships. Amphibious assault ship USS Wasp (LHD-1) had been hosting the F-35Bs from Marine Fighter Attack Squadrons (VMFA) 121 but is currently supporting disaster relief efforts following Typhoon Mangkhut, along with dock landing ship USS Ashland (LSD-48) and Marines from the 31st Marine Expeditionary Unit. 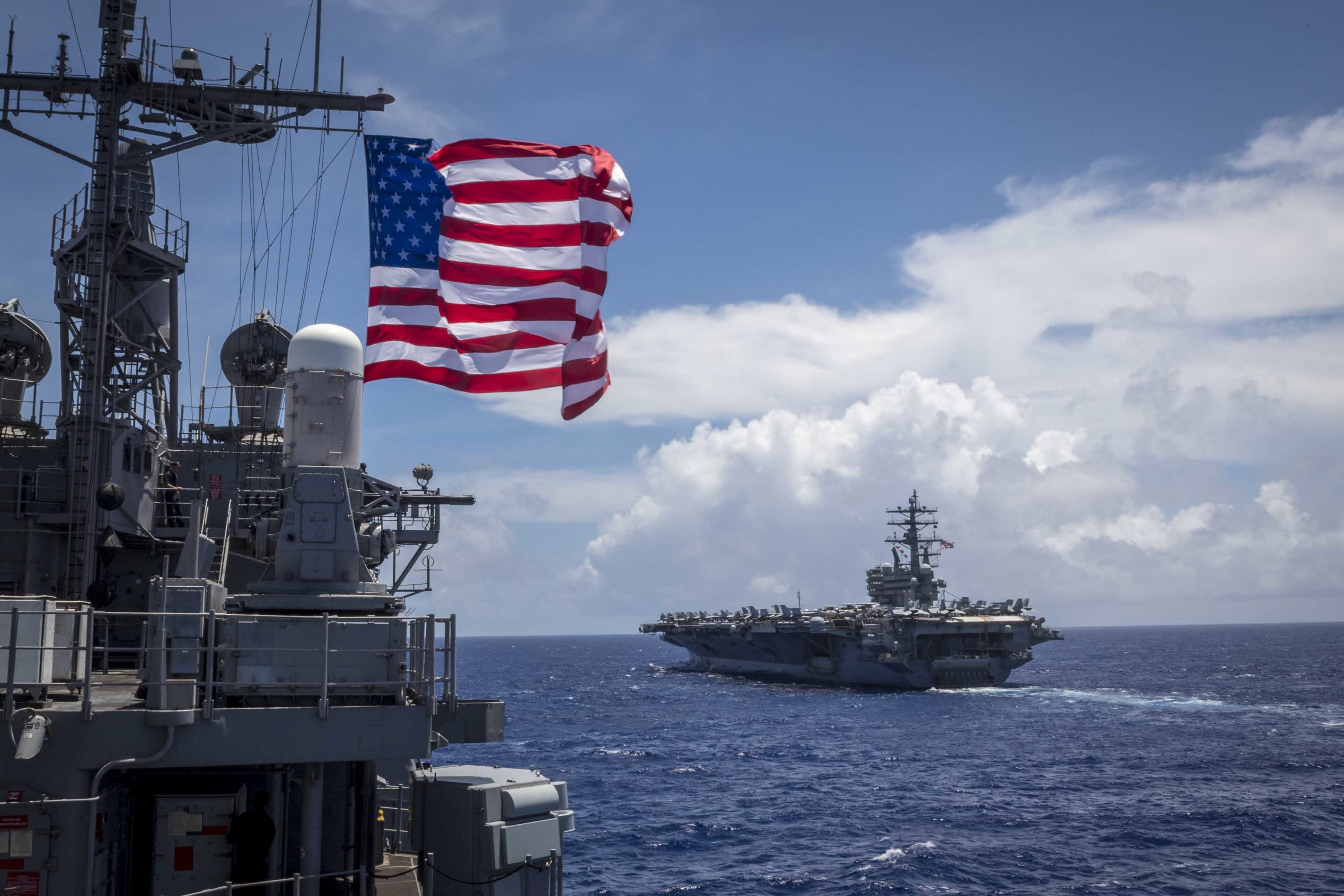 The Ticonderoga-class guided-missile cruiser USS Chancellorsville (CG 62) sails behind the aircraft carrier USS Ronald Reagan (CVN 76) while in formation for a photo exercise during Valiant Shield 2018 on Sept. 17. US Navy photo.