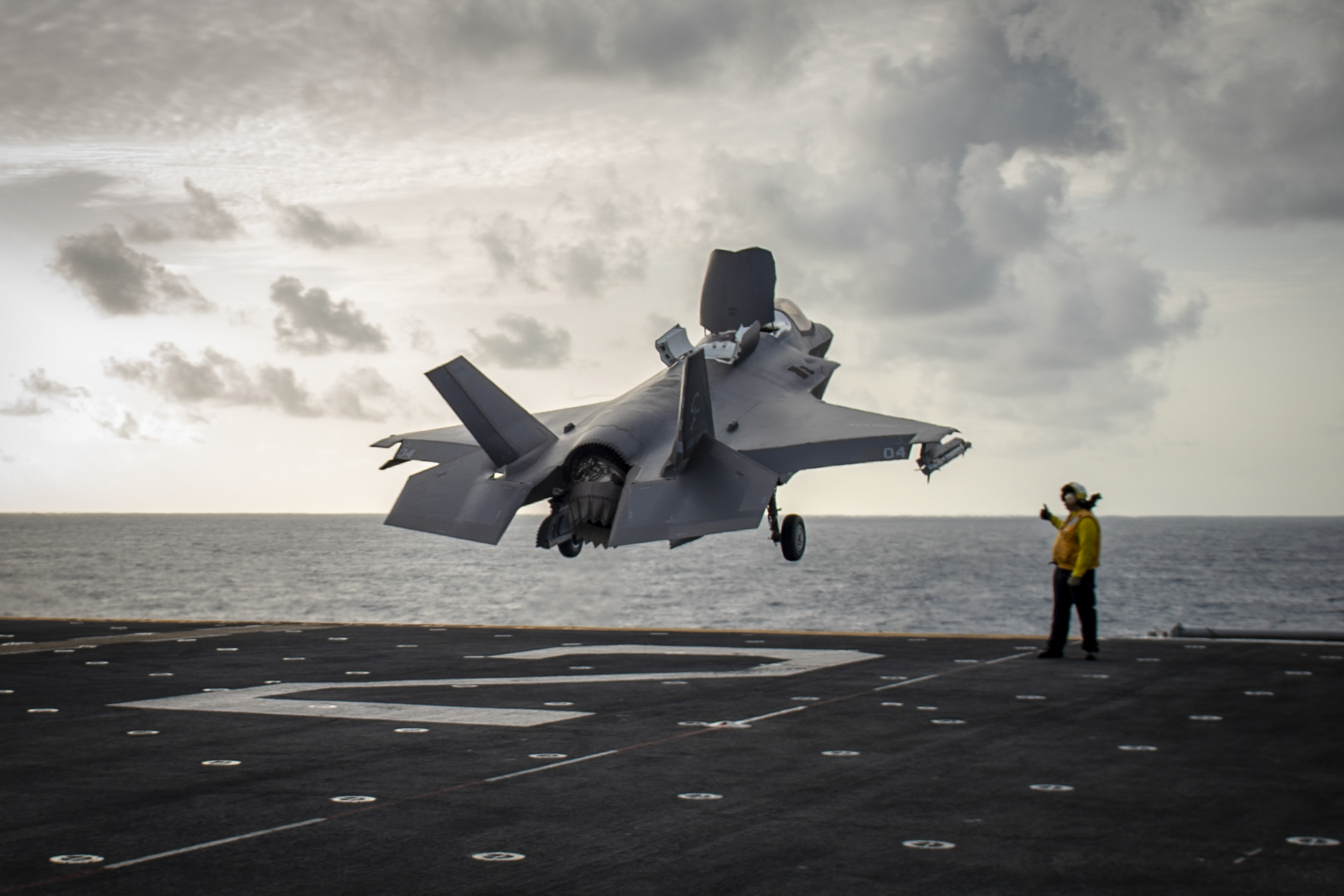 Marines training on the ground on the Horn of Africa will see a new set of wings pulling the classic close air support mission: The F-35B Lightning II Joint Strike Fighter.

“We will exercise all of the capability of the aircraft without prioritizing a specific one. It will all pertain to supporting the Marine on the ground,” Col. Chandler Nelms, who commands the Camp Pendleton, Calif.-based 13th MEU, told USNI News by phone from Essex on Saturday as the ship was operating off Djibouti. “We have the opportunity to run through the full gamut of our capabilities while we are here.”

For two weeks, the F-35B and the rest of the 13th MEU’s combat firepower will train at military ranges in Djibouti and in the international waters off the coast. About 4,500 Marines and sailors with the 13th MEU and Essex ARG – Essex, amphibious transport dock USS Anchorage (LPD-23) and dock landing ship USS Rushmore (LSD-47) – are participating in the TACR exercise, which kicked off Saturday, for Naval Amphibious Force, Task Force 51/5th Marine Expeditionary Brigade. 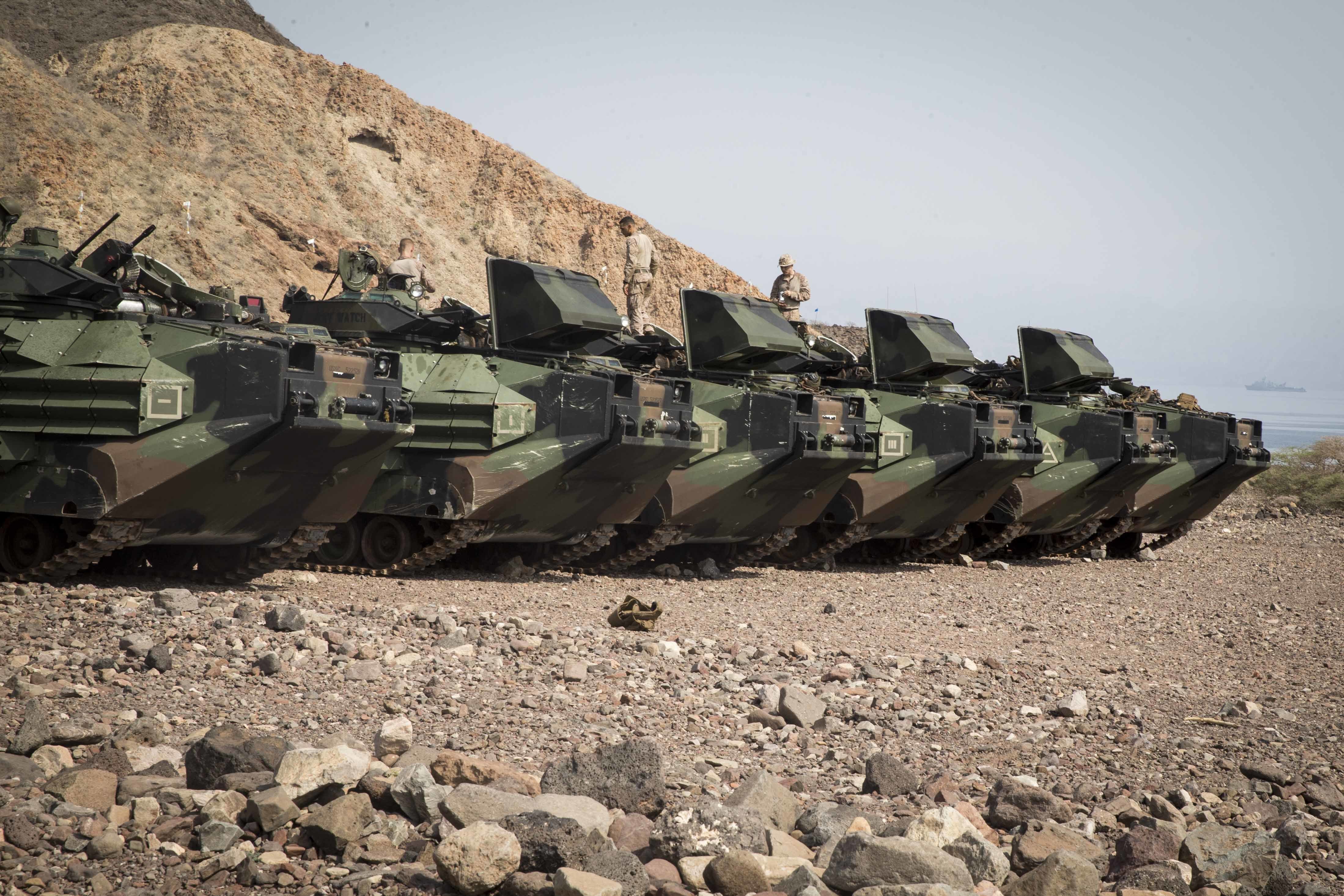 “This is about continuous readiness. We put a lot of effort into training on the West Coast before we deployed. We trained to a pretty high level of readiness when we left. Those skills kind of atrophy very quickly if you don’t practice,” Capt. Gerald Olin, Amphibious Squadron 1 commander and Essex ARG/MEU commodore, told USNI News.

The F-35B, equipped with arrays of high-tech radars, sensors and computers, is designed for designed for short takeoffs and vertical landings and will replace the Marine Corps’ fleet of aging the AV-8B Harrier attack aircraft. The addition of the F-35 to the ARG, Olin said, “is a very significant enabler for me and for my team. It increases battlespace awareness with data fusion and the ability to share information with the ships and the ships’ combat control system. So it’s really an extension of our sensors, and it also brings to the table a greater increased lethality than what we had with previous generation aircraft.

“It’s really a game-changer for us, and we are really excited to be a part of bringing this new tool to the ARG and learning how to use it. I don’t think we really know exactly… we’re kind of at the leading edge of discovering that,” Olin said.

Nelms said the F-35B would expand their combat capabilities as an integrated, blue-green team. “That’s what makes us a powerful crisis-response force while we’re out here,” he said. “I think our commanders know that they will leverage any weapons system that we get a hold of, and the F-35 is no different. We’re just looking forward to demonstrate what we can do and being available as the crisis-response force.”

Within a week of leaving San Diego Naval Base for the scheduled deployment to the Pacific and Middle East, the Essex ARG/13th MEU stopped in Hawaii for a few days of sustainment training. Then it was on to the Western Pacific, where elements of the MEU joined in theater security cooperation (TSC) exercises with Indonesia, Malaysia and Sri Lanka military forces. “It was a great opportunity to demonstrate our capabilities and to partner up with our allies in the region,” Nelms said. 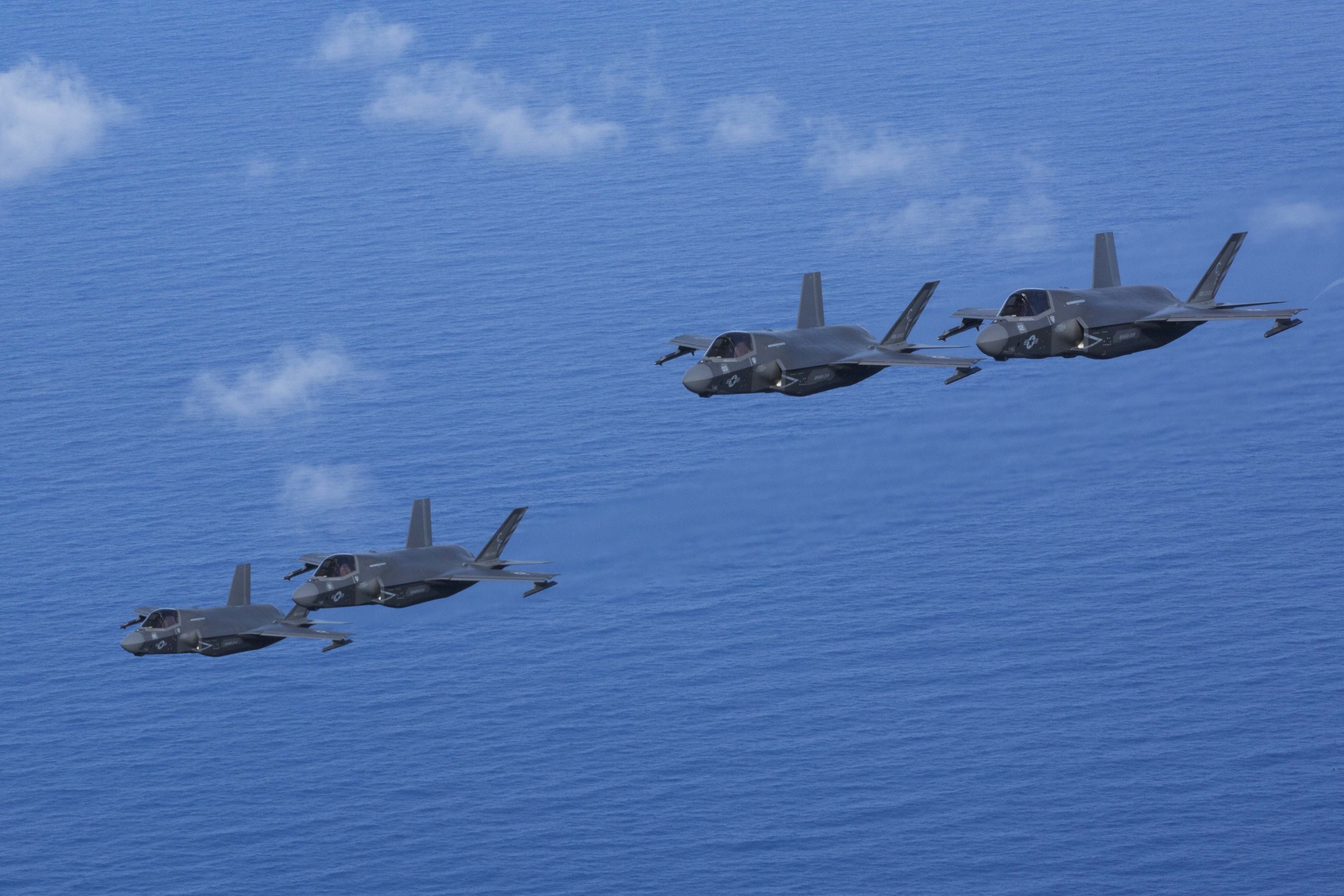 “Now that we are in 5th Fleet, our primary mission is crisis response… being current and absolutely ready for anything the geographic combatant commander needs us to do while we are here,” he said. That means running through our rehearsals for TRAP (tactical recovery of aircraft or personnel), quick reaction force (QRF) employment and CASEVAC (casualty evacuation), “and we are basically training for across the range of military operations.”

“We’re the on-call for anything, from small-scale simply sending in a quick-reaction force to major combat operations where we’d commit the entire capability of the MAGTF, the MEU,” he added. Most of the force, including Battalion Landing Team 3rdBattalion, 1st Marines, offloaded from the three ships to Djibouti’s ranges. The MEU will test all its warfighting functions, including command-and-control, maneuver and fires, and stretch its expeditionary capability with putting logistics, sustainment and medical capabilities ashore. Djibouti, in the Horn of Africa along the Gulf of Aden, is home to the growing military base at Camp Lemonnier and an austere, desert range complex.

“It is a challenging environment, one of the toughest places to train,”Nelms said. “It very much simulates other locations in 5thFleet, where we may need to operate in.”

The exercise and presence, he noted, “is a demonstration of our commitment the region, that as we come into theater we immediately start to maintain our readiness, demonstrating to our partners that we are a reliable and very capable force that’s ready to play a role as the commander needs.” 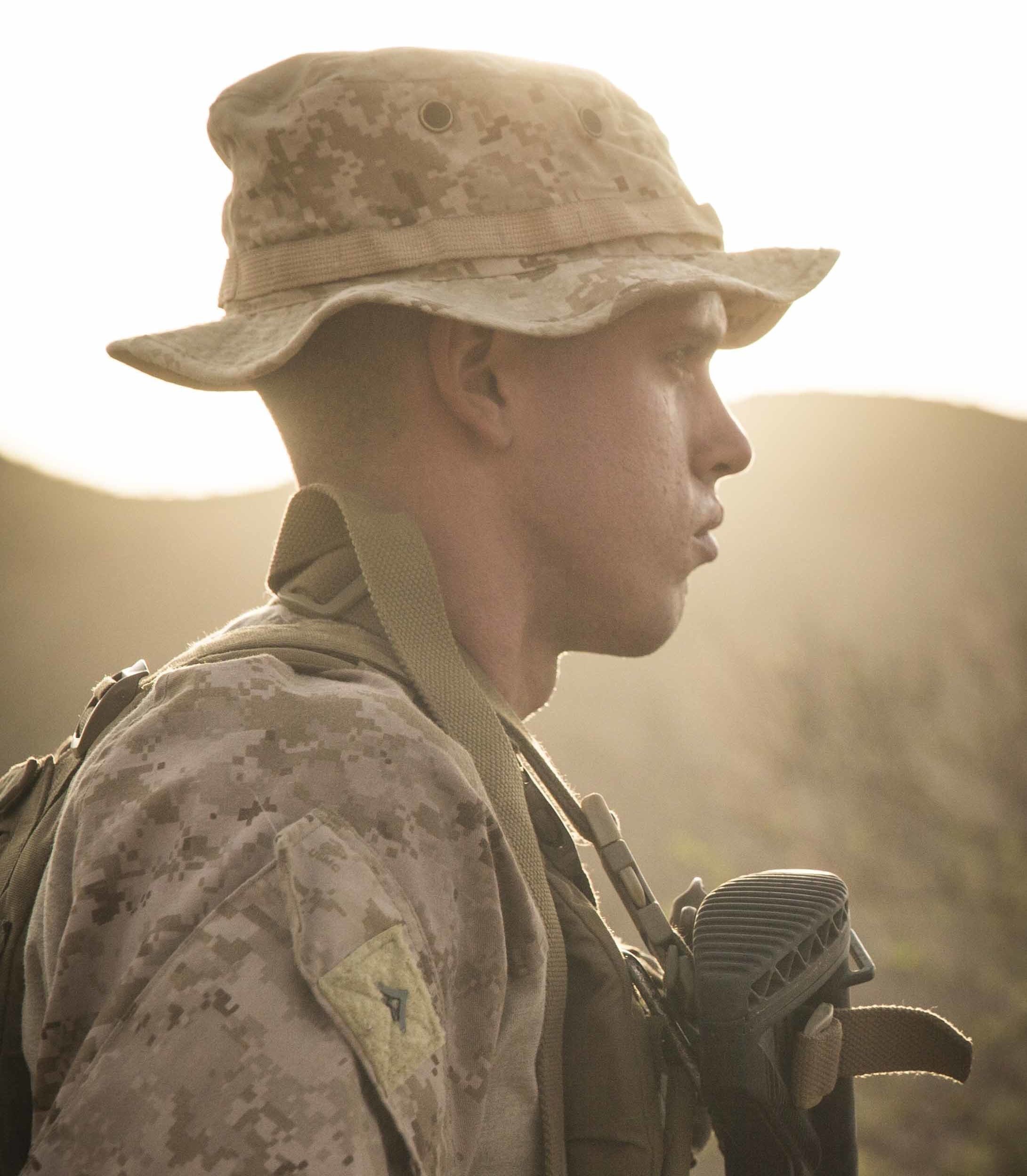 For Essex ARG, TACR training will help “our proficiency at conducting amphibious operations from the sea,” Olin said. “It’s a great chance for us to run all of our ship-to-shore connectors. We have to move a large amount of material off all three ships. We have to move a lot of people. It’s a pretty complex task to do that… swiftly and to do it safely. That’s what we are trying to maintain that right now.” Those connectors – air-cushioned landing crafts (LCAC) and utility landing craft (LCU) along with support flight operations, “is about a two or three day process,” he said. “Then we will repeat that on the back end of this event.”

The Essex ARG will participate in the Theater Countermine and Maritime Security Exercise, which is playing out in the waters that include Bab el Mandeb, a strait that connects the busy waterways of the Gulf of Aden and the Red Sea. “We are practicing our ability to maintain freedom of navigation through key chokepoints throughout the region,” said Olin. “We practice our ability to conduct command and control for counter-mine forces, to protect those forces at sea and then to provide the command and control.”

While supporting the mine warfare component commander during MCMEX 18-3, Essex will serve as a prime command and control node for mine-hunting forces, he said, “so we have the command and control and the teamwork built for the many different organizations that roll into that.” Other maritime training will involve ARG/MEU teams practicing ship-boarding, or visit-board-search-seizure, missions.

During the TACR training, Nelms said, assault support forces from Marine Medium Tiltrotor Squadron 166 (Reinforced)’s complement of CH-53E Super Stallion heavy-lift helicopters, MV-22 Osprey tilt-rotor aircraft, UH-1 Huey utility helicopters and AH-1 Cobra attack helicopters, “will get a great rep in the environment here and practice landing in austere environment. We’ll be incorporating the F-35Bs into the play of the problem throughout the exercise, primarily focused on supporting the Marines on the ground.”

Commanders said the F-35B is a key part of providing the amphibious force with advanced intelligence, surveillance and reconnaissance capabilities that it can use most anywhere it’s needed. “What makes our ARG/MEU team such a unique capability in the theater is its mobility, its access from the sea,” Nelms said. “It makes them a flexible choice for the commander. And that would be the same for the aircraft that are embarked. While the F-35B is an incredibly capable aircraft, the ability to put it on amphibious shipping and have the option to place it anywhere you want in the 5th Fleet region buys the commander an incredible amount of flexibility.”

Lt. Col. Kyle Shoop, who commands VMFA 211, a Yuma, Ariz.-based squadron, said the squadron was racking up more time deployed at sea than any other squadron and is “continually working with the ship to define best practices during this first deployment.”

“It’s been a good while since we had done any close-air support… getting our skills refined again, get everybody to shoot the guns, dropping the bombs and supporting the Marines on the ground,” Shoop said.

After leaving San Diego on Essex for Hawaii, the F-35B squadron flew some blue-water operations, including handling scenarios safely if there’s no divert field. In Hawaii, a detachment trained and flew with the F-22 Raptor, the Air Force’s newest, fifth-generation fighter.

Continuing westward, he said, the squadron got clearances to use its AIM-9 Sidewinder missile for basic firing maneuvering training, conducted close are support missions in Malaysia and conducted forward refueling operations at smaller islands in the western Pacific along with the CH-53E and MV-22. “So we stayed pretty busy doing some new stuff and breaking some ground,” he said.

Earlier this year during a briefing during the WEST 2018 conference in San Diego, Shoop said he was concerned about whether the squadron would get spare parts and other logistics support it needs for the new jet once they left San Diego. “So far, it’s worked out great. Lockheed has been fully committed,” he told USNI News. “We’ve got some support onboard, via (Marine Aviation Logistics Squadron 13),” and Marines from Combat Logistics Battalion 13 are supporting them at each logistics location ashore. “No major hiccups thus far,” he said.