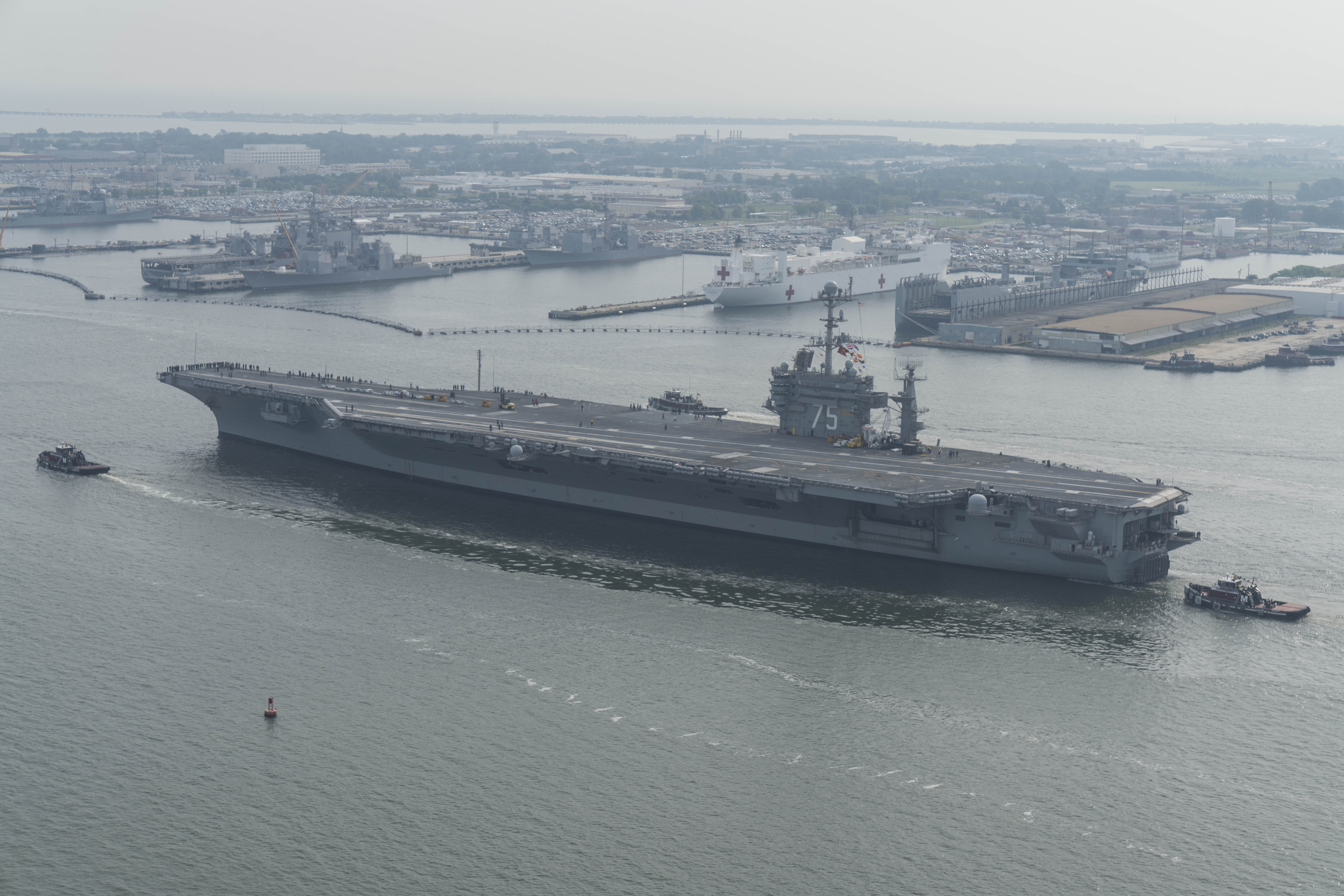 This article is the first in a two-part package on the East Coast aircraft carrier fleet, after Commander of Naval Air Force Atlantic Rear Adm. Bruce Lindsey invited USNI News to talk about recent milestones within his fleet.

Despite previous struggles on the East Coast to get the aircraft carriers settled back into a healthy routine, Commander of Naval Air Force Atlantic Rear Adm. Bruce Lindsey said his fleet is now successfully executing the 36-month Optimized Fleet Response Plan schedule, thanks to a couple key lessons learned.

Lindsey, speaking to USNI News in a July 26 interview in his office, walked through four major lessons learned on Truman’s availability that he intends to implement and expand on during Ike’s upcoming availability and USS George H.W. Bush (CVN-77) down the road.

Lindsey said Truman met all its planning milestones, even while on a deployment that was extended by one month. When the carrier returned home, it entered Norfolk Naval Shipyard on time and was therefore able to complete the work on time.

Second, he said Norfolk Naval Shipyard – the sole location for East Coast carrier maintenance availabilities – committed to keeping up with its hiring plan, as the four public shipyards look to boost their collective workforce to 36,100. In Fiscal Year 2015, Lindsey said, the yard started at 9,400 workers, lost 749 and hired 1,452. In FY 2016, the yard lost 742 workers but hired 1,180. This year attrition is down and hiring slowed to just 449 new employees, but he said the yard is executing its workforce plan.

Third, Lindsey said he credited Capt. Scott Brown, commanding officer of Norfolk Naval Shipyard, for both pushing his yard to be more productive but also understanding what level of productivity is feasible and refusing to sign onto a work package that his yard can’t successfully complete.

Historically, Lindsey said, a carrier strike group commander might say the carrier needs a certain-sized work package and that the work must be done in six months. The yard might come back and say that amount of work would take eight months, but if the CSG commander insisted on six, the yard would attempt to meet the unrealistic deadline and often times fail.

“There’s almost a 100-percent correlation to high risk and failure to come out on time,” Lindsey said.

With Truman, he said, the Planned Incremental Availability had been set for eight months. But with all the work the ship needed, plus the installation of the Consolidated Afloat Networks and Enterprise Services (CANES), Norfolk Naval Shipyard insisted the work package would take 10 months to complete. Rather than take on unnecessary risk, Brown, along with Lindsey, the ship commander, the carrier strike group commander, Naval Sea Systems Command, Naval Reactors and other involved parties, went to Commander of U.S. Fleet Forces Command Adm. Phil Davidson and advocated a 10-month schedule.

“He decided yes, I will give you two months, but that ship will come out on time,” Lindsey said of that meeting with Davidson.
“And – I don’t think he was joking – he said, if not, you’re fired. And so we all saluted and went back, and that team formed around that mission to come out on time.” 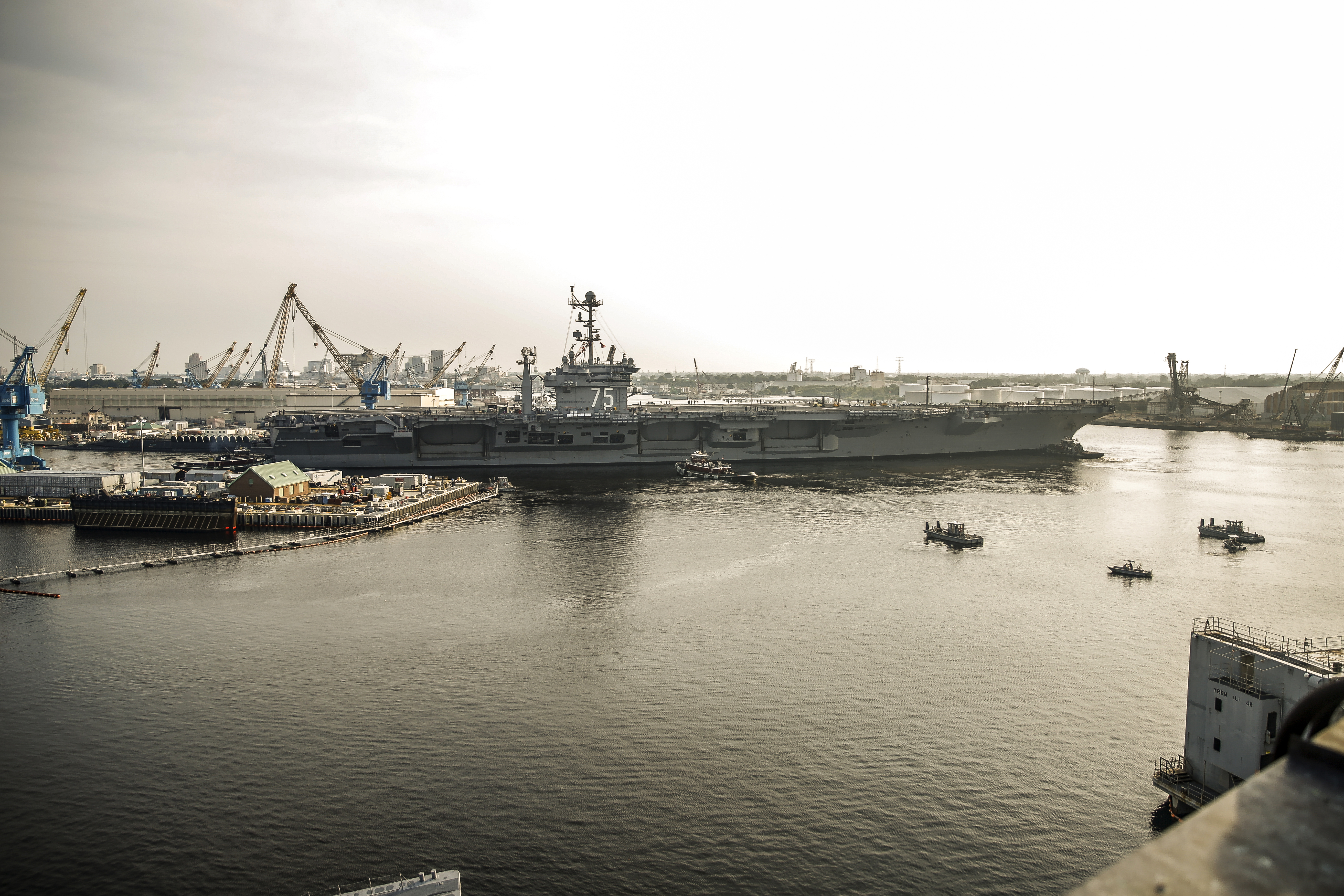 For example, he said, the pump shop had a lot of problems during Eisenhower’s last docking availability – which was supposed to last 14 months but encountered many problems and turned into a 24-month work period – or Bush’s availability before that. The pump shop reorganized its personnel organization and the layout of the shop itself to create some efficiencies. But it also gained several new technologies. Lindsey explained that every pump needs gaskets; the gaskets are cut in a shop, the pump is assembled, the pump is then moved down to the pier in what can be a full-day maneuver, and the pump is put on a mount and then eventually tested. After all that effort, if the gasket wasn’t 100-percent right when it was cut, the whole pump will start leaking water. So, the pump shop now has a laser cutter that will make a precise gasket in about 35 seconds.

Additionally, when the pumps are installed, they have to be shimmed so they sit correctly. The pump shop invested in a laser tool to take precise measurements so the pump can be shimmed properly.

The pipe shop also got an upgrade, Lindsey said, describing a technology that will find and measure all the bends in the piping on a ship. Via wireless internet, the system sends that information to the pipe shop so that new pipes can be bent correctly, making sure they fit correctly the first time and making the welders’ jobs easier and less time-consuming.

“He’s invested in technology, he’s invested in personnel, he’s invested in the planning processes, and then he invested in the part about matching the productivity of his workforce to the work packages,” Lindsey said of Brown, adding that there is still room for improvement and that the yard, the strike group, AIRLANT and others involved would continue looking for ways to make the maintenance phase of OFRP even more efficient than it proved to be with Truman.

“By coming out on time, coming out as strong as they did, we played the risk game and we won, and they will have a full training cycle just as we planned it, which is very good so they will get the reps and sets that the ship and the air wing need to be very very proficient for the high-end fight,” Lindsey said.
“We did it once; we’ve got to show we can do it again. Adm. Davidson is very high on trends. One thing is a data point, two is a line, three, okay, you have a trend. So we’re going to make that the second one, and then we’ll probably bring in I think it’s Bush next for the next one here.”

To aid in continuing this trend, Lindsey said he promoted Truman’s commanding officer, Capt. Ryan Scholl, to the Naval Air Force Atlantic chief of staff as a means of retaining institutional knowledge and building on Truman’s success.

“Oh by the way, he’s so good I’m going to bring him over to be my chief of staff here, and therefore he will ride herd on Eisenhower Strike Group and help them do that,” Lindsey said.
“He led it, he knows best, he can be that forceful backup to the current [Eisenhower] captain, Capt. (Paul) Spedero, and enable him to come out on time. Different challenges, there’s different work packages, it’s not the same … I would say Eisenhower has harder work packages to do, which makes it a better challenge.” 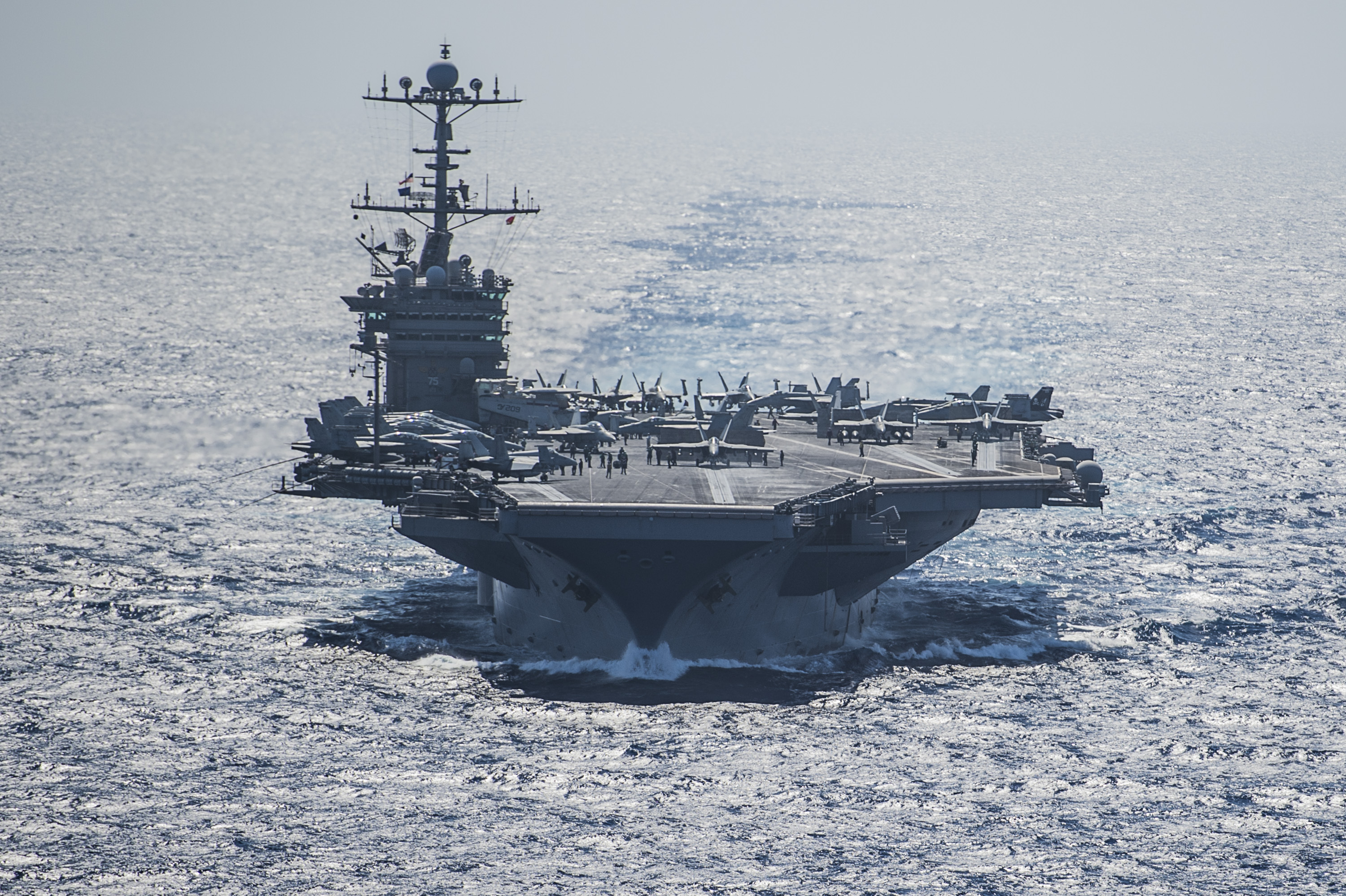 Despite all the positive lessons learned with Truman, Lindsey said he wasn’t confident it would come out of the yard on time until the very end. Truman had to deploy on short notice in 2015 due to Ike’s maintenance challenge, and the carrier’s regularly scheduled six-month planned incremental availability was shortened to a three-month quick job to get Truman ready to go on a combat deployment. That deployment involved record-setting workloads and was ultimately extended by a month to continue anti-ISIS airstrikes until a replacement could arrive. The deferred maintenance and heavy operational tempo could have combined to create major problems once workers started opening up the ship – and there were some bad surprises along the way – but Lindsey credited the whole ship-shipyard team with being agile and finding solutions to stay on schedule.

One work item was to apply a new coating to the ship’s piping, which is an intrusive process that involves pulling out the piping.

“When they started pulling it off, it was lucky for us but it sounded bad at the time, we found bad piping. So now we’re projecting, oh my goodness, all this piping is going to need this, and that blows the budget, if you will, in time,” Lindsey said.
“And there was a time there that we did not want to do – the easy thing is, lets’ not do that. But it’s a safety issue, and Naval Reactors stood firm, and so therefore we said, no, we’re going to do it all. So that caused us to reexamine the plan.”

Lindsey said Newport News Shipbuilding assisted in the effort, since the deferred maintenance from the last deployment cycle led to a bigger work package this year than Norfolk Naval Shipyard could handle on its own.

“There were so many man-days of this project because of those back-to-back deployments,” Lindsey said, praising both yards for “making sure that we have the public-private teamwork going on, because there’s enough work for everybody right now.”

Lindsey said the ability to stay agile kept Truman’s availability on track, despite the challenges presented. 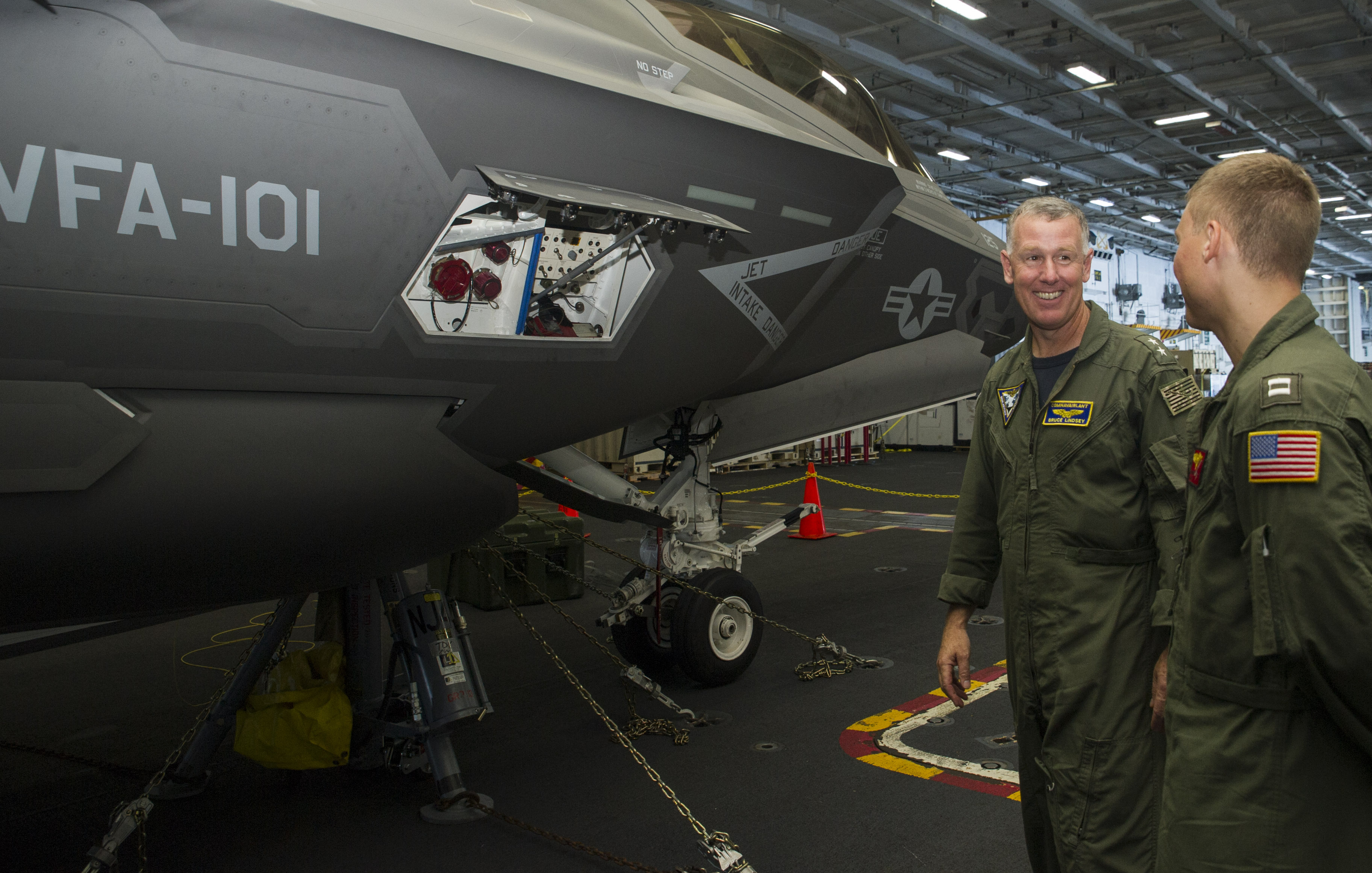 Overall, Lindsey said he is celebrating many major milestones with his East Coast carrier fleet and is pleased to see OFRP working as planned. Truman completed its 10-month Planned Incremental Availability at Norfolk Naval Shipyard and subsequent sea trials two days early, a “first in a long time.” Eisenhower will head to the shipyard in the next week or two to get a 10-day jumpstart on its availability as a risk-reduction measure. USS Abraham Lincoln (CVN-72) just wrapped up its four-year refueling and complex overhaul at Newport News Shipbuilding and is now pierside at Naval Station Norfolk, and USS George Washington (CVN-73) is pierside at the naval station but soon heading to Newport News to begin its own RCOH. The service’s newest carrier, the recently commissioned USS Gerald R. Ford (CVN-78), will be in and out of its Norfolk pier as it conducts post-commissioning tests at sea. And the remaining East Coast carrier, USS George H.W. Bush (CVN-77), is conducting operations in the North Atlantic on the tail end of a deployment to the Mediterranean and the Middle East.