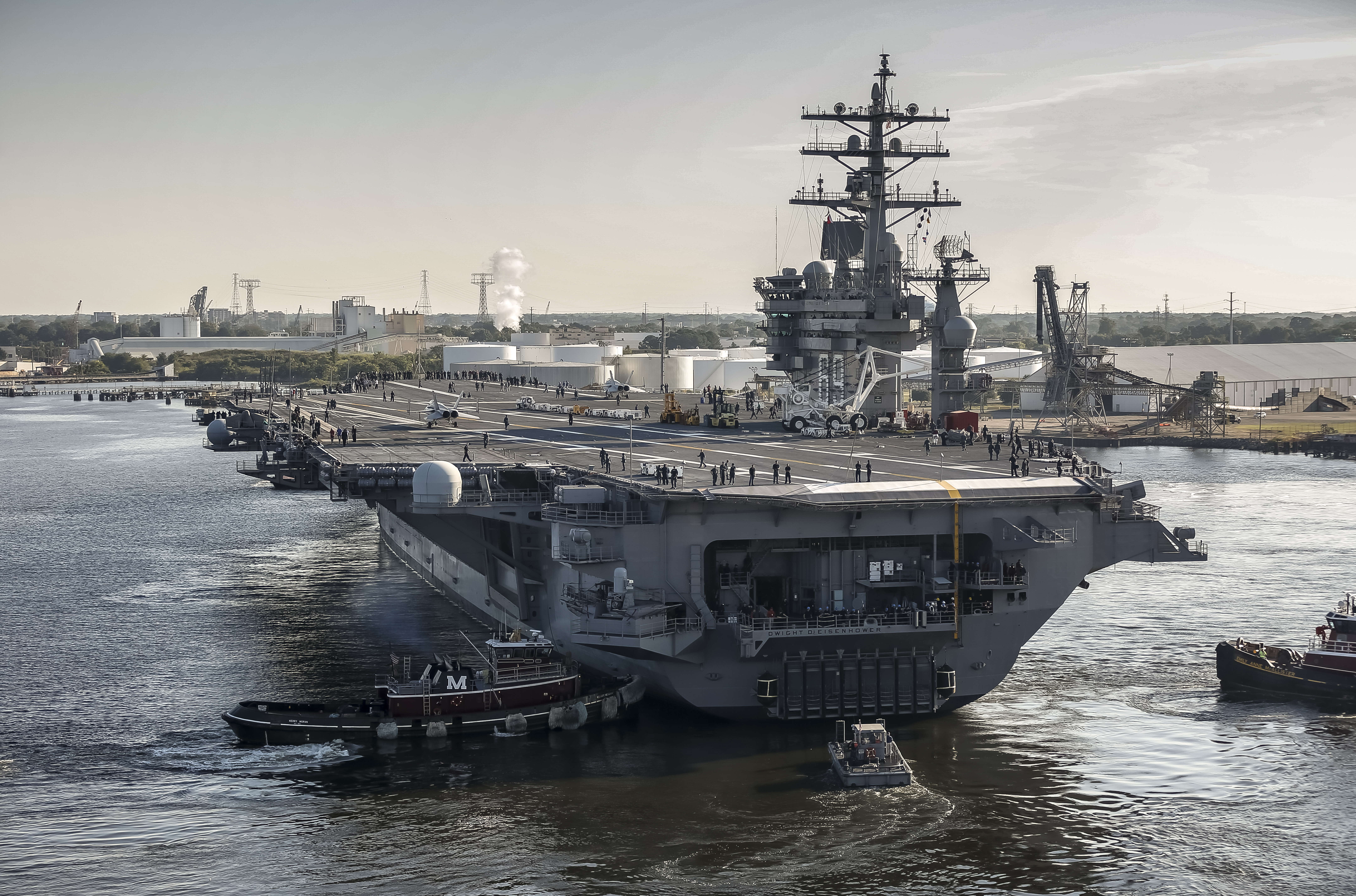 SAN DIEGO – The aircraft carrier USS Dwight D. Eisenhower (CVN-69) is now back to sea after a nine-month extension of its docking planned incremental availability – but the scheduling problems it created will trickle through the carrier fleet, the Navy’s air boss said Tuesday.

Vice Adm. Mike Shoemaker, commander of Naval Air Forces, said the American Society of Naval Engineers’ annual Fleet Maintenance and Modernization Symposium that the massive amount of extra work required on Eisenhower led to USS Harry S Truman (CVN-75) being put on a greatly abbreviated training schedule before deploying this fall and will likely compress the training schedules for Ike and USS George H.W. Bush (CVN-77) in the coming years.

Eisenhower went into a planned 14-month availability at Norfolk Naval Shipyard in September 2013 after returning from back-to-back deployments. The workload continued to grow, and the availability was extended several times – and eventually in October 2014 the Navy decided to give Eisenhower’s fall 2015 deployment to Truman.

In all, the Eisenhower maintenance availability took 23 months, and the ship will have to hurry to prepare for the next planned Atlantic Fleet deployment next year. With Eisenhower finally out of the Norfolk Naval Shipyard, Bush can go in for maintenance but may face some schedule pressure afterwards to meet the already-planned deployment schedule despite its maintenance delay.

As for Truman, Shoemaker said the scheduling headache caused by the carrier deployment swap was compounded by a maintenance extension of its own.

“Instead of a full six-month [maintenance availability], [Truman] got a three-and-a-half-month carrier increment availability. And that actually extended, almost double the time and double the manpower to get Truman out,” he said.

That maintenance period extension ate away at an already tight training and workup schedule for Truman.

“What’s normally planned from flight deck certification, that first event you do post-availability, to the start of COMPTUEX, our major evaluation exercise – planned for 154 days normally in our optimized fleet response plan. Truman will get 40. 40 days, that’s almost a quarter of the time, so the risk the strike group commander, the carrier [commanding officer] and the air wing commander are having to manage and absorb there is significant,” Shoemaker said.
“There’s no white space between major events as they work up where you can kind of take the lessons learned from the last exercise, kind of build upon those, let the squadrons work through that, and then be ready for the next event.”

That compressed workup schedule may apply to the next two East Coast carriers as well. Eisenhower will face a pressurized workup period before deploying next year, “and on the backside, because of her delay and Truman’s delay, Bush, which is the next carrier at Norfolk Naval, is probably at risk as well right now and looking at some compressed workups.”

Shoemaker attributed Eisenhower’s nine-month delay to a variety of factors. In part because of the back-to-back deployments, the ship needed two-and-a-half times more work than engineers had planned for. A crane operations mishap at Norfolk Naval Shipyard led to restrictions that slowed down work on the carrier, he said. Many ship systems weren’t turned on until final testing, which showed many previously undiagnosed problems with the ship. And the yard faced some efficiency problems as the end date continued to slide to the right.

As the deadline would shift to accommodate problems in one part of the ship, “all the rest of the work seemed to expand to fill that new date. So if we all agreed we would slide the date from November, our first move was to January, and kept moving right from there – but as that happened, instead of just the other contracting topside work saying okay, let’s just get that all done so we can focus on what’s left in the plant, or whatever it may be, it seemed like … the rest of the work sort of expanded to fill whatever the new date may be,” Shoemaker explained.

“We’ve got some work to do and lessons to apply there,” he said.