Two carrier strike groups will operate concurrently in the Mediterranean Sea for about two and a half weeks, marking the first simultaneous carrier operations in the region in several years.

The Harry S. Truman Carrier Strike Group is on its 207th day of deployment and on June 3 entered the Mediterranean after months of U.S. 5th Fleet operations. The Dwight D. Eisenhower Carrier Strike Group chopped into U.S. 6th Fleet yesterday after leaving Norfolk on June 1 and will soon reach the Med.

However, it is unclear if both carrier strike groups will work together to strike ISIS targets during their overlap in the Mediterranean. Navy spokesman Lt. Loren Terry told USNI News that he could not discuss future operations and that those details may not have been decided yet.

For now, the Ike CSG is involved in Great Green Fleet operations, to include a multi-day passing exercise (PASSEX) with units of the Italian Navy’s Flotta Verde, according to a U.S. 6th Fleet news release.

“The PASSEX will highlight energy conservation operations and will involve a refueling at sea event during which an Italian oiler will refuel Ike CSG ships with advanced alternative fuel (F76 equivalent),” according to the statement.

The Truman CSG, on the other hand, has flown 68 combat sorties and delivered 52 precision guided munitions to targets in Iraq and Syria since moving to the Mediterranean and has flown 1,856 combat sorties and expended 1,481 pieces of ordnance throughout the whole deployment, as of June 8. The Truman CSG set the record for the most pieces of ordnance dropped as part of Operation Inherent Resolve and its pre-moniker “Syria-Iraq crisis response” – significantly more than the Theodore Roosevelt Carrier Strike Group, which previously held that record at 1,074 pieces, according to U.S. Navy data obtained by USNI News. 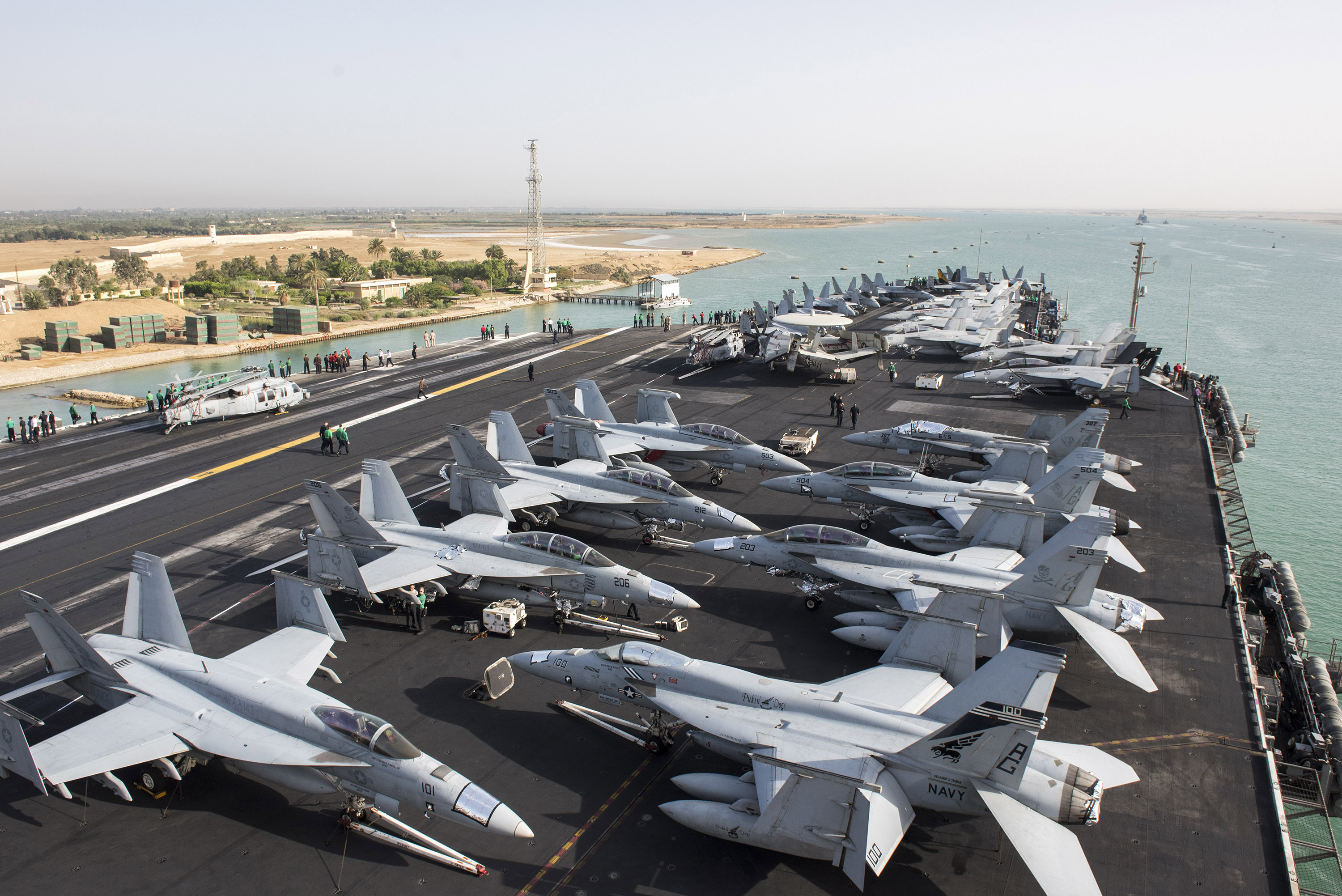 The aircraft carrier USS Harry S. Truman (CVN 75) transits the Suez Canal on June 2 on its way to the Mediterranean for continued strikes against ISIS. US Navy photo.

“We are having an impact,” Rear Adm. Bret Batchelder, commander of Carrier Strike Group 8, said in a Navy statement about the Truman CSG deployment.
“However, it’s not just about the number of weapons we’ve put on target, it’s about the combined efforts of the 65 coalition nations participating in OIR who – together – have retaken approximately 45 percent of the populated land ISIL once controlled in Iraq, and are improving regional stability and conditions for the indigenous people of Iraq and Syria.”

Whether both CSGs fight ISIS together or maintain separate missions during their shared two-and-a-half weeks in the Mediterranean, the optics of having so much naval power in U.S. 6th Fleet is important, Terry said.

“Having these strike groups in the Med at the same time demonstrates our commitment to safety and security in the region,” he said, noting that having two carriers pass in the night is not uncommon but that an extended overlap hasn’t happened in recent years. With so many carriers, destroyers and cruisers together, “they’re all there and they’re ready for tasking, and that sends a strong message of support to our allies and our partners over there,” he said.

The West Coast-based John C. Stennis Carrier Strike Group is currently deployed to the Pacific now and has spent much of its time in and near the South China Sea. The Japan-based Ronald Reagan Carrier Strike Group departed on June 4 after completing a six-month maintenance period. Defense News reported this week that this is the first time four aircraft carriers have been deployed at once since November 2012.

During operations in Iraq and Afghanistan the Navy routinely had two carriers launching aircraft for strike missions – from 2010 to 2013 the service maintained a two-carrier presence in U.S. Central Command – but sequestration and its subsequent spending caps and readiness challenges have lowered carrier presence in the region and around the globe.