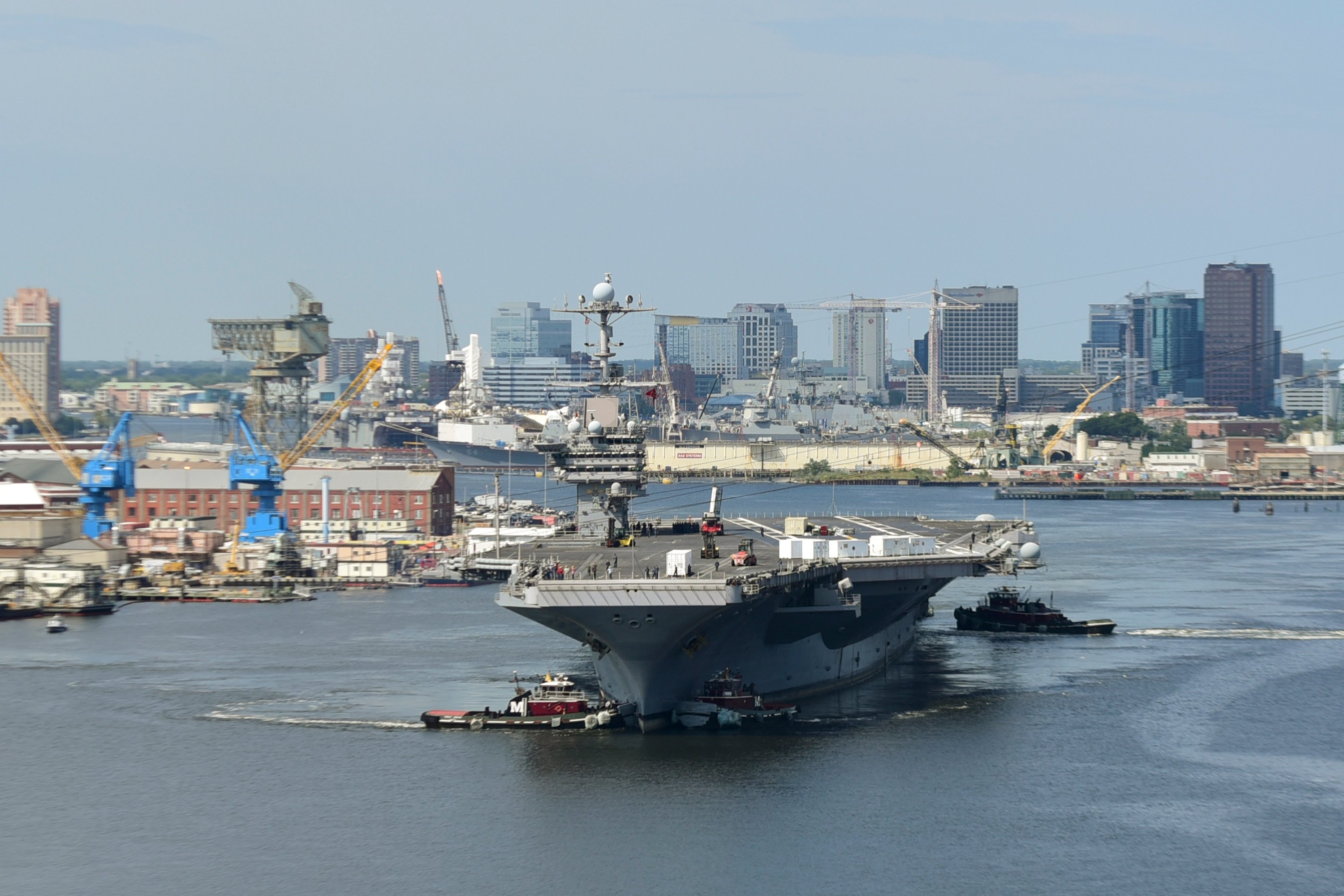 Truman deployed to the Middle East in July 2013 and then again in November 2015 when USS Dwight D. Eisenhower (CVN-69) was not ready for its scheduled deployment. Eisenhower had done its own back-to-back deployment in 2012 and 2013 – and overall performed four deployments in five years, with only one full maintenance period in that timeframe – and the maintenance team continued to find more and more problems as they worked on that carrier. Ultimately, a 14-month maintenance period turned into a 23-month ordeal for Eisenhower, which forced Truman to deploy early with only a three-month maintenance period and 40 days for crew training. Truman’s seven-month deployment was lengthened to eight months, to avoid a gap in presence before Eisenhower could arrive in theater, and many worried Truman would end up in an extended maintenance period similar to Eisenhower’s after the half-length maintenance period, the one-month extension and a record-breaking high operating tempo Truman faced while launching sorties against Islamic State targets.

However, Naval Air Force Atlantic spokesman Cmdr. Dave Hecht told USNI News on Jan. 5 that the aircraft carrier has reached the 25-percent complete mark and looks to be on track to complete maintenance in the 10-month window. USNI News understands that the originally eight-month maintenance availability was extended by two months by U.S. Fleet Forces Command in late summer, before the carrier moved to the Norfolk Naval Shipyard. 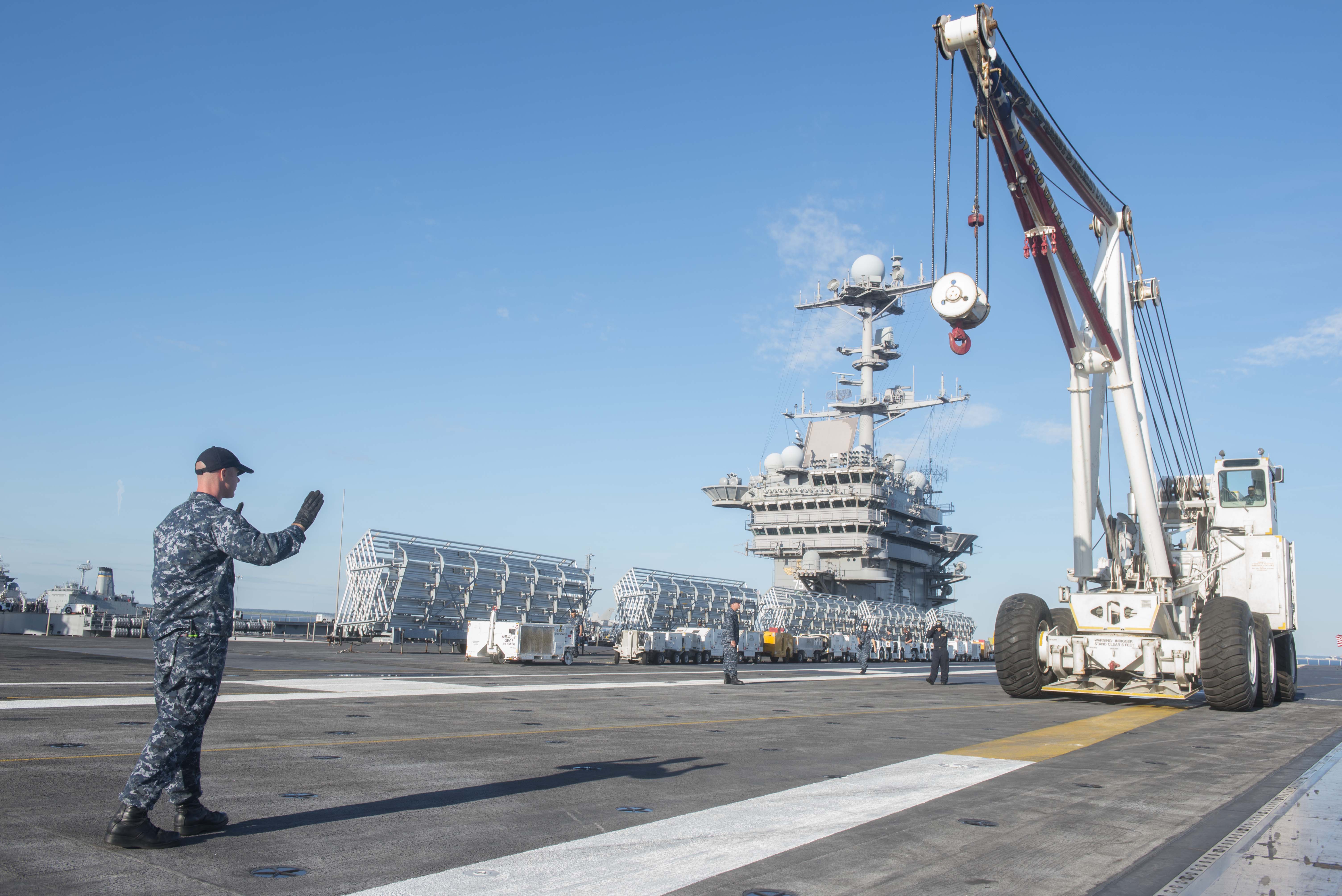 The decision to extend the Planned Incremental Availability to 10 months “was made after reviewing the totality of the maintenance work package required; in other words, the normal scheduled maintenance dictated by the Class Maintenance Plan (CMP) plus the deferred maintenance from the previously scheduled but shortened maintenance period in 2014-2015, plus any additional maintenance items identified during routine inspections,” Hecht said.
“Deferred work, which is incorporated in the current PIA, includes upgrades of the ship’s propulsion system and Consolidated Afloat Networks and Enterprise Services (CANES) – a computer network modernization which normally requires eight months by itself to be installed, tested and verified operational.”

He explained that the work items from those three categories were combined and prioritized, and the 10-month timeline was determined based on “the total scope of the maintenance work package required, the man hours as associated to complete the maintenance work package, the analysis of what work can be completed concurrently, the number of personnel available to work on the particular project and the productivity factor of the shipyard workers, plus a nominal growth work buffer.”

A “25% Conference” was held on Dec. 15, 2016, a quarter of the way through the maintenance availability, to bring together all parties involved in the work package. Based on that meeting, Hecht said Truman “is on track for an on-time completion.”

“As the PIA continues, there are many key milestones which are closely tracked to sustain timely, forward progress in order to ensure the on-time completion,” he said, noting “completion of habitability renovations in key work and living spaces, as well as light-offs of major systems – particularly in the computer network and propulsion areas” as examples.

Naval Sea Systems Command personnel embarked on Truman during the second half of the deployment to begin inspecting the ship, noting its material condition and planning requirements and logistics before the ship arrived at Naval Station Norfolk, Va., and a planning team at Norfolk Naval Shipyard was assembled more than a year in advance to keep work on track.

If the ship stays on track, Truman would begin sea trials this summer.