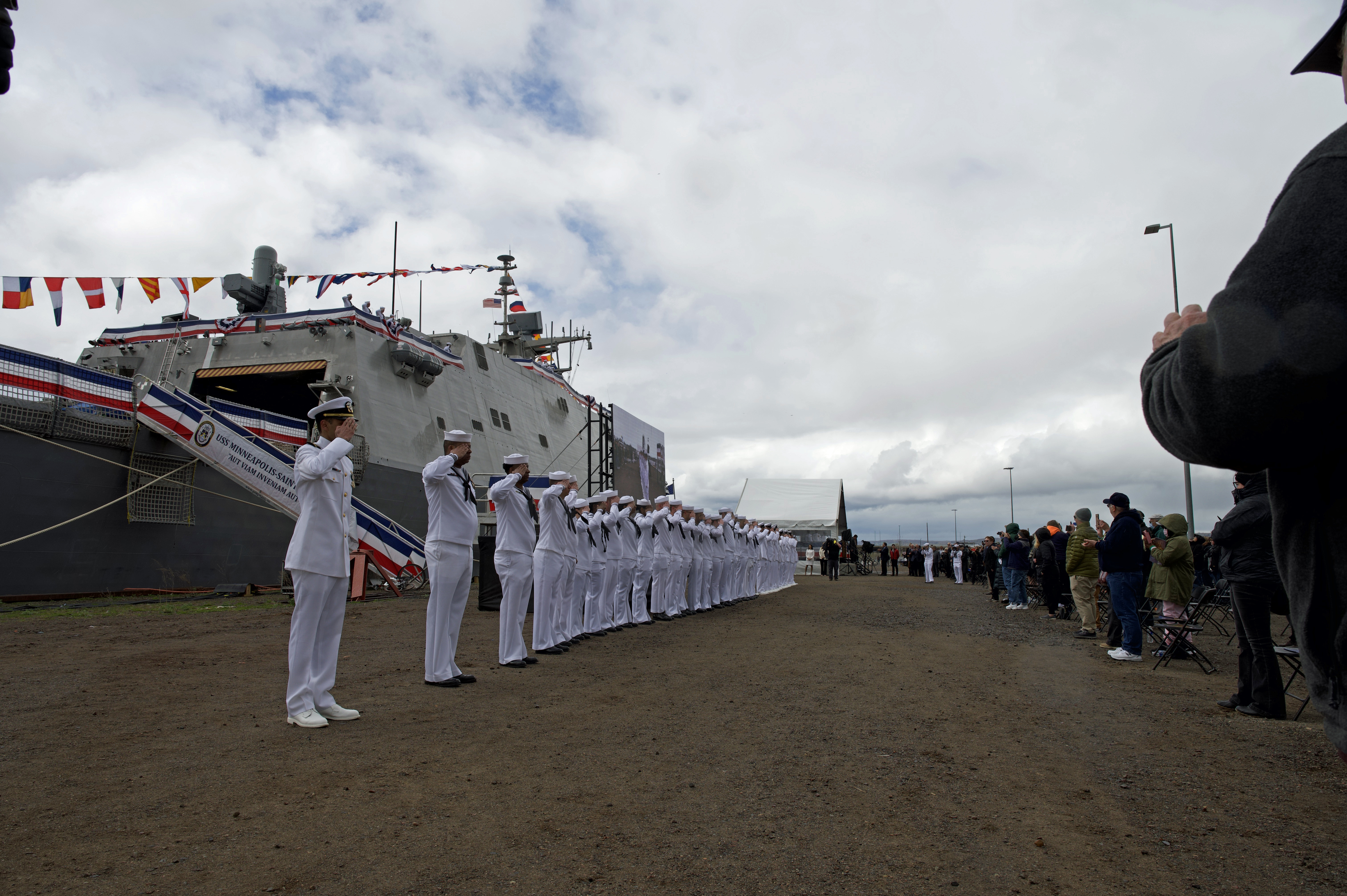 USS Minneapolis-Saint Paul (LCS-21) Sailors salute the audience during the commissioning ceremony of the ship in Duluth, Minn., on May 21, 2022. US Navy Photo

“LCS-21 is the second ship to be named after Minnesota’s twin cities, or as Minnesotans may affectionately refer to as ‘the cities,’ honoring the citizens and their proud history of naval service,” Raven said at the commissioning ceremony.

“I am pleased to celebrate this moment while in Duluth. Duluth is also a twin city, known as the twin ports, while also maintaining the largest port on the Great Lakes. it holds the status of the farthest inland port, granting access to the Atlantic Ocean, 2,300 miles away,” Raven added. “Duluth not only has a well-established and thriving maritime community, it also has experience with hosting the Navy, granting ships like USS Freedom, USS Clark, USS Samuel E. Morison, the privilege to port here.”

The ship is the first one to be commissioned in Minnesota, Klobuchar said at the ceremony.

The ship will be based at Naval Station Mayport, Fla., where the Navy homeports its Freedom-class LCSs.

The Navy took delivery of Minneapolis-Saint Paul in November after halting Freedom-class deliveries in January 2021 due to a class-wide issue that affected the combining gear, a gearing mechanism that marries up the ship’s gas turbines with its diesel engines.

“I feel confident that we have applied that technical rigor to address this problem. And I look forward to delivering LCS 21… as well as the rest of the Freedom variants of the LCS class,” Jay Stefany, who at the time was performing the duties of the assistant secretary of the Navy for research, development and acquisition, told reporters in November.

Since discovering the problem with the combining gear, the Navy has announced plans to decommission all Freedom-class LCSs through USS St. Louis (LCS-19). When the Navy disclosed its plans during the Fiscal Year 2023 budget rollout, the proposal at the time included all Freedom-class ships currently in service.

Navy deputy assistant secretary for budget Rear Adm. John Gumbleton said in March that the service is seeking to decommission the Freedom-class ships because it also chose to cancel the anti-submarine warfare mission package for the LCS Mission Module.

“The programmatic decision was actually looking at the ASW variant. And the ASW variant – mission module – huge challenges, not going to work. And we’re buying in this budget our fourth frigate. And the fourth frigate has what we believe is going to be an effective ASW capability and so that’s where we chose to take risk in our LCS portfolio,” Gumbleton said at the time.

The Navy struggled to field Raytheon’s AN/SQS-62 variable depth sonar (VDS) on the Freedom variant. The cancellation of the ASW mission package recently triggered a Nunn-McCurdy breach for the LCS Mission Module program.