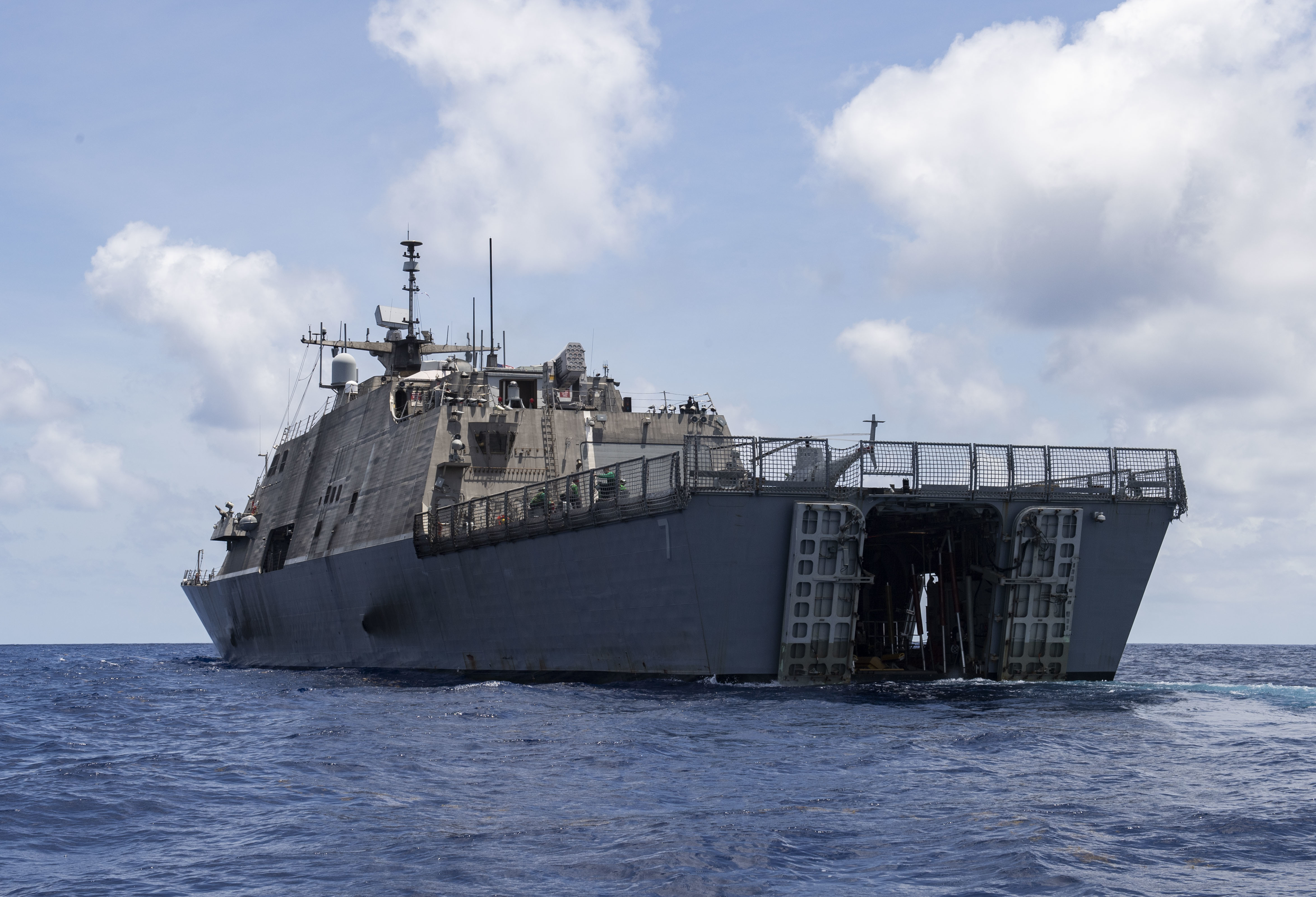 This post has been updated to add additional context to the cost of repairs to the ships in the class.

The Navy has determined a flaw in the Freedom-class Littoral Combat Ship’s combining gear, a complicated gearing mechanism that links the engines of the ship, is an engineering defect that shipbuilder Lockheed Martin now has to fix, USNI News has learned.

Over the last year, the Navy has linked propulsion failures in USS Detroit (LCS-7) and USS Little Rock (LCS-9) to a latent engineering defect in the bearings system that links the ship’s Rolls Royce MT30 gas turbines and the ship’s Colt-Pielstick diesel engines, which power the main drive shaft to achieve the ship’s 40-knot top speed.

As part of the defect determination, Lockheed Martin has been notified by the Navy that the service would not accept delivery of additional Freedom-class hulls until the company fixed the problem in the design, and that the company is responsible for the fix, a Navy official confirmed to USNI News this week.

“A joint Navy and Lockheed Martin team with RENK AG, the original equipment manufacturer, conducted a root cause analysis and determined a class design defect exists with the high-speed clutch bearings,” Naval Sea Systems Command said in a Tuesday statement to USNI News.
“A design fix has been developed and is in production, to be followed by factory and sea-based testing. The Navy is determining the plan to install this fix on ships in the fleet.”

The cost to fix the issue across the class has yet to be determined, Capt. Danny Hernandez told USNI News on Tuesday.

Over a period of time, the bearings wear faster than anticipated and result in a failure of the combining gear. The problem was independent of the software glitch that resulted in the damage of the propulsion plant of USS Milwaukee (LCS-5) in 2015 or operator error that led to the damage of a different combinging gear on LCS USS Fort Worth (LCS-3).

In a statement, Lockheed Martin said it was committed to a fix for the program.

“In partnership with the U.S. Navy, Lockheed Martin is aggressively pursuing a resolution to the gear issue the Freedom-variant Littoral Combat Ship is currently experiencing,” Lockheed Martin said in a Tuesday statement to USNI News.

The fix, according to two sources familiar with the planning process, involves replacing the two high-speed clutch bearings with a different bearing version that would not fail as easily.

“We’re going to change the bearing type on the clutch itself in the gears, and that designed fix has been reviewed and vetted by the Navy. … It is a pretty complex repair because you do need to get into the gear,” the official said.
“Before [the fix is] installed, it will go through a test plan that the Navy approves, and it will be kind of a two-phase test plan. We will have land-based testing that will be done at the factory at RENK. And to give you a sense of the timing, I expect that that will happen this spring.”

Following the land-based testing, the Navy will likely test the fix at sea with the future Minneapolis-Saint Paul (LCS-21). Minneapolis-Saint Paul and Cooperstown (LCS-23) completed acceptance trials last year and both ships will remain in Wisconsin until their combing gear fixes are complete. Both ships will also undergo additional work that was slated for the ships’ post-delivery maintenance periods at their planned homeports in Mayport, Fla., to minimize delay in getting the ships operationally ready, a source familiar with the process told USNI News.

The delay will also mean Minneapolis-Saint Paul will likely miss its planned commissioning ceremony in Duluth, Minn., scheduled for May, the Navy official told USNI News.

While the Navy and the companies know what to fix, they are now figuring out how to most efficiently access and replace the gearing mechanism found deep in the ship. Lessons learned from the initial repairs after the combining gear failures on Detroit and Little Rock have shown that the repairs can happen without having to put the ships in a dry dock; instead, the repair yard could build a cofferdam around part of the hull that needs to be cut and then navigate through the piping and wiring to get to the gear.

Lockheed Martin is also testing a method the company developed internally that would allow the repair to occur without cutting into the hull of the ship and could save months on the process, said a source familiar with the ongoing repair process.

The land-based testing in Germany will be conducted on the four combining gears RENK has built for the four frigates for the Royal Saudi Navy that will be built at the Wisconsin yard based on the LCS design, the source said. The fix will be in place on the gears, and the bearing problem won’t delay the construction of the four Saudi ships, the source said.

In the meantime, the current Freedom-class LCSs are operating under a propulsion advisory that allows the ships to operate with restrictions that would prevent the bearing fault. Under the restrictions, the ships can still operate up to about 35 knots and still be operational, the source said.