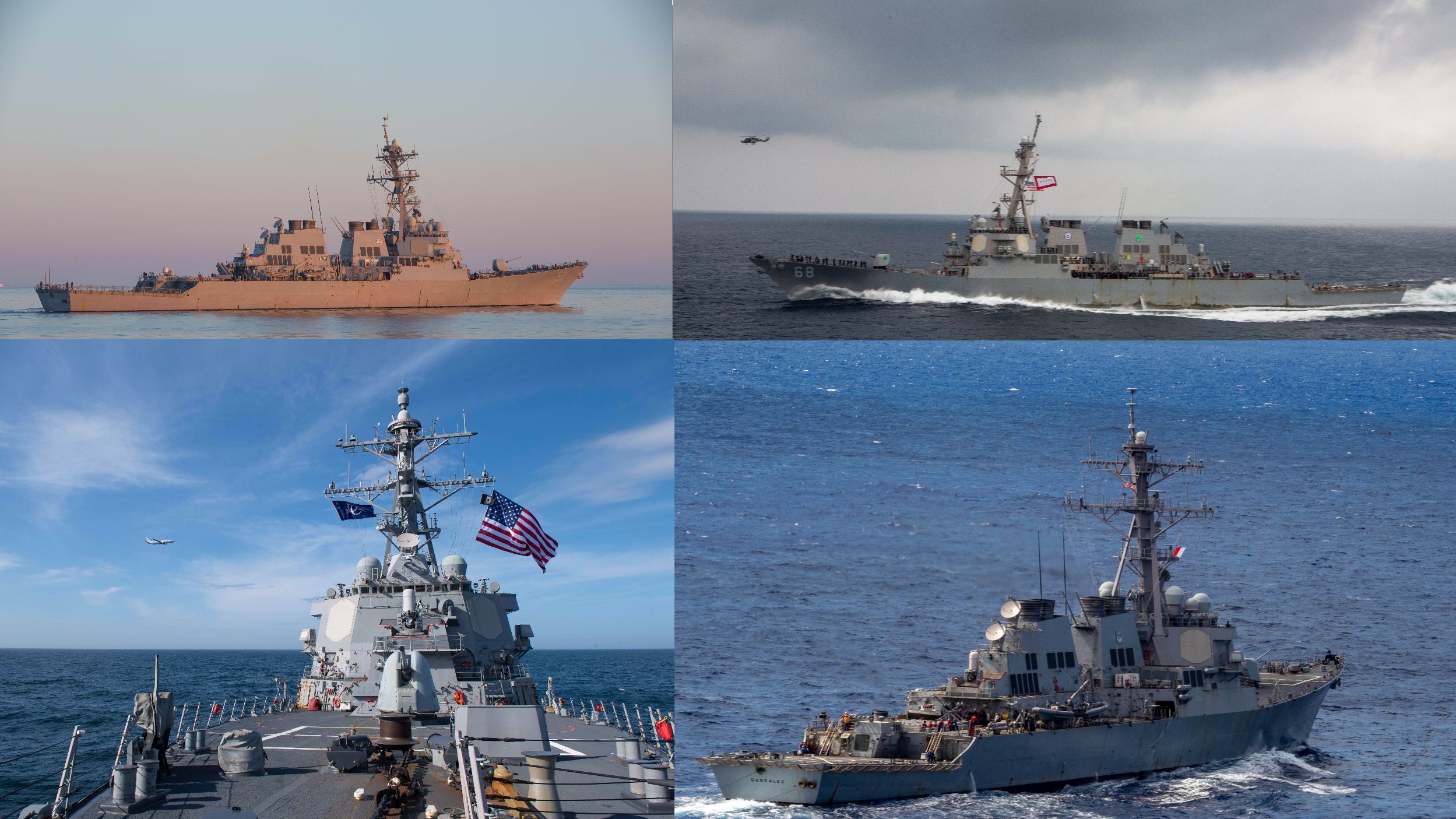 The four ships, the Navy deployed from the East Coast to US 6th Fleet. US Navy Photos

This post has been updated to correct the homeports for USS Mitscher (DDG-57) and USS The Sullivans (DDG-68).

The Navy sortied four East Coast guided-missile destroyers as the U.S. and NATO have massed naval forces in the region, USNI News has learned.

“Throughout their deployment, they will participate in a range of maritime activities in support of the U.S. 6th Fleet and our NATO allies,” Navy spokesman Cmdr. Arlo Abrahamson told USNI News on Thursday.

Gonzalez and Mitscher, based at Naval Station Norfolk, Va., and Donald Cook and The Sullivans, based in Naval Mayport, Fla., departed from the East Coast in January, according to ship spotters.

All four ships are also configured for ballistic missile defense.

Cook and The Sullivans both returned from Europe last year. Cook was forward-deployed to Rota, Spain for seven years before returning to the East Coast in July. The Sullivans deployed last year with the U.K. Royal Navy’s HMS Queen Elizabeth (R08) carrier strike group and returned in November. Both ships are part of Task Force Grey Hound – an anti-submarine warfare detachment U.S. 2nd Fleet stood up last year as a sustainment mission for ships awaiting maintenance.

Navy officials on Thursday took pains not to directly tie the deployments to the simmering tensions between the U.S. and Russia over the 100,000 Russian troops on the border of Ukraine and the Russian naval buildup in the Black Sea. However, the collection of ships in U.S. 6th Fleet is the largest American naval force in Europe since 2018, according to USNI News carrier deployment database.

In 2018, the Truman CSG operated in the Mediterranean Sea for 79 days largely in support of Operation Inherent Resolve, the anti-ISIS missions in Syria and Iraq.

Now, USS Harry S. Truman (CVN-75), Carrier Air Wing 1 and its escorts have been on station near the entrance to the Black Sea since late December under orders from Defense Secretary Lloyd Austin, USNI News reported.

The Navy announcement comes a day after the Russian Navy sent six amphibious warships into the Black Sea and two Russian guided-missile cruisers to the Mediterranean Sea.