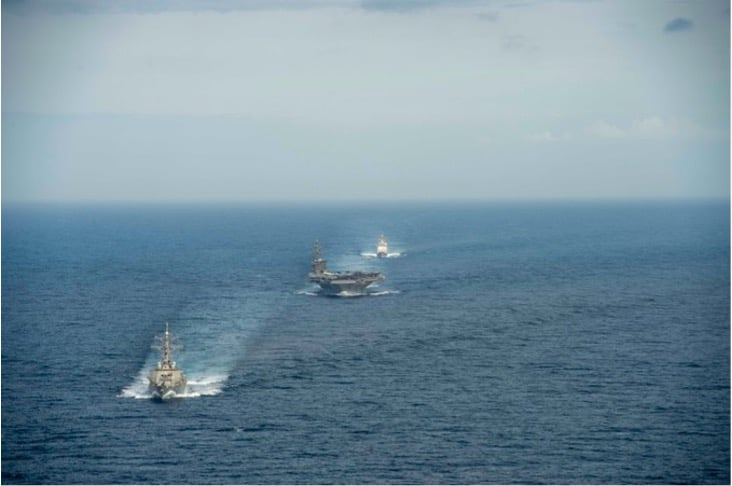 The Dwight D. Eisenhower Carrier Strike Group deployed today for the second time in a year, after wrapping up a final training and certification exercise with its new set of cruiser and destroyer escorts.

When the IKE CSG deployed in January 2020, COVID-19 was spreading throughout Asia but hadn’t hit much of the rest of the world yet. As the virus spread and created a global pandemic, the Navy implemented new guidance that shaped IKE’s 2020 deployment: chiefly, port calls were canceled. Sailors on Eisenhower were at sea for 206 consecutive days until they came home and were finally allowed off the ship. Guided-missile destroyer USS Stout (DDG-55), which deployed in the IKE Strike Group, stayed at sea for 215 consecutive days.

This time around, several things are different.

After nearly a year of operating the fleet forward amid the pandemic, the Navy has evolved its standard operating guidance several times since Eisenhower and its strike group last deployed. Sailors largely only come in contact with those in their work departments and in their berthing areas, with other interactions in the mess or lounge being ditched in favor of sailors getting their food and drinks to-go and eating in their living or work spaces. Ships also conduct random COVID testing meant to catch any asymptomatic cases before they could have a chance to spread throughout the crew.

Additionally, the crew of the entire IKE CSG was offered COVID-19 vaccines in a mass vaccination event over the weekend. About 80 percent of the crew agreed to take the shot, which cannot be mandated by the Navy yet due to being approved by the Food and Drug Administration under emergency use authorization only.

Between the measures meant to limit the spread of the virus and the high rate of sailors taking the vaccine, leadership expressed confidence that the 2021 deployment could feel much more normal than the 2020 one.

“I had a telephone conversation with a three-star and a four-star where the Eisenhower is going to be going … They’re committed to having what we would call a quality-of-life slash maintenance port visit,” U.S. 2nd Fleet Commander Vice Adm. Andrew Lewis told reporters on Feb. 12.
“And that’s something that we’re really driving to, the forward commanders are committed to doing. I’m pretty confident that’s going to happen. There’s a dim light at the end of the tunnel, but it’s becoming brighter all the time, I believe.”

Capt. Laurence Kuhn, the force medical officer at Naval Air Force Atlantic, said during the same media call that “the vaccine is our way to try to get back to some level of normalcy. So we don’t know ultimately what that will mean for us, but it certainly opens the opportunity from the significant restrictions that we’ve all been living under for the past, roughly, a year at this point.”

Leadership has not said where the strike group plans to go during its deployment, but it’s likely the group will spend at least some time working with European allies. The composite training unit exercise (COMPTUEX) the strike group went through to receive final certification to deploy included a NATO-designed vignette meant to help CSG leadership become more proficient with NATO protocols for command and control, sharing targeting data and more.

“I can’t obviously talk about what the IKE Strike Group’s schedule is going to be, but a pretty good sense that we’re likely going to be able to flex a lot of the things, especially the NATO vignettes, that we just demonstrated in COMPTUEX during our actual deployment,” IKE CSG Commander Rear Adm. Scott Robertson told USNI News on Feb. 17 in a media call about the recent COMPTUEX, which also included integrating the naval special warfare community, rehearsing an Expeditionary Advance Base Operations (EABO) scenario with a Marine Corps brigade ashore, and leveraging sophisticated live, virtual and constructive (LVC) training tools.

Two other carrier strike groups are deployed today: the Nimitz CSG in near Hawaii on its way home to the West Coast from a deployment to the Middle East, and the Theodore Roosevelt CSG is operating in the Philippine Sea, according to Thursday’s USNI News Fleet and Marine Tracker.

There are no aircraft carriers in the Middle East following USS Nimitz (CVN-68)’s departure in late January. The Navy had eased its carrier presence there in 2018 but since May 2019 has tried to keep a carrier nearby to deter Iran from acting aggressively towards its neighbors or threatening merchant shipping in nearby waters.