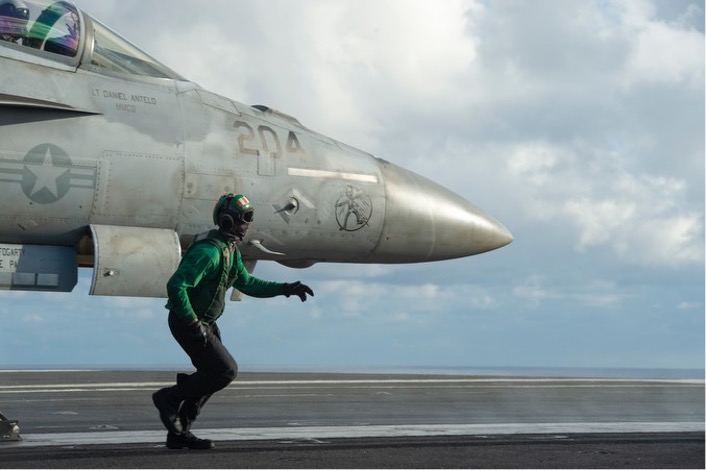 A Navy carrier strike group got a first glimpse at what future operations could look like, with SEALs providing forward targeting data and Marines on expeditionary bases providing another missile strike option to supplement the strike group’s aircraft- and surface ship-based weapons.

The Dwight D. Eisenhower Carrier Strike Group recently completed a sophisticated composite training unit exercise (COMPTUEX) with several firsts, including the incorporation of the Naval Special Warfare community and a NATO vignette meant to develop interoperability with allies, as well as an enhanced use of live, virtual and constructive (LVC) training tools, leaders told USNI News.

COMPTUEX, which brings the entire strike group together for a final exercise and certification prior to deployment, allowed the IKE CSG to simulate operating in a major expeditionary strike force: USS Dwight D. Eisenhower (CVN-69) and its air wing and escorts operated live in the Atlantic Ocean, with a simulated second carrier strike group and expeditionary strike group (ESG) with amphibious warships, cruiser and destroyer escorts and embarked Marine expeditionary unit (MEU) imposed into the LVC training tools and appearing on the carrier’s radar to be at sea alongside IKE.

IKE CSG Commander Rear Adm. Scott Robertson said during an interview today that the COMPTUEX was a “tremendous training opportunity for us to sit there and actually practice how we would actually do the command and control, how we would tactically employ all those forces.”

During the simulated operations, Robertson took the first crack at a carrier commanding SEAL platoons and special boat detachments, as well as Marines conducting Expeditionary Advance Base Operations focused on surface-to-air and surface-to-surface strike.

The EABO operations, though virtually inserted into the exercise, were supported by Expeditionary Strike Group 2 and the 2nd Marine Expeditionary Brigade staff ashore.

“We were able to actually test some of our draft C2 (command and control) elements on how would we actually fold in Marines in an EABO capacity into the [composite warfare commander] construct, which was a big step for us, figuring out how do we sit there and do mutual fire support irrelevant of whether it’s coming from an aircraft, a surface ship or an EAB established ashore somewhere,” Robertson said.

Similarly, about 100 sailors assigned to SEAL Team 10 and Special Boat Team 20 participated in the live exercise. Some additional Naval Special Warfare missions were added into the exercise virtually.

“Our participation really focused on maritime strike warfare, enabling the carrier strike group’s lethality with things like over-the-horizon targeting, kinetic and cyber operations, other things to help reduce risk to force and risk to mission,” Capt. Don Wetherbee, the commodore of Naval Special Warfare Group 2, said during the interview.

Wetherbee said the NSW community is focused on becoming a more integrated part of the fleet, in line with the chief of naval operations’ recent CNO Navigation Plan that calls for a more integrated force that can conduct multi-domain operations from a distributed posture. 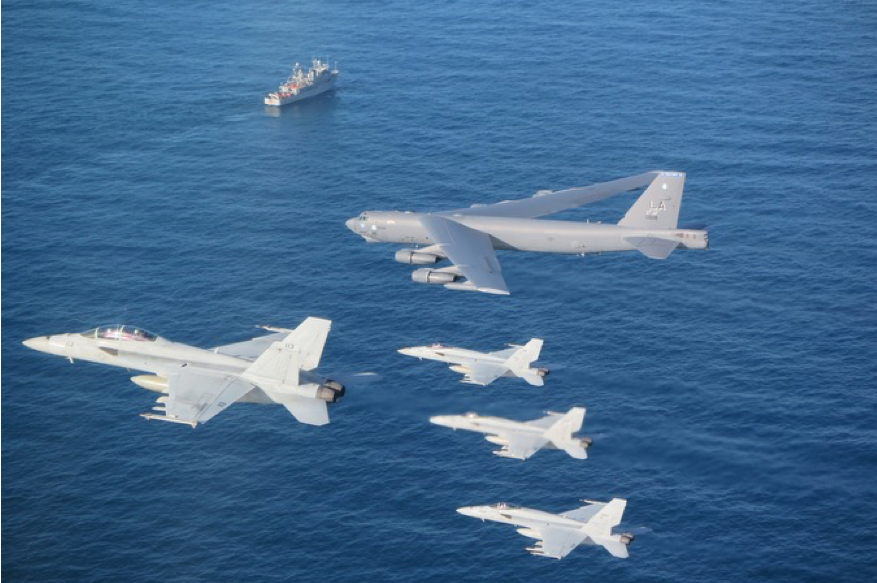 “Fleet integration and finding ways to increase fleet lethality are big priorities for our community right now and, as I’m sure you’re tracking, a change from kind of the past 20 years of our focus on counterterrorism. We’re not stepping completely away from that, but we’re taking a much more balanced approach towards both counterterrorism and global power competition, and along the GPC lines looking for how we can make unique contributions to the fleet – doing things like focusing on supporting distributed maritime operations, seeking out opportunities for integrated training like the COMPTUEX where we can both demonstrate but also, more importantly, develop those capabilities,” he said.
“Important for us to ensure that fleet leadership, fleet leaders deploying forward like Adm. Robertson, understand the capabilities that they can call on from NSW and the joint SOF force to support them. And then important for us to rehearse that integration so that if we’re called upon in competition, crisis or conflict, we’re ready to work closely with the fleet and also so that we have a much better understanding of how the fleet intends to address that high-end fight that Adm. Robertson talked about, so we can optimize our support to them.”

Wetherbee told USNI News that this combination of a carrier strike group COMPTUEX and SEAL advanced phase training is a first but would not be the last.

“Our intent is absolutely to support all the carrier strike group COMPTUEXs,” he said.
“It is absolutely a change in our focus, and really, if I’m going to be honest, getting back to our history: prior to 9/11, we were much more closely aligned with the fleet, and that is again an absolute priority for our community.”

The basic phase training for the special warfare community will remain largely the same as it has been for decades, he said.

But advanced training “is where we’re really seeing those changes. We’re working a lot more closely with the fleet, both in the carrier strike group COMPTUEXs, we’re working with the [amphibious ready groups]/MEUs as they’re conducting their workups, we’re working with the submarine force and trying to ensure that we fully understand how the fleet intends to fight in that high-end conflict, and then innovating and experimenting on our side to refine both the technology and then also the tactics, techniques and procedures that we use so that we can optimize our support to the fleet.”

Also prominent in the CNO’s Nav Plan and other recent strategies – including a tri-service maritime strategy and an Arctic strategy – is a reliance on allies and partners.

For the first time ever, the COMPTUEX included a NATO vignette that asked the IKE Carrier Strike Group to conduct a strike mission alongside a simulated NATO task force in support of the Allied Maritime Command (MARCOM) in London.

U.K. Royal Navy Commodore Tom Guy, the deputy director of the Combined Joint Operations from the Sea Centre of Excellence that helped develop and run the vignette, said during the interview that this C2 setup could be used if NATO forces had to respond to a conflict in the North Atlantic, for example, and a U.S. Navy carrier strike group were sent in to help.

“This has been a great step forward in reintroducing allied maritime interoperability, and we are really ruthlessly going after this in support of Vice Adm. (Andrew) Lewis’ intent, in his role as commander of 2nd Fleet, that he needs to have ships that can all come together as one team in the North Atlantic, and that means both the U.S. Navy and other non-U.S. NATO ships,” Guy said.
“So this has been a great step forward, and we are going to continue to develop it for future COMPTUEXs.” 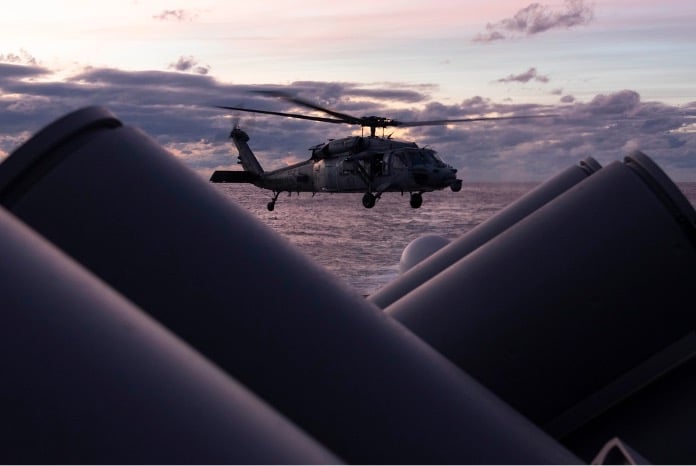 The biggest issue when U.S. and NATO forces come together is communications and, specifically, data-sharing, Guy said. Procedures and equipment are similar but not exactly the same, as they’ve diverged a bit since the end of the Cold War as different navies pursued different technologies. It’s not a huge stretch for U.S. Navy commanders to follow NATO procedures, use the right kit and communicate with the right lingo, he said, but it’s important to practice so that it becomes more of an instinct – which is why the NATO vignette was added to the final exercise before a strike group heads out for deployment.

“In order to facilitate effective information transfer across enormous distances at the speed of relevance and in the heat of the battle, there are proscribed procedures and specific kit to be able to do so with the right levels of security,” Guy said.

He said during the call that U.S. Fleet Forces Command commander Adm. Chris Grady has said all COMPTUEXs going forward will include a NATO vignette, so the CJOS Centre of Excellence is already looking to take lessons learned from the IKE CSG experience and use them to evolve the vignette for the next one coming up shortly – likely the Iwo Jima ARG and 24th MEU COMPTUEX – as well as a second unspecified event later on this year.

Guy also said that, for this first event, the MARCOM staff in the scenario were played by Centre of Excellence staff ashore at the Tactical Training Group Atlantic building where the LVC exercise was being run. This setup was agreed to so that the U.S. Navy, through the CSG 4 training unit, could retain control of the exercise and ensure it met all training goals for the COMPTUEX. Staff from MARCOM, from Strike Force NATO in Portugal and from U.S. Naval Forces Europe were involved in designing the scenario, but Guy said he’d like to have the MARCOM staff directly involved in the event next time.

Robertson praised the NATO vignette and its relevance to the IKE CSG, telling USNI News that “I can’t obviously talk about what the IKE Strike Group’s schedule is going to be, but a pretty good sense that we’re likely going to be able to flex a lot of the things, especially the NATO vignettes, that we just demonstrated in COMPTUEX during our actual deployment.”

Additionally, he said, being the first to conduct a COMPTUEX that incorporates so much of the CNO’s guidance and new operating concepts like EABO was rewarding.

“For us to be able to think multi-domain, multi-access, multi-warfare all at the same time is very much in line with the CNO’s guidance. And so we had the opportunity to flex that during our COMPTUEX process, to really truly bring it all together,” he said.
“What that does is, it sends us out the door confident in our competence.”

The Eisenhower CSG will deploy this week for the second time in a year, with the last deployment breaking records for consecutive days at sea due to the COVID-19 pandemic and mitigation measures that included not being able to make a single port call.

Robertson addressed the challenges his strike group has faced and said it makes their accomplishments during COMPTUEX all the more impressive.

“With all the other things kind of working against the strike group – this being its second deployment in close succession, obviously having to generate our forces in the COVID environment – and then for us to go out and demonstrate and perform really well – of note, we were above average compared to the last three strike groups – and so for us to go out and perform at that level with all the things kind of working against us is just a real source of pride for me as I look across my team and know that we’re ready to go downrange.”