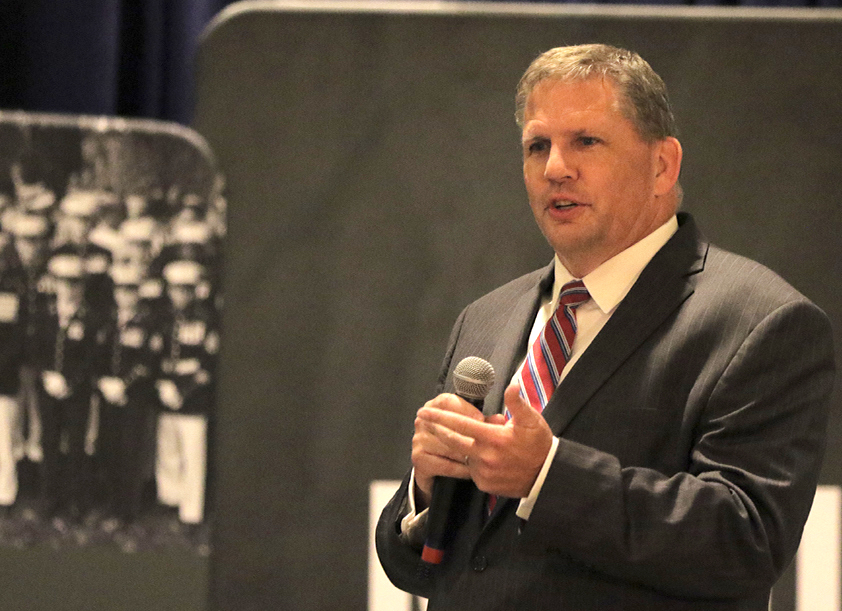 James F. Geurts, the assistant secretary of the Navy for Research, Development and Acquisition, speaks to the crowd about acquisition on Aug. 15, 2019 at the Marine Corps Ground Acquisition Award Dinner in Arlington, Va., in 2019. US Marine Corps Photo

The Department of the Navy continues to do more and more work with small businesses, again in Fiscal Year 2020 breaking records for how much money for goods and services went to small businesses – despite the challenges that the COVID-19 pandemic brought on the Navy and industry side.

DoN also continued a trend of putting more money on contract with fewer contracting actions, as part of Assistant Secretary of the Navy for Research, Development and Acquisition James Geurts’ drive for efficiency within the department’s acquisition corps.

“This year has been record-breaking,” Geurts told reporters in an Oct. 29 phone call. “Over $17 billion directly to small businesses as a prime. We not only met our kind of demanding goals but exceeded them, not only at the overall level but in sub-categories.”

Office of Small Business Programs Director Jimmy Smith said during the media call that none of these contracts were hand-outs or charity; “we’ll get you to the door; you absolutely have to deliver,” he said.

He said his office has its own staff, but there are also small business directors placed within each of the Navy’s 10 buying commands who also help advocate for small business opportunities as a requirement is first being considered and a contract written, to ensure it’s crafted in such a way that small business can participate.

An important source of small business participation is through the Small Business Innovation Research (SBIR) program and the Office of Naval Research. ONR Commander and Chief of Naval Research Rear Adm. Lorin Selby said during the call that ONR has been on a trajectory to make it easier for small business to participate – and make contracting within ONR overall more efficient – and that the command was able to kick those efforts into another gear when the pandemic struck this spring.

“We used to kind of say, here’s what we need, and we’d then see what they would come up with. We kind of flipped that around and we’ve now started asking small business, hey, what do you got, to try to actually see what they’re thinking,” said Selby, who took command of ONR in in May.
“So instead of constraining them right upfront by actually saying here’s what I need, they may have some other thing with another approach that I might not be thinking about. So if I ask the wrong question, I might not get an answer that I want. They may say, well I don’t have that.”

He said ONR had been retooling its processes over the last couple years, and several changes were ready to implement around the time COVID hit.

Noting that these companies could instead choose to work with the Army or the Air Force, Selby said, “we’re trying to do our part to make it easier for them, the small businesses, to work with us.” He added that all these efforts were meant to “try to maintain this incredible innovative engine we’ve got out there in small business.”

Asking broader questions to get a wider range of answers has proved effective, Selby said. Whereas ONR might get about 12 proposals for a typical program, since this spring that figure has jumped to about 115.

“We had a 10-X improvement just right off the bat by just changing some of the ways we ask questions,” he said.

In addition, ONR used to require about 20 pages of information in proposals, which it cut to about five but later bumped up to about 10 pages to ensure all the right information was being submitted. Still, he said, that’s a 50-percent reduction, “so it takes a lot less time for the folks putting the proposals in to us to do the proposal.”

“We’ve been kind of working on this for a couple years, but it really came to fruition this year, and we’re going to keep this going,” Selby said.

Geurts added that “this is not something that was specifically driven by COVID,” but rather that leveraging the innovation and agility of small business has been a goal of his since he came to the Department of the Navy in December 2017.

“Having worked in a small business myself before I came into government, I see their ability to help us with pivot speed and help us accomplish our goals, and so we’ve been on a several-year journey, I would say, to really get after it,” he said.

Geurts praised Smith’s office and said the increase in small business awards came not from “trying to chase a number or a goal” but “by really integrating our small business teams with our program teams so we could identify opportunities and have both a push and a pull kind of system, because if it’s a really innovative idea, it’s unlikely that we would have put it in a requirements document – if it’s really innovative, we haven’t thought of it yet.”

Geurts said that, while the Navy was on this trajectory before the pandemic hit, “COVID just reinforced how important it is to have a diverse, adaptive and I would say thriving set of performers, of which small business is a key element.”

Early on in the pandemic, the Navy paid close attention to small businesses and worked with each individually to keep them afloat.

“Each of them had different challenges and opportunities,” and the Navy took tailored steps to help, from adjusting an award date to help with cash flow to connecting them with other government agencies or banks to get a loan.

Smith said meetings were held weekly at the Pentagon level – with all the services, as well as small businesses and industry advocacy organizations – beginning in the spring to see how the Department of Defense could help support small businesses during this challenging time. The meetings are still ongoing but held every other week. Among the ideas that emerged from this effort was a “Fed Mall” that the Defense Logistics Agency set up, where small businesses with federal contracts could either offer up goods and services in the virtual marketplace or could buy goods and services at a discounted price. Instead of competing with large companies for masks, for example, or other needs to stay in business during the pandemic, the small businesses could have more assured access to these items in the Fed Mall and pay a lower per-unit cost despite making small-batch purchases. Smith said the whole Fed Mall concept was meant to show small businesses that DoD was committed to helping them remain viable during this time.

This improvement in small business awards comes as the Department of the Navy is becoming more efficient in its acquisition activities overall. Geurts said the Navy put $148 billion on contract this year – about 21 percent more than last year – and did that with 11 percent fewer contract actions.

The leaders said they aren’t content with the progress they’ve made and that there will be plenty more opportunities for small businesses coming up.

Selby, now five months into the job at ONR, said he’s talked to all the senior leaders in the Navy and Marine Corps and said it’s clear that artificial intelligence will remain a top focus for ONR. He said that in the military and in life, people are saturated with too much information, which makes it harder to make good decisions quickly. Any tools that can alleviate that stress and help make speedy decisions will be important to the Navy and Marine Corps in the coming years.

Additionally, digital engineering tools that can help program mangers do their jobs better are of interest. Selby said the sea services need to be able to pivot quickly, and if a threat or a requirement changes, they don’t have years to adjust and make a new design; multiple iterations need to be at a program manager’s fingertips, and ONR is looking for tools to help with that.