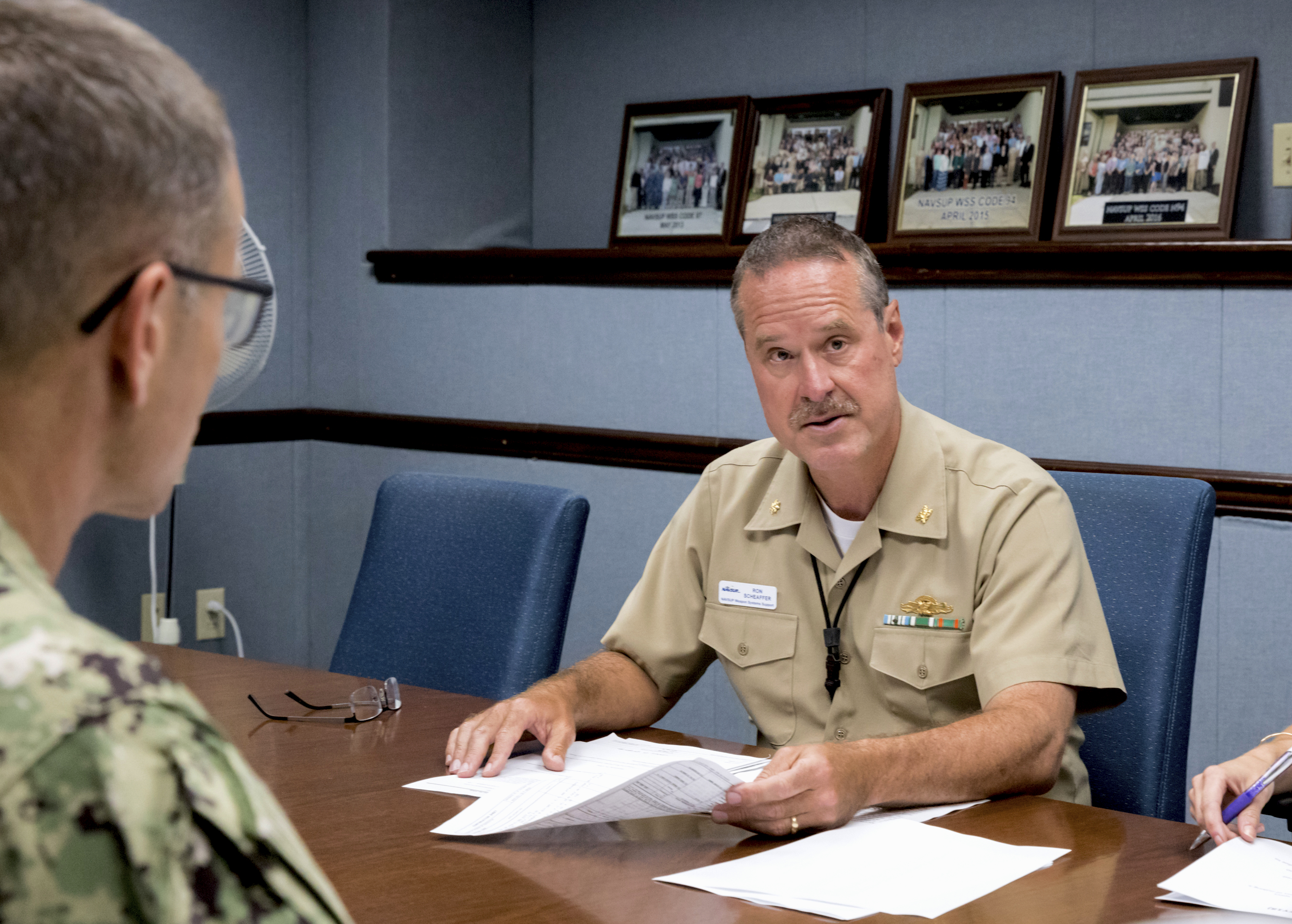 Members of the NAVSUP WSS On-Time Delivery Team meet to discuss issues that may be delaying the completion of current contracts. US Navy Photo

NATIONAL HARBOR, Md. – The Navy put more money on contract with less effort from its personnel in Fiscal Year 2019, the service’s acquisition chief said today, showing that the service is moving in the right direction in fielding new capabilities more efficiently.

James Geurts, speaking to reporters after a keynote speech at the Defense TechConnect Innovation Summit, said the Navy awarded $117 billion with 240,000 contract actions. That is about 9 percent more money for contracted work – building ships and planes, service contracts and much more – with 9 percent fewer contract actions such as awards and modifications, compared to FY 2018.

“What that shows me is, a lot of the things we were doing to get more efficient with business are paying off – i.e. we’re awarding more with less individual actions – and also the benefit of not having a [continuing resolution] in that we didn’t have to award contracts in multiple pieces and parts,” the assistant secretary of the Navy for research, development and acquisition said.

He told USNI News that the Navy saw additional benefits not just from having to make fewer contract actions but in being able to conduct that work faster.

“A lot of what we did this year was take advantage of contracts we awarded in FY ‘18 where we already had the pricing, and instead of re-asking for the pricing and taking a year to then award a contract with the same company for the same product we knew well, go immediately to using those FY ‘18 prices and contracts to immediately negotiate a FY ‘19 award,” he said.
“We did that with the F-18 [Super Hornet] multiyear; it took 17 months off of that multiyear award by using a novel technique using prices rather than doing a traditional request for proposal, get a proposal, negotiate – we went right into negotiating because we were in Lot 42 of F-18, we were pretty certain what an F-18 price is.”

Ultimately, he said, this speedier approach could also keep costs down and keep industry happy with more predictable workloads. He said some of the FY 2019 contracts for ships, for example, included options for the FY 2020 ships; both the Navy and industry could avoid the time it would take to renegotiate a whole new contract in 2020, and the companies could better predict their learning curve and project more accurate cost-savings if they were more confident they’d receive their money and start the work on time.

However, these comments came as the Navy and the federal government began yet another fiscal year with a continuing resolution. While FY 2019 started with a proper budget and department spending plan in place on time, most years in the past decade have begun with a CR of varying lengths. Geurts said there was no one particular program that was most threatened by starting FY 2020 with a CR, but he said the cumulative effect is that the CR halts Navy progress in doing its business more efficiently.

“A CR always causes inefficiencies for us, whether it’s delaying new starts until we get new start authority like with the [helicopter trainer replacement] program, or in ship maintenance having to split up different awards,” he said.
“It’s an opportunity lost, which we showed last year we could really exploit to great value. But we’ll figure out how to deal with the CR.”

He noted that the Navy had taken many steps over the years to mitigate the effects of starting the year without a proper spending plan, such as not planning to award major contracts in the first quarter of the fiscal year. But not having a spending plan and defense policy bill passed into law at the start of the fiscal year can have consequences later in the year, too.

The frigate program is supposed to downselect to a single contractor who will design and build the ships by the end of FY 2020. But, Geurts said, the program office might not be able to do some leg work today as planned because “there’s terms and conditions and there’s provisos right now that need to be conferenced. Depending on the outcome, some of those positions between the House and the Senate can have large impacts on the program, and not knowing what the conference result will be creates uncertainty, and uncertainty creates inefficiency. So for instance, there are provisions regarding sources for frigate which need to be conferenced; until we know the output of the final conference position, we won’t know the impact on the program. So what I would always say is, uncertainty generates inefficiency and perceived risk; perceived risk costs us.”

In addition to being more efficient in FY 2019 contracting, Geurts rattled off a range of statistics showing the health of the Navy/industry team. He said the Navy saw 43 percent of its work awarded in a full and open competition, with a goal of 40 percent. He said 18.3 percent of contract activities were awarded directly to small businesses as the prime contractor – beating the Small Business Administration’s goal of 14 percent “by a pretty healthy margin.”

“Why I think that’s important, obviously we get some great innovation from our small business providers,” Geurts said.

Additionally, in the Navy’s effort to bring in new partners to provide new technologies, the Navy’s use of Other Transaction Authorities grew seven-fold, from about 15 to 104 from FY 2018 to 2019. It also doubled the number of cooperative research and development agreements in place, going from more than 400 to nearly 900.

To that end, in the Small Business Innovative Research program, Geurts said the Navy is trying to help these small businesses get their research across the “valley of death” and into acquisition programs and fielded to sailors and Marines with minimal bureaucratic challenges.

He said it’s important to find an easier and faster way to transition successful research by small businesses because, while it’s frustrating for larger companies or research organizations to see delays, small businesses can’t afford the interruption in their cash flow.

“My fear is, if we don’t get that solved, besides the fact that it’s delaying getting that potential technology to the field, it also may obviate our ability to do anything with that technology because the small business will have to move on to something else as opposed to move forward,” Geurts said.

The Navy has already proven in FY 2019 it could reduce the time to get from identifying a warfighter need to getting SBIR contracts on the books, but “we can award SBIRs very quickly, and then if they have nowhere to go they’re going to kind of die in the valley of death.”