The Navy is keeping close tabs on its acquisition and maintenance efforts to identify any disruptions that arise from the COVID-19 pandemic, minimize any delays in deliveries and keep the industrial base as strong as possible during a difficult public health and economic time.

James Geurts, the assistant secretary of the Navy for research, development and acquisition, told reporters today he believes that “keeping a healthy defense industrial workforce and ensuring the economic wellness of the defense industrial base, those together will, again, allow us to ensure we’ve got the readiness we need to protect the country while we work our way through this challenge.”

He said he’s equally worried about keeping workers healthy and keeping cash flowing to businesses, and his enterprise is taking several steps to minimize how the pandemic affects the ships, planes, weapons and more the Navy buys and maintains.

First, he said, last week program offices took a baseline of their programs’ performance, so it would be clearer if any future quality or timeliness issues were a result of the COVID-19 pandemic or were problems that were already creeping into the program.

Second, he wants to make sure that the Navy accelerates its plans to award future work and process payments to contractors, so that there’s plenty of work and sufficient cash flows for companies with healthy workers today, and plenty of work waiting for companies that may have diminished workforces today but will eventually come back to full capacity. He said 90 to 95 percent of the contracting workforce was teleworking, but even being out of the office they had already proven they could accelerate some efforts.

“My goal is to ensure we have the work ready to go as the workforce is ready to accomplish that work, and that we are not having any kind of delay in terms of getting work awarded, having that all lined up. I’ve asked for some pretty aggressive approaches, even with our academic partners and how do we adjust our academic research when students aren’t there and, again, use our tenets of agility and pivot speed to adjust to this disruption, not become hostage to it,” he said during the media call.

Geurts said it was premature to predict where disruptions might occur or what programs might be vulnerable to delays, but he said he was working to ensure that, “as we come out of it, we are well-positioned to then recover as quickly as possible, because all these efforts are critical to our national security.”

He made clear he had an eye on big long-term priorities like the Columbia-class ballistic missile submarine and the Ford-class carrier program, as well as the effects the pandemic and economic slowdown is having on small businesses and research labs that have less resiliency to deal with disruptions of any size.

“The large industrial operations are challenging certainly, but I would also say there’s challenges in the small operations where if one person gets sick in a six-person shop, you don’t have a whole lot of resilience there either. And so ensuring we’re smart across the whole base is what we’re all working towards,” he said.

The Navy had already been worried about its industrial base, with many critical components built by a single supplier, or small businesses being bought up by larger corporations with ties to China or other foreign countries. Geurts had undertaken a “wartime planning” effort to look at the industrial base’s health, and he told USNI News during the phone call that that planning was particularly helpful now. With tools that map out how a disruption from a single vendor would impact an entire program, Geurts said those tools could now incorporate public health data showing where the virus is spreading fastest, allowing program managers to see if they might be at risk for disruption and work with vendors in affected geographies to put extra protections in place. 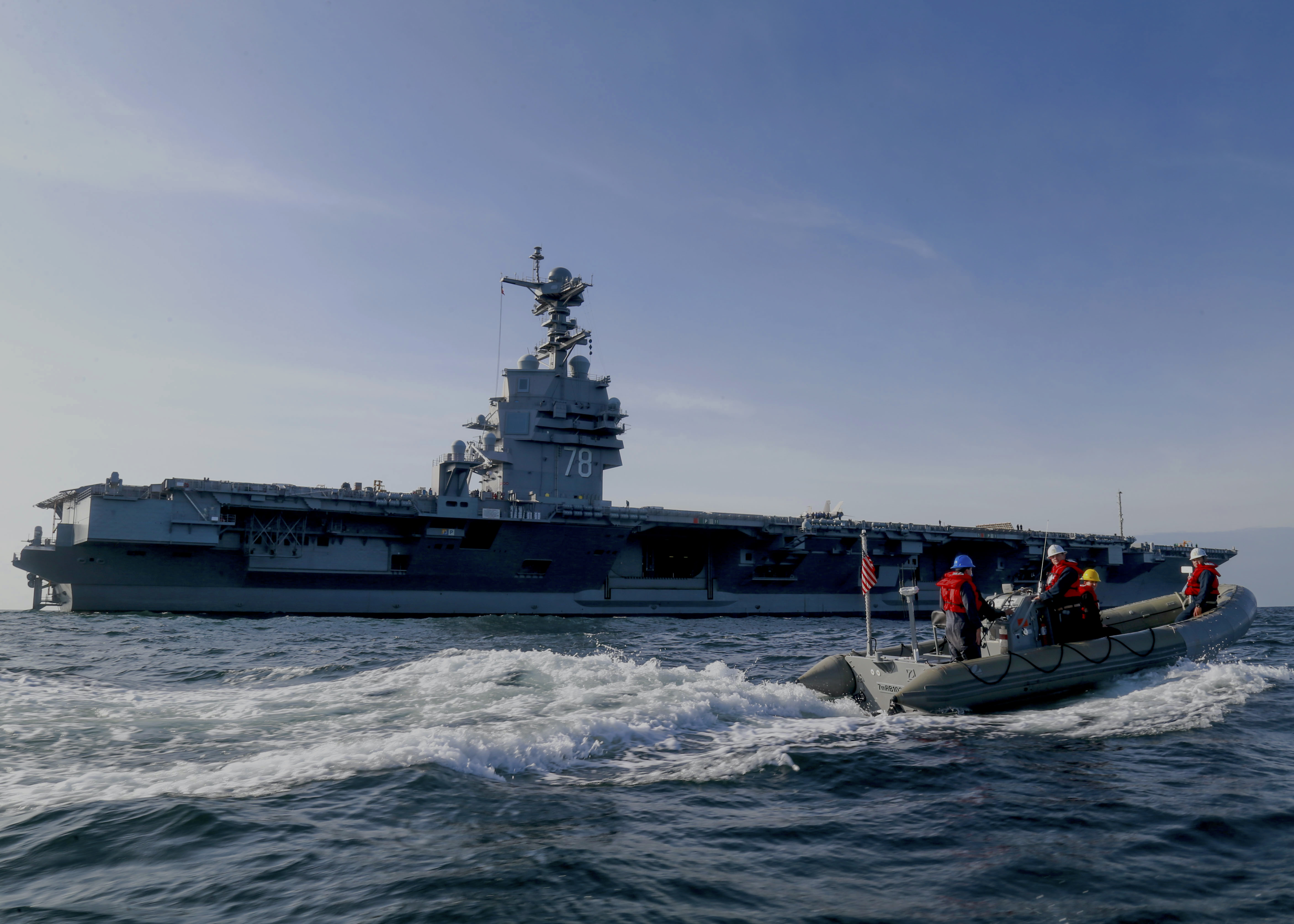 USS Gerald R. Ford (CVN-78) and one of its rigid-hulled inflatable boat steam through the Atlantic Ocean during small boat operations on Nov. 7, 2019. US Navy Photo

Geurts noted that he was in regular contact with the CEOs of major shipyards to address any concerns they had and to help share best practices to keep workers healthy and construction on schedule.

“There’s a bunch of best practices that are being shared. Again, I’m very grateful and quite frankly inspired by the openness across our defense industrial base to have a frank sharing of best practices and partnering together on how to work our way through this,” he said, with some examples being splitting work into multiple shifts – with some people coming in earlier than usual and others working later than usual, in an effort to minimize how many people they are around while at work.

In those talks, though, he is also making clear that “things we do at the prime contractor level, getting [CEOs’] commitment that those will flow down to the subcontractor level. I’m very concerned about some of our smaller suppliers who will likely feel the pinch the greatest, the fastest. So we’re all working together to ensure that we can continue to infuse the defense industrial base, relieve and remove barriers, free up funding that we already had in the system, and then where possible accelerate awards and ensure we’ve got all the work backlogged and ready to go.”

“As disruptive as this challenge has been, we still need to be ready and provide the national security, per the guidance from the president and the secretary of defense. And so working closely with all the performers on prioritizing work, ensuring that we’ve got critical activities continuing as they need to continue and that we can support the Marines and sailors we have deployed all around the world,” Geurts said.

He elaborated on the prioritization of work issue, telling USNI News that this particularly applies to the private and public maintenance yards that might have several ships in at once for repairs and upgrades.

If the workforce were to become diminished – from employees having to stay home with children who are out of school, who are at high risk of contracting the disease due to underlying conditions, or who have been exposed to the disease and must stay home – “if we’re not operating at full capacity, are we repairing things that have the most impact immediately and then managing areas where we have a little more flexibility?”

“If I have a ship that’s due out to go to a strike group in the next couple weeks, I might prioritize that over a decommissioning action or something where I’ve got a little more flexibility,” he said.
“And then also being very sensitive to, anything we stop outright can be very hard to restart outright, and so trying to also balance that we don’t have an area where we’re completely stopped.”

Ultimately, Geurts said, when the pandemic ends “there will be some amazing stories of what we were able to accomplish in spite of all of this disruption, because we’ve been working as a team, we’ve been making smart decisions, we’ve been adapting almost in real-time. And I am very very proud of what this team has been able to do together in what not too long ago we wouldn’t have even imagined as a crisis that would have hit us this hard.”