The Navy has created stability for the defense industrial base during the coronavirus pandemic by awarding contracts early to create a plentiful backlog of work, and the service’s acquisition chief said he doesn’t want to lose that stability heading into the new fiscal year, which could kick off with a continuing resolution.

Fiscal Year 2021 starts one month from today, and it’s unclear whether Congress – which has been largely focused on a pandemic relief bill that lawmakers and the White House have yet to reach an agreement on – will be able to pass spending bills in time to avoid a CR, where the military services will be restricted to this year’s funding levels and will not be able to start new programs.

“We just want to take the boldness and efficiency that we’ve been operating with over this last six months and ensure we inculcate that into our plans of actions going into the next fiscal year. A continuing resolution is always disruptive to some degree, and so because we’ve been able to get ahead of contract awards this year, that’s giving us a little more bandwidth to plan for and try to minimize the disruption of a potential continuing resolution,” James Geurts told USNI News in a phone call today, after speaking at the Department of the Navy Gold Coast Small Business Procurement Event.
“The biggest risk to the industrial base is insecurity, and I want to ensure that the strong push the Navy had over the last six months to create stability, which I believe we did effectively, we don’t lose that benefit going into a continuing resolution period.”

Since March, Geurts has repeatedly told reporters that the Navy acquisition community was getting as many contracts awarded as possible – in some cases months ahead of plan – so that suppliers big and small have plenty of work to do if their workforce is healthy – and cash to keep them going if they’re affected by the pandemic and have to close for a time due to sick workers.

“Cash flow is key. We can be a challenging customer sometimes; being a challenging customer in the middle of a pandemic can be very disruptive,” Geurts told the small business leaders at the conference.
“I would say on the positive side, we are a customer that orders in crisis, and so we’ve actually, we’re about 30-percent ahead on contract awards from where we were previously, so that’s in the $30 to $35 billion range. We’re ahead of the small business awards we made by more than a couple billion dollars compared to previous years. And so my whole goal here is, get the work on contract so that you know it’s there, that you can count on it, and that you can have that stability as you’re working through the challenges that you may be having with workforce adjustments or COVID adjustments or supply chain disruption.”

Geurts said during the event that his strategy of awarding work early throughout the second half of FY 2020 had several goals.

“Part of my strategy of loading up all this work early was to prove to ourselves we could be much more efficient than we thought we could be. Another key was, knowing that if you had the work queued up, that was going to put you in a much more stable place as suppliers to us than waiting to see if you’re going to get your award at the end of September” and having to weather the pandemic in the spring and summer with so much uncertainty.

The third benefit – “to create some bandwidth so we didn’t have our teams completely tied up getting out of FY ‘20 and then dropping the ball on ‘21” – is helping the acquisition team now.

Though his office isn’t assuming FY 2021 will definitely start with a CR, they’re planning for various scenarios now to ensure a smooth fall, regardless of what Congress does.

“We’re going to use some of the bandwidth now to make sure we’ve got our plans in place to get through what’s likely to be a continuing resolution, particularly in an election year. What I don’t want to do is accelerate forward (on awarding contracts) and then create a large valley that you’re going to have to cover through the fall. My hope is that by getting this work all awarded now, you’ve got the work in place which then can help carry you through a CR period, and then we’ve got the (Navy acquisition) workforce available to put that on contract as quickly as we get the money in ‘21.”

Geurts told USNI News in the phone call that he’s already talking to officials in the Pentagon and in Congress about anomalies, or waivers to start a new program, the Navy would need to request if there is a CR. “The biggest one is ensuring we have a smooth transition to construction on Columbia,” he said of the ballistic missile submarine program, where prime contractor Electric Boat and its suppliers are hard at work on what’s considered pre-construction activities but need the construction contract signed as close to Oct. 1 as possible to keep on schedule.

“Being able to award that contract on time as soon as we can in Fiscal Year ‘21, assuming it’s appropriated and authorized, will be the key thing we’ll be looking at in a continuing resolution period. I believe we have strong support from Congress, everybody we’ve spoken to. The need to do that is well documented, and so that will be the primary focus,” he said.
“Secondary focus will be making sure our ship maintenance activities and some of these activities that carry over through the fiscal year stay on track.” 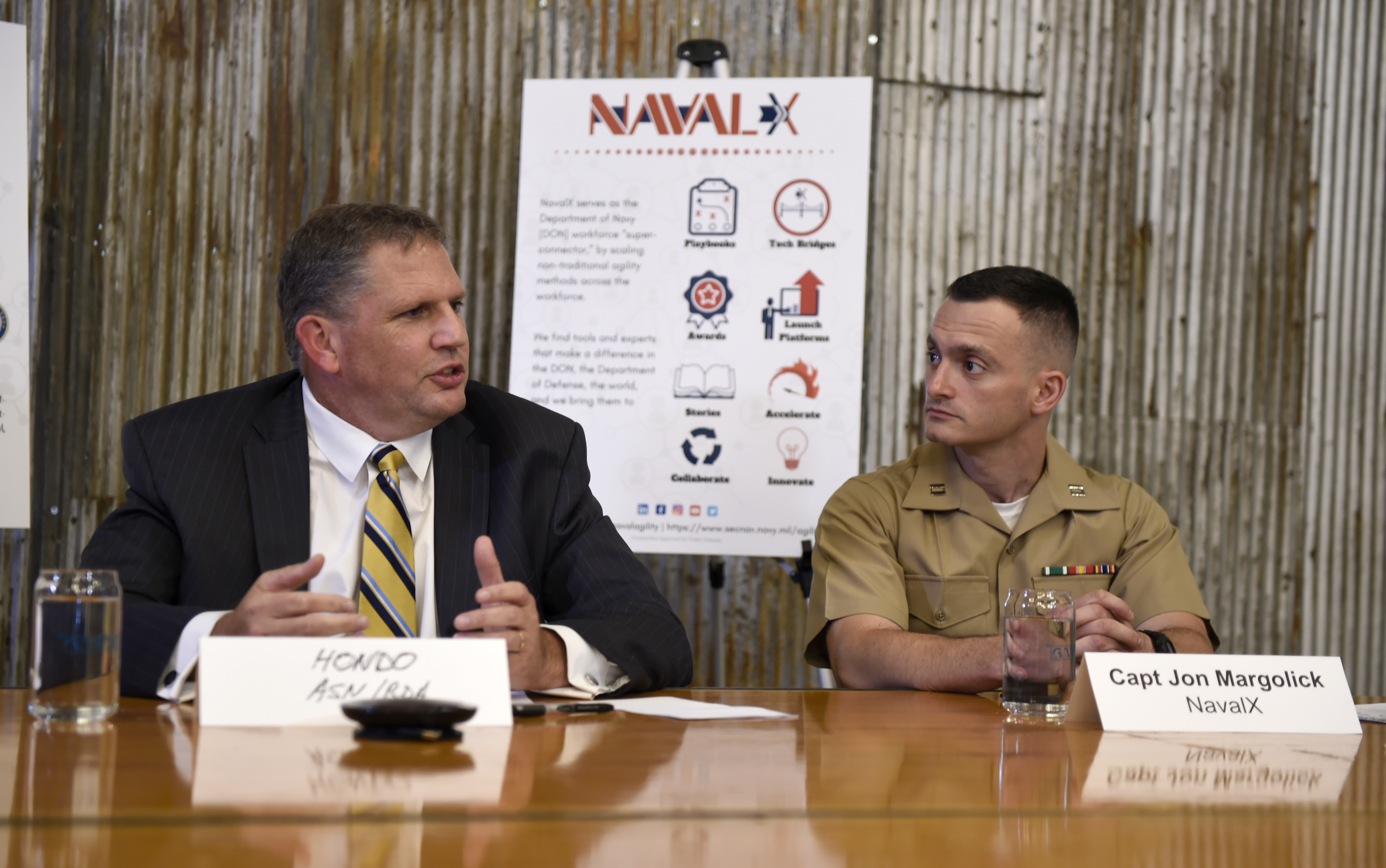 Aside from paving the way to a smoother start to FY 2021 in the event of a CR, Geurts said a lot of benefits have come out of how the Navy acquisition community has responded to the COVID-19 pandemic and that many of these changes will become a permanent part of how the Navy does business.

To make best use of the workforce’s time and resources, Geurts said the Navy has taken a hard look at the “reviewer to doer ratio” and made sure that oversight levels are appropriate and efficient.

Additionally, the service is making an effort to, “as we award contracts, award contacts with the future in mind. So having options, or priced options, or using the pricing from one year and then negotiate two or three years worth of contracts, so we don’t have to renegotiate those every time.” Geurts said the Navy had started that practice prior to this fiscal year but was doing it at a much larger scale now.

Most relevant to the small businesses he addressed today, Guerts told USNI News that COVID-19 forced the Navy to hold virtual industry days for upcoming work but that it widened the net of companies that could participate.

“Many times, a small business can only afford to go to one industry day a month because they have to travel and that’s time away from work and all that. By virtualizing them, now they can attend more of them more cheaply, and in doing so they may be able to attend an industry day where they weren’t quite sure they could come up with a solution and then suddenly find out that they can bring something to the table. So that’s a pretty straightforward one” that will be continued even after the pandemic ends, he said.

Speaking in another panel at the Gold Coast Small Business event, hosted by the National Defense Industrial Association, executives for the Navy’s various systems commands said they adjusted to the new realities of operating during a pandemic and are working to make up for time lost at the start of the COVID-19 outbreak in March.

Garry Newton, the deputy commander of Naval Air Systems Command, said NAVAIR is working to recoup time it lost due to the initial slowdown of operations early in the pandemic and anticipates catching up by the conclusion of the current fiscal year.

“We’re looking at a strong month of September to get back on plan for our depot maintenance operations and our on-site testing and evaluation work that we do in our facilities,” Newton said during the virtual conference.

John Pope, the executive director for Naval Information Warfare Systems Command, said he focused on getting modernized technology to fleet platforms as his command’s priority during the past six months.

“We almost didn’t miss a beat on critical afloat installations and modernizations. On the shore side, where our sailors ran some of our sites, in the interest of protecting the sailors from our outside folks coming in, we had to adjust schedules … so we didn’t add risk to a shore site where sailors work. And we followed a similar story afloat, but we were able to work some deals so we didn’t have as much of an impact on delivery,” Pope said.
“So we did see a delay in some of our shore work, but we kept the afloat piece going at probably – made less than 10-percent hit on productivity. And then, like the others, we have a catch-up plan for those,” he added.