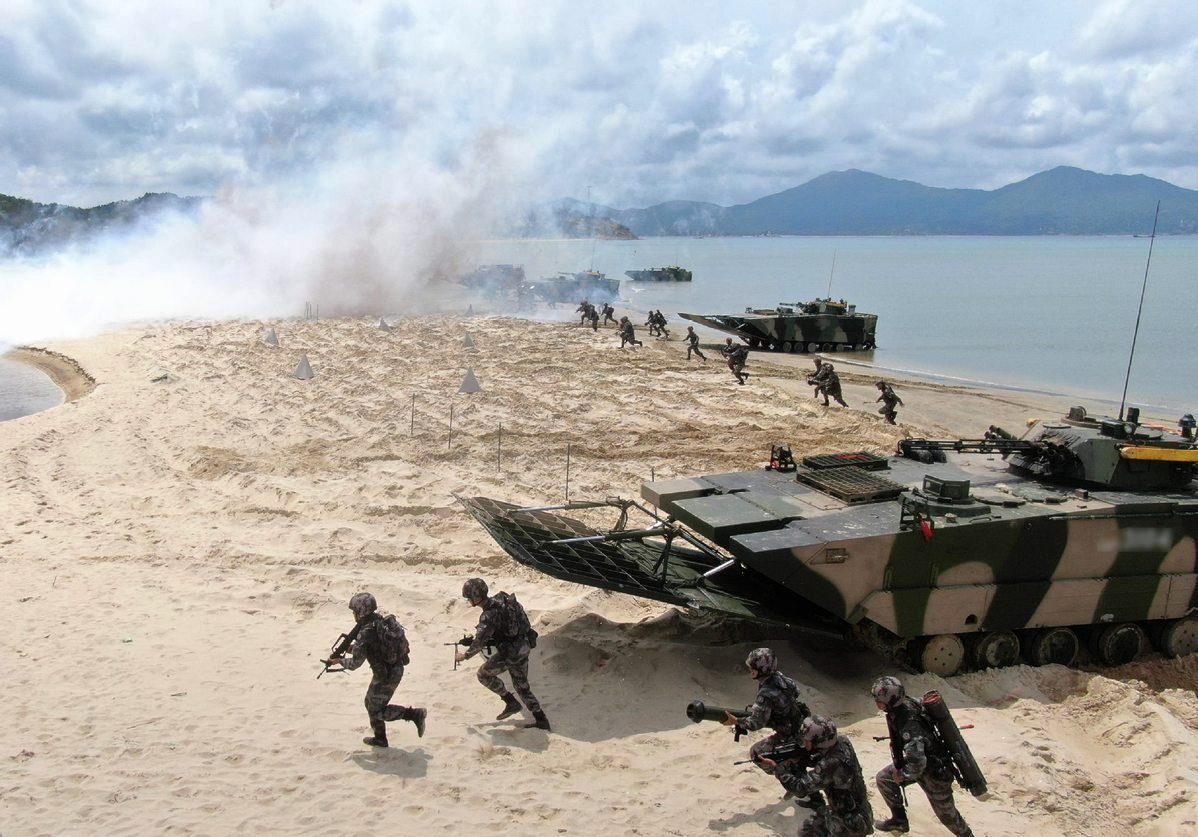 Soldiers of the 74th Army Group of the People’s Liberation Army take part in a battle drill in a coastal area of Guangdong province on June 1, 2020. Xinhua Photo

Xi Jinping’s go hard approach to bringing Taiwan to heel isn’t about to let up, but “it would be highly risky” for China to believe the United States would not intervene if it launched an all-out cross-straits invasion, a former senior Trump administration Pentagon official said.

Speaking Monday at an Atlantic Council online forum, Randall Schriver, now chairman of Project 2049, compared the island to the Fulda Gap, a pivotal point in the defense of Western Europe during the Cold War.

While “the PLA [People’s Liberation Army] is getting better” at amphibious warfare, moving “tens of thousands or hundreds of thousands” of troops “across 80 nautical miles of water” and then successfully fighting an active resistance in mountainous terrain is not likely, Schriver said.

China “prefers to win without fighting,” he added. That does not mean Xi is backing down on eventual reunification, a goal he wants to reach by the centennial of the founding of the Chinese communist party in 2021.

Neither Schriver nor the other two security and economic experts on the panel expect a major shift in American policy toward Taiwan — economically and militarily — even if former Vice President Joseph Biden is elected.

“We’re seeing an entirely different level” of pressure put on Taiwan by the mainland than it has employed against Australia, the Philippines and Mongolia, or nations that still maintain diplomatic relations with Taipei, said the Atlantic Council’s Dexter Tiff Roberts.

To the other nations, as their largest trading partner, China is most often applying economic pressure, usually without the threat of military force.

Michael Mazza, of the American Enterprise Institute, said the Taiwanese are “seeking to diversify their economic partners” to ensure their survival. Among the steps they have taken is lifting restrictions on beef and pork coming from the United States as a means to negotiate a free trade agreement and tighten ties with Washington.

So far, there has been no indication that the United States is moving toward such an agreement with Taiwan.

“Taiwan’s most important relationships are with the United States, Japan and the E.U.,” Schriver said, referring to Taiwan’s ability to grow economically in the future.

The complicating factor in that comes in the intertwined manufacturing and trade arrangements that Taiwan maintains with China and the United States, Roberts said. Using Foxconn, a large Taiwanese-based electronics manufacturer, as an example of a corporation that has top customers in both countries, Roberts said “there is pressure on them to take sides” in the competition between the two powers.

At the same time, more residents — younger ones who often support Tsai’s party, which leans toward independence — identify themselves as Taiwanese and many view the island as the Republic of China, an entity different from the mainland. “It’s a framework that the CCP [Chinese Communist Party] doesn’t like,” despite Tsai’s “creative way” of downplaying talk of an independent Taiwan, Roberts said.

“Taiwan is [America’s] ninth largest trading partner” and its response to the COVID-19 pandemic matters when considering reliable partners, Schriver said. He also cited its position as an upholder of democratic values in the Indo-Pacific as another factor in its favor.

He noted that the Trump administration “sees Taiwan as a true partner” that “punches above its weight as a good citizen.”

Taiwan “is the key to security” beyond Japan and the South China Sea. Schriver said.