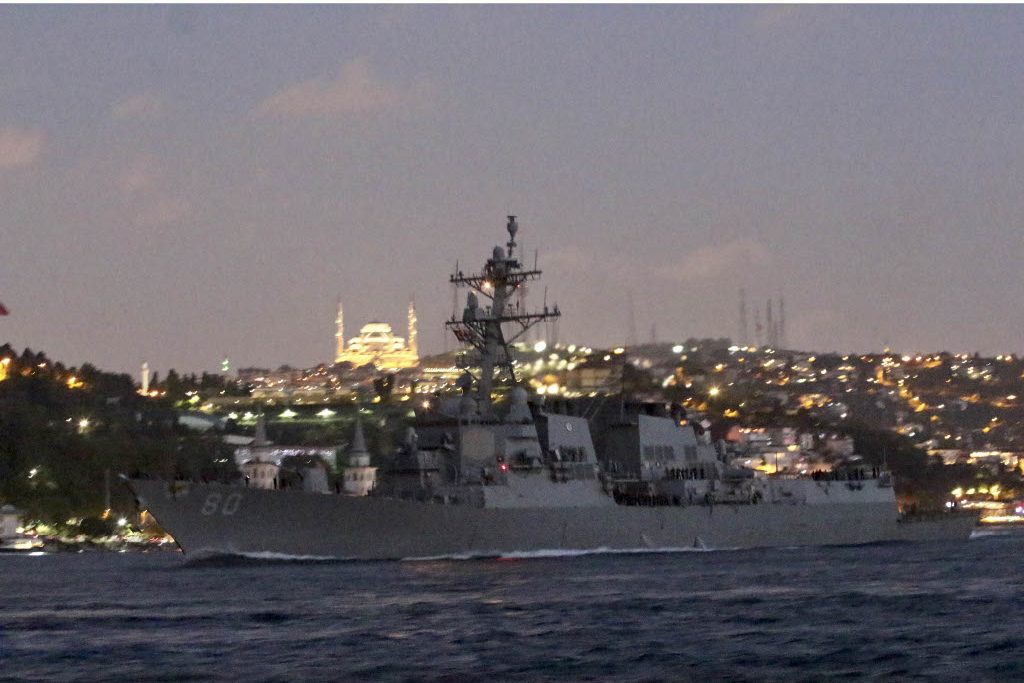 Destroyer USS Roosevelt (DDG-80) performed drills in the Black Sea with the Ukrainian navy on Tuesday, the U.S. Navy announced.

Ukraine’s Island-class cutter Starobilsk (P191) and the Gurza-M class (Project 58155) gunboats Nikopol (P176) and Kastopol (P180) participated in the exercise, according to a Navy press release. Starobilsk is a former U.S. Coast Guard cutter that was transported to Ukraine last year in an effort to bolster the Ukrainian Naval Forces, USNI News previously reported.

An MH-60R Seahawk helicopter attached to Roosevelt and Ukraine’s Mil MI-14 helicopter also joined for the Black Sea drills, according to the news release.

“Conducting exercises with our Ukrainian NATO partners demonstrates the combined strength and capacity that is always resident when our two nation’s navies come together. The U.S. – Ukraine partnership that has existed for decades has never been stronger,” Cmdr. Ryan Kendall, the commanding officer of Roosevelt, said in a statement.

“The Ukrainian Navy is a professional organization with a lot of capability and skillsets that challenge my team to operate at our peak proficiency, it was a true pleasure working with their naval team in the Black Sea,” he continued.

Roosevelt’s transit into the Black Sea for the exercise marks the sixth trip for a Navy vessel to the body of water this year, the service said.

“The passing exercise served as an opportunity for the U.S. and Ukrainian naval forces to refine ship handling and maneuvering capabilities,” the Navy said. “U.S. Navy vessels routinely conduct training with NATO Allies and partners in order to enhance collaboration and increase capacity in order to strengthen the regional maritime security.”

The U.S. Navy in July conducted the Sea Breeze 2020 exercise in the Black Sea with seven other nations, including Ukraine. Shortly before the exercise started, the Russian navy reportedly disclosed plans to perform snap drills in the Black Sea.

Speaking to reporters in the midst of the Sea Breeze exercise, a commanding officer of a U.S. destroyer participating in the drills said the service was on “higher alert” due to Russian activity in the waters.

“There’s definitely Russian presence up here. There hasn’t been any confrontation. Every interaction I’ve had with them has been safe and professional,” Cmdr. Craig Trent, the commanding officer of destroyer USS Porter (DDG-78), told reporters during a July 22 virtual roundtable.

“They’re definitely present. They’re definitely watching us,” he added. “We’re watching them. … If anything ever does become unsafe or unprofessional, that’s something that we’re ready to take action to make sure that we are safe.”