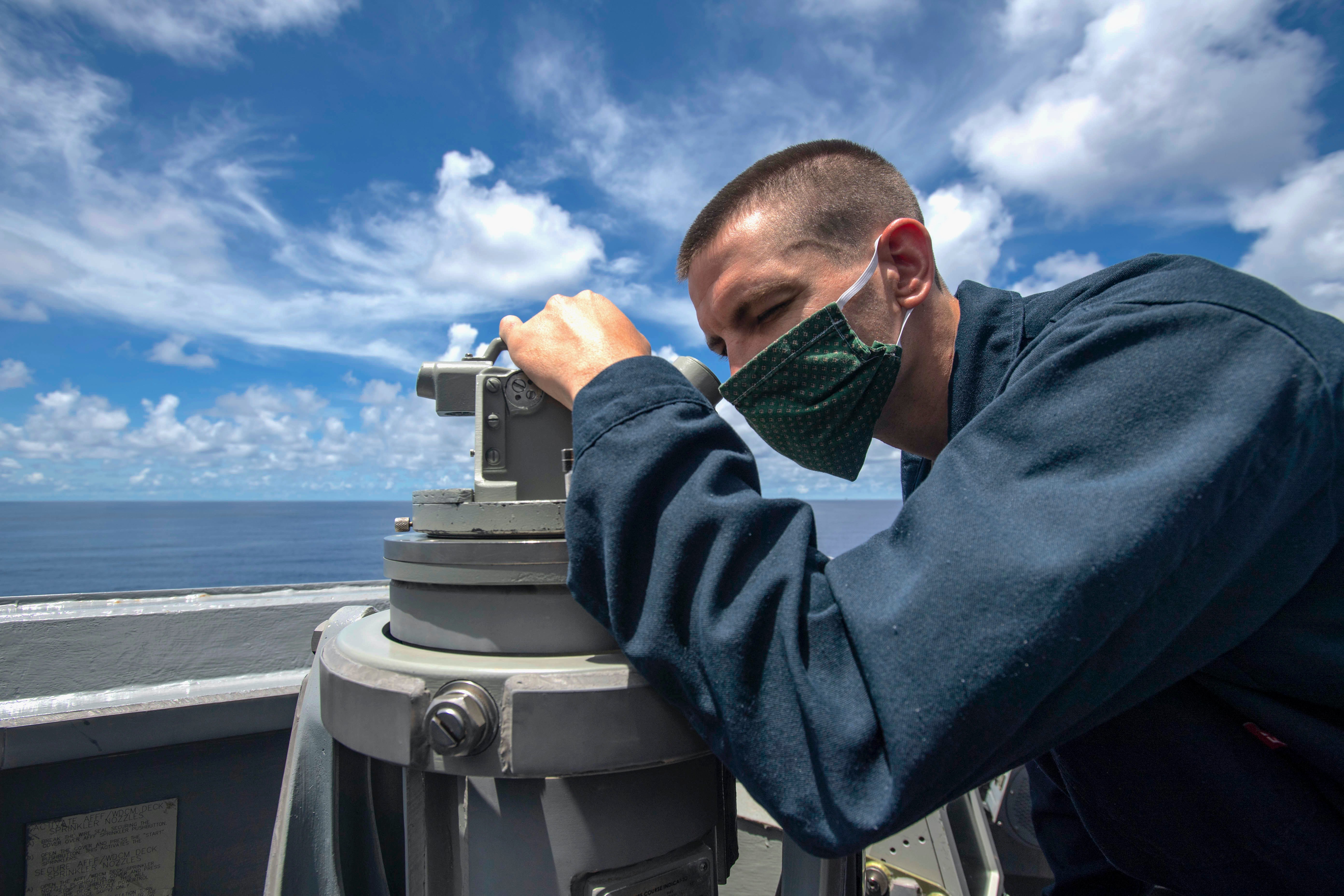 The U.S. will no longer remain on the sidelines when China uses “gangster tactics” to get its way in territorial disputes in the South China Sea, a senior State Department official said on Tuesday.

Speaking at an online forum at the Center for Strategic and International Studies, David Stilwell, assistant secretary of state for East Asia and the Pacific, said if Beijing continues to block Philippine access to fishing waters in Scarborough Shoal or militarize outcroppings there, the United States would regard those as “a dangerous move.”

Four years ago, an international arbitration panel ruled against China and said Scarborough Shoals belonged to the Philippines. Beijing ignored the ruling, calling it “a piece of paper,” Stilwell said.

In a statement Monday, Secretary of State Mike Pompeo said, “Beijing has failed to put forth a lawful, coherent maritime claim in the South China Sea.” He added that means Washington only accepts Beijing’s territorial claims to 12 nautical miles from its coast or natural islands it controls. The United States “will not let China claim the South China Sea as its own,” Stilwell said in his Zoom appearance.

China asserts it has territorial control of a wide swath of the South China Sea, bounded by what it calls the Nine-Dash Line and enforced by quasi-military installations built on artificial islands.

To back up the American insistence that China abide by existing law, “there are physical demonstrations of support,” Stilwell said, including naval freedom of navigation transits, presence patrols by carrier strike groups and strategic aircraft over-flights.

“This freedom of navigation operation upheld the rights, freedoms, and lawful uses of the sea recognized in international law by challenging the restrictions on innocent passage imposed by China, Vietnam and Taiwan,” reads a statement from the Navy.
“Unlawful and sweeping maritime claims in the South China Sea pose a serious threat to the freedom of the seas, including the freedoms of navigation and overflight, free trade and unimpeded commerce, and freedom of economic opportunity for South China Sea littoral nations.”

There is also the “gathering of the like-minded” in the Indo-Pacific and Europe to demonstrate “we’re making [the Chinese] words and deeds match,” Stilwell said during the event.

Unlike other nations in territorial disputes with China, the United States and the Philippines have a mutual defense treaty, which raises the stakes if there is a military confrontation.

Stilwell singled out the Association of Southeast Asian Nations (ASEAN) for “taking a more positive approach” in standing up to Chinese bullying and coercion and demanding Beijing comply with its code of conduct to resolve disputes peacefully.

“What we’re doing [in this statement and the actions being taken] is enforcing existing law,” he said. “This is housekeeping.”

Stilwell added, “I can’t see how they would take that in any other way” but as a response to China’s “doubling down on ‘might makes right.'”

Later in answer to another question, he said, “standing together will send a very clear message in Beijing” that “you just can’t sign papers and walk away.”

Although China’s claims that the Nine-Dash Line, encompassing most of the South China Sea, is historically its territory, the international Permanent Court of Arbitration dismissed China’s claims to outcroppings on Scarborough Shoal that the Philippines called its own in 2016. Using the U.N. Convention on the Law of the Sea as its guide, the court ruled Beijing had “no historical rights” to these islands and waters based on a Beijing map created in the 20th century during disputes with France and Great Britain.

Instead of complying with the unanimous ruling, Beijing moved aggressively in dredging sand to turn similar outcroppings into artificial islands that it has since militarized with airfields, ports and barracks to use as bases to bully the Philippines, Malaysia, Vietnam, Indonesia, Brunei and Taiwan.

Stilwell compared these actions to Great Britain’s East India Company in the era of colonialism. Beijing “stakes claims, coerces and controls.” Beijing often uses state-owned enterprises to dominate its neighbors and continue “its new imperial ways” globally, including through infrastructure and telecommunications projects.

The reclamation projects started two years before Philippine case ruling; but since then Beijing has used them “as bases for harassment” to threaten maritime commerce, others’ national fishing rights and their mineral exploration for economic development.

As well as a critical region of maritime commercial traffic, the South China Sea is potentially rich in oil and natural gas, which adds another dimension to the Beijing’s claims of sovereignty. In recent months, Chinese navy and coast guard vessels menaced Malaysia mineral exploration efforts in Malaysia’s own waters. The U.S. Navy countered with presence patrols. The Chinese also have used armed fishing vessels to disrupt Vietnamese mineral surveying and exploration work.

“These resources are the inheritance of these people and their children,” Stilwell said, referring to Vietnam, Malaysia and the Philippines.

China routinely warns American aircraft and naval vessels that they are violating its territory if they pass overhead or transit close-by waters. The U.S. Navy, as well as warships from France, the United Kingdom and other allies, routinely conducts freedom of navigation operations through the disputed territory.

Earlier Monday, China announced it was imposing sanctions on Sens. Marco Rubio (R-Fla.) and Ted Cruz (R-Texas), as well as Rep. Chris Smith, (R-N.J.) and Sam Brownback, ambassador-at-large for religious freedom. The move comes in response to new penalties the United States has imposed on Beijing for its treatment of the Muslim Uighur minority.