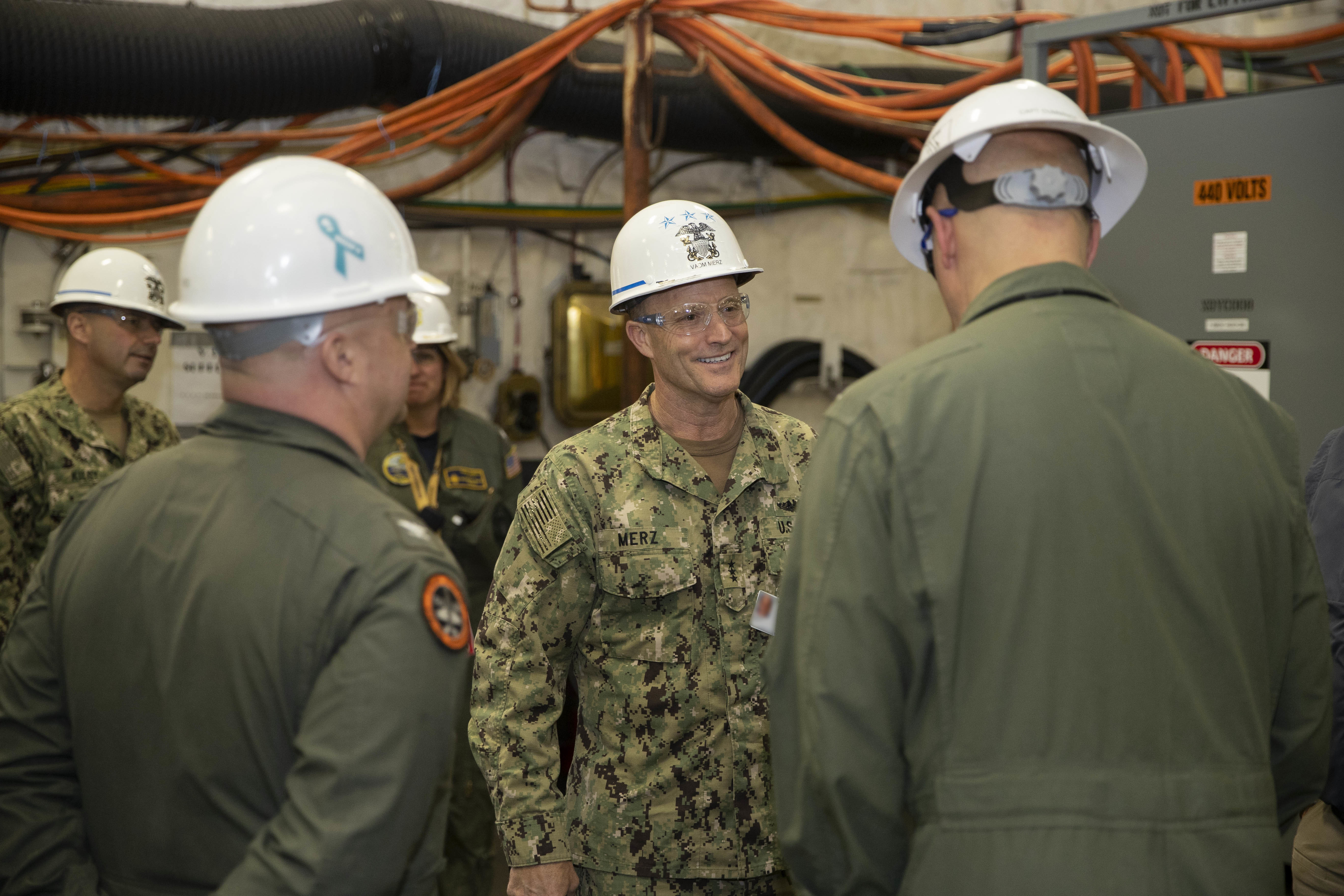 WASHINGTON, D.C. — The Navy believes it is almost out of the readiness hole it found itself in over the last few years, and budget requests going forward will be marked by an attempt to balance readiness, capability and capacity.

Whereas budgets earlier this decade prioritized shipbuilding at the expense of ship maintenance, and budgets in the last three or so years have focused on reversing the readiness crises that emerged in naval aviation and ship repair yards, “you’re going to see the Navy be very very defensive of protecting the balance … between readiness, capability and capacity,” Vice Adm. Bill Merz, the deputy chief of naval operations for warfare systems (OPNAV N9), said today at an event cohosted by the U.S. Naval Institute and the Center for Strategic and International Studies.

“The president’s budget that’s on the Hill now was the first budget we put up there where we’re starting to see the end of that pit that we have to fill in on the readiness side. And as we put together the president’s budget for [Fiscal Year 2021], I think you’ll see that the divot gets smaller and smaller and smaller as we start figuring out where this balance is going to be between capability and readiness. And we’re just fundamentally committed to that now,” he continued.

Merz noted the challenges that can arise when the Navy gets out of balance. In the 1990s the service placed less priority on capacity, buying fewer new ships in the decade – including just two Seawolf-class and two Virginia-class attack submarines during the entire decade.

“If you walk away from your industrial base, in the complex programs we’re dealing with today, it’s very hard to regenerate – in some cases, impossible to regenerate,” he said. “We now we see how difficult it is to ramp that production up when we have a clearly defined requirement to get bigger.”

During the beginning of sequestration and the subsequent years of tight budget caps, shipbuilding was prioritized to “just to try to keep some kind of industrial base heartbeat going here, and the bill-payer for that was the readiness of today’s fleet.”

With both instances of getting out of balance creating lasting impacts on the industrial base and on readiness that the service is still coping with today, Merz said the Navy is on a “crusade to get this balance right” and that Congress has proven to be a good partner in achieving this balance.

Though Congress has shown a tendency to add ships and aircraft to the Navy’s budget beyond the service’s request while often using operations and maintenance dollars to help pay the bill, Merz said the Navy and lawmakers are on the same page now about how that can throw off the balance of the fleet. Construction costs are only about 30 percent of a ship’s total lifetime cost, he said, with the other 70 percent being maintenance and modernization over the life of the ship.

“So when we get a ship that we didn’t ask for or is above the requirement, we build it, we lob it over the fence into the readiness accounts, and it adds to that burden,” Merz told USNI News during a question and answer session at the event.
“Probably the most positive outcome of all the dialogue we’ve had on this readiness challenge and getting, as we say, the pot right here between readiness and capability, was a direction of Congress this year to add [a 30-year ship maintenance plan]. What is it really going to cost to own and operate a 355-ship navy, plus all the other ships we buy to support that navy?”

Merz said the process of creating that long-range plan, which supplemented the annual 30-year shipbuilding plan as an addendum to the budget request, was revealing in that the Navy didn’t even understand its own cost projections as the fleet grows, and therefore maintenance, personnel, training and other costs increase too.

“We’ve been shrinking the Navy for the past 40 years instead of growing it, so we don’t even have the complex modeling to really understand what all these costs are going to materialize to 20 years down the road. Neither does the Congressional Budget Office or anyone else because we’ve just kind of gotten into this mode where it’ll take care of itself because we’re going to be smaller when we get there,” Merz said.
“So we’ve been working very hard with all the external organizations so we can converge on a model so we can at least use a common base to predict what this cost is going to be.”

Merz made clear that balancing readiness with growth to or beyond a 355-ship fleet will be vital in the coming years, he said, citing “very stark evidence that when you fall out of balance, people get hurt. And as you try to burn the candle at three different ends, something, one of those flames is going to go out, effectively. So when we talk about the balance of readiness, capability and capacity, it’s kind of a multiplication equation: if any of those go to zero, the whole equation goes to zero. And that’s kind of a dramatic example, but we were certainly showing signs of heading that direction. We have been able to effectively, we think, turn those curves. The investments we’ve put in readiness over the last three years are just starting to materialize into report-backs, output metrics that are really making a difference. Just look at our Hornet fleet and how much better it’s doing.”

Still, sometimes lost in the talk of balancing readiness and capacity is the third leg of the triad: capability. The Navy has successfully funded some new capability in the form of longer-range weapons, laser weapons and multi-mission upgrades to existing single-mission missiles, such as the maritime Tomahawk program. The service has discussed plans to upgrade ship capabilities such as improving the radars on Flight II destroyers and upgrading the command and control system on amphibious assault ships, but it remains unclear when and to what degree those capability improvements will be funded. Additionally, when the Navy took a swing at a major investment in new capability – billions of dollars planned for unmanned vehicles in all domains, with an emphasis on new medium and large unmanned surface vehicles – lawmakers almost immediately rejected the plan, which would have been paid for by canceling the refueling of an aircraft carrier to free up the funds for unmanned vehicle experimentation and acquisition.