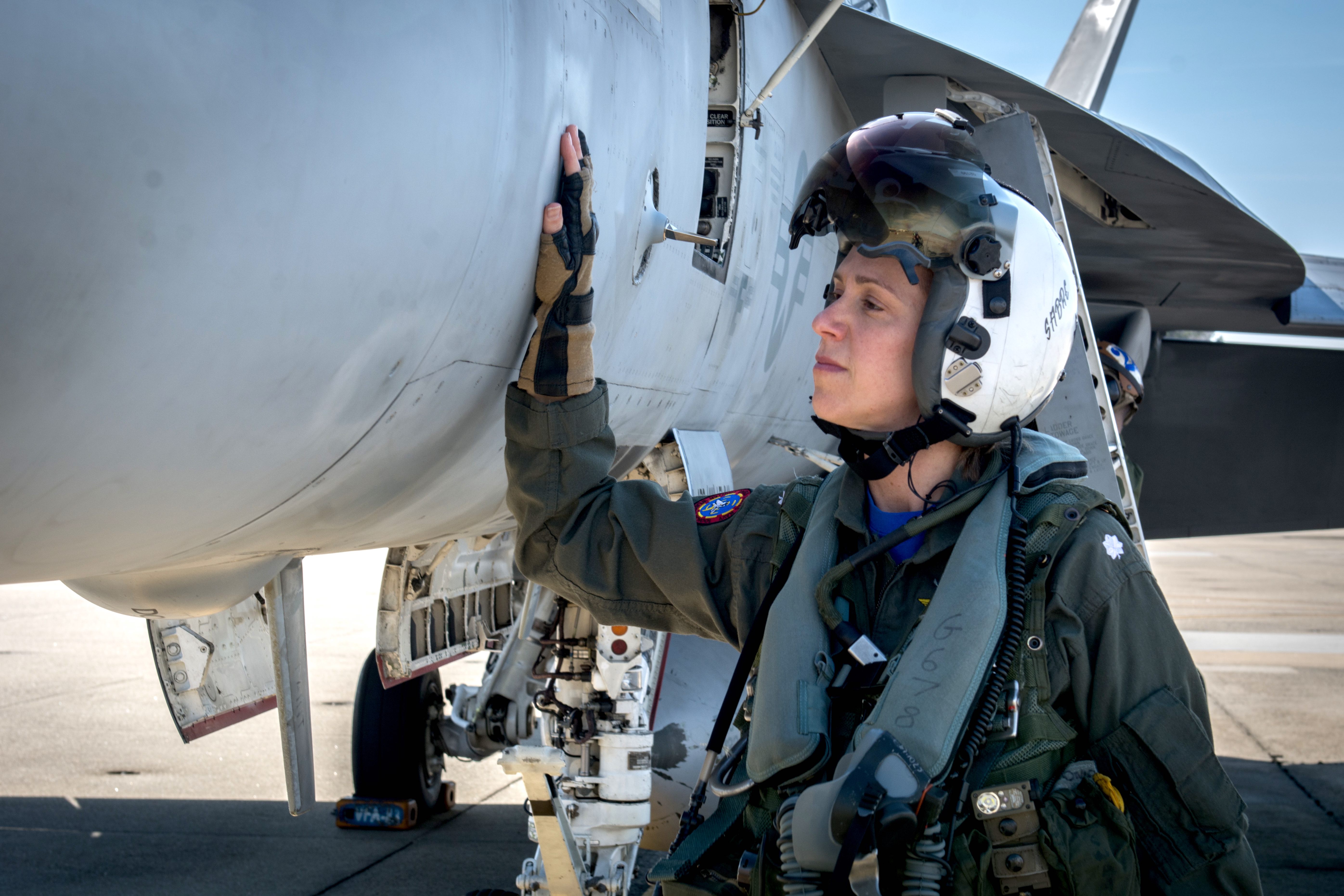 Cmdr. Leslie Mintz, executive officer of the “Blacklions” of Strike Fighter Squadron (VFA) 213, inspects an F/A-18F Super Hornet prior to her flight on board Naval Air Station Oceana, Va.. US Navy Photo

CAPITOL HILL – The Navy now boasts its Super Hornet fleet is routinely 63 to 75 percent mission capable, a significant jump from the fall when the Navy struggled to keep half of its F-18s ready to fly.

In September, then-Secretary of Defense Jim Mattis issued a memo to the service secretaries mandating “a minimum of 80 percent mission capability rates for our FY 2019 Navy and Air Force F-35, F-22, F-16 and F-18 inventories — assets that form the backbone of our tactical air power — and reducing these platforms’ operating and maintenance costs every year, starting in FY 2019.

At the time, on any given day close to 50 percent of the Navy’s Super Hornet strike fighters were not mission capable. Responding to the Mattis memo, the Navy invited industry leaders to evaluate its process for maintaining Super Hornets and delivering replacement parts, Rear Adm. Scott Conn, the Navy’s director of air warfare, said during a Thursday hearing before the House Armed Services tactical air and land forces subcommittee.

“We reduced planned maintenance for Super Hornets from 120 to 60 days,” Conn said.

The Navy received help from logistics specialists from airlines, including Southwest, Secretary of the Navy Richard V. Spencer said at an event last year.

For example, Spencer said, the Navy shaved weeks off the time it takes to replace rudder actuators on F-18s. The Navy completely overhauled the part’s logistics system, and staff training improved. What took more than a month to ship is now sent to maintainers in about two days.

“It’s a critical part and it’s one of the reasons I had such horrible availability with the F-18,” Spencer said in December.

The Navy also reduced the amount of time it takes to inspect fighters after repairs. Now Super Hornets are back flying in a week, and in many cases within four days, Conn said during Thursday’s hearing. The Navy invested in bringing artisans on board to work on Super Hornets, and Conn said they changed the culture. Repairs are scheduled and completed on a predictable schedule, in a way Conn likened to doctors in an operating room. The goal is to get the fighters operational within three days of maintenance.

Even before the Mattis memo, the Navy and Marine Corps had taken steps to improve their strike fighter readiness. In addition to pouring funding into spare parts, engineering support, depot maintenance and other readiness-related funding accounts, the sea services also looked into other barriers to readiness. Navy and Marine Corps officials detailed for lawmakers their strategy for reducing Class C mishaps, which involve damage to aircraft or a non-fatal injury, that were frequently occurring during repair work or while towing aircraft, Rear Adm. Roy Kelley, commander of Naval Air Forces Atlantic, told lawmakers during a June 2018 hearing.

However, even with such gains, lawmakers remain concerned the Navy is still taking risks in the way it manages strike fighter readiness, Rep. Vicky Hartzler (R-Mo.), the ranking member of the House Armed Services subcommittee on tactical air and land forces, said in her opening statement Thursday.

“[The Navy] has an identified shortfall of 54 aircraft, which amounts to one carrier air wing,” Hartzler said. “We need to better understand what impacts this has to overall readiness and what we can we do to improve the situation from a modernization standpoint,” Hartzler said.

The F-35 Lightning II Joint Strike Fighter program – which the Navy and Marine Corps are still in the early stages of incorporating into the fleet – has a high readiness rate for all three fighter variants, Vice Adm. Mat Winter, the F-35 program executive officer, said during Thursday’s hearing.

“We’re on a trajectory to reach 80-percent capability by the end of the year,” Winter said.

When F-35 squadrons deploy, Winter said they now bring spare parts packages with them. With those packages, Winter said, “those mission capability rates average between 65 and 85 percent.”

Winter’s office has worked with to suppliers to build up spare part inventories at depots and on the flight line, Winter said. Now maintainers have the right parts on hand, so they don’t have to keep going back to the manufacturer to order more parts. The F-35 program is doing a better job of keeping maintainers stocked with parts such as canopies, blade shields and wingtips. And when possible, Winter said, flight line maintainers now have the authority to fix parts.

“We can get spare parts to maintainers one of two ways – get new parts to flight lines, but also giving the authorities for maintainers to fix parts on the flight line,” Winter said.

Plus, as the program has matured and is nearing full-rate production, Winter said the production line ironed out many of the problems that caused the first F-35s to require more maintenance.

“The aircraft itself, lot over lot over lot, is getting more reliable,” Winter said. “Therefore, it doesn’t break as often, so therefore it’s more ready.”