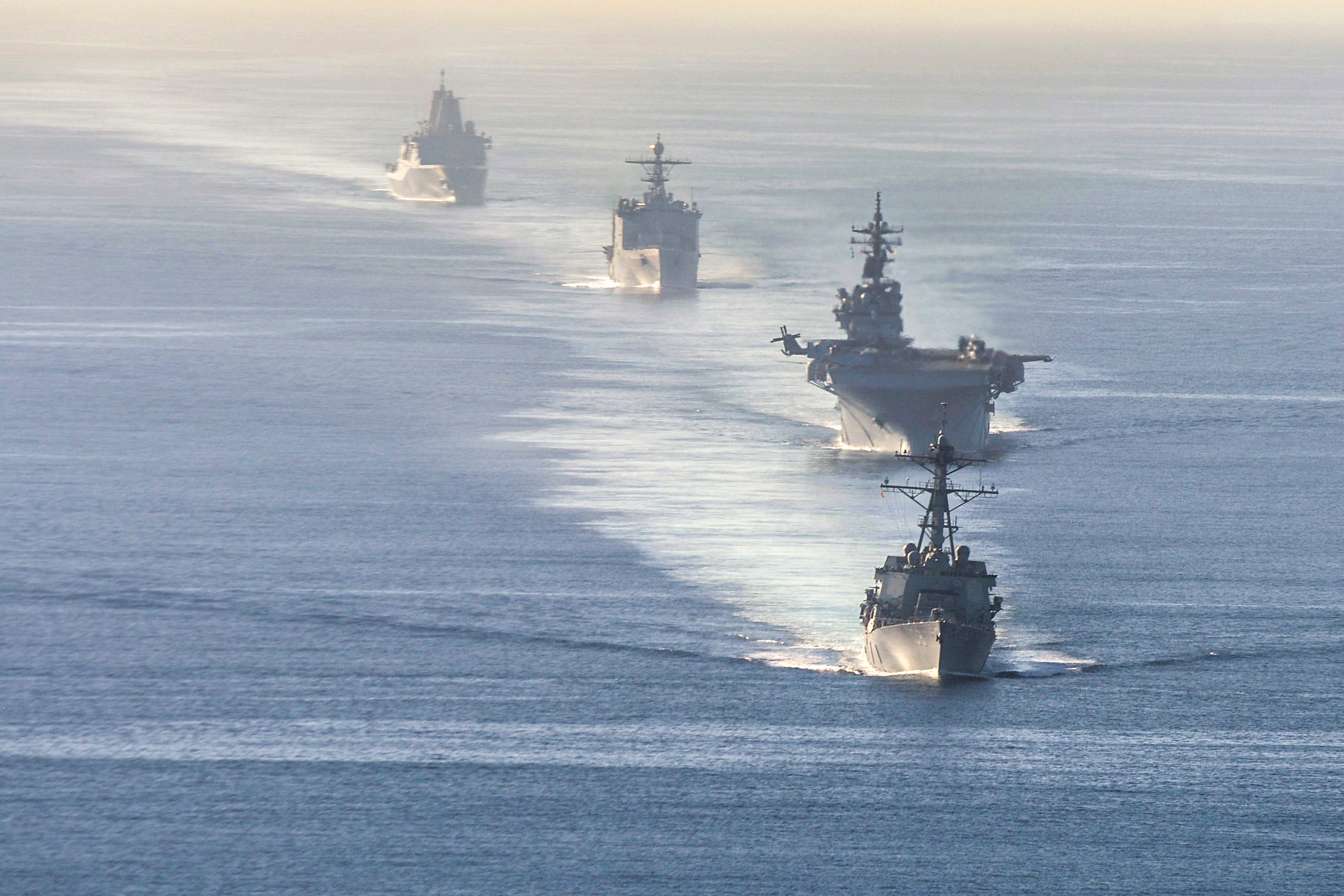 WASHINGTON, D.C. — The amphibious force may get a massive capability overhaul, if a plan by the Expeditionary Warfare Directorate (OPNAV N95) to increase lethality and survivability of amphibious ships is accepted by Navy and Marine Corps leadership.

Maj. Gen. David Coffman said his directorate will spend 2019 working out the finer details of an Amphibious Warship Evolution Plan, which will help the amphibious assault ships better leverage fifth-generation aircraft and will put the smaller amphibious transport San Antonio-class (LPD-17) docks more on par with cruisers and destroyers as “prominent middle-weight fighters” in a future naval battle.

“It’s multiplication, not addition – so if you have a zero in any one of these categories, you end up with a big fat nothing,” he said, while speaking at a Hudson Institute on Nov. 9. 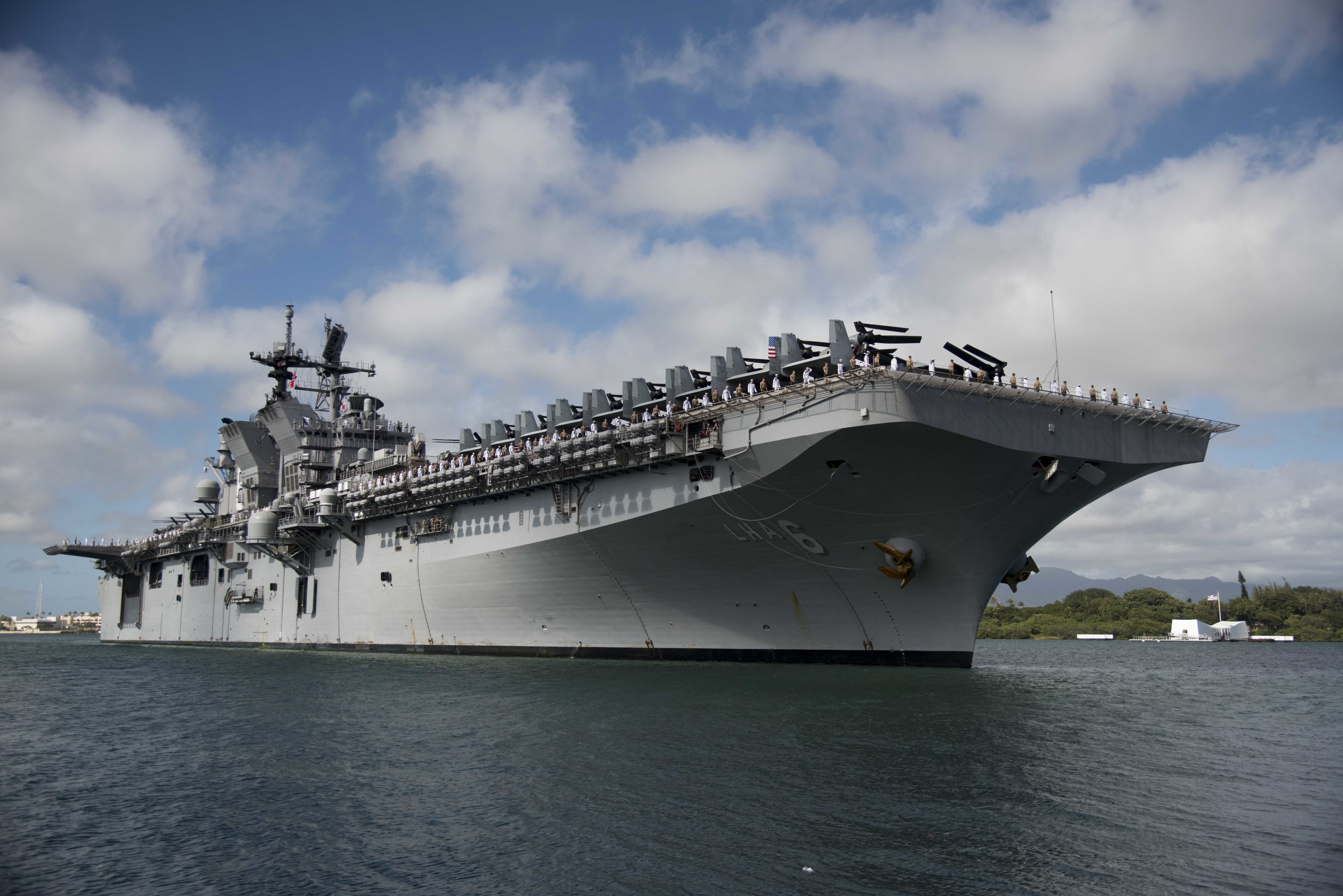 The amphibious assault ship USS America (LHA 6) and its amphibious ready group (ARG) are moored at Joint Base Pearl Harbor-Hickam. US Navy photo.

On the capacity side, the Navy and Marine Corps are executing a plan to get to 38 amphibious ships – ultimately 12 big decks and 26 LPDs – which represents a compromise figure that could carry two Marine Expeditionary Brigades ashore. Coffman said it would take 50 or more ships to fully meet operational commanders’ appetite.

On the capability side, “if you have a ship but it can’t stand in or is not equipped for great power competition, or it can’t operate in the five-domain contested environment for current and future warfights, well, that’s a zero.” 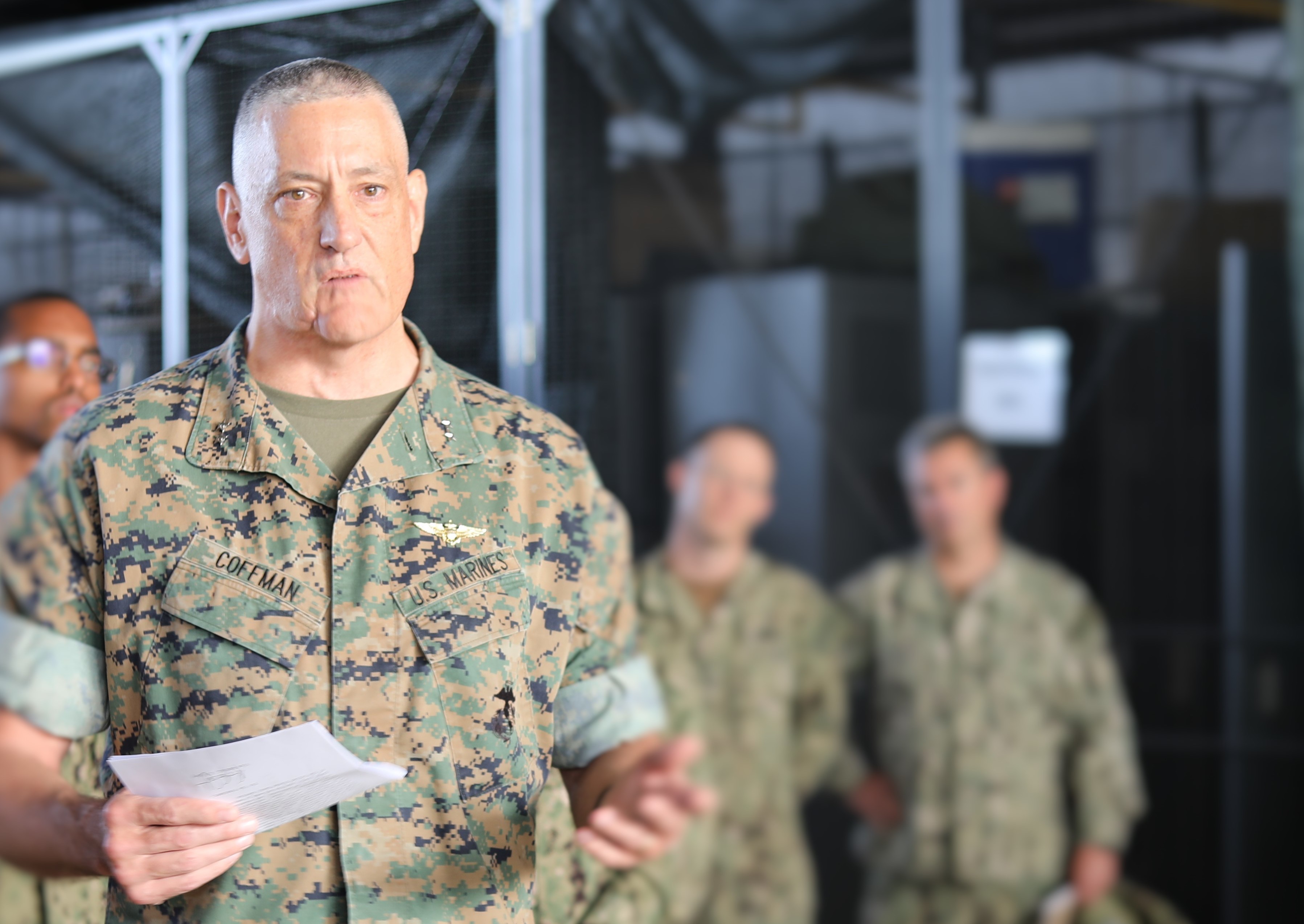 And on readiness, “if you have the ship and you give it the right combat systems and you built a capable amphibious warship – not just a sealift carrier to move square foot, cubic foot and Marines – but it’s sitting up on blocks at a yard … guess what you get when the war starts? That’s right, a zero.”

He called the difficulties of getting amphibs through maintenance periods on time and on budget “a sucking chest wound” that affects readiness, but that side of the equation is largely out of his control. On the capacity side, he said he can recommend procurement profiles up the chain of command, but there is a lot of pressure on the shipbuilding budget and ultimately the decision is not in his hands either.

But he can dictate the capability requirements, which is why he said his staff’s main focus in 2019 would be this capability evolution plan. The plan will address hull, mechanical and electrical capabilities; susceptibility, survivability and recovery; offensive lethality; and integration with both Special Operations Forces and the Marine Air-Ground Task Force, particularly the aviation combat element and its F-35B Joint Strike Fighters. 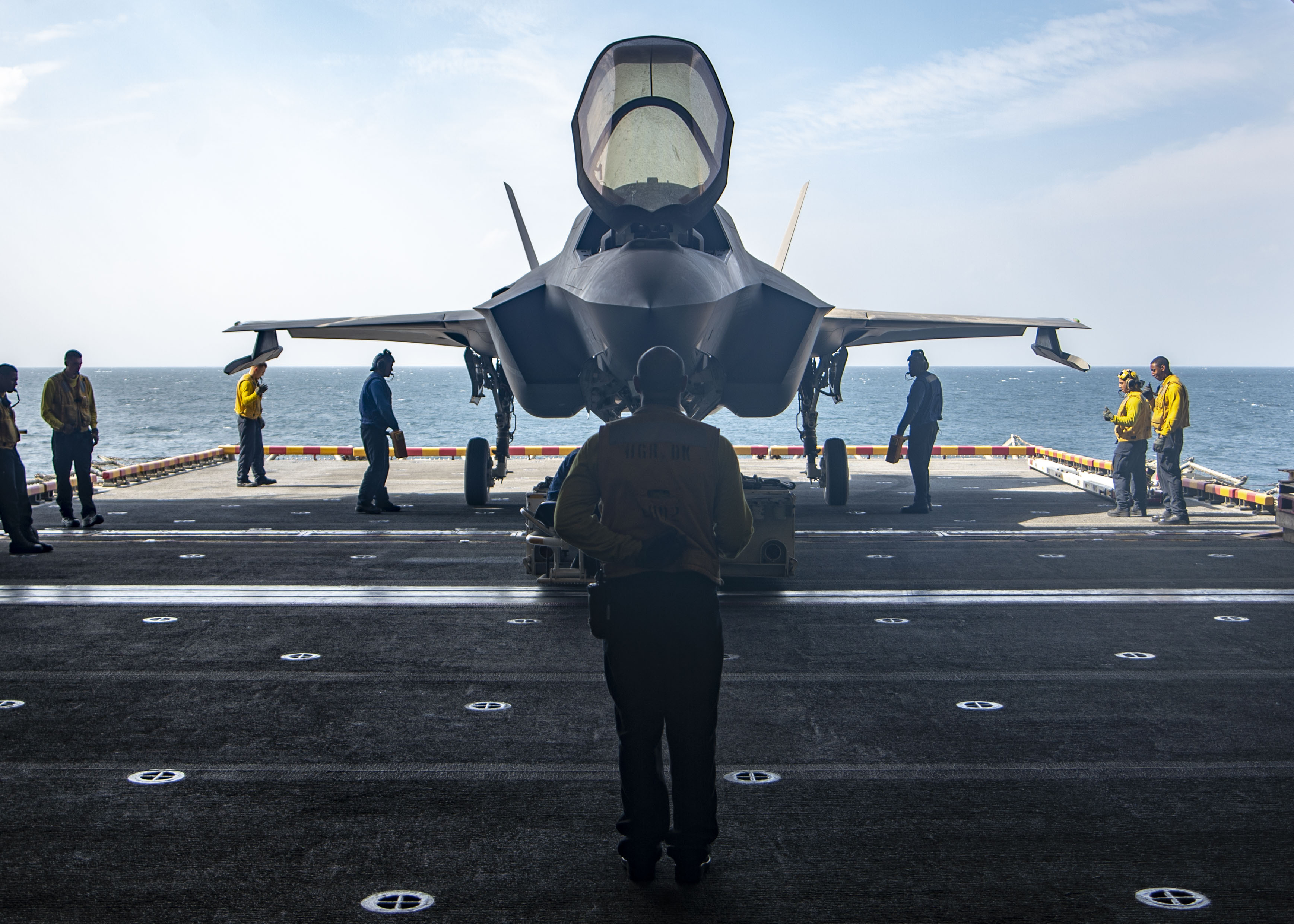 On the amphibious assault ships, Coffman proposed a massive midlife maintenance period, akin to aircraft carriers’ four-year refueling and complex overhaul, in which the whole Navy-Marine Corps team knows the ship will be out of service for a time but will come out of the yard as the most sophisticated ship in the fleet.

Particularly given that the Navy only has nine Wasp-class LHDs and America-class LHAs in the water today, Coffman acknowledged the difficulty in asking to take one out of service. But, he said, the first operations of the F-35B on USS Wasp (LHD-1) and USS Essex (LHD-2) this year have been “a reverse canary in a coal mine” situation in plainly highlighting a problem the Navy and Marine Corps already expected to face: the planes are too sophisticated for the ships, which cannot fully communicate with them and leverage the planes’ data.

“I don’t want to bring Marine Aviation down to third- and fourth-gen; I want to bring the rest of the Marine Air-Ground Task Force up to fifth-gen and exploit that technical expertise and have a fifth-gen MAGTF. The problem is, we’re having to embark a fifth-gen MAGTF on a third-gen ship, and we have to fix that. Time, now,” Coffman said.

On the San Antonio-clas LPDs, the focus of upgrades will be bringing them from Marine-carriers with a great command and control system to a lethal node in the Navy’s sea control web. 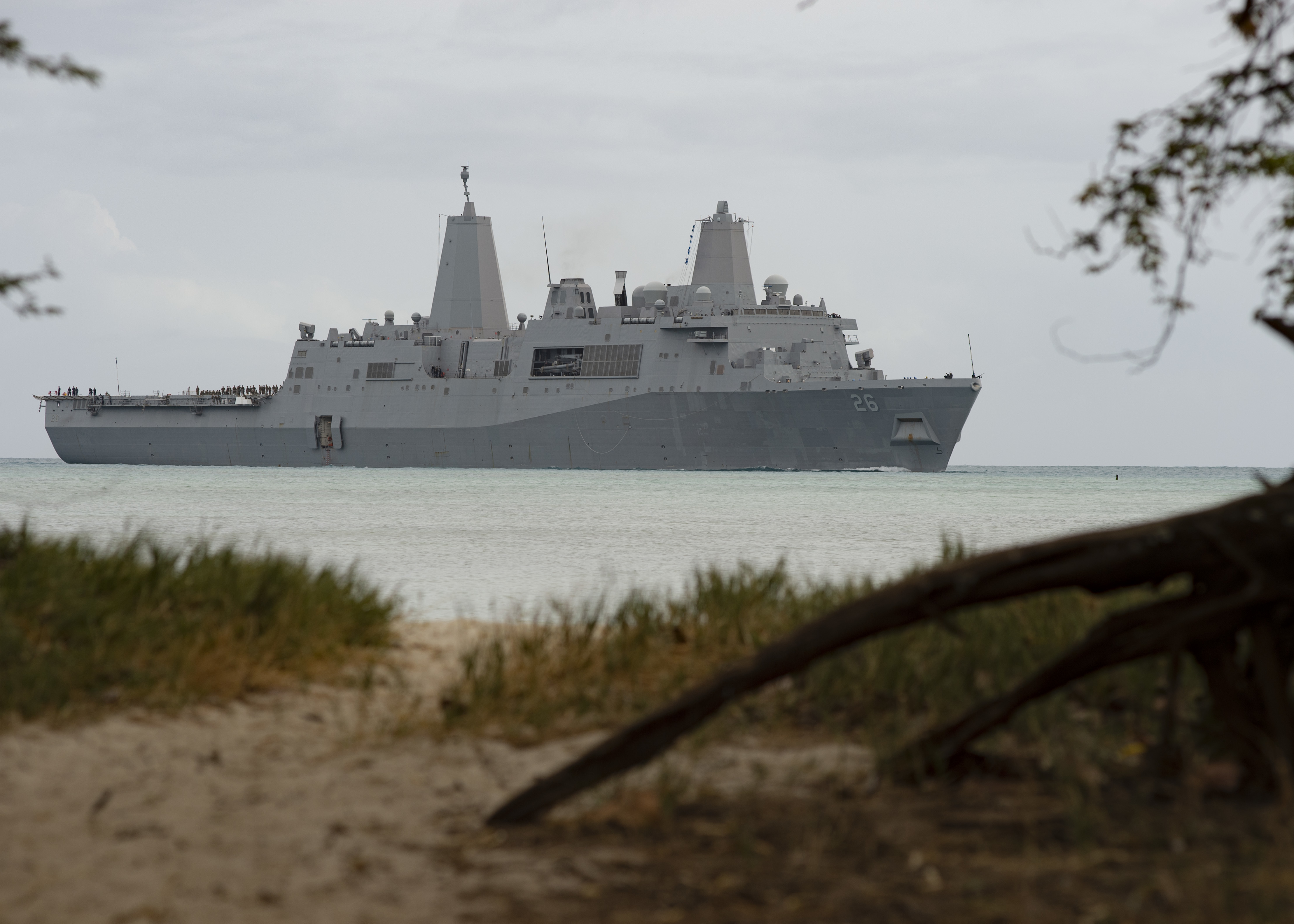 Coffman said that wargames and tabletop exercises have shown the LPD is just the right size to be highly effective in the Navy’s distributed lethality and distributed maritime operations concepts, if they were upgraded to include more lethal systems. He said “they really live in the world of the small boys” in terms of size, aviation detachment and other capabilities, but they are not tapped into the Navy’s kill web in the same way – a lost opportunity that Coffman intends to correct in this new upgrade plan.

“Making a bet on increased lethality … is absolutely essential” and worth the cost, he argued. He declined to say what weapon systems he was looking at putting on these amphibs, but he said the upgrades would allow the amphibs to join the rest of the black shoe navy in the fight for sea control once they put their MAGTF ashore.

The general described a scenario of multiple LPDs fighting alongside cruisers and destroyers, and not only would the amphibs have a complement of sensors and weapons to contribute to the sea and air control fight, but they would also have a surprise mix of aircraft and surface connectors hidden in their well decks and flight decks to surprise an adversary closer in to shore.

The LPD midlife plan would ideally kick in in the mid-2020s, he said, and give the Navy and Marines a chance to “correct the failures of the past” with this ship class now that the amphibious community has learned so much about how the ships can be used and what investments are most desired.

As Coffman and N95 fill in the details of this plan, Coffman said the community is hoping to change the conversation about what role amphibious ships can play in a future high-end battle. Currently, he said, “they’re not valued, they’re not lethal. If you make them more lethal – well I don’t want to make them more lethal because they’re not valued. So you get caught in a circular argument. Our keywords we put on our poster … we say, lethal, survivable, networked and unpredictable,” he said, and he hopes that a plan to get the ships to those four ideals will capture leadership attention and funding.

Coffman put the cost and operational utility in plain terms. On cost, he said the amphibious force in the N95 portfolio only costs a nickel of every dollar the Navy spends and has proven well worth the money. On usefulness, he said in a major fight the largest Combined Force Maritime Component Commander – U.S. Pacific Fleet – would have at its disposal 100,000 Marines, including I and III Marine Expeditionary Forces and their accompanying 1st and 3rd Marine Aircraft Wing with their F-35s – but PACFLT could only benefit from all that “if he can talk to them, if he knows how to use them, if we have integrated the fifth-generation Marine Air-Ground Task Force capability resident in the fleet marine force.”

On the capacity side, Coffman said nine LHAs and LHDs are in the water; the tenth, the future Tripoli (LHA-7), will deliver next year; and the 11th, the future Bougainville (LHA-8) is under construction.

“We are debating out to the right of that because, facing the first planned decommissioning in 2029 of Wasp, the first of the Wasp class, we are concerned that the pathway does not get us to 12. We have a capacity problem with the big decks,” he said. 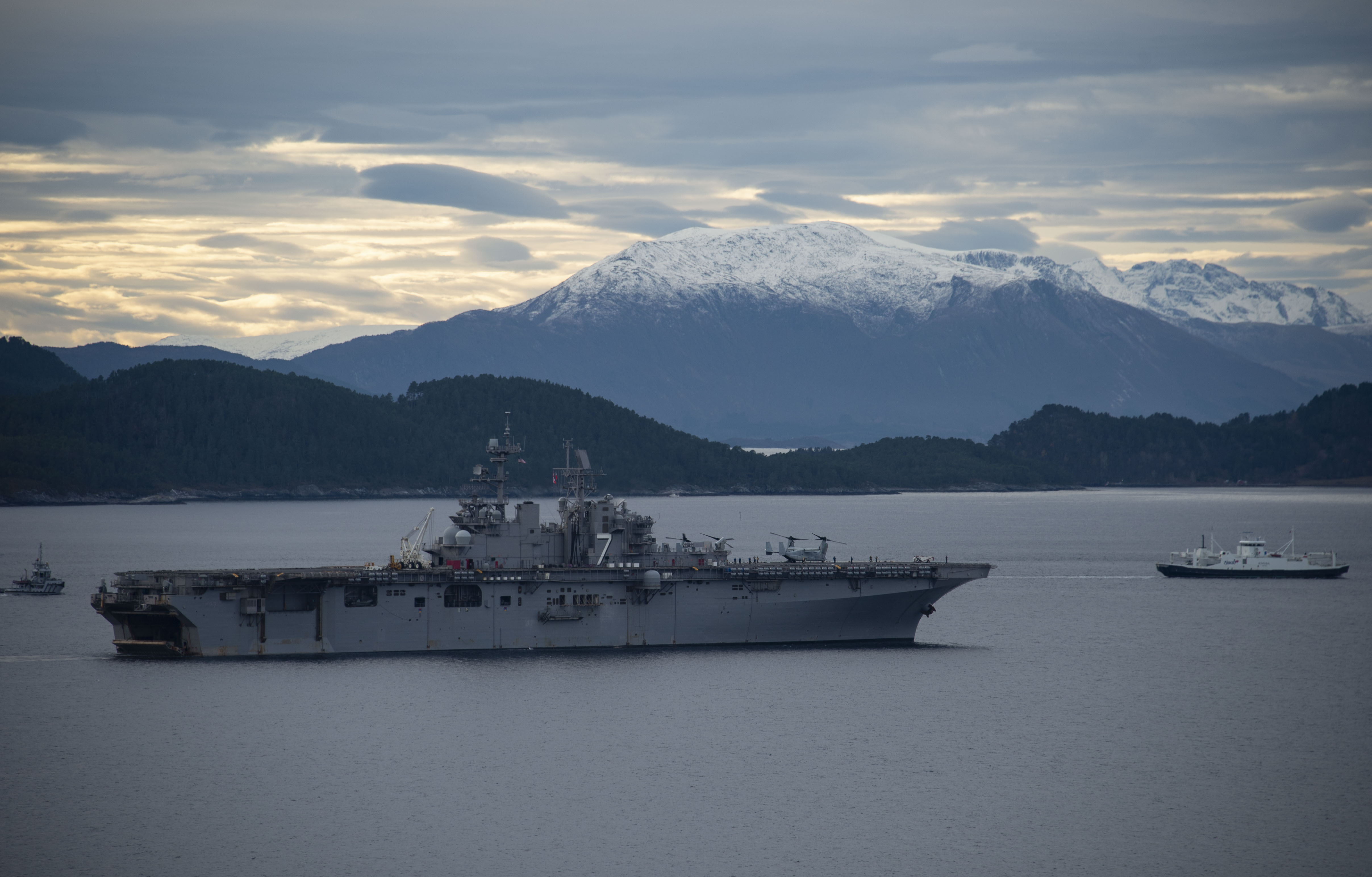 Coffman has also recommended to Navy and Marine Corps leadership that they enter into LPD Flight II serial production through a block buy or multiyear procurement as soon as possible. The Navy decided in 2015 to replace the aging Whidbey Island-class dock landing ships (LSD-41/49) with a next flight of LPDs and in April formally designated them LPD Flight IIs, which Coffman called the most consequential decision for the amphib force in recent history and “a monumentally good decision for the Navy and the nation.” The current shipbuilding plan calls for the first ship in 2020 and then one a year starting in 2022, but Coffman is advocating for more.

“We do have industrial capacity to build, to include serial production on LPD at the rate of one per year. So we could build faster to our 38 ships if we accelerated LHA procurement and build and went to serial production soonest on LPD and get a better pathway there,” he said.
“Again, that’s our recommendation, but that’s weighed against other parts of the DoD.”