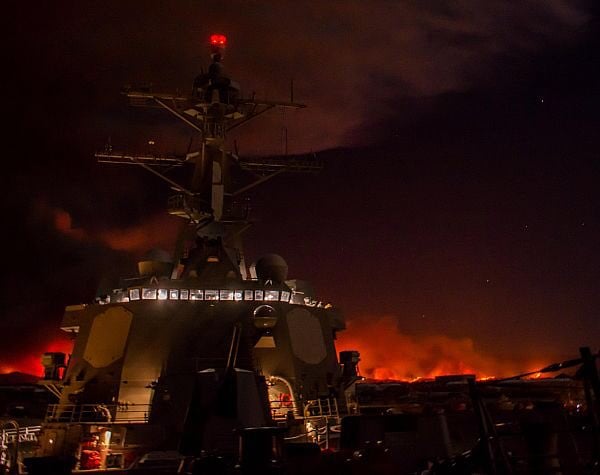 USS Sterett (DDG-104) is pierside at Naval Base Ventura County in 2017. US Navy Photo

Though the new warship is not meant to directly replace either the Ticonderoga-class cruisers or the Arleigh Burke-class destroyers, the original timing would have allowed the Navy to stop its Arleigh Burke DDG production at the end of the current multiyear contract in 2022 and then move into the new Large Surface Combatant hull in 2023.

However, this week’s FY 2020 budget request – which projects out shipbuilding programs through FY 2024 – makes no mention of Large Surface Combatant acquisition and continues the DDG production line throughout the entire five-year period instead of stopping at the end of the current contract.

Ron O’Rourke, the Congressional Research Service’s naval affairs specialist, told USNI News that “my understanding from the Navy is that the lead ship of that (Large Surface Combatant) class is currently scheduled for FY25, which is why it doesn’t show in the FYDP; that the Navy is looking into whether that date can be accelerated; and that if it can, a future budget submission might show the ship in an earlier fiscal year. But for the time being—for the FY20 budget submission—it is an FY25 ship.”

Two other sources familiar with the Large Surface Combatant effort confirmed to USNI News that the Navy had pushed the program back from 2023 to 2025.

USNI News reported earlier this week that the Large Surface Combatant program had been delayed in the budget and that the new timing of the program start was unclear. The delay comes as the Navy looks to allow its cruiser force to retire on schedule instead of modernizing them and extending their service lives. The Navy has made this request before and Congress has pushed back, forcing them to keep the life-extension program on the books; it is unclear how this year’s request to allow the cruisers to retire in the near term will be received by lawmakers.

“The FY 2020 budget requests $447 million to accelerate the unmanned surface vehicle/vessel (USV) portion of the Navy’s Future Surface Combatant (FSC) strategy,” according to Navy budget documents.
“The increase in funding from FY 2019 to FY 2020 includes $24 million for medium and $373 million for large USVs, leading to the transition of USV prototypes and associated payloads from [Research, Development, Test and Evaluation] to procurement beginning in FY 2021.”

The requirements for the medium and large USVs, as well as the Large Surface Combatant, still remain somewhat undefined. The Navy has adopted a new Requirements Evaluation Team approach to rapidly working with industry, requirements officials, engineers and contracting officers to develop requirements that keep costs down and allow for industry to leverage today’s technologies rather than grasping for future capabilities that may be costly or timely to develop. Through the RET process, the frigate requirements were refined in short order and allow for a FY 2020 start to that program. Surface navy officials had said the same RET process would be applied to the Large Surface Combatant, though they admitted a 2023 start – a date laid out in Chief of Naval Operations Adm. John Richardson’s Design for Maintaining Maritime Superiority 2.0 document and a Surface Combatant Capability Evolution Plan – was an aggressive timeline for a major warship program.

Still, despite this two-year delay in the start of the program, Chief of Naval Operations Adm. John Richardson argued the ongoing need for a large manned surface ship of some kind to supplement the fleet of unmanned vessels and other futuristic weapons the Navy is heavily investing in in this year’s budget.

“I’ve got to tell you, given the discussion that’s happened already, first question that we have to do is prove to ourselves that we need a large surface combatant. What is the unique contribution of something like that in the face of all these emerging technologies?” Richardson said while speaking to reporters after a speech at the annual McAleese Defense Programs event.
“Right now the discussions point to the fact that it brings a unique capability in terms of house larger types of weapons, larger missiles; you certainly get more aperture on a bigger sensor; those sorts of things.”