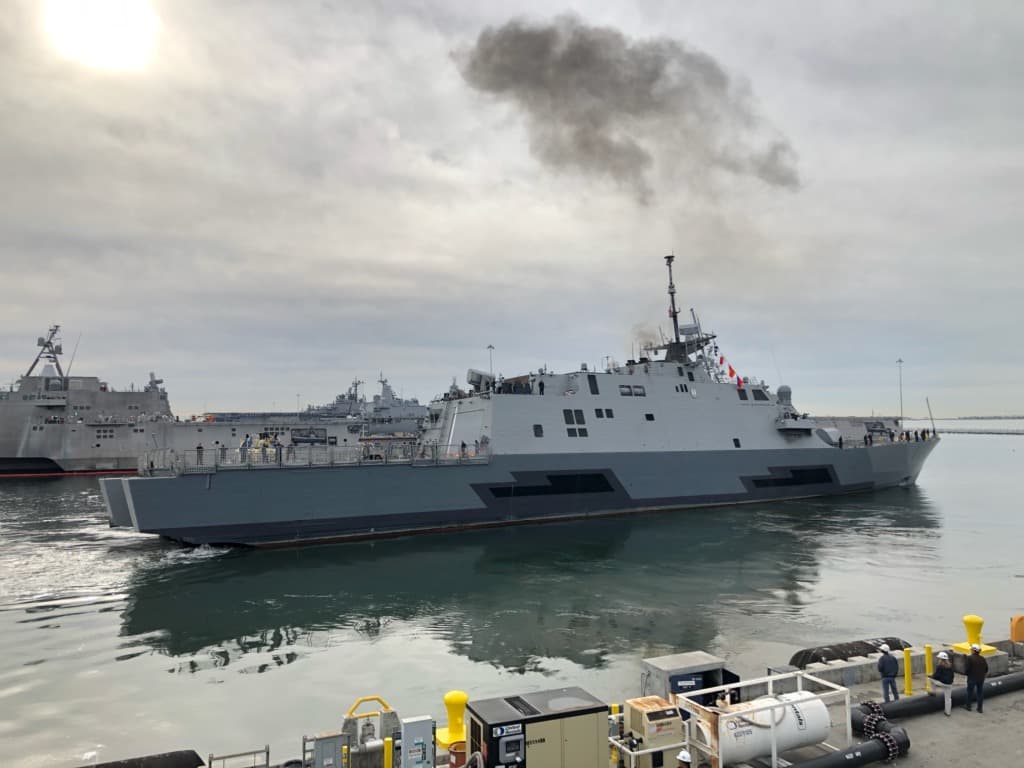 Littoral Combat Ship USS Freedom (LCS-1) left a pier in San Diego, Calif., for the first time in more than two years, after an extensive repair period to fix the ship’s propulsion system.

The underway was part of contractor trials to test repairs after a Colt-Pielstick diesel engine was damaged in 2016, a Navy spokesperson told USNI News on Monday.

“The Freedom-variant littoral combat ship USS Freedom (LCS-1) achieved a major milestone this week as the ship began contractor sea trials, Dec. 10,” LCS Squadron 1 spokeswoman Lt. Cmdr. Miranda Williams told USNI News.
“This important step is the culmination of nearly two years’ worth of work across multiple organizations. This milestone allows the first ship of its class to return to sea and fulfill its new role as a testing ship.”

In 2016, the crew of the ship discovered one of its two Colt-Pielstick diesels had failed due to contamination of the ship’s lube oil system by seawater.

After participating in the Rim of the Pacific 2016 exercise operating on its gas turbines, the ship returned to its homeport in San Diego. Once pier-side, a Southwest Regional Maintenance Center’s Diesel Engine Inspector found “significant damage to the engine caused by rust and seawater,” USNI News reported at the time. Since then, the ship has been undergoing repairs in San Diego. The first word on the successful repairs came from the ship’s Facebook page last week.

With the repairs to the ship completed, Freedom is now on its way to rejoin the four-ship LCS test force. The other Freedom-class ship in the test division, USS Fort Worth (LCS-3), was also sidelined after operator error damaged the combining gear that linked the ship’s main propulsion diesels with the Rolls Royce MT30 gas turbines in Singapore in 2016.

Questions on the status of both Freedom and Fort Worth left with a Naval Sea Systems Command spokesperson on Monday were not immediately returned.

In contrast to the two-years NAVSEA took to repair the two ships, the command was able to replace a damaged MT30 gas turbine on Zumwalt-class Michael Monsoor (DDG-1001) in a matter of months.

The inclusion of Freedom and Fort Worth back into the testing regime will free up operational assets that were waylaid to complete testing of the emerging mission package capabilities. Due in part to the demands of mission package testing, the Navy did not deploy any Littoral Combat Ships in 2018.

For example, USS Milwaukee (LCS-5) was used as a platform for Surface-to-Surface Missile Module (SSMM) developmental testing that will integrate the AGM-114L Longbow Hellfire onto the LCS.