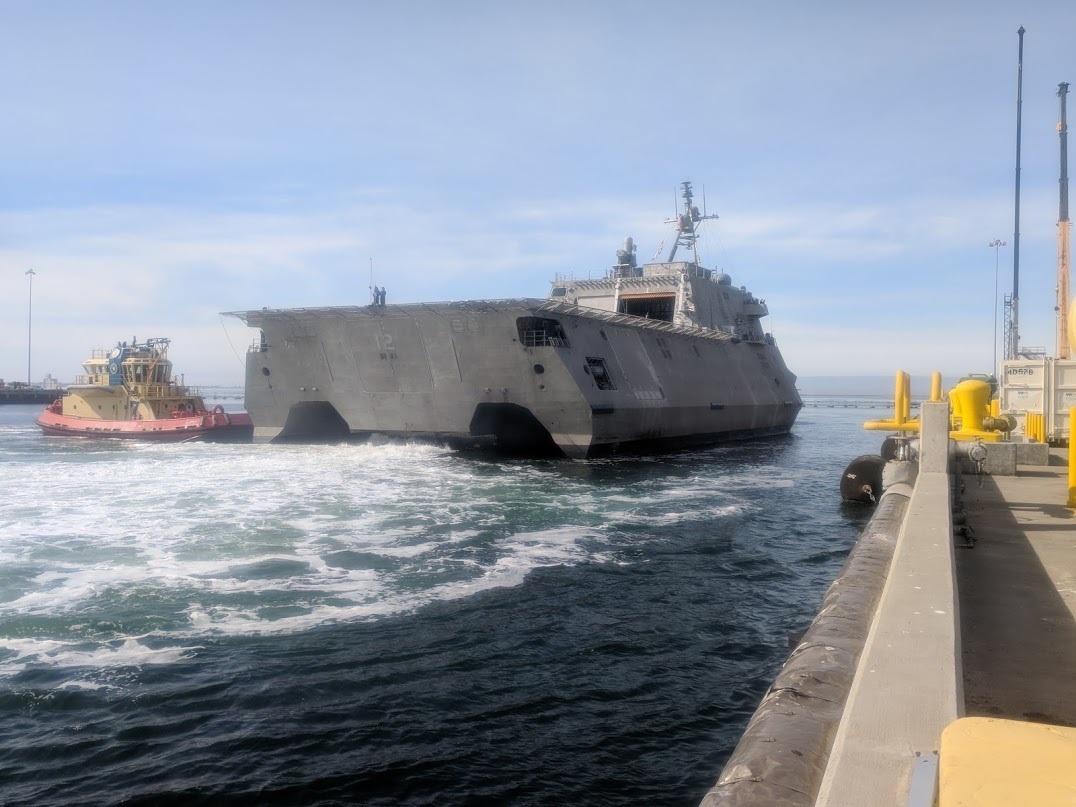 This post has been updated to note that USS Little Rock will arrive in Mayport this week.

NATIONAL HARBOR, Md. – The Navy may not deploy any of its Littoral Combat Ships this year despite previous plans to deploy one to the Middle East and two to Singapore in 2018, due to a confluence of maintenance availabilities that has most of the LCS fleet sidelined this year.

In addition to the deploying ships themselves being in maintenance, so too are the training ships that will be required to help train and certify the crews. The Navy upended its LCS training and manning plans in 2016 when then-SURFOR commander Vice Adm. Tom Rowden announced a change to a blue-gold crewing model and a ship reorganization: hulls 1 through 4 serve in San Diego as a test division, to help test mission module components and get them fielded; the remaining ships are divided into divisions of four ships each, responsible for either surface warfare, mine countermeasures or anti-submarine warfare. Within each division, the first ship has a more experienced crew that is responsible for training and certifying the rest of the crews, and the other three ships are deployable assets. Due to this model, not only does the deployable ship have to be in the water and ready for operations, but so does the training ship.

Previously, the Program Executive Office for Unmanned and Small Combatants (formerly PEO LCS) had told USNI News that the program was preparing to deploy one Lockheed Martin-built Freedom-variant LCS from Mayport, Fla., to Bahrain this year, as the first LCS deployment to U.S. 5th Fleet; and that it was also preparing to send two Austal-built Independence-variant LCSs from San Diego to Singapore, in the first dual-ship deployment to stretch the Navy’s ability to support multiple LCS operations in theater.

Now, the Bahrain deployment has definitely been pushed to 2019. The Navy would not state that the Singapore deployments have been delayed until 2019, but given the task of getting ships through maintenance and then getting the crews trained and certified and ready to deploy, it is unlikely that even one LCS would be able to deploy this year.

“LCS deployments on both coasts are event-based vice time-based. As such, deployments from both coasts will occur when the deploying hulls are fully prepared and the assigned Blue/Gold crews are fully trained and certified,” Perkins told USNI News.
“Training and certification of the Blue/Gold deploying crews require availability of the first LCS Surface Warfare Training Ships on the east and west coasts, respectively. At present, the projected deploying units and their respective training ships are all undergoing their initial Post Shakedown Availabilities (PSAs). Repairs and technical enhancements resulting from the lessons learned during construction of follow-on Freedom and Independence class hulls warranted extended timeframes for these PSAs, ensuring maximum material readiness in support of training, certification, and deployments. The completion of these identified shipyard events will ultimately yield platforms on which training and operations can commence in support of the next set of deployments.”

USNI News understands several things are creating longer-than-intended PSAs for these LCSs. First, the ships now entering PSA are the block-buy ships, which are somewhat different than the first four ships of the class and therefore come with their own set of lessons learned for the maintenance yards. Second, as Perkins said, the ships continue to get new capabilities backfit into them during PSA, which adds time. And third, USNI News understands that, in the aftermath of last year’s fatal destroyer collisions, the Navy is being more diligent than before about ensuring the best possible material condition of ships coming out of maintenance – additional quality assurance steps are being taken, which keeps the ships tied up in the yards a bit longer than before.

Additionally, on the West Coast, where all the Independence-variant ships are homeported, the trimaran hulls require a drydock for virtually any kind of maintenance availability, and the drydocks are in short supply as the Navy faces a high workload in the coming years. 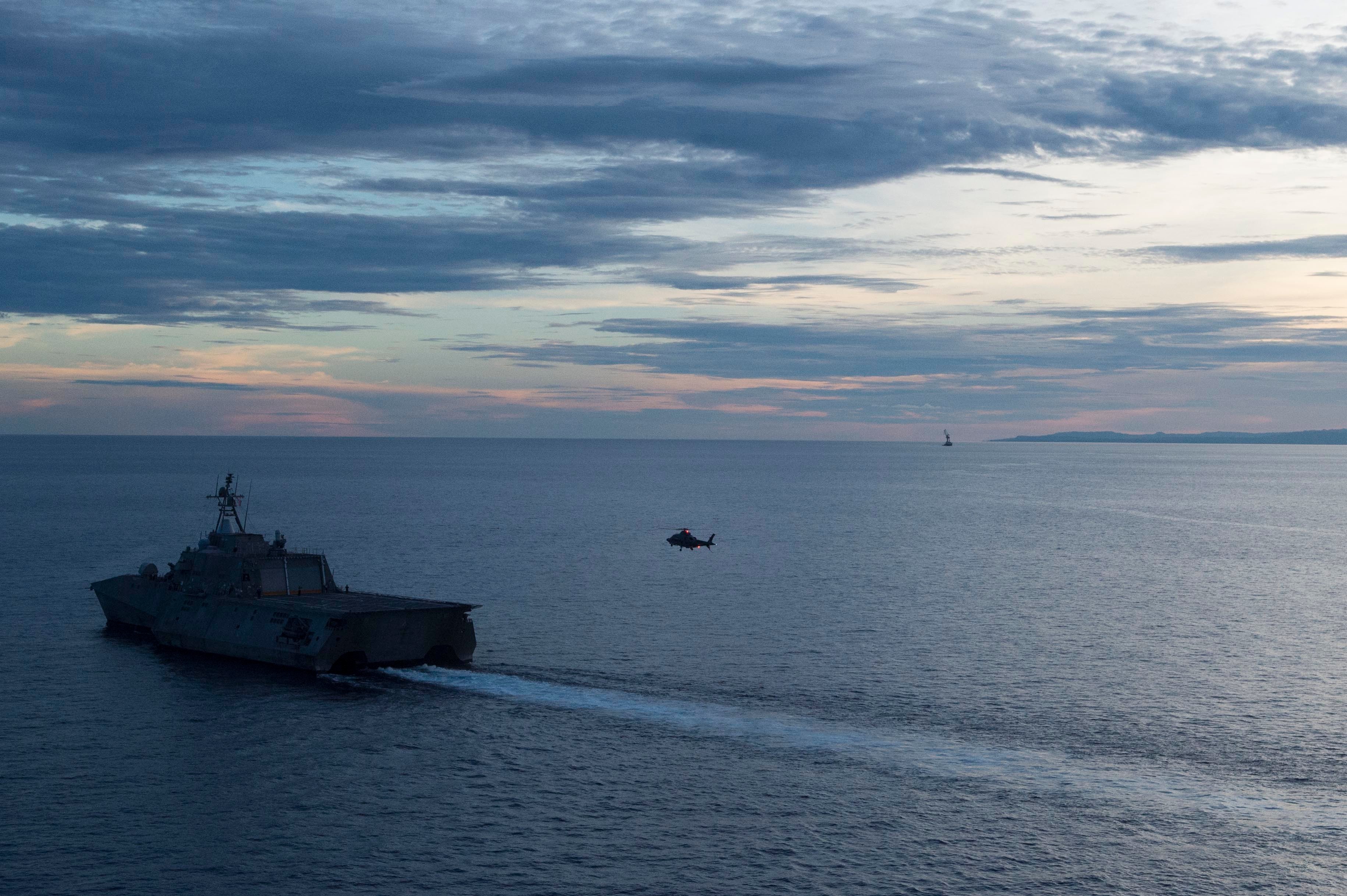 In San Diego, where LCS Squadron 1 (LCSRON-1) is homeported, the first three hulls – USS Freedom (LCS-1), USS Independence (LCS-2) and USS Fort Worth (LCS-3) are in planned maintenance periods, while USS Coronado (LCS-4) is back from the most recent Singapore deployment and available to conduct some Coastal Mine Reconnaissance testing this spring and mine countermeasures mission package testing this summer, LCS Mission Modules Program Manager Capt. Ted Zobel told USNI News this week at the Navy League’s Sea Air Space 2018 symposium.

He added that, in terms of conducting mission package testing on the waterfront, the program is “hoping to loop in 1 through 3 as they come out of their availabilities.”

Milwaukee recently completed its Light Off Assessment, which certifies the engineering plant after a maintenance availability, in this case the ship’s PSA. Sailors are busy training in seamanship and navigation ahead of getting the ship back underway later this month.

Detroit is preparing for its upcoming Light Off Assessment as its PSA wraps up.

Zobel said during a panel discussion at the symposium that Milwaukee will begin testing a Surface-to-Surface Missile Module during the week of April 23, marking the beginning of developmental test for the SSMM. Over the summer, though, the SSMM equipment will be taken off Milwaukee and installed on Detroit, which will continue the developmental test and conduct operational testing beginning in the fall. Zobel said SSMM testing should be completed by December or January, and then the Detroit crew will conduct its predeployment training and certification. About a year from now, Detroit will make its maiden deployment – with the surface missile – to Bahrain.