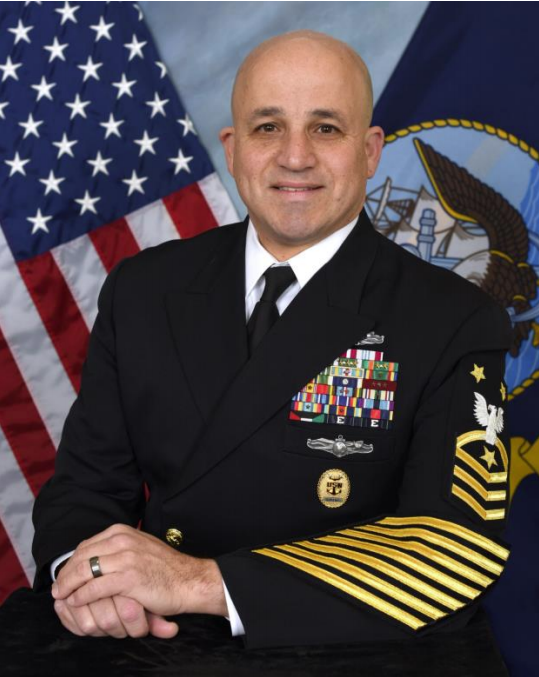 The chief of naval operations assigned Fleet Master Chief Russell Smith to temporarily serve as the Master Chief Petty Officer of the Navy (MCPON) until a permanent replacement can be found for the previous MCPON, who resigned yesterday amid claims he had created a toxic work environment.

Smith will continue serving in his current role as the senior enlisted leader for Manpower, Personnel, Training, and Education, and he will fill in as MCPON until a permanent replacement is found, according to a Navy statement.

“Master Chief Smith is an established leader and I thank him for accepting these important temporary duties until I select a new MCPON,” Chief of Naval Operations Adm. John Richardson said in the statement.
“He will represent our sailors and families well.”

As the Navy’s senior enlisted sailor, the MCPON acts as an advisor to the CNO and Chief of Naval Personnel in matters dealing with enlisted personnel and their families, according to the Navy.

Smith, who joined the Navy 30 years ago this fall, brings a wide breadth of experience from his service in the surface and special warfare communities. Prior to his current assignment with the Chief of Naval Personnel, Smith has previously worked at the defense attaché in Moscow, and has served as the Command Master Chief on the CNO’s staff, for the Office of Naval Intelligence and at the U.S. Naval Academy. He was the first Naval Academy command master chief to be selected for a fleet master chief position, according to the Navy.

Shortly after joining the CNP staff, Smith wrote in the May 2017 issue of Proceedings about the important role chiefs play in guiding their sailors to successful careers. Chiefs need to be examples of their commanding officers’ visions, but Smith added chiefs must be the embodiment of ethical decision-making.

“Authenticity is critical to ensuring our opinions and advice are heard by those in command. Master chiefs have a special responsibility to cultivate these traits, to develop character in our sailors, and—most important—to model good ethics through clear and transparent behavior. Nothing less will do,” Smith wrote.