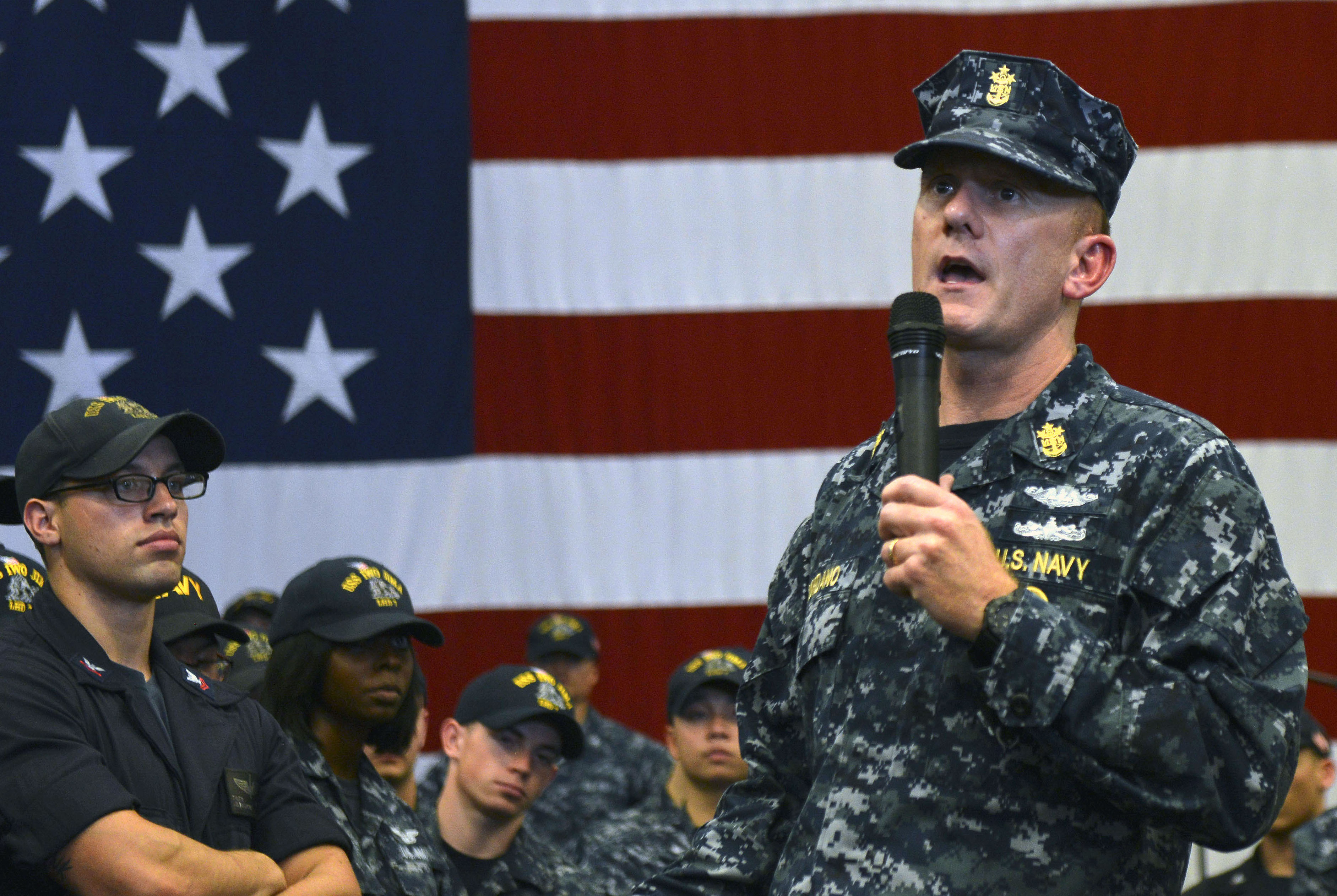 Master Chief Petty Officer of the Navy Steven Giordano announced his retirement amidst a Navy inspector general investigation into alleged workplace misconduct, according to a late Thursday statement.

Earlier in the day, the service said Giordano had taken leave amidst the investigation based on a May 26 complaint that the senior sailor had created a toxic environment for his subordinates.

“I seek to avoid any distraction from the success of our sailors and our mission,” read the statement. “I have informed the Chief of Naval Operations that I intend to step aside and submit my retirement request, in order to allow the CNO, our CPO Mess, and our Sailors to continue to move forward with the initiatives we have begun.”

In a separate Thursday statement on Facebook, CNO Adm. John Richardson said that Giordano’s removal from the position was “effective immediately.”

“I appreciate his recognition that the situation had become untenable,” he said.

The IG received a complaint Giordano created a toxic workplace and belittled subordinates during his time in the position, two sources familiar with the ongoing investigation confirmed to USNI News last week.

“The investigation will continue but is not yet complete,” spokesman Capt. Darryn James told USNI News on Thursday. ” The Navy is awaiting receipt of Master Chief Giordano’s formal retirement request. Master Chief Giordano is currently on personal leave and administratively assigned to the office of the Chief of Naval Personnel. The Navy will begin the selection process for the new Master Chief Petty Officer of the Navy.”

Giordano, the 14th MCPON, has served in the role of the senior enlisted advisor to CNO Richardson since September of 2016.

The following are the complete Thursday statements from Richardson and Giordano.

Team, I have accepted Master Chief Giordano’s offer to step aside as the MCPON effective immediately.
I appreciate his recognition that the situation had become untenable.

Now we need to move forward – together – as a Navy striving with all our energy to become a more lethal fighting force. We’ll continue to demonstrate expertise and character. We’ll continue to strengthen the bonds of trust and confidence within our Navy and with the American people. We’ll continue to act with integrity, accountability, initiative and toughness. America expects no less.

In doing so, we’ll be able to overpower any enemy that would take us on.

Let’s get to it

Let me start this by saying thank you. Thank you for allowing us the privilege and the honor to serve. My family and I have felt extremely blessed to have had you in our lives over the 29 years. My love for our Navy and our Sailors is absolute. For that reason, I seek to avoid any distraction from the success of our Sailors and our mission. I have informed the Chief of Naval Operations that I intend to step aside and submit my retirement request, in order to allow the CNO, our CPO Mess, and our Sailors to continue to move forward with the initiatives we have begun. The success of our Navy is not about one person or one individual, but rather the collective fighting spirit that has defined us over the last 242 years. It has been an honor to have been part of that team.

To the Leadership Mess and all Chief Petty Officers, I want all of you to know how extremely proud I am of the tremendous progress you have made leading our Navy forward. From day one, we challenged one another to communicate more across the horizontal and vertical playing fields. This meant we needed to be open to listening to one another and offering sound mentorship and advocacy in the best interest of our entire Navy. We also challenged one another to become more self-aware. We have learned from each other and about ourselves over the last year through readings and exercises. Things we have since used to make our organizations better at every level. Led by Fleet Master Chiefs, and supported by many of you. Today, our Navy, our Sailors, our Chief Petty Officers are more empowered, reinvigorated and owning their environments as a result of these efforts.

This has everything to do with your leadership! My role was to continue to ensure you were provided opportunities to bring the issues forward and the space to go after them. Some of the proudest moments were watching you in action speaking with the Secretary of the Navy, Chief of Naval Operations and Vice Chief of Naval Operations and driving action for change that positively affected our Sailors’ lives. Knowing change is hard, you led the way on Laying the Keel, a system focused on stronger investment in deliberate enlisted leader development. Over this year-long effort and through much research, analysis, and direct feedback from our Sailors, you have put forward a strategy that will positively influence how we develop enlisted leaders across all paygrades for many years to come. Be proud of this accomplishment. I am.

Your support throughout numerous engagements with our Sailors has also led to meaningful changes at RTC, a refocus on technical competency and changes to advancement and selection board processes, improved fleet manning and logistics, removal of administrative distractions and reduction in collateral duties, improving child care and spouse employment initiatives, and our currently piloted evaluation system with focus on usable feedback. You have all demonstrated how a powerfully committed and focused group of Senior Enlisted Leaders can make lasting and positive change for our Navy.

To our Sailors, keep leading yourself, your families and our Navy as authentic, competent and courageous people. Elka and I leave secure in knowing that you have the watch. We are honored to have served alongside each of you. Our Navy is in the best of hands. God bless you, your families, and our entire Navy.

Sincerely and with the greatest respect and admiration,