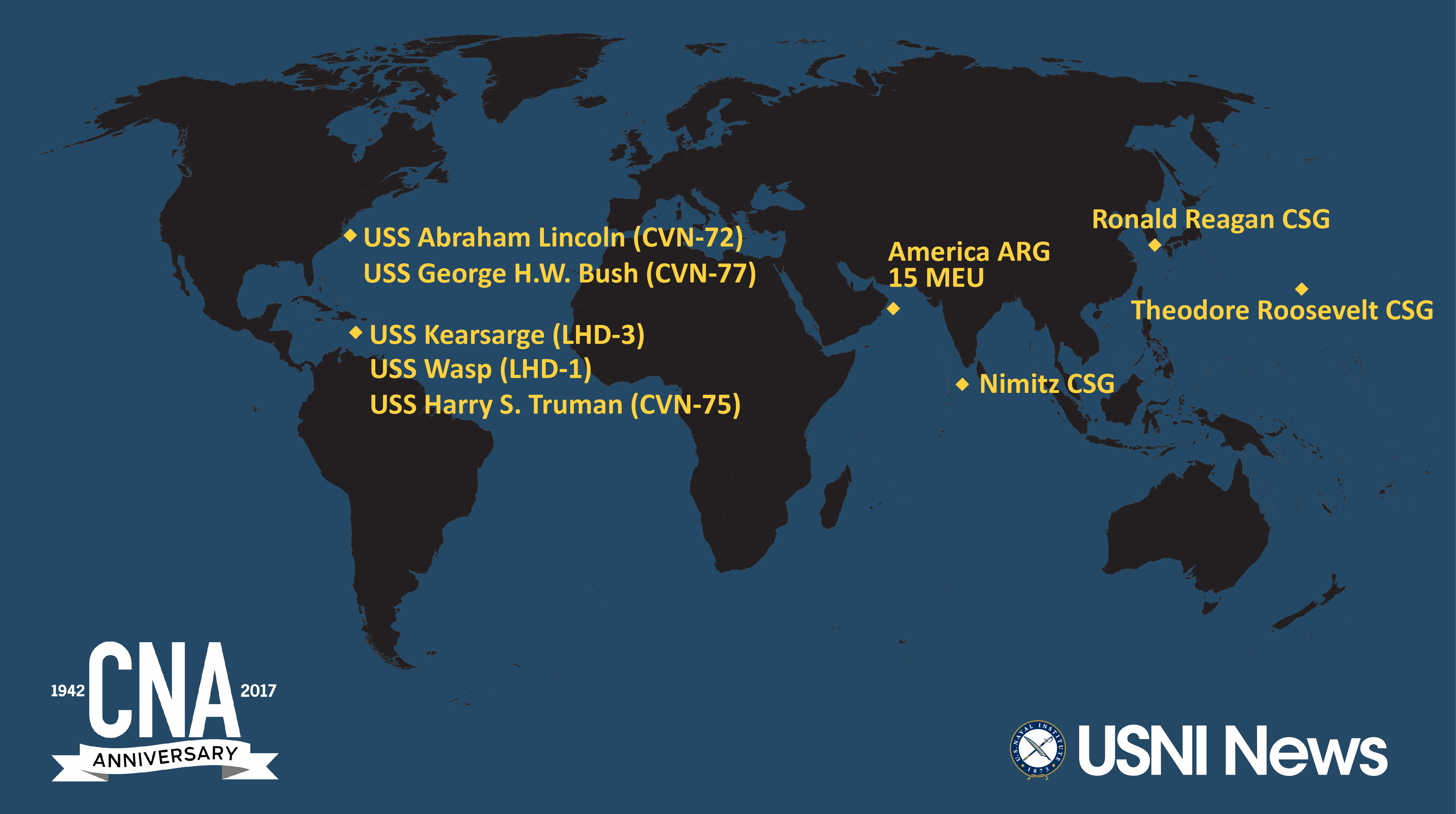 The USNI News Fleet and Marine Tracker is sponsored by CNA.
These are the approximate positions of the U.S. Navy’s deployed carrier strike groups and amphibious ready groups throughout the world as of Oct. 26, 2017, based on Navy and public data. In cases where a CSG or ARG is conducting disaggregated operations, the map reflects the location of the capital ship. 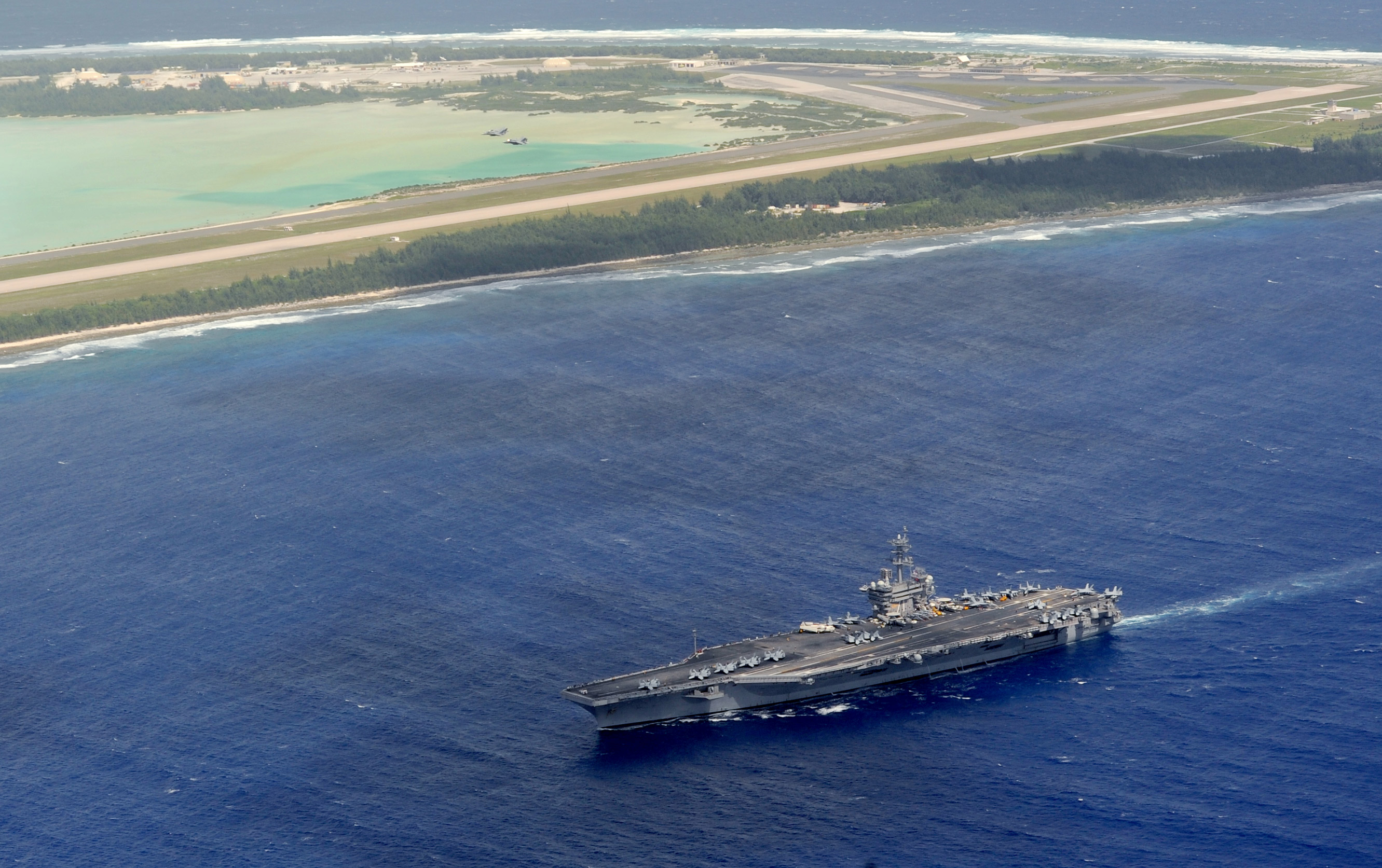 The Theodore Roosevelt Carrier Strike Group entered the U.S. 7th Fleet area of responsibility on Oct. 24. The ship conducted air operations near the U.S. holding of Wake Island on Oct. 26, according to the service.

About 7,500 sailors and Marines with the Theodore Roosevelt CSG departed Oct. 7 from San Diego, Calif., for a scheduled deployment to the Western Pacific and the Middle East.

The Roosevelt CSG is expected to resume U.S. carrier-launched strikes as part of Operation Inherent Resolve when it arrives in the Middle East.

There are reports the Roosevelt CSG could conduct dual-carrier operations off of the Korean Peninsula with the Ronald Reagan CSG. The forward-deployed Reagan Strike Group recently completed operations with Republic of Korea forces in a series of multi-national exercises. 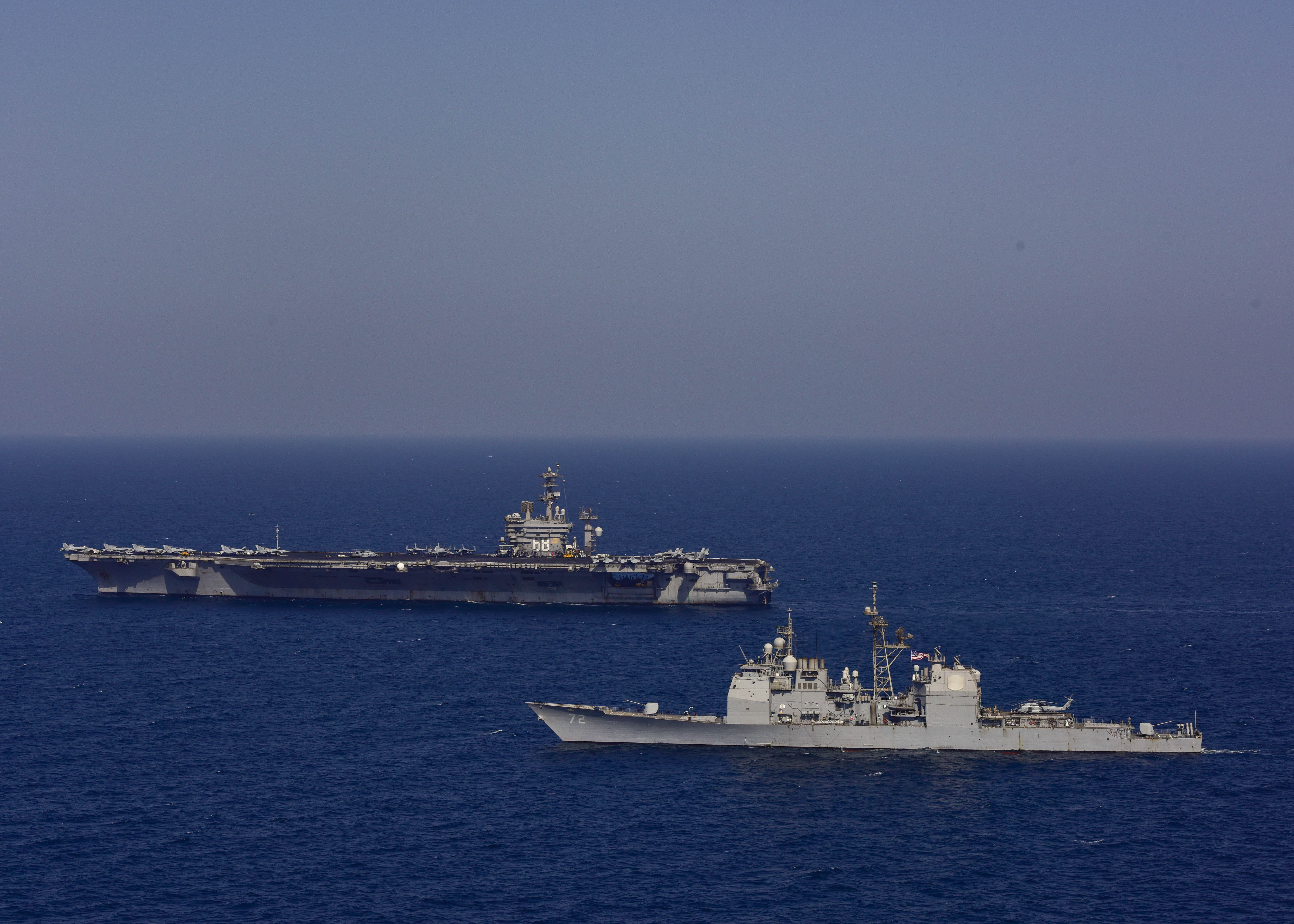 USS Nimitz (CVN-68) and the Ticonderoga-class guided-missile cruiser USS Vella Gulf (CG -2) patrol alongside each other, Oct. 20, 2017. US Navy Photo

On Oct. 25, the strike group crossed the border between Pakistan and India in the Arabian Sea, according to the service, putting it into the 7th Fleet AOR.

It’s yet unclear if Nimitz CSG will conduct operations with the two other carrier strike groups in 7th Fleet.

The deployments of all three strike groups comes a week ahead of President Donald Trumps visit to Asia with visits planned to China, Vietnam, Japan, the Philippines and South Korea. Trump departs the U.S. on Nov. 3. 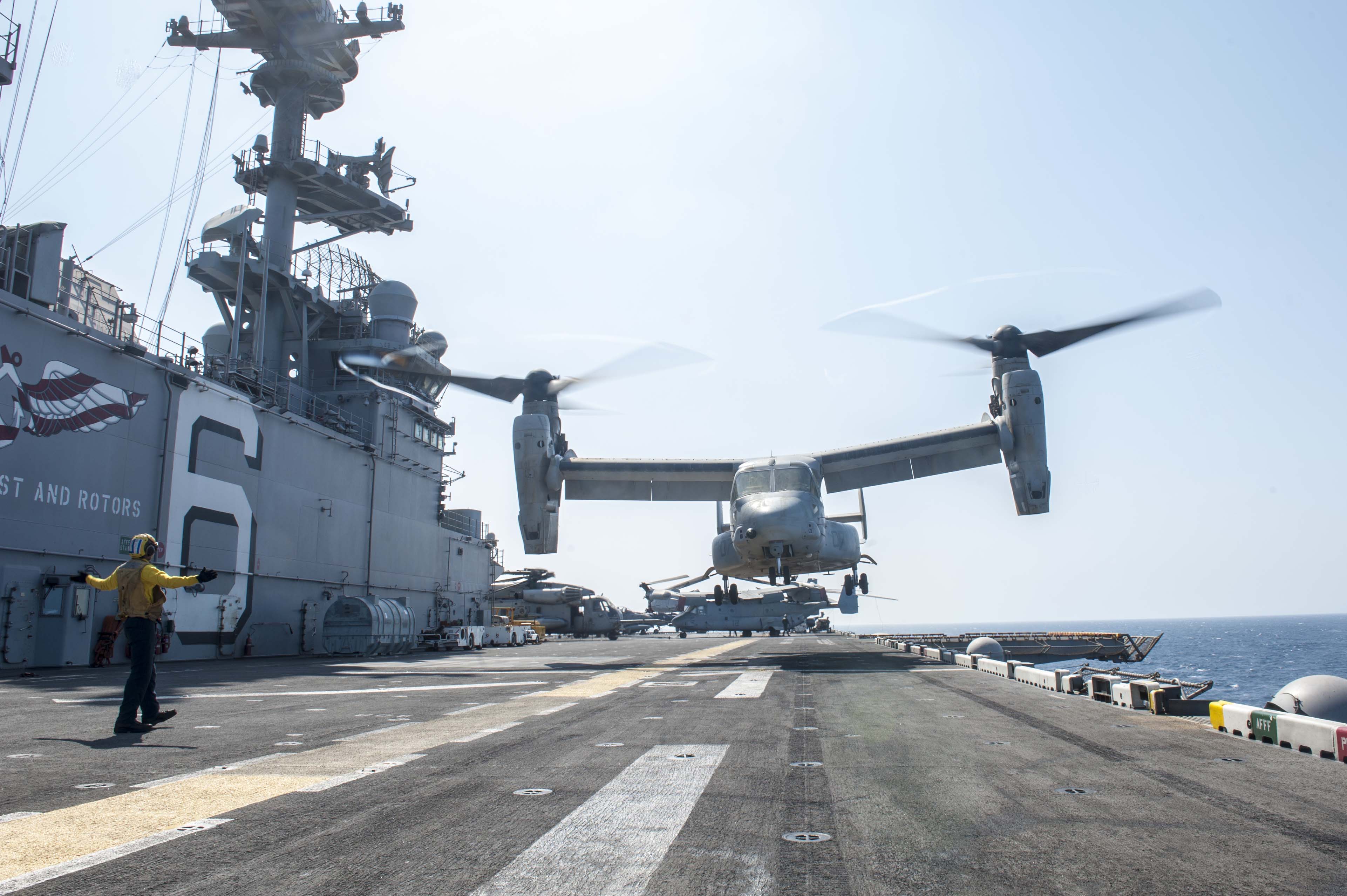 Other ARG units are participating in Exercise Iron Magic 18, a military exercise between the UAE Armed Forces and U.S. forces that started last week in the UAE. 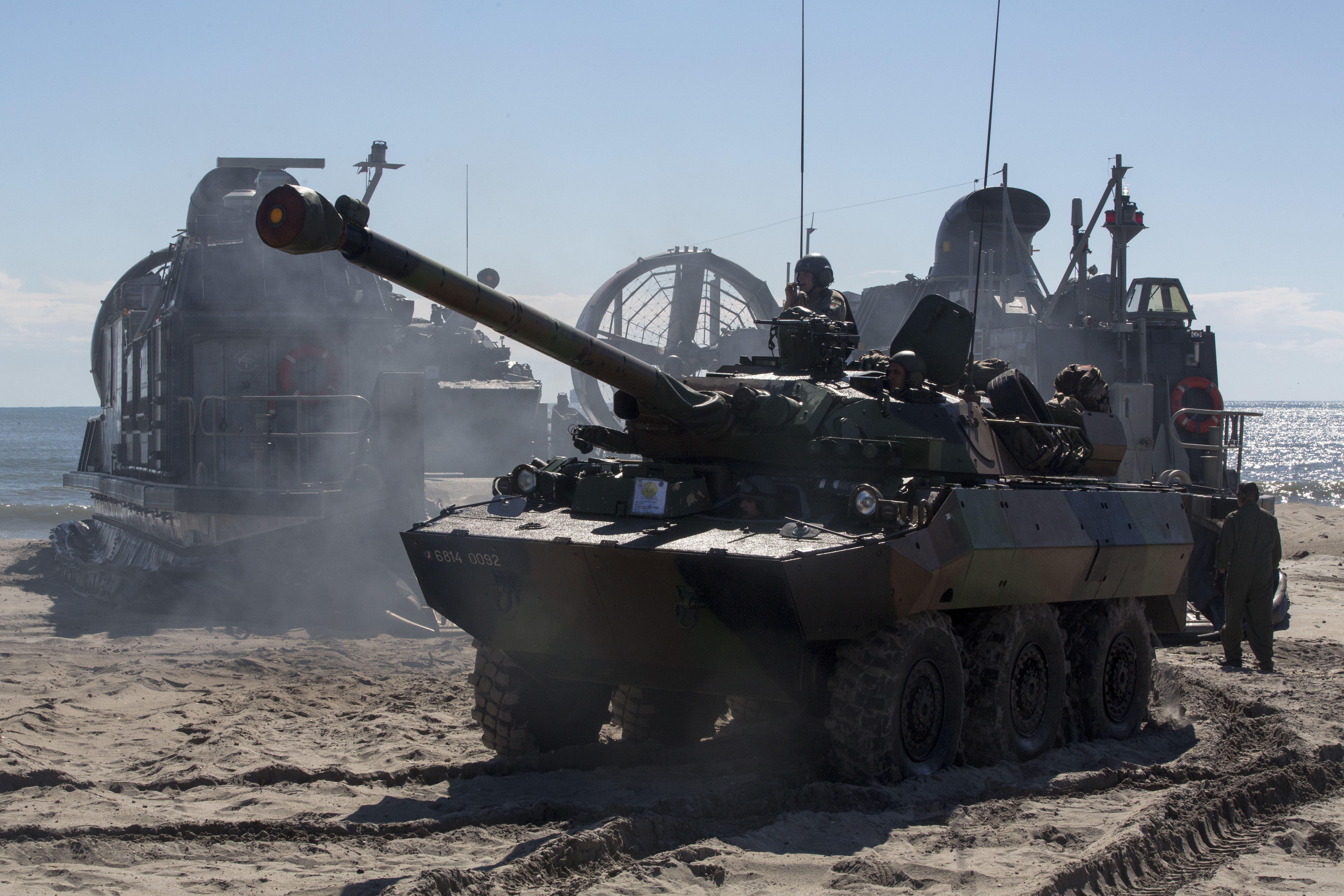 Amphibious exercise Bold Alligator 17 continues off the coast of North Carolina, though smaller in scale this year due to many of the exercise’s planned participants still conducting hurricane response efforts in the Caribbean.

USS Harry S. Truman (CVN-75) is underway in the Fleet operations areas off of Norfolk, Va., conducting a Tailored Ship’s Training Availability (TSTA). This is the final step in the crew’s individual ship training and culminates in a Final Evaluation Problem (FEP). The next underway phase of Truman‘s training will include other ships as the carrier continues deployment work-up.

“Their principal contribution to the hurricane relief effort has been helicopter support. FEMA and DoD have determined there are sufficient land-based helicopters and tilt-rotor lift capabilities in the territories to continue helping the people of Puerto Rico and the U.S. Virgin Islands as they recover,” read a Thursday statement from the Pentagon. 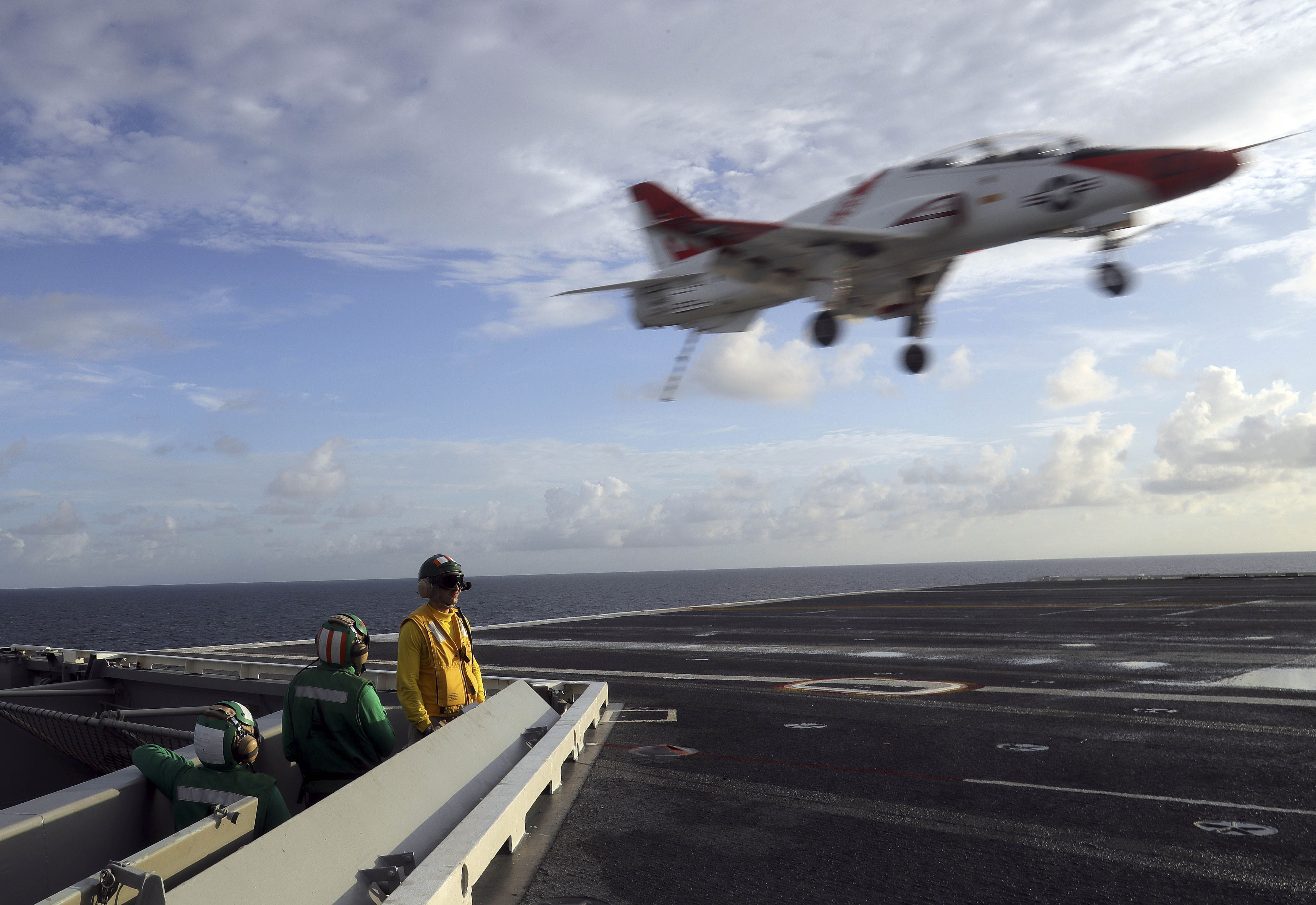 Wasp is bound for Japan to join the forward deployed naval forces to be the first amphibious warship to deploy with the F-35B Lighting II Joint Strike Fighter.

Marines of the 24th MEU and Seabees from Amphibious Construction Battalion 2, continue to support the humanitarian relief efforts for Hurricanes Irma and Maria in Puerto Rico.