A Monday test pairing a Lockheed Martin F-35B Lighting II Joint Strike Fighter (JSF) with an Aegis Combat System armed with a Raytheon Standard Missile-6 is the latest step in expanding how the Navy and Marine Corps will share data on future battlefields.

“The way I’d describe it was a center of mass hit,” said Dana Potts with Lockheed Martin said in a Tuesday conference call with reporters.
“It absolutely disintegrated the target.”

The unmodified F-35 picked up the target with its own sensors and routed the track via the fighter’s Multifunction Advanced Data Link (MADL pronounced: MAHdel) to the Navy’s USS Desert Ship (LLS-1) test platform running the Baseline 9 Aegis Combat System. Lockheed and the Navy attached a MADL antenna to the combat system to receive the track information that fed the information to the SM-6.

The test is an expansion of the Navy’s Naval Integrated Fire Control-Counter Air concept (NIFC-CA) – a scheme designed to tie together data from the ships and aircraft in a carrier strike group to create a network of sensors and shooters – a proverbial kill web.

For example, targeting data collected from a Northrop Grumman E-2D Advanced Hawkeye can be beamed to a guided missile cruiser or destroyer in the strike group. That ship could then launch an SM-6 at the target only using the E-2s track and not its own radar.

For now, the E-2D remains the key node in the NIFC-CA program-of-record acting as the quarterback for the carrier’s air war but Monday’s test shows the Navy the art of the possible, said Anant Patel, major program manager for future combat systems in the Program Executive Office for Integrated Warfare Systems (PEO IWS) said in the conference call.

“This was a demonstration to show that within the NIFC-CA architecture we can add another sensor. As long as it meets the quality of service, we can engage the target,” Patel said.
“We have F-18s, F-35s all of those sensors we have to consider and that’s a future effort we’re going to have to do as part of our NIFC-CA capability growth.”

The addition of the MADL to the mix of the program of record links NIFC-CA now uses – like Cooperative Engagement Capability (CEC) and Link-16 – the test is a move away from a carrier-centric construct. 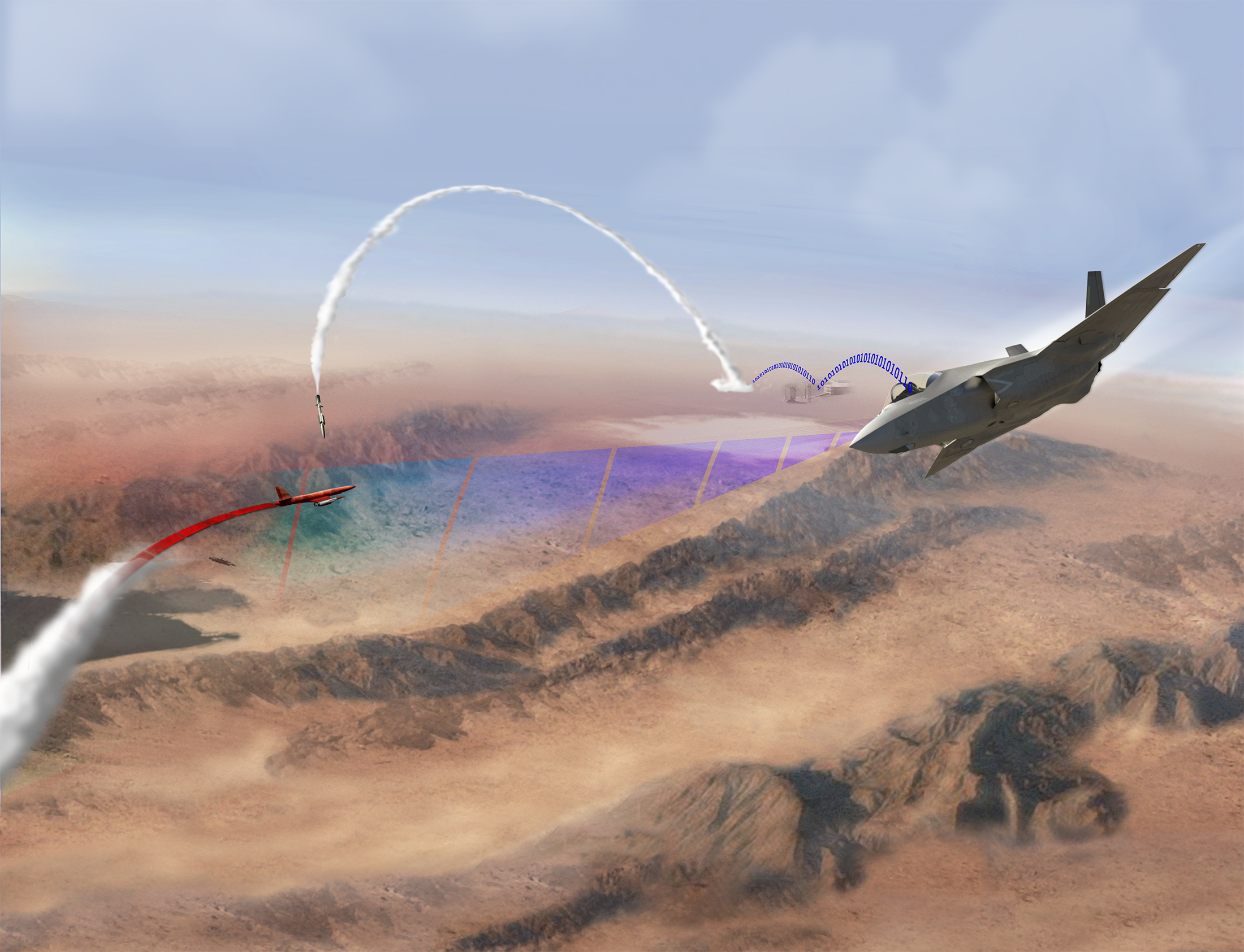 An artist’s conception of the F-35 test. Lockheed Martin Image

While the F-35 is billed and branded as a strike fighter, it also possesses a little discussed electronic warfare capability that gives it an exceptional awareness of its surroundings.

To that end NIFC-CA has included F-35 as a planned sensor node in carrier strike group model – acting as a stealthy forward arm but that would route targeting information back to the CSG through the E-2, USNI News reported in 2014.

However, using MADL direct to the Aegis ships weren’t part of the plan.

The difficult to detect and intercept MADL was designed for F-35s to talk to F-35s and not intended to share information beyond other JSFs, Bran Clark, a retired Navy officer, the former special assistant to the Chief of Naval Operations (CNO) and now a senior fellow at CSBA, told USNI News on Tuesday.

“Originally we didn’t think F-35s would use through datalinks directly to ships… This gives them the ability to talk directly to the ship with a very hard to detect very hard to jam MADL link,” Clark said.

Lockheed began studying routing the MADL data out from the JSF loop in 2013 with $15 million in internal funds before winning approval from the Navy’s chief weapons buyer, Sean Stackley, Potts said.

Last year, a Lockheed Skunk Works, Aegis, F-35 technical team did tests at Lockheed’s JSF plant in Fort Worth, Texas last year to pull MADL data to a ground station that would represent the link to a Baseline 9 cruiser or destroyer, Potts said.

“It was absolutely breathtaking, the Aegis display in our labs as soon as [the test F-35] turned his radar on looking north… He picked up the conga line, if you will of aircraft going into [Dallas Fort Worth Airport],” he said.
“The display just exploded with hundreds of ranged tracks, so we knew it would work.”
However, the fact linking the F-35s powerful EW suite was such is such a late addition to NIFC-CA is an “indictment of the original planning process that lead to the F-35,” Clark said.

In addition to the Navy’s F-35Cs and Marine Corps F-35Bs, the Air Force’s F-35As will be able to share its air tracks with a Baseline 9 ship.

“Eventually when we start linking everything that’s relevant on the airplane off to the ship to a ground base, the commanders are going to be able to see and understand the battle space in a much more robust way,” Potts said.

For example, a direct link to a Baseline 9 cruiser or destroyer from a Marine F-35B operating as part of an amphibious ready group could open up the air defense possibilities for the ARG, allowing SM-6 cueing for air threats.

Japan, South Korea and Australia are not only acquiring F-35s but also other key nodes the U.S. uses for NIFC-CA. The South Korean Navy and the Japanese Maritime Self Defense Force are buying ships with the Baseline 9 backbone for NIFC-CA. Japan is also buying E-2Ds and Australia has purchased EA-18G Growler electronic warfare aircraft that are already part of a U.S. NIFC-CA construct.

“From our perspective, they just have the aircraft but we have the entire combat systems, Aegis and SSDS (Ship Self-Defense System), so how do we integrate all that into overall Navy?” Patel told USNI News in June.
“And then you look at what threat sets you’re going after, they have different requirements and we have separate requirements, so basically understanding each other, what are the requirements, what the capabilities are, where are we today, what are our plans for the future, and then how do we consolidate?”
In terms of the future of the NIFC-CA construct, NAVSEA said there are several other opportunities to explore to expand the network.

“The more sensors, the better off we are,” Patel said on Tuesday.