Navy engineers are working to bring new aircraft sensors and new weapons into the Naval Integrated Fire Control-Counter Air (NIFC-CA) architecture, with near-term goals of bringing in the F-35’s radio frequency (RF) sensor and the anti-surface variant of the Standard Missile-6.

In a January test, the Navy proved that the new SM-6 Block I anti-surface missile worked, but it also proved that NIFC-CA – which, as its name implies, was engineered to go after fast-moving air threats – could be adjusted to counter surface threats too.

Whereas a normal NIFC-CA anti-air engagement might use an E-2D Advanced Hawkeye as the sensor that finds a target and then use the Cooperative Engagement Capability (CEC) as the link to bring targeting data to the ship that ultimately fires a weapon, the anti-surface technology demonstration required some modifications. A different sensor was needed to identify surface targets, and that sensor could not use CEC, meaning the whole engagement relied instead on Link-16, Anant Patel, major program manager for future combat systems in the Program Executive Office for Integrated Warfare Systems, told USNI News in an interview this month.

Patel did not name the sensor used in the demonstration, but the Navy’s P-8A Poseidon, which is equipped with Link-16, or eventually the unmanned MQ-4C Triton would be ideally suited for the job. Patel said NIFC-CA is sensor-agnostic, as long as the sensor meets quality of service standards. But finding weapons that can hit large but slow-moving targets has its challenges.

“When things go slower, it’s easier” to track them, he said.
“But it has its own complexity also. Some of our weapons are not designed to look for slow targets, so we have to do some analysis and make sure we capture that. Also, if you look at SM-6, it’s more an anti-air weapon, so the capability’s designed to counter fast-moving targets, and then to go against this slow-moving target we had to make sure we can meet that requirement.”

Some minor modifications were made to the Aegis Combat System Baseline 9 to accept the data from the new sensor, but Patel said the culmination of this work – a test in January at the Pacific Missile Range Facility in Hawaii – was a successful hit against a surface target, the decommissioned frigate Reuben James (FFG-57). This success is an early step in fielding a bigger All Domain Offensive Surface Warfare Capability. 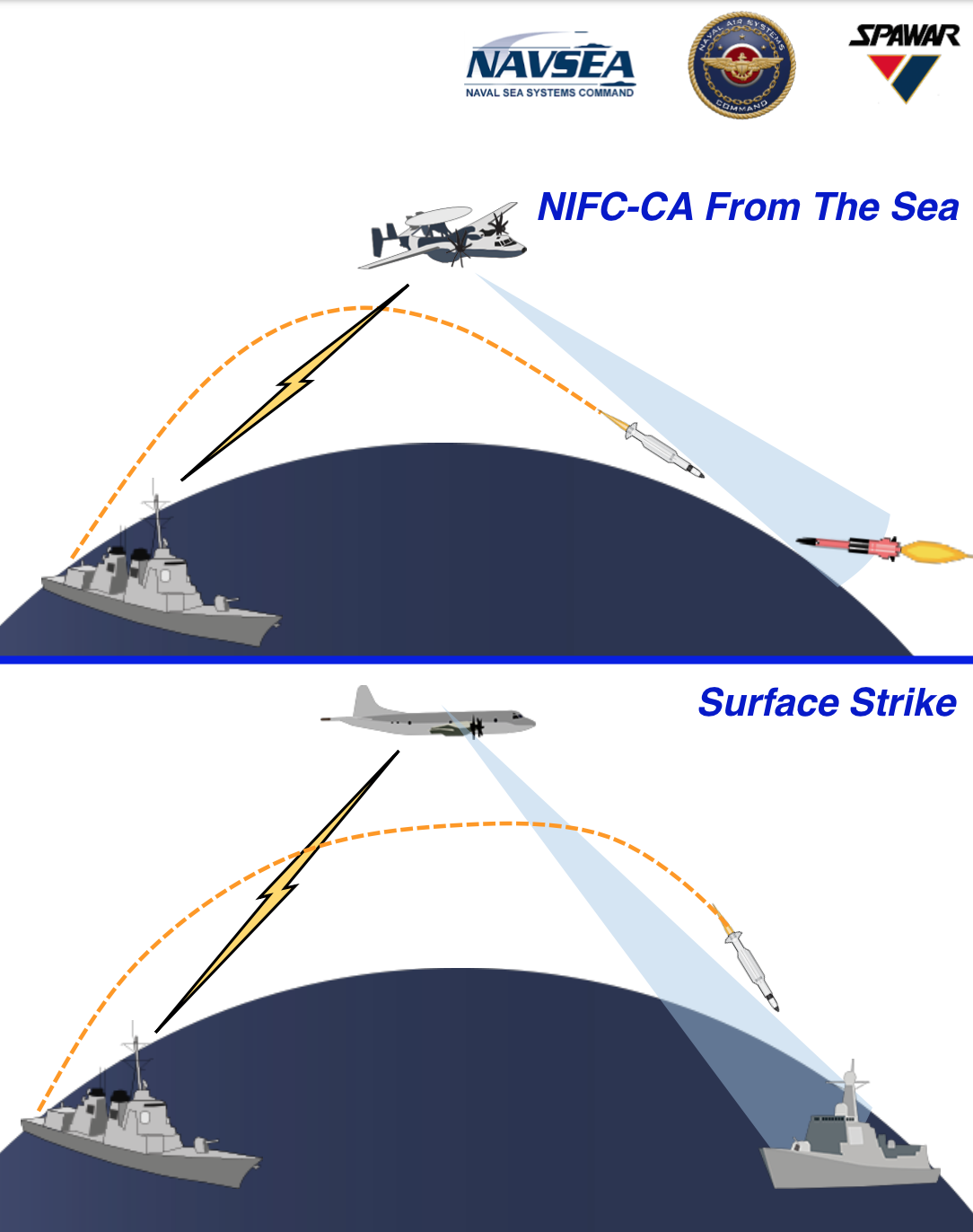 An image from a PEO IWS PowerPoint presentation.

Another challenge in bringing new weapons into NIFC-CA is that now Naval Sea Systems Command (NAVSEA) and PEO IWS will have to coordinate with Naval Air Systems Command (NAVAIR) and its PEO for Unmanned Aviation and Strike Weapons – NAVSEA owns NIFC-CA and SM-6 but NAVAIR owns the rest of the anti-surface weapons in the inventory.

Patel said NAVSEA and NAVAIR have been in talks for about two months on how to work together.

“From our perspective, they just have the aircraft but we have the entire combat systems, Aegis and SSDS (Ship Self-Defense System), so how do we integrate all that into overall Navy?” he said.
“And then you look at what threat sets you’re going after, they have different requirements and we have separate requirements, so basically understanding each other, what are the requirements, what the capabilities are, where are we today, what are our plans for the future, and then how do we consolidate?”

Patel said that by this fall the two organizations should have a path forward for how to collaborate in engineering, testing and fielding this kill web idea. As new weapons are developed in the future, it should be easier to design them with this collaborative kill web in mind.

Patel said the Navy is also expanding NIFC-CA by introducing more sensors, specifically the F-35. NIFC-CA today primarily relies on the E-2D, which are limited in number. The F-35 will be fielded in great numbers by countries around the world, so the Navy is eager to prove out the NIFC-CA/F-35 combo.

The Navy will conduct a live-fire test in September at White Sands Missile Range in New Mexico, where an F-35 will detect an over-the-horizon threat with its RF sensor and send data back to the USS Desert Ship (LLS-1) land-based ship simulator, which will then launch an SM-6 to intercept the threat.

“It’s no different than E-2D,” Patel said – except that the sensor will be new to NIFC-CA, as will the Mid Air Data Link (MADL) that was developed for F-35s to communicate with one another. The test will assess the Navy’s ability to take unrelated technologies and successfully close the fire control loop.

Patel added that the F-35 brings significant capability to the fleet, but his office is only funded to look at the RF sensor for now. Many of its other sensors could be integrated into NIFC-CA if additional funds were appropriated.