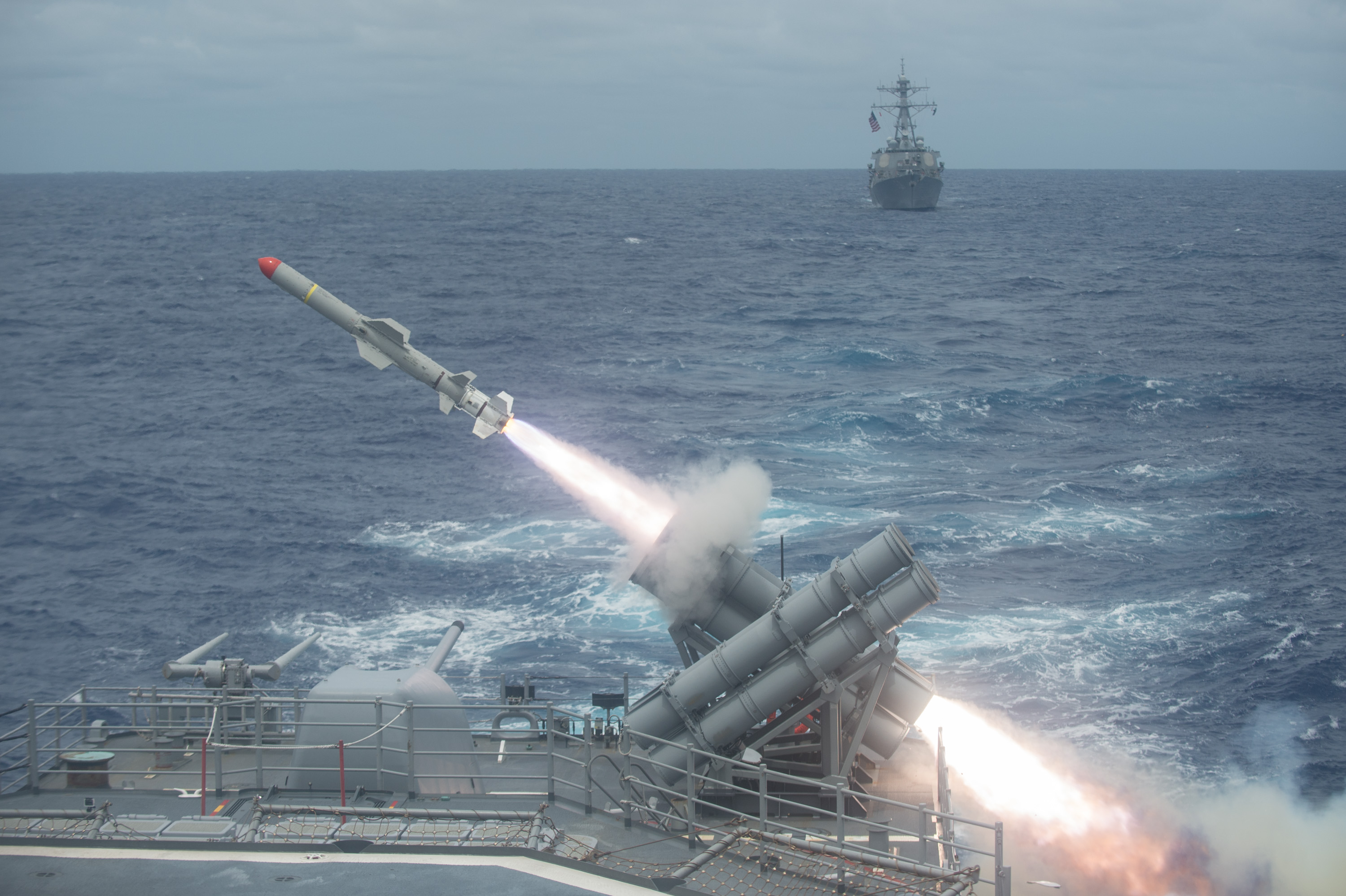 A Harpoon anti-surface missile is launched from the Ticonderoga-class guided-missile cruiser USS Shiloh (CG-67) in 2014. US Navy Photo

NATIONAL HARBOR, Md. — The Navy is creating an offensive anti-surface network that will tie targeting information from satellites, aircraft, ships, submarines and the weapons themselves to form a lethal “kill web” designed to keep pace with the expanding lethal power of potential adversaries, service officials outlined on Tuesday.

The scheme will use information ranging from sensors in space to the undersea to share information in a so-called tactical cloud that will allow aircraft and ships to access a range of targeting information to launch weapons against surface targets, said Rear Adm. Mark Darrah, at the service’s program executive officer for Strike Weapons and Unmanned Aviation at the Naval Air Systems Command (NAVAIR), in a presentation at Navy League’s Sea-Air-Space Exposition 2016.

The concept is a direct response the increased sophistication of adversary networked sensor systems.

The scheme will allow the Navy to increase the effective ranges of their own weapons against surface targets.

The effort is being worked by Darrah’s office and PEO Integrated Warfare Systems in conjunction with the Office of the Chief of Naval Operations and is slated to deploy in some form later this year, said Rear Adm. Jon Hill, PEO IWS on Tuesday.

“How do you bring in sensor data, how do you connect that to the weapon, how do you control it to make sure that you’ve got precision engagement?” Hill said.
“That has been tested and it will be ready to deploy later this year, we’re pretty excited about that.”

NAVAIR’s Darrah walked through an anti-surface scenario with information shared via the tactical cloud in which military space assets – known as National Technical Means — share data with aircraft like F/A-18s fighters, E-2D sensor aircraft and the unmanned MQ-4C Triton. In the scenario data was combined with surface ship information from a Littoral Combat Ship and an attack submarine that also feed into the tactical cloud.

“The important part is that the nodes are able to move in and out of this kill web over the time we’re prosecuting this threat,” Darrah said.
“What you got now is a thread that’s been run through a multitude of sensors. The important piece of these is they are nodes within domains. I can replace an F-18 with a Harpoon with a JSF and another weapon [in the future]. That’s the important piece. This is about [being] role based. Role-based means I don’t care what the platform is, what I care about is the sensor that generates the information.”

The anti-surface scheme is similar to the carrier strike group Naval Integrated Fire Control-Counter Air (NIFC-CA) concept in which aircraft and ships in the strike group share their targeting information on aircraft and cruise missile threats via high-capacity data links to other ships and aircraft that might be out of sensor but not weapons range of a target. For example, an E-2D could provide targeting information on an enemy fighter to an Arleigh Burke guided missile destroyer that is unable to see the threat with its own radar.

“Using tactical data links is absolutely fine in this architecture, and that’s what we’ve used to go off and sink surface ships in another version of NIFC-CA,” Hill said on Tuesday.

While the concept shows promise, Darrah said there are long-term challenges to determine what data is relevant for units using the tactical cloud.

“We’re going to put data up in the cloud and users are going to go grab it and use it as a contributor to a targeting solution [but] what’s the pedigree of the data?” he said.
“Who generated it? How long has it been since it’s been refreshed? Is it actually a fidelity that’s meaningful to my weapon?”

Part of the solution to the problem will be building tools to allow users of the cloud to sort through the data.

“We have to figure that out,” he said.